When raising money the old-fashioned way just won’t do.

Jacqueline Smoot, of Broken Arrow, Okla., had just gotten home from work when her miniature border collie, Mitzy, dashed out the front door. In no time, Mitzy was around the corner and in a neighbor’s chicken coop, feathers everywhere. Animal Control cited Smoot for “harboring a vicious animal’’ and “animal at large” after Mitzy had apparently attacked the chickens.

About a month later, a judge fined Smoot $658. Smoot, a portrait photographer at J.C. Penney, said she didn’t have that kind of money. So she and the judge agreed to a $50-a-month payment plan. For Smoot, even that was going to be a lot.

When she missed a payment by more than a week, the court clerk said she couldn’t continue with the plan. She could pay $533 or earn $25 per day towards the fine by sitting it out in jail. The court had already issued a warrant for her arrest.

That’s when Smoot, responding to friends’s suggestions, decided her only hope was to pass the hat — online. She logged onto the crowdfunding site GoFundMe and wrote this plea: “I'm a single mom and have a job i have to be at not getting any help please anything will help thank you and god bless.”

Crowdfunding — once the province of people trying to raise money for things like trendy coffee makers, classroom supplies, or medical treatments — has become a tool for dealing with the criminal justice system. It’s not uncommon to find requests for bail money, legal fees, fines, or even to underwrite payments for expert witnesses at trial.

With varying levels of success, crowdfunders write up their stories and share them online with friends, family, and strangers through social media, hoping to raise hundreds or thousands of dollars. At the same time, some of these pleas have come from people accused of breaking the law, challenging the tolerance of crowdfunding sites.

Liz Gerber, a professor of design at Northwestern University who studies crowdfunding, notes that there’s nothing new in trying to raise money for a cause, but that the Internet “allows for who, and how, and when we can ask people for money.”

Some have surprising success. Shawn Johnson, a 27-year-old Army veteran, raised $2,000 in under a week to pay off a DUI fine. Though he says he knew everyone who contributed, some donors surprised him. A DJ at a club where he once worked gave $150. “I know the guy. I’ve talked to the guy, but I didn’t think we were close like that,” Johnson says. Women he knows in Portugal and Australia contributed, too. “Just knowing people want to help is amazing,” Johnson commented on his page. “I am truly moved.”

Some crowdfunding pages have actually gone viral. An Indiegogo fundraiser for Bree Newsome, the woman who pulled down the Confederate flag in front of the South Carolina State House this year, took in $125,705 toward bail and legal defense for her and other Black Lives Matter activists. One campaign run by Benjamin Crump, the lawyer for the family of Michael Brown, the young man shot to death by a police officer in Ferguson, Mo., last year, raised $316,194 for the family in just three weeks after his death.

Other pleas go nowhere, in part because the fundraiser’s community is also poor, and because the campaigns get little meaningful attention from strangers. In Oregon, Vanessa Buck is trying to raise at least $2,500 to hire a lawyer for her brother, who was arrested in mid-October and charged wtih stealing a marijuana plant from a woman’s yard and pointing a gun in her face. She has raised only $530 so far, all of which has come from friends and family. One of the reasons she started a crowdfunding page was to allow donors to use credit cards. They don’t have cash, she said, but they’re willing to go a little further into credit card debt to contribute.

Smoot’s campaign to pay off her fine has been shared 51 times. She hasn’t raised a dollar and is still subject to arrest. 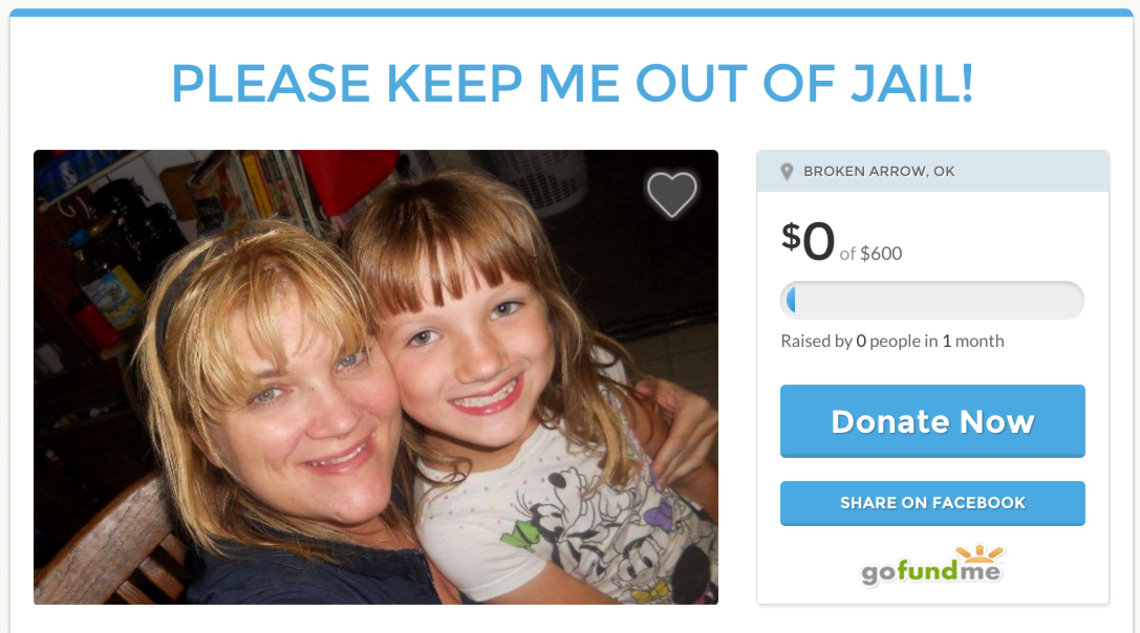 Why would anyone give to a crowdfunding campaign? When there’s no incentive attached — like a T-shirt, a coffee mug or a tote bag — people tend to donate because they value the cause or the person, Gerber said. “Either ‘I have a family member who is in a similar situation as this cause’ or ‘this is my neighbor asking me for money.’”

But just putting up a page may not be enough, she explains. In order to be successful, crowdfunders must establish credibility. Many spend months building up a network, creating videos, and raising initial cash, before launching the page. It’s not uncommon for crowdfunders to put in some of their own money at the beginning, to make it seem as if others have invested.

Justin McShane, a Harrisburg, Pa., criminal defense lawyer, needed money to pay experts in a wrongful conviction case he had taken on pro bono. So, he set up a website, contacted local and national media, and created a GoFundMe page. The page helped legitimize the campaign and gave people a safe place to enter a credit card number, he says. He pulled in $8,475 online (and about $5,000 offline). Some experts donated their time, too. This saved McShane from having to pay for experts out of pocket. But in the end, he got only a few donations from strangers; most contributions came from friends and colleagues.

Some major crowdfunding sites have resisted hosting campaigns that raise money for legal fees in specific, controversial cases. In April, Indiegogo shuttered a page that was fundraising legal fees for Michael Slager, the North Charleston, S.C., police officer who shot a man in the back and killed him as he ran from a routine traffic stop. "[O]ur Trust & Safety team regularly conducts verifications and checks and this campaign did not meet their standards," the site told CNET. A month later, GoFundMe removed a similar page set up by the Baltimore Police Union to benefit the officers involved in the arrest of Freddie Gray, whose death in police custody sparked street protests there. The company told the Baltimore Sun the page had been removed because “GoFundMe cannot be used to benefit those who are charged with serious violations of the law.” Suge Knight got his page closed down this April.

Indiegogo is in general not opposed to fundraising campaigns for criminal justice-related costs. In an email, a company representative wrote, “Indiegogo is an open platform that enables anyone, anywhere to fund what they care about.” However, the company has a “Trust and Safety” team that regularly monitors the site for campaigns that do not comply with the Terms of Use or Trust and Safety standards. (Slager’s campaign was one of these.)

GoFundMe’s Terms and Conditions, on the other hand, explicitly prohibit “campaigns in defense of formal charges or claims of heinous crimes, violent, hateful, sexual or discriminatory acts.” In an email, spokeswoman Kelsea Little, wrote that “campaigns raising funds to benefit people who have been charged with violent crimes are not allowed. Any campaign that is in violation of our Terms & Conditions will be removed.”

But not every crowdfunding site takes issue with these campaigns. At least one platform, Funded Justice, has cropped up specifically for people who cannot afford lawyers in civil and criminal cases. Alan Salvage, chief operating officer, says his site is willing to host any legal campaign, as long as it is not fraudulent. The founder is a lawyer, and the site is committed to the idea that everyone deserves a day in court. Crowdfunding, Salvage says, will someday become a “true equalizer” for the masses.

This September, the Orleans Public Defenders in Louisiana was looking for ways to make up a projected $1 million budget deficit. The office split into committees, and the development committee came up with the idea of a crowdfunding campaign. It could serve both as a fundraising tool and an advocacy tool. And it was certainly easier than throwing a gala. They set a $50,000 goal — enough to pay one staffer — and got $86,140.22 after appearances on major TV programs, according to Lindsey Hortenstine, the communications director.

Though Hortenstine says she’d do it again, she doesn’t want to set a precedent. “We should not be crowdfunding for a constitutional right,” she said.