On living with, and sharing, that information for a lifetime.

By Pamela Brunskill
Perspectives from those who work and live in the criminal justice system. Sign up to receive "Life Inside" emailed to you every week.

This story was produced in collaboration with Vice.

My dad was a man who built stained-glass lamps and custom homes. He studied philosophy in college, and loved poetry and nature. When I was in middle school, he rowed a canoe with me.

And when I was in high school, he killed my stepmother and her lover.

The message I internalized growing up in Buffalo, N.Y. was that criminals were dangerous people, people who would bring society down and make America unsafe for the rest of us. They were people you didn’t want to be associated with. And since I only heard of violence on TV but hadn’t experienced it, it was easy to judge.

I only shared the news about Dad with my closest friends. Even then, I was scared as to how they would react. When I first told Jeff, who’s now my husband, it was the night after the shootings. We were sophomores at the homecoming dance, swaying to the first harrowing measures of “November Rain.” My heart hammered in my chest. “Um,” I stammered, my voice hoarse, high-pitched and teary, so unlike the upbeat friend I usually was with him. “My dad killed my stepmother last night.” Jeff pulled away to look at me, but I quickly pulled him back. “That’s not all. He killed her lover, too,” I said.

He nodded slightly, put my head on his shoulder, and continued to slow dance as though nothing were wrong. 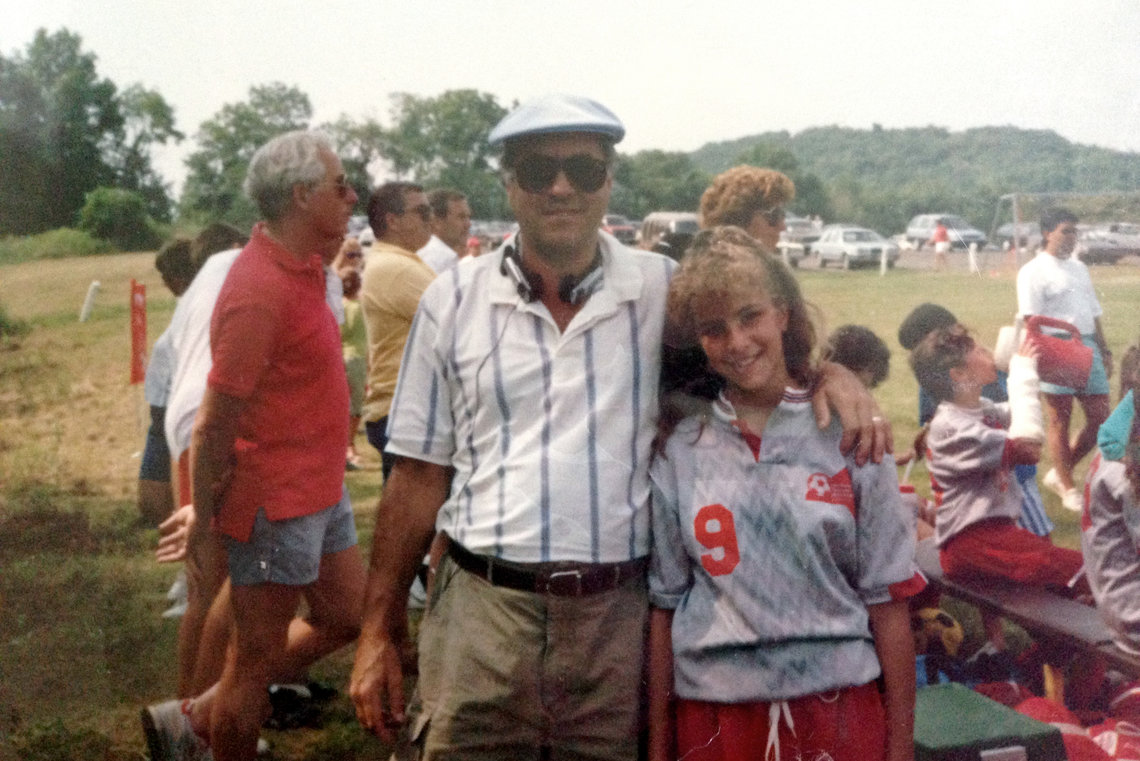 The author with her father in an undated photo.

For my freshman year of college, I went to Wittenberg University in Ohio, where I met and dated an incredibly nice boy. While we walked along the grass one day, I asked Luke1, “How do you feel about people who kill other people?”

Not his real name.

He thought I was making a joke and let out a little guffaw. “Are you trying to tell me something?”

My neck tensed, as it always did whenever I thought about Dad. “My dad killed my stepmother and her lover when I was in high school.”

Quiet. Because of course: No one ever knows how to react.

I didn’t add anything about my father filing for bankruptcy, my stepmother filing for divorce, or him walking in on her with an off-duty cop in their bedroom. I waited for Luke to break up with me, to say that he couldn’t be associated with someone attached to that type of behavior.

Instead, he said, “That has nothing to do with you.”

There were times I wished my father had died that night. We hadn’t gotten along well beforehand, and afterward it became a contentious battle of his demands and my deciding whether or not he deserved my support. But I could never completely give up on him; he was still my father. Which is why I sought empathy for a man whose actions I found reprehensible. And it’s why, six months after one of my daughters asked me who my father was, I took both of them to meet him.

It hadn’t been planned. Jeff was supposed to drop me off at Clinton Correctional Facility in upstate New York. But, as we turned onto Dannemora’s Cook Street that frigid January day, he surprised me by asking if I wanted to bring the girls in. Even more surprising, I said yes.

Jeff and I passed through the concrete walls of the maximum-security prison with our girls. We answered guards’ questions, walked through a metal detector (I knew by now not to wear an underwire bra), and submitted to a guard’s censure when we didn’t have documentation for our kids. At one point, one of my daughters, Mackenzie2, asked, “Where are we?” I told her, “Prison.”

Not her real name.

After a series of stops, we walked into the visiting room. I saw him for a split second before he saw us through the glass window. My father looked almost the same as he had two years earlier, the last time I visited. Balding, small belly, faded purple sweatshirt, bulbous red nose. Almost exactly like some of my grandmother’s brothers. He waved to me eagerly. Through the door, I could see his silhouette as he turned his back to the officer and was checked for contraband.

When he came out, he squeezed me firmly and started crying. I almost cried too, though I couldn’t explain why.

“You brought the girls!”

He extended his hand to Jeff and shook it. “Good to see you again,” Dad said. Then he turned to the girls. “You must be Josie3.” Jeff sat down with Josie in his lap. Dad turned to Mackenzie. “And you must be Mackenzie. Do you know who I am?” he asked her. Mackenzie buried her head in my shoulder. “I’m your grandpa. Your mommy’s my daughter, just like you’re her daughter.”

Not her real name.

Mackenzie continued to cling to me. A little later, she and I went to the vending room to get snacks, and she stopped in the hallway on the way back to peer past the iron bars into the long corridor.

“Is he going back in the dungeon?”

“He broke the law and now he’s paying the price.”

I thought for a second. “No, but he did some bad things.”