Join Our Chat On Mental Health and the Criminal Justice System

We’re talking all about mental illness and justice during our next Justice Talk with Digg, on Wednesday, June 1. For context, browse our guide to key reading on the issue.

By Blair Hickman
Justice Talk is a monthly online discussion series in partnership with Digg Dialog. Check back here for recaps, and updates on future chats.

We’re holding our next Justice Talk on Wednesday from noon to 2 p.m. ET. We’ll be talking about mental health and the criminal justice system. Brush up by reading the pieces below and bring your questions for the experts. RSVP to our Facebook event and you’ll get a reminder when the chat goes live.

How Did We Get Here?

Schizophrenic. Killer. My Cousin. Mother Jones, May/June 2013 In the 1950s and 1960s, as psychiatric drugs improved and Congress began to favor community-based care, state hospitals began to close. But eventually funding failed, and families were unprepared for caring for loved ones with severe mental illness. In this essay, journalist Mac McLelland tells her family’s story — her cousin killed his father during a psychotic break, and her aunt struggled with schizophrenia her whole life — in measured, intimate tones. (Bonus: Tour the nation’s crumbling mental hospitals via video.) 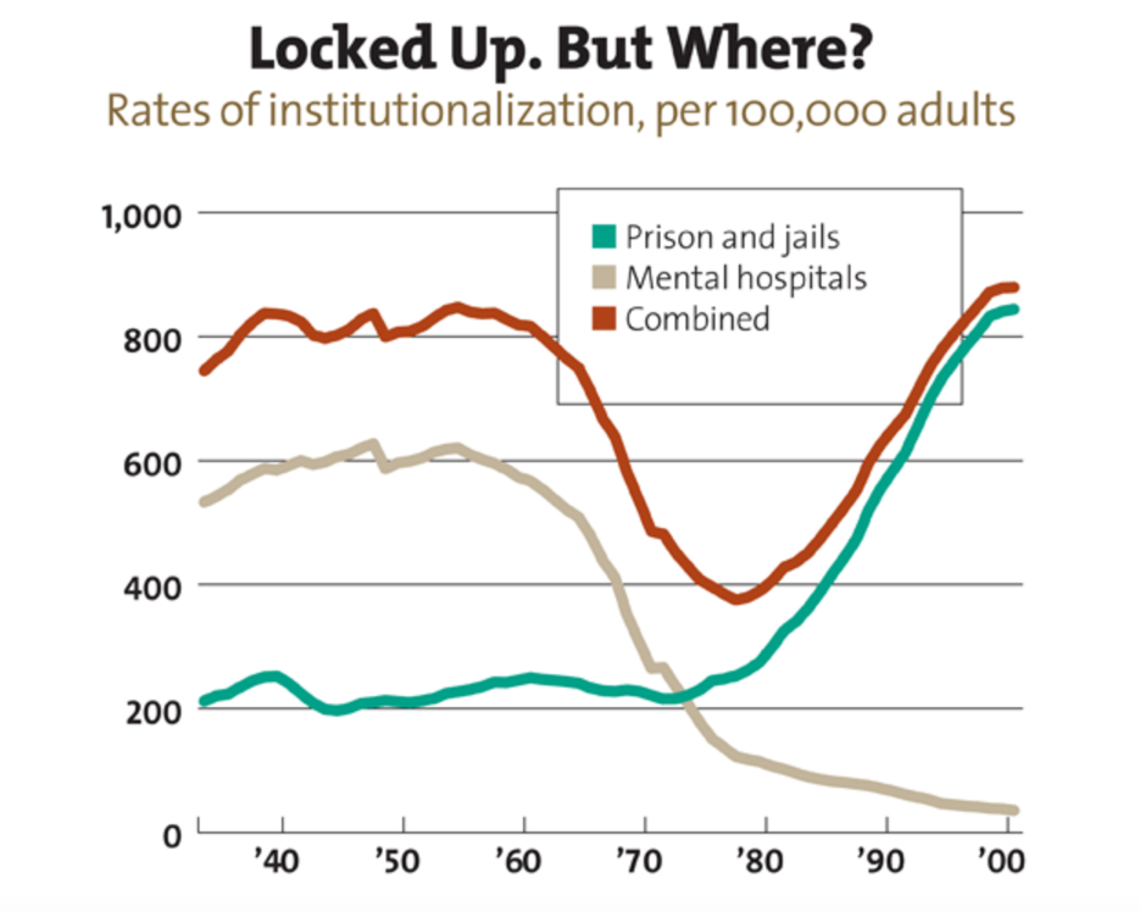 MAP: Which States Have Cut Treatment For the Mentally Ill the Most? Mother Jones, April 2013

One reason nearly 2 million people with mental illness go to jail each year is that states have slashed funding for treatment. Between 2009 and 2012 alone, $4.35 billion was cut from mental health budgets, according to the National Alliance on Mental Illness.

Remember the Florida prisoner who died after guards placed him in a scalding hot shower? That inmate lived in Dade Correctional Institution’s Transitional Care Unit, or T.C.U., which exists to provide mentally ill inmates with better care. In reality, prisoners are often placed in solitary, beaten or starved. And the health professionals who work there, under oath to act in the best interest of their patients, are too afraid of retaliation to speak out.

Even though the U.S. Supreme Court ruled in *Ford v. Wainwright *that it’s cruel and unusual punishment to execute the insane, they left it to states to decide who is the mentally ill. And as Brandi Grossman writes, “Texas, for its part, has consistently set the bar low.” Grossman explores the morality of executing people who don’t understand why they’re being executed through the story of Andre Thomas, a paranoid schizophrenic who killed his ex-wife and her two children (including his own), and is now awaiting execution.

Forty percent of the 10,000 inmates on Rikers Island (give or take a few on any given day) have a mental illness. What happens when corrections officers aren’t properly trained to deal with it? An investigation by the U.S. Department of Justice. “What you really had, we found, was a culture of violence on top of a code of silence, and that is a deadly combination,” said U.S. Attorney Preet Bharara.

Where Law and Order Meets Paranoid and Schizophrenic, The Marshall Project, March 2015

In New York City, on the 19th floor of Bellevue Hospital, sits a courtroom that has nothing to do with guilt. Instead, judges decide if mentally ill inmates, who are housed on this forensic unit floor during psychotic breaks, can be treated against their will.

How Do We Fix It?

America’s Largest Mental Hospital Is A Jail, The Atlantic, June 2015

Three out of four people in this facility have a mental illness. It’s run by a mental health professional. All new staff receive 60 hours of advanced mental-illness treatment training. Yet this is not a hospital — it’s Chicago’s Cook County Jail. Since taking office in 2006, the sheriff has made it a center for experimenting with how jails can be part of the solution.

About 2,700 of the nation’s 18,000 police departments use a training model known as crisis intervention team training, or C.I.T., to change the way officers interact with people who have a mental illness. Pioneered in Memphis about three decades ago, the technique teaches officers about mental illness and encourages them to think about alternatives to using force. This story focuses on how the training has transformed the culture of Portland police.

Most Mass Killers Aren’t Mentally Ill. So Why Push Treatment As The Answer?, The Washington Post, May 2016

Even though the government often points to mass shootings like Virginia Tech and Sandy Hook as a reason for improving mental health care, criminologists and forensic scientists say that simply isn’t true. Michael Stone, a forensic psychiatrist who maintains a database of mass shooters, recently published a paper saying that only two of 10 mass killers are seriously mental ill. So what could actually help identify threats?

The Center Cannot Hold: My Journey Through Madness, 2008

If Crisis Intervention Training programs are about teaching police what it’s like to be mentally ill, then we humbly suggest that they add this book. Elyn R. Saks is a lawyer, a professor, a Yale and Oxford alum and a MacArthur Fellow. She also has schizophrenia. The Center Cannot Hold is her memoir of her struggles with psychotic breaks and provides a lucid account for anyone trying to understand what it’s like to be mentally ill.

Pete Earley is a former Washington Post reporter who covers criminal justice. But when his own son was arrested during a manic episode, he got a first-hand account of what happens when the mentally ill meet America’s justice system. He tells their story in this book, and continues to blog about mental health and the criminal justice system.