The Marshall Project has launched a new open-source reporting tool, Klaxon. This web-based program enables reporters and editors to monitor scores of websites, including data-heavy governmental or corporate sites, for newsworthy changes. When Klaxon finds a new update on one of the pages it is watching, the reporter receives an alert via email, or through a designated Slack channel. Marshall Project reporters are already using Klaxon to keep track of death row cases, federal civil rights investigations and government budgets and spending. Today’s “developer’s release” of Klaxon is aimed at journalist coders who want to set it up for their newsroom and to help their colleagues test its features and provide feedback.

“Klaxon has allowed us to painlessly keep an eye on agencies and courts in dozens of states, without having to devote days of phone calls for simple status updates,” said Tom Meagher, deputy managing editor. “It brings us news tips when they matter, and it allows our small newsroom to get a jump on covering a story that we might otherwise miss until a larger, local newspaper wrote about it.”

Klaxon was created to help journalists with questions that they frequently grapple with: How often does a website on my beat update? Is this site changing enough for me to mine it for data for an interactive? How can I generate alerts for a site that doesn’t offer an RSS feed? How can I track incremental developments on a site that deals with multiple simultaneous tracking issues? 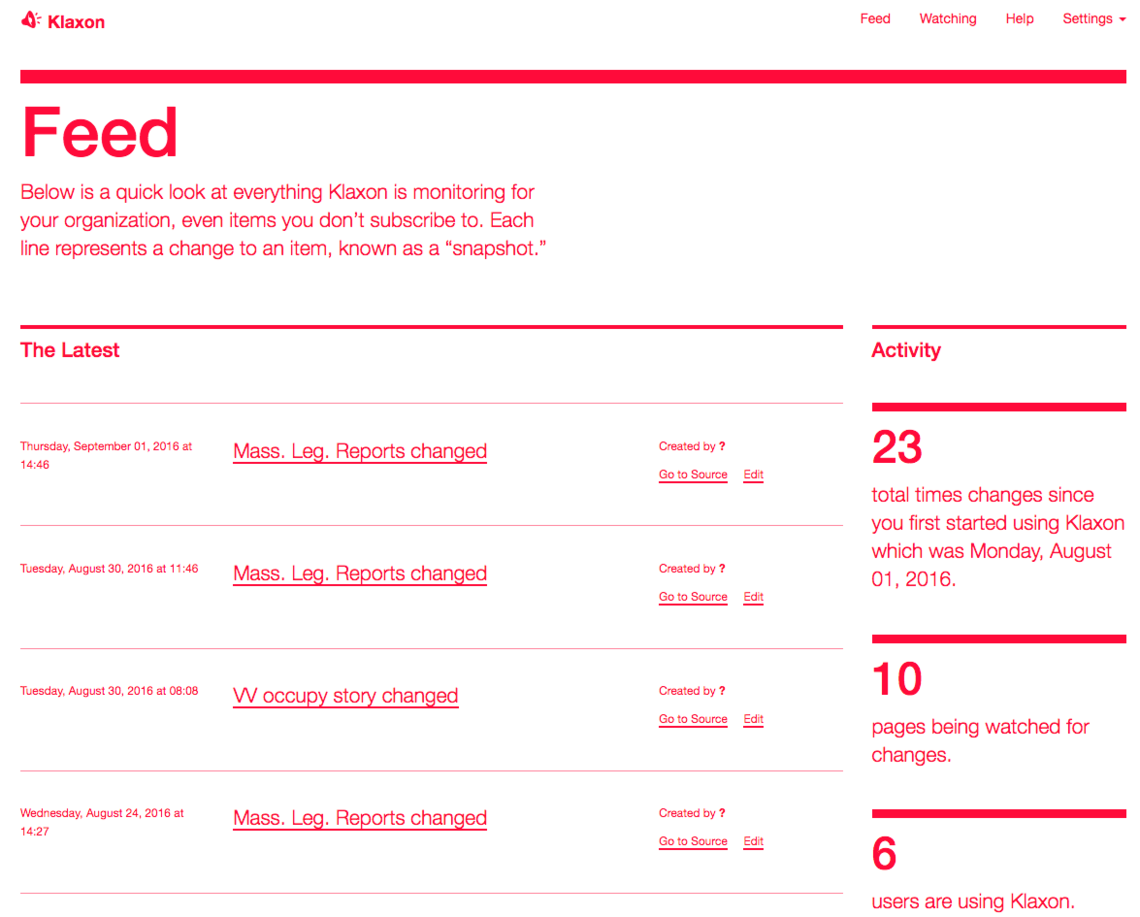 One example that illustrates the utility of Klaxon is covering executions in Texas. The reporter could set up Klaxon to watch the Texas Court of Criminal Appeals website. Anytime the court issues a new order — a stay of execution, or a denial of an appeal — the reporter receives an alert and is able to break the story. Other example are tracking recalls on a pharmaceutical website and following pollution data that is released by the EPA.

We built Klaxon to cover stories in The Marshall Project newsroom. This developer’s release was supported by Knight-Mozilla OpenNews and its development has been in consultation with journalists at other news organizations, including the Texas Tribune, the Associated Press and the New York Times. From today, the code to set up your own instance of Github is freely available on Github, where other developers are able to contribute features and code to the project and to report bugs. News organizations that want to install Klaxon for their reporters can easily do so using Heroku.