Running Out of Time?

An inmate with cancer wonders if her parole will come soon enough.

By Shavonne Robbins as told to Lisa Riordan Seville
Perspectives from those who work and live in the criminal justice system. Sign up to receive "Life Inside" emailed to you every week.

When I was 17, they told me I was going to die in prison.

In 1992, a second-degree murder conviction in Pennsylvania meant a life sentence without the possibility of parole, even for a teenager. I’m 41 now, one of seven living female juvenile lifers who grew up inside the wire fences of the women’s State Correctional Institution in Muncy, Pa.

But in 2012, the U.S. Supreme Court decided that juveniles couldn’t be sentenced to mandatory life without parole. Then, in 2016, the Court made that decision retroactive — meaning that more than 500 of us juvenile lifers in Pennsylvania had suddenly found out we might not die in prison after all.

In between those two decisions, I got cancer—and went from having all the time in the world but no hope, to having hope but worrying I might run out of time.

I hadn’t really cared about getting out until I found out I had cancer. Not caring too much is what you have to do when you lose your freedom at age 16; if you fight every day, you’ll burn out. And I did feel guilt for being involved in a robbery in which a man was killed — no court decision could ever bring him back to his family. 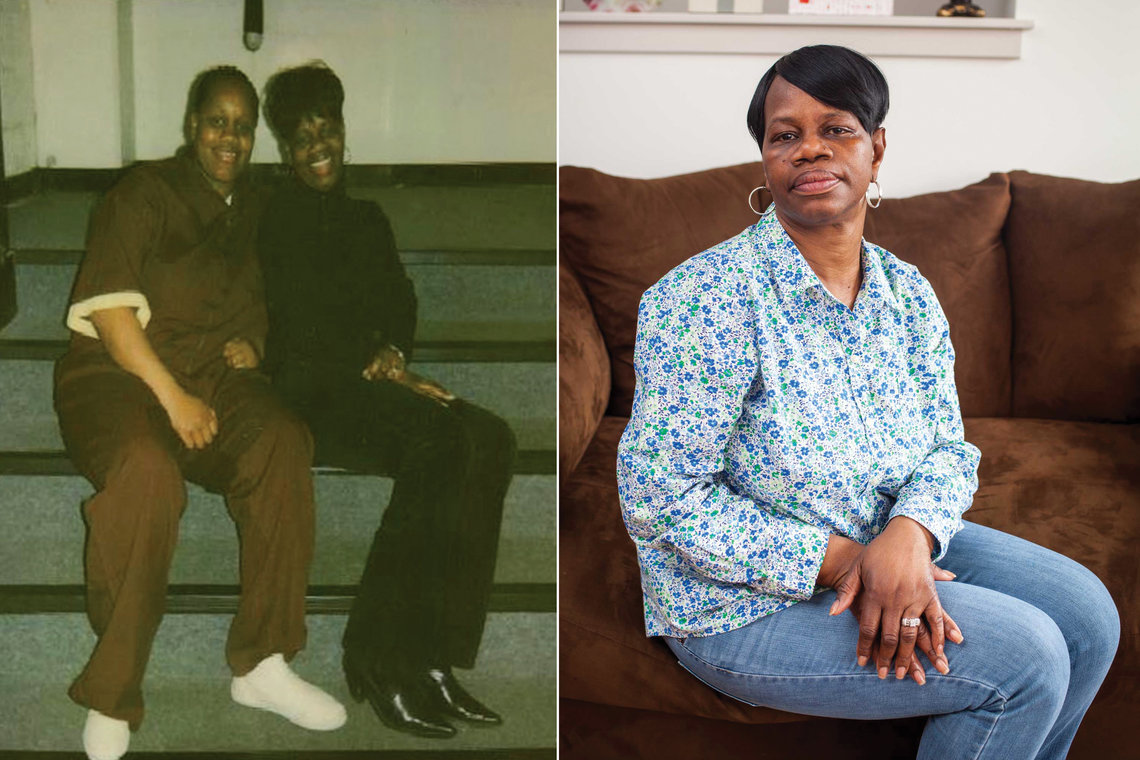 Left, Shavonne Robbins with her mother Vanessa Robbins at State Correctional Institution in Muncy, Pa.; Vanessa in Philadelphia in March 2016.

But one day three years ago, I started to bleed. It was like my period was coming on, but it wouldn’t stop.

I put in a sick call. They gave me an ultrasound. The doctor told me I had a fibroid in my uterus the size of a baby’s head.

I spent four days in the hospital for the hysterectomy, which wasn’t that bad, but while they were doing that, they found cancerous-looking tissue in the lining of my stomach. Mucinous adenocarcinoma, they told me it’s called. The doctor said they had to cut out part of my intestines and remove my appendix, because the cancer was all around that.

When I opened my eyes after the operation, there were two guards there. They don't allow family to come; family can’t even know when it’s happening. We don't even know when we're going out of the facility — which I can understand. It’s prison.

But who wouldn't want to wake up to their family being there?

All the juvenile lifers like me have to be resentenced, case by case, and there are about 300 of us just from Philly. They started by resentencing the people who have been in the longest, and were locked up youngest. I was 16 when I was arrested and have been locked up almost 25 years, but other people have been in 30, 40 years — one man has been in more than 60.

With my being sick, they’re talking about trying to bump me up, but all of it just feels so slow. That Supreme Court decision affecting cases retroactively came out Jan. 25, 2016, and now it’s March 2017.

I signed papers so the lawyers can see my medical records. I write them letters, but I’m never really sure what’s going on. I know they’re busy, but knowing that doesn’t make the anxiety of cancer go away. On the bad days I just go numb. On the good days I can talk with my friends in here and say, “I’m putting it in God’s hands — if they’re gonna let me out, they’re gonna let me out.’

When I got back to Muncy after the operation, I had a whole bunch of staples down my stomach. Other women had to help me do everything: wash up, pull my pants up, put my socks on. They made sure I ate.

The doctors tell me the treatment is going good, but it’s hard to deal with an illness in prison. My hands swell up, my feet are cracked and blistered. They want you to eat healthier — salads and things like that — but we can’t get that in here. Going to appointments, you have to be cuffed.

Then you’re sitting at the hospital, on the machine, getting chemo through the IV, and you see the other people there with their wives or husbands, their brothers, sisters, kids. You’re sitting there with the guards, and you want someone with you who loves you.

For me, that’s my mom. She comes to visit me every other month, waking up at 4 a.m. to take the bus up here. Most of the officers know her, she’s been coming here so long — more than 20 years.

We’re still so happy to see each other on visiting day. I stand in the door where prisoners come out into in the visiting room — prisoners in uniforms and their families and kids and friends. I pause until I spot her. It’s just a warm feeling, to get to sit next to her in those wooden chairs and eat some food and talk.

But now that I’m an adult, it’s a more mixed feeling. I see in her face that she’s tired of making these visits. She works nights, and has to take two days off work to come to Muncy, almost four hours each way. It costs $37 for the bus, then more for the food from the visiting room vending machine.

That’s why I don’t talk to her about my panicked feelings. I don’t ask her to make calls for me—even a couple of weeks ago, when the prison kept running out of my chemo pills. I don’t share with her my frustration with the resentencing process.

Right now, I’m trying to focus on the things that I can actually control. Like my feet.

There are no comfortable shoes in here, but the administration was nice enough to tell me I could order some. I picked out a pair of Nikes, and had someone call the prison supply store. But they said they were out of stock, and now I have to get a catalog and try to order again. Everything in here takes six steps when outside it takes one.

If I can make my feet feel a little better, I think it will help me keep myself up. I need these feet so I can see some of the world when I get free. On the day I get out, I don’t even want to go right home. I want to drive home slow, stopping everywhere. I want to walk in and out of stores, into restaurants, McDonald’s, whatever. I want to buy a pack of chewing gum — it’s funny the things you never thought you would miss. And if my health does take a turn, I want the chance to cherish every little thing.

Shavonne Robbins is incarcerated at State Correctional Institution-Muncy, in Muncy, Pa. She was convicted of second-degree murder—and sentenced to life without the possibility of parole—for her role in a 1992 robbery in which an accomplice shot and killed a man.

Photo by Endia Beal produced with support from The Economic Hardship Reporting Project.