Inside the booming market for 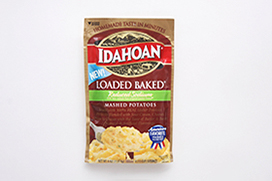 food in pouches,
Inside the booming market for food in pouches, clear electronics, pocket-less clothing and other corrections-approved goods.
By Taylor Elizabeth Eldridge
This story also was published at Vox.

It’s the holiday season, but many incarcerated Americans won’t get presents directly from home.

To stop drugs and weapons from entering jails and prisons, many corrections agencies bar family members from mailing packages or bringing them during visits. Those who want to send food, clothing and other gifts to incarcerated relatives — at any time of year — often must go through private vendors.

Here’s how it works: Families shop from print and online catalogs supplied by care package companies. Every item is prison- and jail-approved. In some facilities, that can mean no glass or metal containers or no personal hygiene products containing alcohol. Items are often contraband-proof, from sealed food pouches to clear electronics to pocketless sweatpants. 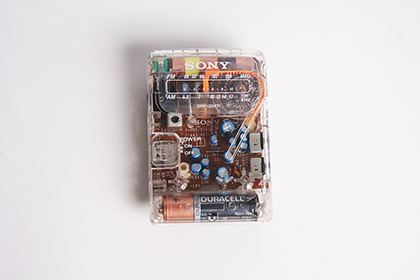 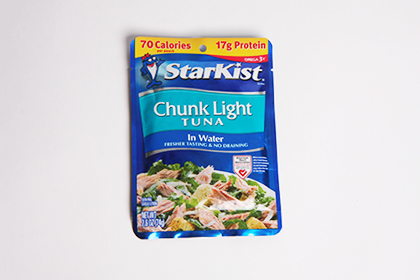 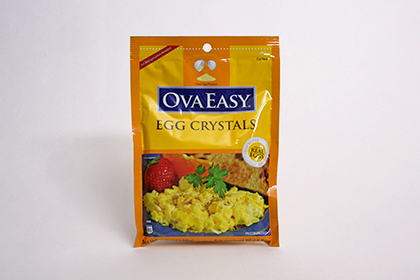 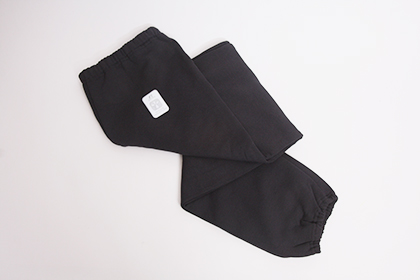 For the holidays, families can choose from seasonal products; think red and green cream-filled Hostess cupcakes and peppermint Twinkies. The Los Angeles County jails’ contract for care packages includes annual “gift packs” that are given to inmates for free during the winter holiday season, complete with a card from the county. 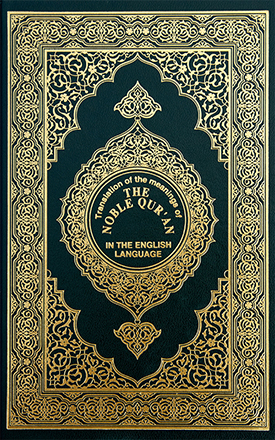 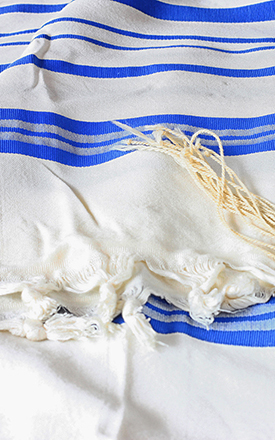 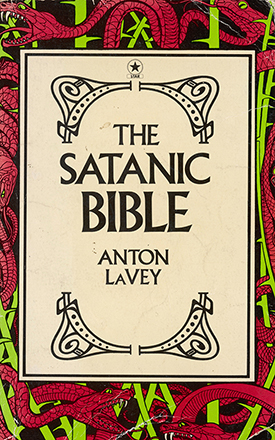 Prisoner care packages are part of a lucrative industry that provides a range of services to incarcerated people and their families. Companies that offer care package programs often bundle additional services, such as phone and commissary, into one contract with a corrections agency. Keefe Commissary Network, which along with Access Securepak is part of Keefe Group, reported net sales of over $375 million from care package, commissary and technology programs in 2012, according to a 2014 contract proposal posted on the West Virginia state government website. Access Securepak had over 125 active custom package programs nationwide in 2014 and was the exclusive provider for 18 state departments of corrections.

Keefe Group, based in St. Louis, Missouri, is comprised of several companies that provide services to prisons and jails nationwide, including care packages, commissary, video visitation and surveillance technology. Keefe is a wholly-owned direct subsidiary of TKC Holdings, which is indirectly controlled by the Miami-based private equity firm H.I.G. Capital.

Companies often offer their services at no charge to corrections agencies along with a share of the profits. In its bid for the West Virginia contract, Union Supply Group, which oversees Union Supply Direct, projected that the state stood to earn about $95,000 in one year, based on a 17 percent commission of annual care package sales.

The privatization of services at correctional facilities generally leaves prisoners and their families with fewer choices, forcing them to do business with certain vendors or go without, says Wanda Bertram, a spokesperson for the Prison Policy Initiative, a nonprofit that advocates for incarcerated people and their families and has conducted research on predatory practices in the prison and jail communication industry.

Although catalogs can contain hundreds of items, some relatives lament their inability to send a personalized gift. “We want to love the prisoner. We don’t love their crime, but we love them,” says Julie Tyson of Morehead City, North Carolina, whose son is incarcerated in a state prison. “It’s hard to do that through the calls and brief visits. It would be so nice to send a pair of socks or something I went and picked out for him.”

Perhaps because prison meals often leave much to be desired, food tends to dominate care package offerings. Most snacks and meals are heavily processed and packed with sugar, fat and sodium. (Food typically must be in hermetically-sealed and tamper-proof packages, which rules out most fresh options.) 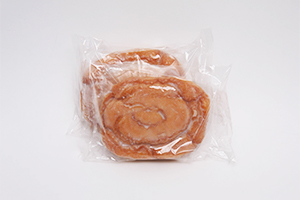 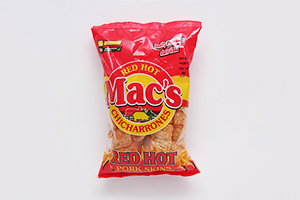 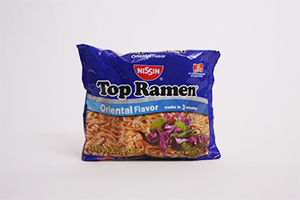 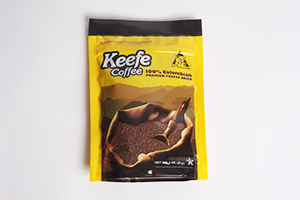 There’s often a variety of pre-made gift packs, like the “Heat and Eat” package sold by iCare, a program of the stadium and schools food service giant Aramark, that contains a quesadilla, soda and 10 packs of ramen noodles. 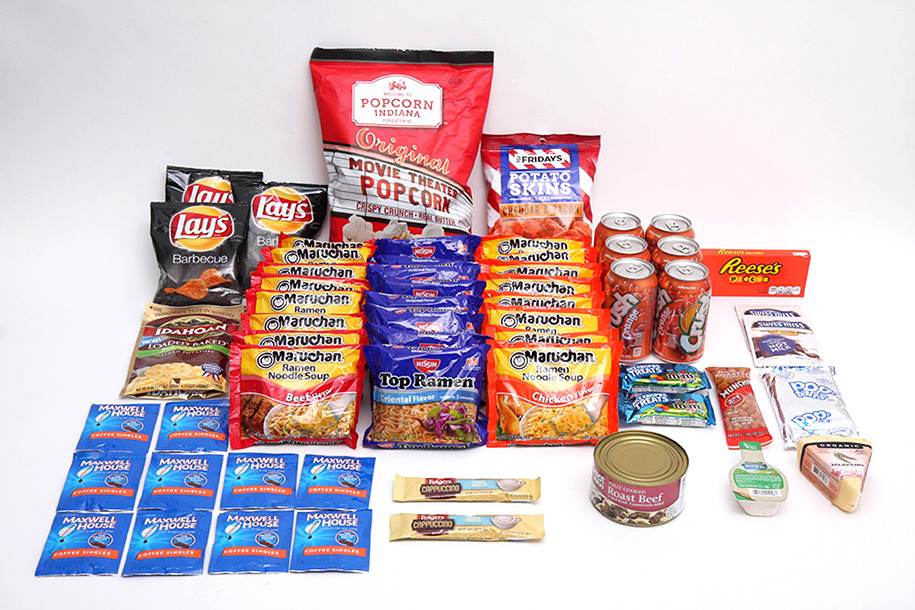 “Hugs and Love"
This pre-assembled package is advertised as a chance to send a loved one “a gift bag full of their hometown snack favorites,” according to iCare’s online catalog. At Lenawee County Jail in Michigan, “Hugs and Love” costs $55.99. *Not pictured: Big Haus Sausage. 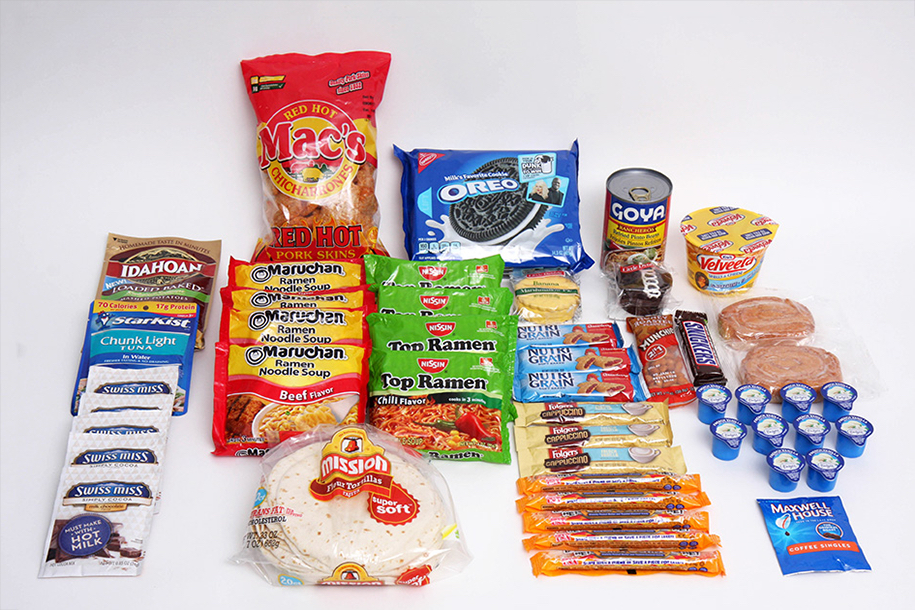 “Mega Meal Pack"
With about four dozen individual items, this gift pack is one of the largest pre-made packages sold by Access SecurePak, and contains a variety of snack foods. At Pima County Jail, Arizona, it costs $56. *Not pictured: Cactus Annie’s Tortilla Chips 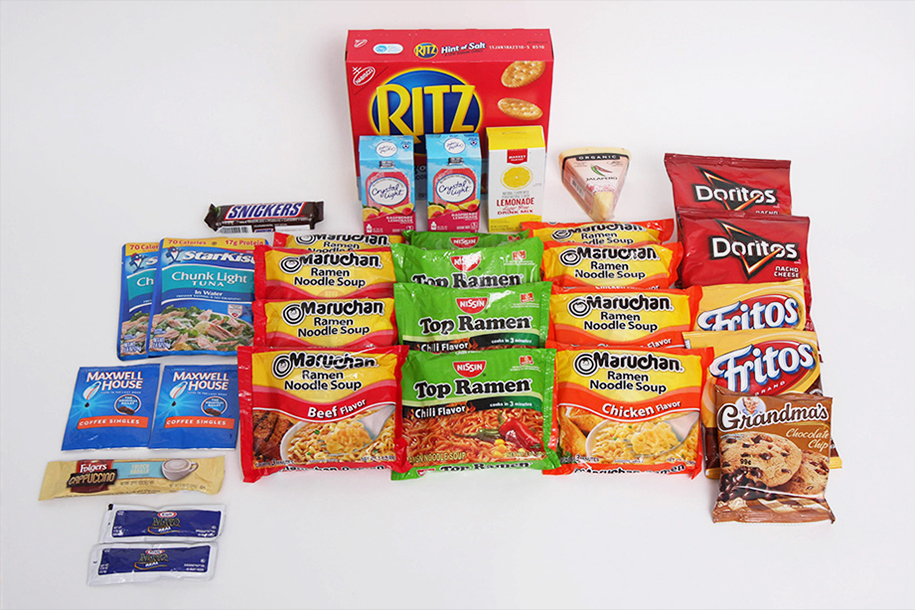 “Miss You"
This gift pack will warm “the heart and soul with a creative blend of snacks from Frito Lay and Ramen,” according to iCare’s online catalog. At Wicomico County Jail in Maryland, “Miss You” costs $32.99. *Not pictured: Double Barrel Salami Sticks, Double Barrel Spicy Meat and Cheese Sticks

Most food items can be stored without refrigeration and consumed in a cell with the help of a hot pot, including dried ramen noodles, instant coffee and mac and cheese. In some cases, the snacks — such as Big Haus Sausages — are made exclusively for correctional facilities; other items, like single packets of mayo, are typically not sold individually.

iCare even allows loved ones to send prepared hot food to inmates; for example, New York, Virginia and Tennessee each have a jail where inmates can receive an Angus double cheeseburger, a calzone or a pepperoni pizza.

The three major care package providers, Access Securepak, Aramark’s iCare, and Union Supply Direct, each have relied on incarcerated workers. Access Securepak has used inmates to unload trucks, stock and pick items from warehouses and assemble packages, according to a 2015 West Virginia contract proposal. In its 2014 bid, Union Supply Direct reported that it employed inmates to, among other things, clean freezers and manufacture clear electronics sold in its package program.

“We deliver experiences that enrich and nourish millions of lives every day,” Karen Cutler, vice president of corporate communications for Aramark, wrote in an emailed response to questions. Correctional facilities determine the prices, nutritional guidelines and labor model used in their contracts with the company, she said.

Keefe Group and Union Supply Direct did not respond to multiple requests for comment.

Prisons and jails have long restricted the types of items inmates can receive from the outside — nothing with poppy seeds, for example, or no boxer shorts with patterns on them. And where packages from home are allowed, workers have thrown away those that contained forbidden items. So some families may consider ordering through authorized private vendors, which only offer pre-approved goods, to be more convenient than navigating a prison’s byzantine gifting rules.

But others say sending packages through these companies can be onerous and expensive.

Corrections agencies set different rules for how many gifts inmates can receive and how often they can receive them. In some facilities, inmates who are eligible to receive packages (usually those who are lowest risk and have good behavior) can get a care package once every three months; at others, inmates are allowed weekly deliveries. The timelines are strict, said Joi Davis of Clarksville, Tennessee, whose husband has been incarcerated since 2003. “If you miss the window, even by one day, you can forget it,” she said.

Packages can also be limited by weight, price and item count. Many facilities don't allow packages that weigh more than 30 pounds. Gifts are often limited by dollar value; in some places, the cap is $50 a week, at others, it’s $150 every three months. The number of items, like hair ties or sunglasses, can be restricted as well.

“It’s a taxing experience,” Davis said. “There should be other avenues for families to be able to send their loved ones items that they want and need.”

Family members also complain that they’re often forced to buy their loved ones basic necessities that should be provided by the prison. Jennifer Gross of Livonia, Michigan, says she sent her boyfriend, an inmate in the Michigan Department of Corrections, a care package containing toilet paper after he told her he had gone without for four days. “We don't expect for all our loves to be freed,” she said. “We just want them to have the basic needs and nutrition they deserve.” 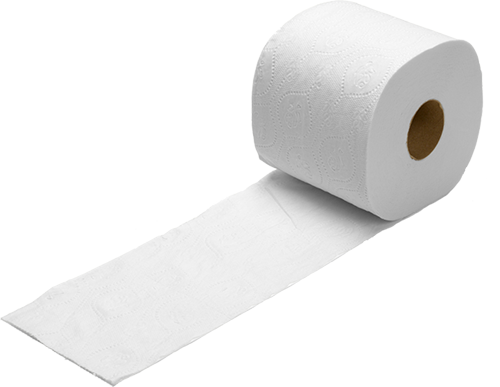 Price is another issue. Relatives say that some goods sold in prison-approved catalogs cost more than they would in a store. At the very least, the pricing of items can be unpredictable. At Franklin County Jail in Pennsylvania, for example, a radio from Access Securepak costs $22, but in Custer County, Nebraska, the program sells that same radio for just under $13. At Arrendale State Prison in Georgia, a wire-free bra from Union Supply Direct is $13.80; at Northeast Correctional Complex in Tennessee, the company sells the same bra for $25.95. 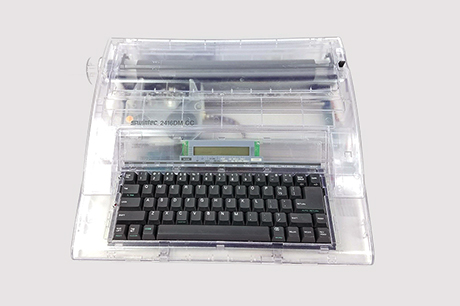 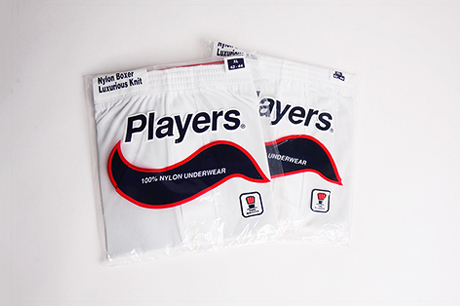 $3.00
Okeechobee Correctional Institution, Florida
$7.00
Moore Haven Correctional Facility, Florida
1 At Moore Haven, boxers come in a pack of two, costing just over $14. We halved that to compare the price of one pair. Both items sold by Access Securepak.

Such variation comes from how individual contracts are negotiated between corrections departments and their vendors. In Los Angeles County, Keefe’s contract requires that prices fall within 2 percent of the cost of the same item at any three convenience and grocery stores within 12 miles of the central jail; in contrast, Aramark’s catalog prices in Santa Clara County are required only to be the same as or lower than the prices in the commissary.

In other places, pricing guidelines use the fair market price of an item as a baseline and mandate that the prices stay within 10 percent of the current selling price.

Some inmates have filed lawsuits against prison officials and private companies over the cost of care packages, with little luck. In New Mexico, an inmate sued over the price differences for identical products sold through county and state prisons. In California, an inmate alleged that his family suffered by having to purchase items exclusively through a private company with inflated prices and extra fees, particularly for items that he claimed should have been paid for by the prison. 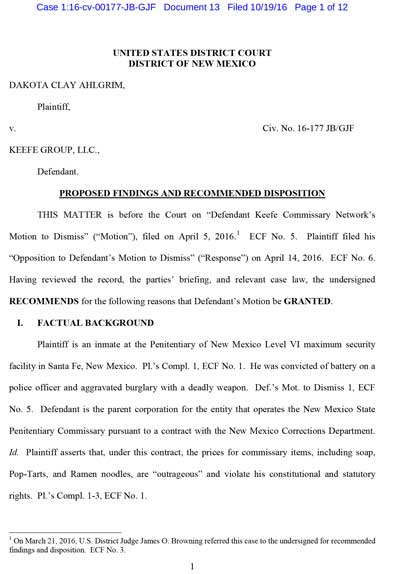 The case in California was dismissed because the inmate was unable to pay the court filing fees. The New Mexico case was dismissed because the judge ruled that inmates do not have a constitutional right to goods at certain prices. The judge also ruled that many of the allegations made by the inmate could be brought only by government agents responsible for oversight of private companies, such as the United States attorney general or the Federal Trade Commission. In Mississippi, the state attorney general is currently pursuing a lawsuit against Keefe alleging fraud and bribery in its contracts with the state department of corrections.

Keefe Group did not respond to requests for comment about the Mississippi lawsuit. 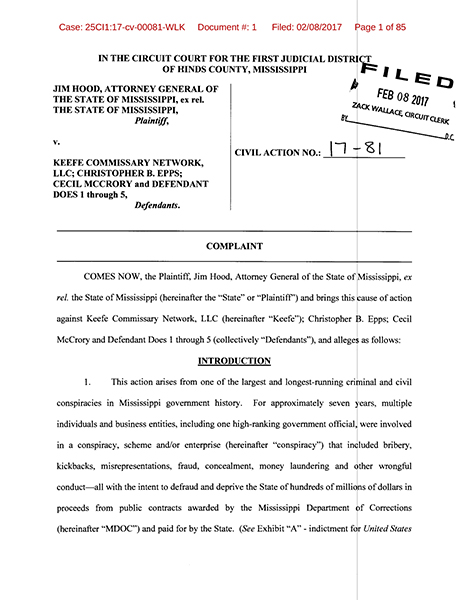 Despite her frustrations with the industry, Davis estimates that she spends as much as $600 of her monthly budget on staying in touch with her husband through things like phone calls, visits and care packages. “It eats up the money, but you don’t want your loved ones to go without,” Davis said.

She has two recommendations for other families who want to send care packages to incarcerated loved ones: “Have a budget and a lot of patience.”

About our product images: The companies mentioned in this article deliver to correctional facilities only, so The Marshall Project purchased and photographed retail store products that most closely resembled items sold in corrections package catalogs. All catalog prices are current as of December 2017, except for the boxers sold by Access Securepak through Okeechobee Correctional Institution, Florida; they were sold in a June 2017 catalog.