“I want to do the work that the guys do.”

by Gina Clark as told to Manuel Villa
Perspectives from those who work and live in the criminal justice system. Sign up to receive "Life Inside" emailed to you every week.

I always wanted to be that FBI agent. You know, Jodie Foster in “The Silence of the Lambs.”

I grew up in northeast Philadelphia and majored in administration of justice at Penn State University. During the summer of my senior year, I interned at the Pennsylvania State Police. By the time it was done, my heart was set on becoming a trooper.

That same summer I applied for a job there. To play it safe, I also applied to several other agencies, including the Pennsylvania Department of Corrections. By fall, the corrections department offered me a job. The application process for the Pennsylvania troopers was still underway, so I accepted as a backup plan. But I never intended to really take it: I was determined to be a trooper.

Applying to become a state trooper was a long process. First you have to fill out an online form, then pass the lie detector and drug screening tests. Finally, about six months later, the day of the physical ability test came. But coincidentally, it was scheduled on what should have been my first day of work at the Department of Corrections, which I obviously missed.

We get there and we do the pull-ups, we do the dead-lifts, the push-ups and the sit-ups. I passed everything. The last thing we had to do was the mile-and-a-half run. I believe it was February, 2002. There was a snowstorm, and I remember looking out of the window, watching the fierce snow. With about 30 of us applicants there, I thought for sure they would have us run on an indoor track.

They took us all outside.

After what seemed an eternal mile-and-a-half, with the wind blowing against me, making me feel like I was running into a brick wall, I crossed the finish line. A female state trooper clicked her stopwatch. I looked up at her, panting and exhausted, and she said to me, “Four seconds.” Almost in tears, I said between breaths, “Oh my gosh, four seconds! I made it, I made it!” She looked back at me, and she said, “No, sweetheart. You missed it by four seconds.”

Stunned, I asked if I could take the run over again. "Take the run over again?” she responded. “You've gotta start at square one! You gotta go back, and apply again online, and go through everything." It just devastated me. I could not wait for another year. Fresh out of college, I felt defeated. I had no choice but to become a corrections officer. 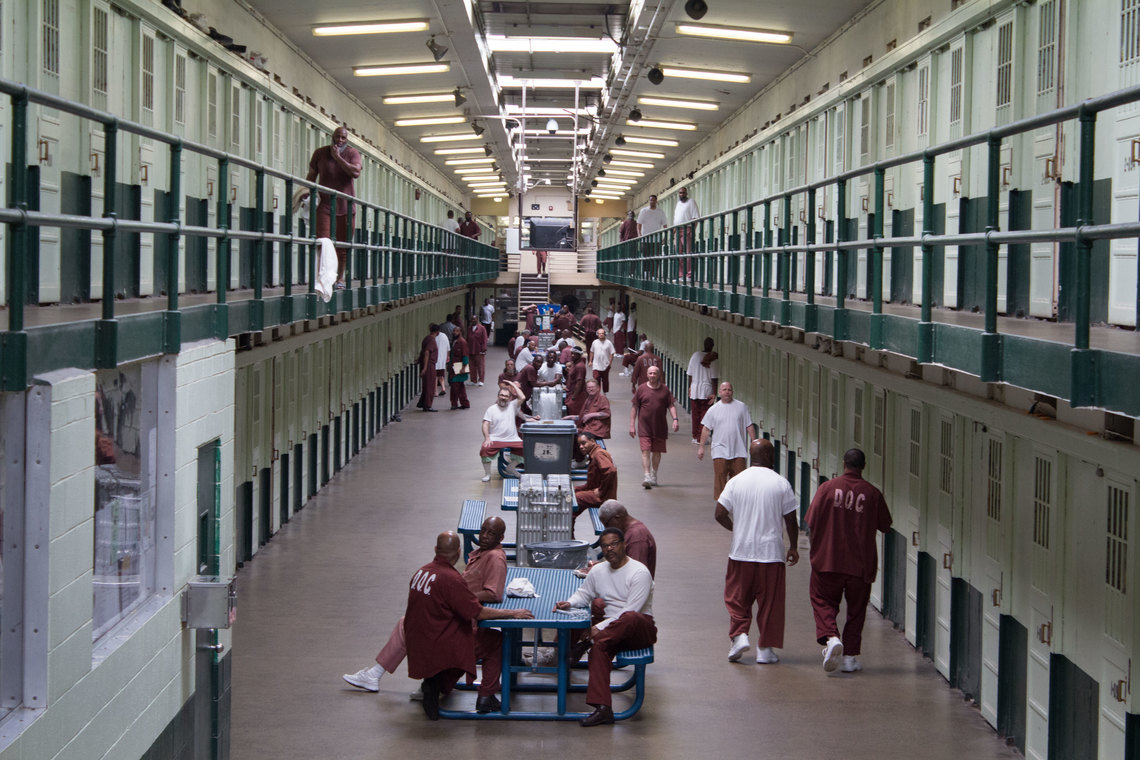 Inmates at State Correctional Institution Graterford in Collegeville, Penn., in May. The institution is now closed.

I remember driving up to Graterford prison the very next day, emotionally drained and my body sore. I took a long look at the wall of the then over-70-year-old facility. You'd hear the stories. The toughest prison in the state of Pennsylvania. There I was, 21-years-old and thinking to myself, “What am I doing?” I could not believe a mere four seconds could change my life that way.

And thank God they did. Today, I cannot picture myself doing anything else.

After a year of training as a CO, I received a call from a sergeant who worked at the Restricted Housing Unit with a security level five—a maximum security unit. It’s what out on the street or in communities people might call “the hole” or solitary confinement. The sergeant said, “I liked your work ethics as a trainee. You have a good head on your shoulders, and I want you to come work with us.” The RHU is an intense place to work, especially being 22—and a female at that. So what do I do? I say yes.

Females weren't considered people who could work there. We were seen as being in the way. The only other female officer there when I entered worked in the control center. So I said to the sergeant, "Listen, I'm not just here to write in logbooks. I want to do just the amount of work that the guys do, be out on the wing. If you guys run showers, I'm cuffing guys up and I'm taking them to the showers. I want to be treated just like how every other officer is in here." And they did. They treated me like that. If it was a regular day, it was a regular day; if we had to go in on a use of force on an inmate, my lieutenant would say, "Clark, get ready." I was the only female in the wing.

I wasn't the first female to actually work on that unit. All correction officers experience it as part of the training, just as every other area inside the institution. But it was very few and far between for a female to have a permanent position in the maximum security unit, so I was part of the movement introducing female officers to become a permanent fixture in level five units.

At the time, there were no counselors embedded on a level five unit. They would just do rounds on Fridays and wouldn’t see the inmates for a week. So the COs acted as everything for those inmates. You were not just security down there at that time: Because of the way they were confined, you were their officer, unit manager, counselor. That is what started me thinking about switching from the security side of things into the treatment side of things.

As a corrections counselor, you really get to know the guys. You sit down with them, read their cases, see how they grew up. And it starts to click that some people aren't dealt with the hand that others are. Maybe some guys grew up in a household of addiction, and that's what they know, so they follow suit. Maybe some fall into street gangs, looking for the support they never received from an absent or abusive parent. And then, one thing leads to another and they’re doing time with us.

A counselor’s job is to look after the inmate. That ranges from reviewing him to determine his custody level, managing his list of authorized phone numbers, getting him a job inside prison, helping him run therapeutic groups, all the way up into preparing him for reentry to society. We have the responsibility to help them change, get home. Some guys will open up because I'm a female. Some guys won't. I don't think whether and how they interact with you has to do with gender, but with what type of relationship you have with them.

Outside, my friends call me Gina, so when I am at the mall or at a grocery shop, and I hear someone call “Mrs. Clark!” I always know it's someone who was formerly incarcerated. A lot of times it's, “Thanks for treating me like a human being.” Every now and then they'll call up and they'll say, “Hey Maj., I just want to let you know I'm getting married. I got a great job. Things are going good. I'm no longer at the halfway house, I'm home.”

There's disappointing moments too, of course. When I see a guy come back into the state system, that sucks. I'm like, “What happened?” Some of the guys who end up back here will put their head down when they see me making rounds. But I will walk to them and say, "Hey, what happened? Why are you back?" And then we'll get into that. These are people who, when they become incarcerated for the first time, may have lost their families, their friends, their careers, their jobs. Many also have to cope with addiction or mental illness. It's hard to recover from that. They make mistakes again. So unfortunately, for some guys it's just a way of life. But we try to get it right.

Those four seconds I was short, thank God for them.

Gina Clark, 38, is the major of unit management at State Correctional Institution Phoenix in Montgomery County, Pennsylvania. The $400-million prison opened on July 9, 2018, replacing the now-defunct SCI Graterford, which operated on the same property for 89 years.