Police across the country “have to be realistic about what we can and can’t do.”

By Simone Weichselbaum
Coverage of the COVID-19 pandemic, criminal justice and immigration.

WASHINGTON, D.C. — After police officers picked up a woman wanted on a domestic violence charge and took her in for booking, she dropped a bombshell: She might have been exposed to COVID-19. She was taken to a hospital for testing.

Text messages started flying as cops wondered whether any of them who had crossed her path were at risk. Eventually a sergeant sent an “Exposure Clarification” email to the police station involved saying the department was decontaminating the police cruiser used. As for the officers involved, they had been notified. No mention of taking them off the job or even off the streets.

“As long as they are not showing flu-like symptoms they are going to come to work,” said Sgt. Stephen Bigelow, chairman of the D.C. police union, noting that the woman’s exposure wasn’t confirmed. “We have to be realistic about what we can and can’t do.”

And so it goes at the 3,800-officer Metropolitan Police Department, and in departments across the country, as leaders try to balance the safety of their officers with the safety of the public, making spur-of-the-moment decisions and scrambling for supplies in the chaos of coronavirus. Meanwhile, the rank-and-file are also engaged in a balancing act: traditional bravado versus new caution. 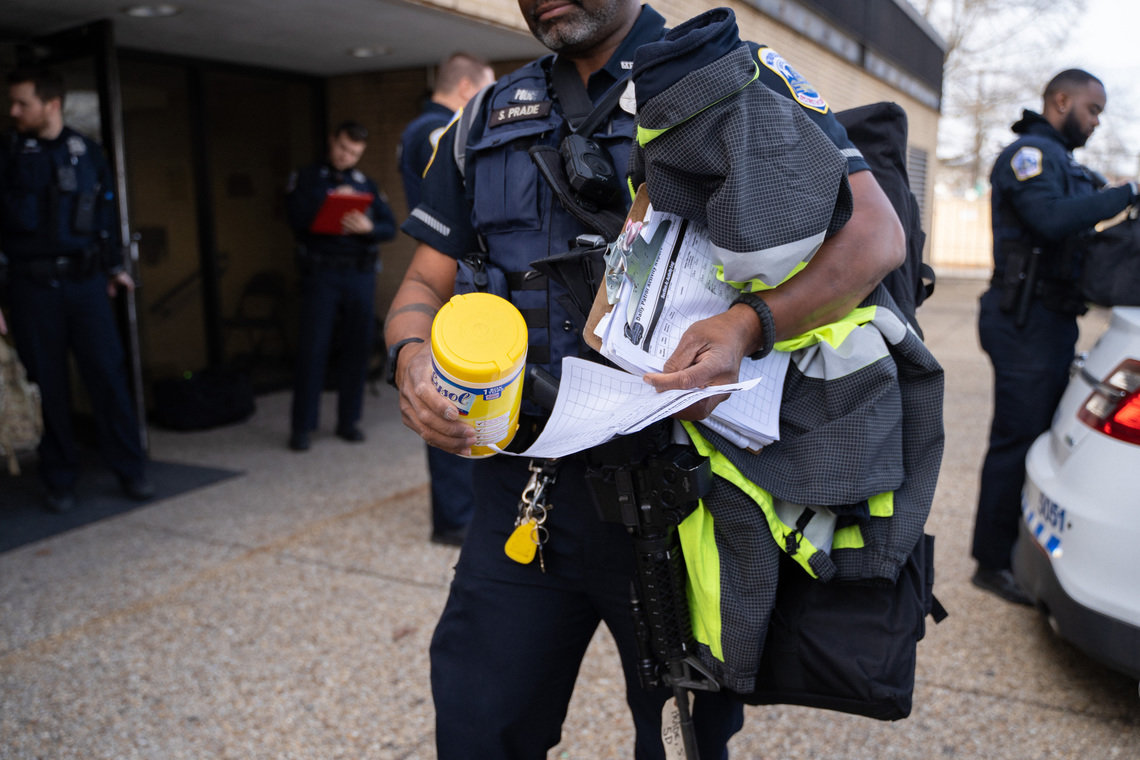 Officer Steven Prade carried a container of Lysol wipes in one hand, his department-issued M4 assault rifle in the other, outside the Fifth District Metropolitan Police Department building on Monday.

Nate Palmer for The Marshall Project

Officer Steven Prade, 51, had a yellow container of Lysol wipes in one hand, his department-issued M4 assault rifle in the other. A 27-year veteran, Prade said he has been using his personal cleaning supplies to wipe down his patrol car at the start of each shift—but he wasn’t wearing a mask.

“This is a risky job,” he said. “Either you will be afraid of a virus, or somebody shooting bullets at you.”

Law enforcement agencies around the U.S. have just started to roll out policy changes that reduce police officers’ interaction with the public and with other cops. At least four departments have either cancelled roll call or at least moved the meetings outside, according to the Washington D.C-based think-tank Police Executive Research Forum.

Philadelphia told its officers to stop arresting non-violent offenders. Officers in Fort Worth, Texas, have to get permission to arrest people for low-level misdemeanors. New Rochelle, New York, which has a large cluster of cases, is no longer sending officers out for routine sick calls.

The New York Police Department has at least four officers infected with the virus, and a growing count of cops who have called out sick. At least two officers in Los Angeles now have COVID-19, according to news reports, and smaller departments also have sick officers.

Thousands of cops across the country are working without protective gear. The Chicago Police Department, the nation’s second largest, has yet to give out hand sanitizer to officers, said Jim Pasco, executive director of the Fraternal Order of Police’s national office. The union is now imploring the private sector to donate the product for cops in Chicago and elsewhere.

“Police departments, large and small, are totally unprepared and have no plans for dealing with this crisis,” Pasco said.

“I’ve heard that the department has masks, but I have not seen any or received any,” said Detective Qiao Zhang on Monday as he began his afternoon shift. “It’s worrying. We have to follow up at people’s houses and in hospitals. We are in close enough contact with people at the hospital who may have been around people infected with the virus.”

Outside the ambulance dock at United Medical Center in Southeast D.C. on Monday evening, two patrol cops paused to put on face masks as they escorted a handcuffed man from their police car to the emergency room.

One officer held up an N95 respirator mask. “My captain bought them for us,” he said. But his partner said he had been given a flimsy surgical mask, which he struggled to tie to the back of his head.

In a station house parking lot, only a handful of cops said they had been given masks. About a dozen officers were shaking hands, slapping high-fives and hugging each other goodbye for the day—definitely not “social distancing.” Jokes about the zombie apocalypse were heard more often than concerns about the threat of COVID-19.

“It’s just a bad cold,” said Officer Abby Kershek, 23, as she sprayed Febreze air freshener throughout a patrol car. “I am not scared.” 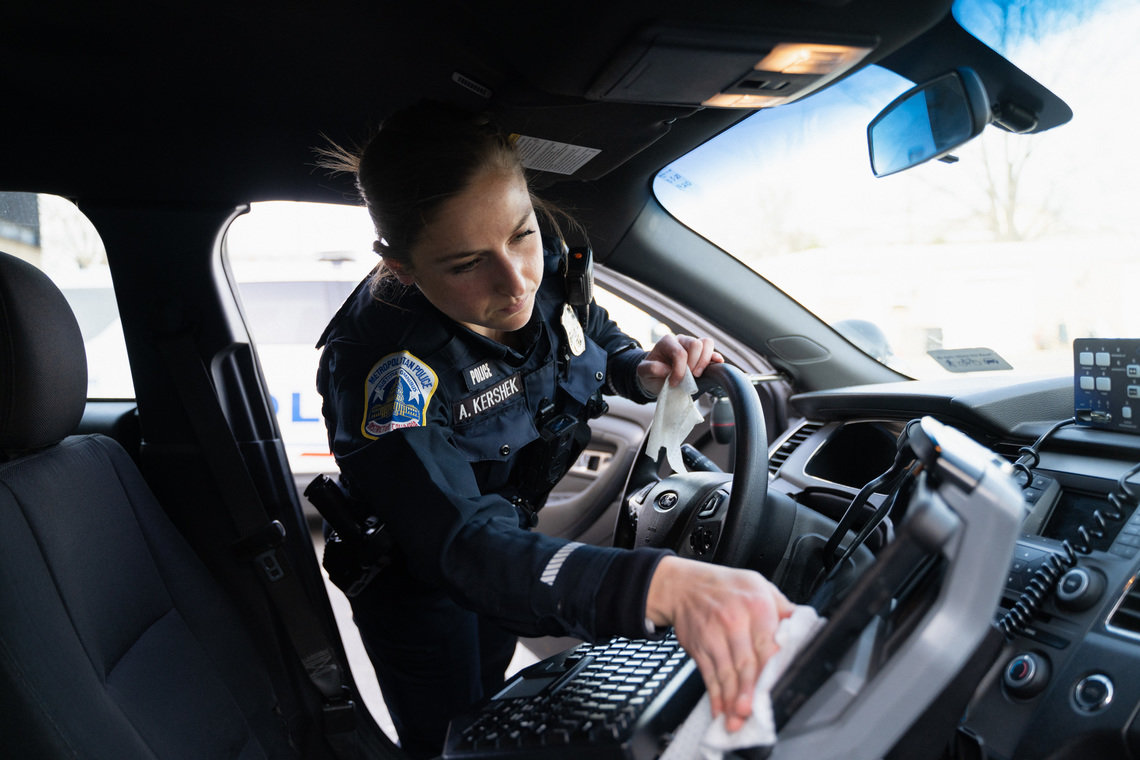 Nate Palmer for The Marshall Project

None of the department’s officers has tested positive for COVID-19, officials said. But a transit police officer reported Monday that he was infected with the virus. The city Department of Health has posted on its website a count of 31 active cases.

Police Chief Peter Newsham, in an email to officers Monday evening, said the department is increasing cleaning in roll-call rooms, has distributed some supplies, and has ordered more “goggles, face shields, masks and disinfectant wipes—but we remain mindful of the ongoing difficulty of obtaining these items in the current environment.”

By Tuesday, department brass sent out an internal email announcing more policy changes. An increased amount of police reports would be taken over the phone, including “non-violent, non domestic call types that do not require the immediate presence of an officer.” The memo also encouraged cops to ask people to speak to them outside while standing 5 to 6 feet away.

Bigelow, the union chief, said he supported the new measures. But, he added, “I would have liked to have seen these decisions made quicker.”