While their mental health deteriorates, some are stuck in jail as hospitals are decreasing admissions to prevent the spread of infections.

Keith had spent over four months in the Hillsboro, Oregon, county jail—charged with robbing a deli with a fake gun—when his delusions returned this February. In a phone call to his father, he rambled about drinking bleach, being exposed to nuclear waste, and fearing going blind. Keith, who is being identified by his first name to protect his privacy, had a history of schizophrenia.

This article was published in partnership with The Oregonian.

Keith’s lawyer told the circuit court that his client no longer seemed well-functioning enough to stand trial. On March 13, sheriff deputies drove him 50 miles to the Oregon State Hospital in Salem for an evaluation, where a psychologist found him to be seriously mentally ill—enough to be hospitalized. But the next day, the hospital’s superintendent issued a memo halting almost all new admissions in an attempt to slow the spread of coronavirus.

In mid-April, the judge agreed that Keith was incompetent to stand trial and ordered his admission to the state hospital, where he would be medicated, monitored by a psychiatrist and taught how courts work—a process called “competency restoration.” He should have been moved within a week, according to a federal court ruling. But because of coronavirus, Keith, like many other mentally ill detainees around the country, was stuck in the county jail.

“It’s not like it doesn’t matter if we treat him today or tomorrow,” said his attorney, Casey Kovacic. “Failing to treat psychosis leads to a worse long-term prognosis. There is brain damage that is being caused.”

Across the country, even before the COVID-19 crisis, criminal defendants in need of competency restoration have often waited weeks or months in county jails for a hospital bed to open up. But the pandemic has stalled many cases even further, trapping some individuals in jails as hospitals try to wall themselves off from new infections.

Now more than ever, the COVID-19 crisis has left mentally ill individuals and the attorneys fighting for them with few good options. Being stuck in a jail has never been more dangerous, since the virus can spread rapidly within crowded quarters. But entering a large, communal living institution like a psychiatric hospital carries its own heightened risk of infection. And even if a defendant is admitted to the hospital, how much treatment can be provided as facilities lock down?

In New Jersey, widespread outbreaks at psychiatric hospitals have slowed admissions significantly. In Washington, even psychological evaluations are delayed. In Colorado, the waitlist to get into a hospital doubled in a month. And in Washington, D.C., public defenders asked courts to release all misdemeanor detainees who need restoration, rather than expose them to the virus at the city jail or the forensic hospital.

“They’ve stopped admissions and they’ve also stopped evaluating people,” said Philip Fornaci, staff attorney with the National Disability Rights Network. “That leaves a bunch of people who are not competent to stand trial sitting in jail. You want to get people moved out. The question then is, who could be safely moved out in the midst of this situation? Is there some place they can go?”

Many say the best option would be a community treatment program, which could help secure a place to live while providing therapy and other classes. “Even before this pandemic we have been trying to get folks to live in the most integrated community setting possible,” said Emily Cooper, legal director for Disability Rights Oregon. “A year ago it was because it didn’t make fiscal sense, now it’s because it doesn’t make public health sense.”

But many of those programs are underfunded or relatively new, advocates for the mentally ill say. Often reserved for those facing low-level offenses, many leave out those charged with more serious crimes or dealing with more acute mental illness. And now, those social service providers are also having to figure out how to provide treatment and care from a safe distance.

“We need to be building the infrastructure to restore people in the community,” said Anita Khandelwal, director of public defense for King County, Washington, where estimated wait times for admissions to state hospitals for competency restoration have increased by three months. “Even if there isn’t a community care option, being in jail is the wrong place. We know being in that environment exacerbates mental illness.”

The Oregon State Hospital increased admissions in mid-April. But the month-long stoppage created a backlog, leaving many clients in jail long past the weeklong deadline. On Tuesday, a federal judge set aside those time limits, as long as the hospital worked to speed up its admissions process. 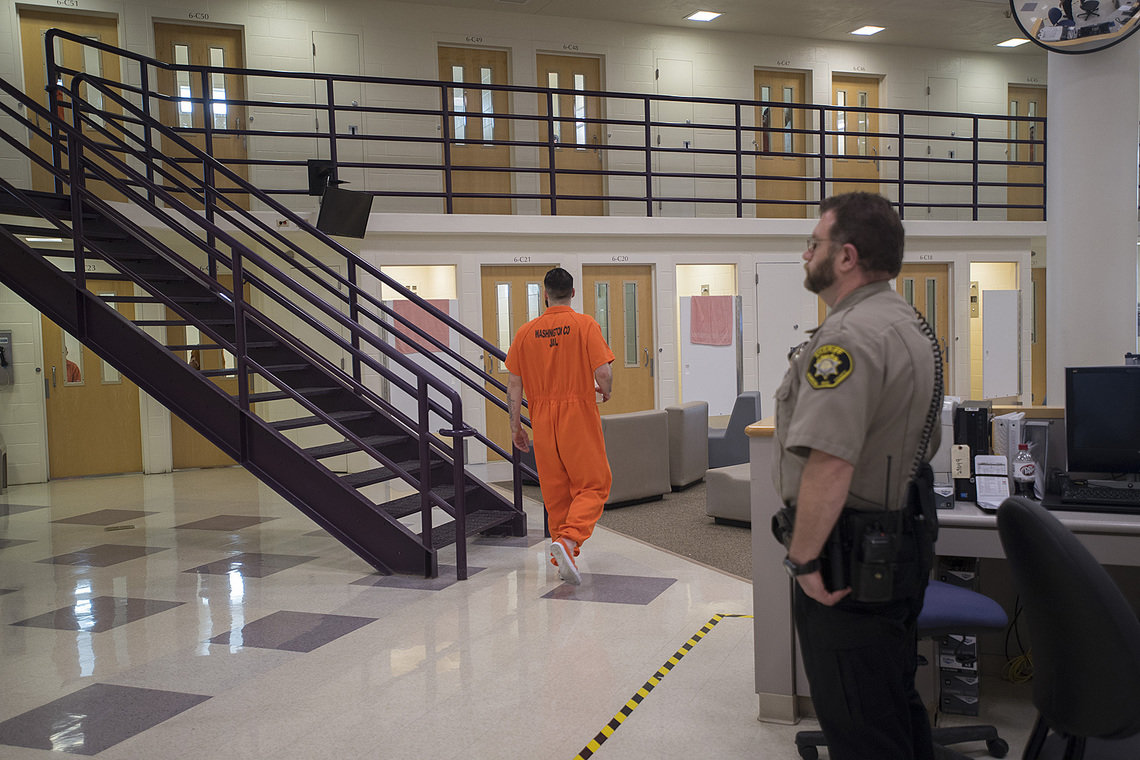 A prisoner walks to his cell at the Washington County Jail in Hillsboro, Ore., as a deputy looks on in 2018.

Rebeka Gipson-King, a spokesperson for the hospital, said the initial admissions policy gave the hospital time to set-up quarantine areas, closed units for high-risk patients, and other preventative measures. Now they are admitting new patients in “cohorts,” which quarantine for two weeks before transferring to a different unit. “Nobody wants people to be waiting in jail longer than necessary,” Gipson-King said. “We’re doing everything we can to make [admissions] as efficient a process as possible, and we’re doing everything we can to protect our current patients.”

As of May 1, there were still no Oregon State Hospital patients with COVID-19, though three staff members had tested positive.

Psychiatric hospitals are wary of new admissions for good reason—many have become coronavirus hotspots. In New Jersey, 194 patients and over 450 staff at psychiatric hospitals have tested positive, and 12 patients have died. Over 140 patients and staff in Michigan have the virus; there have been at least 30 deaths at psychiatric centers in New York. An April survey by NBC News found at least 1,450 cases in state mental health facilities across 23 states and Washington, D.C.

The setup of many psychiatric hospitals—large-scale communal living designed around shared spaces—make them particularly susceptible. Some patients might not be capable of following social distancing and other health guidelines on their own. And though they’re called hospitals, rarely do they have the staff or resources on-site to deal with serious medical emergencies.

“People have this vision of a hospital and inpatient facilities are not like that. It’s congregate living, it’s shared rooms,” said Kathy Flaherty, executive director of the Connecticut Legal Rights Project, which provides legal services to low-income people with mental health conditions. “The whole point of being in a psychiatric unit is to engage with other people, and not to isolate.”

Attorneys for people confined in psychiatric hospitals say most therapy—the reason their clients were hospitalized in the first place—has been reduced in many facilities. (Monitoring the treatment being provided has also been harder, as facilities limit outside visitors or inspectors). Group sessions and other therapeutic activities are cancelled or curtailed. And some already understaffed facilities are now operating with far fewer employees.

Flaherty’s group filed a lawsuit in late April, calling for releases from in-patient facilities and a stop to new admissions, given the high risk of contagion. The same day, Connecticut reported the state’s first psychiatric patient to die from COVID-19. The state has not yet responded to the suit; a spokesperson for the state Department of Mental Health and Addiction Services said they could not comment on pending litigation.

Attorneys in Washington, where one psychiatric patient has died, have made a similar request to reduce the hospital population. In response, the state Department of Health and Human Services said it was speeding up releases for civilly committed patients and looking for more community treatment options.

Even as people fight in court to get out of state hospitals, others are fighting to get in—or at least to be released from jail in the meantime. Their lawyers say that every day spent in jail with treatment delayed can cause lasting harm.

Katie Stanford, an attorney with the Metropolitan Public Defender in Portland, has multiple clients who have spent weeks in this limbo. One has developed a paranoid delusion that police and corrections officers are conspiring for him to be raped and tortured. Another believes staff are tampering with his medication and purposefully infecting him with coronavirus. One young man, who suffers from schizophrenia, asked the judge over and over again at a recent court hearing: When am I going to the hospital?

“They’re decompensating, they’re deteriorating, they’re not taking their medications,” Stanford said. She has asked the court to release many of her clients, but has only been successful in a few cases. The Multnomah County Jail did not respond to a request for comment.

Some defense attorneys have tried a broader approach. In Washington, D.C., the Public Defender Service filed a lawsuit in early April on behalf of people facing misdemeanor charges whose mental competency was in question, given that most of their trials were indefinitely on hold. The plaintiffs were held in the D.C. jail and psychiatric hospital St. Elizabeths, where 13 patients have died and 79 have tested positive. The facilities “are highly occupied, often unsanitary institutions where the social-distancing necessary to mitigate an outbreak of COVID-19 is next to impossible,” attorneys wrote. Of the 57 cases in question, all but 11 have since been released. 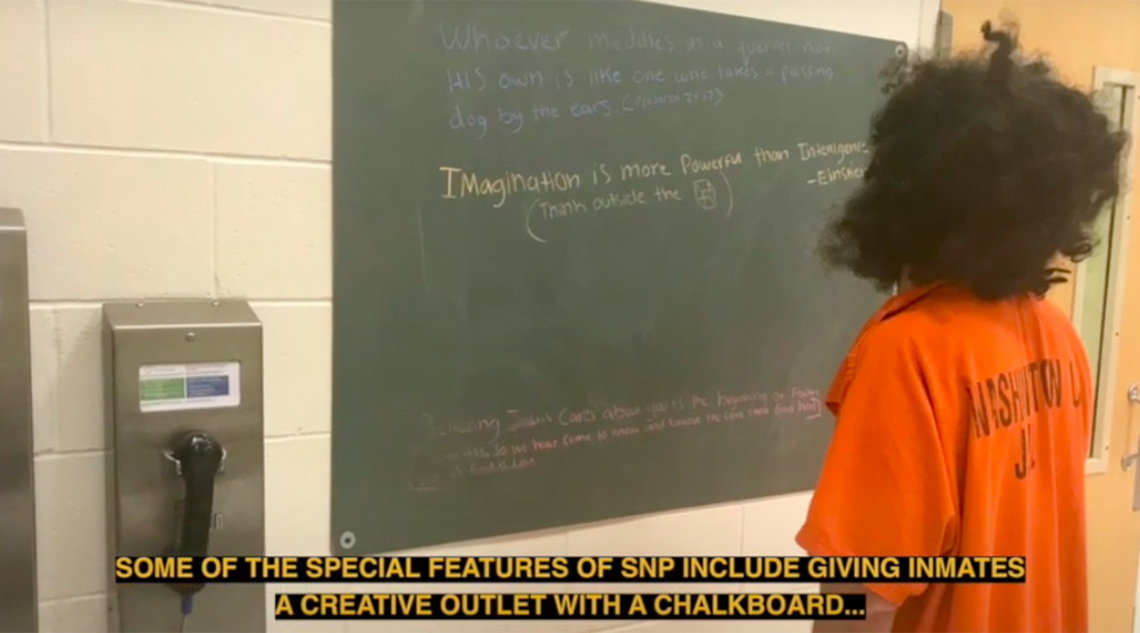 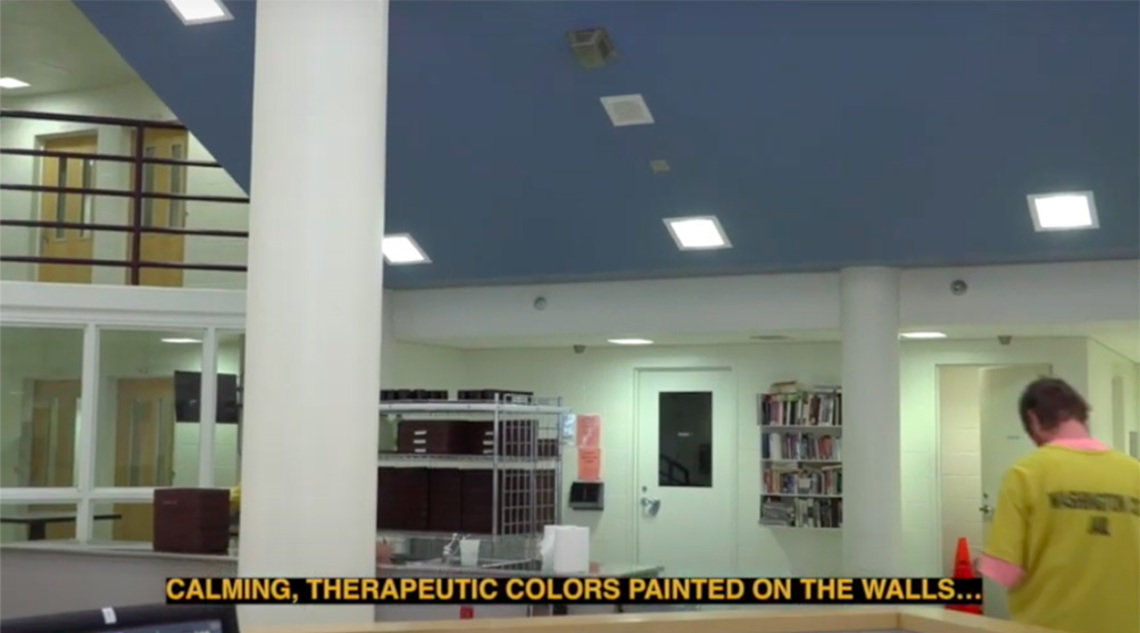 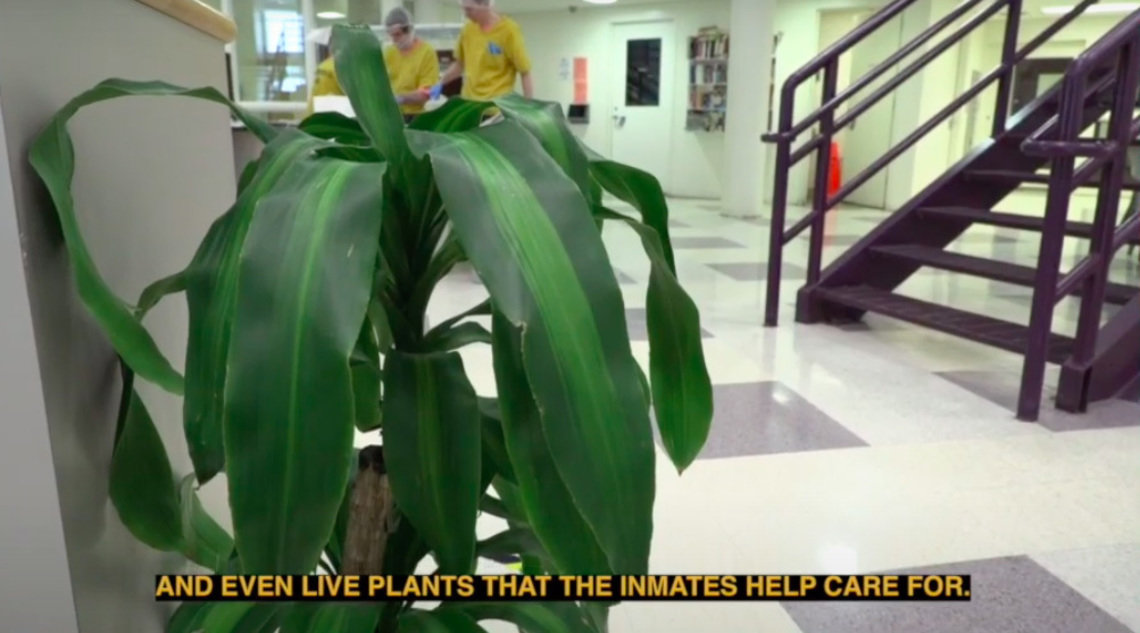 The Hillsboro jail where Keith was held hasn’t yet had any confirmed COVID cases among detainees, though one deputy in the sheriff’s office tested positive in early April. Those with serious mental illness are often housed in a designated “special needs” unit, which includes a “creative outlet with a chalkboard, calming therapeutic colors painted on the walls, and even live plants that inmates help care for,” according to a recent video produced by the department.

In an email, a spokesperson for the sheriff’s department said they currently had four detainees waiting to be hospitalized. “The Sheriff’s Office, as a whole, agrees that jail is not the best option for adults suffering from a mental health crisis and we are committed to doing everything we can to provide care,” Lieutenant Caprice Massey wrote. The housing unit for people with mental illness is staffed with specially trained mental health counselors, she said.

Keith was finally transferred to the hospital on May 12, roughly a month after he was found incompetent.

But for another of Kovacic’s clients, the threat of COVID and the prospect of indefinite detention was enough to secure her one of the few open spots in a community program. She was being held on felony charges in the county jail and faced a long wait to enter the state hospital. Due to her criminal history, she would normally not be eligible for community restoration. But on April 30, a circuit judge ordered her to enter the program, which will help her find housing and provide treatment and legal education classes.

“This might not be the ideal candidate, but times have changed,” Kovacic said. “I think you need to take some risk right now.”