Have COVID-19? Cops May Have Your Neighborhood on a “Heat Map”

By Simone Weichselbaum
Coverage of the COVID-19 pandemic, criminal justice and immigration.

But in the age of coronavirus, police say, the main thing that the street serves up is risk. The strip has been a hot zone on the “heat map” of COVID-19 that cops are keeping based on addresses of people infected, which the police get from the county health department. The map is used to alert cops, firefighters and parks department workers so they can take extra safety measures in high-infection areas.

So when protests against police violence snake through hot zones, cops know they need to be vigilant about taking health precautions there. If the demonstrations end, the police plan to resume sending a social-distancing detail to the strip to hand out bilingual flyers with illustrations about staying six feet apart.

But not yet. “Right now the public wants to march and we have to listen,” said John J. Mueller, the police commissioner. “How can you enforce social distancing? The conversation at hand has really trumped COVID.”

Heat maps are up and running in cities from New York to Florida, and have become one of the most innovative—and most controversial—policing techniques to emerge from the COVID-19 crisis. 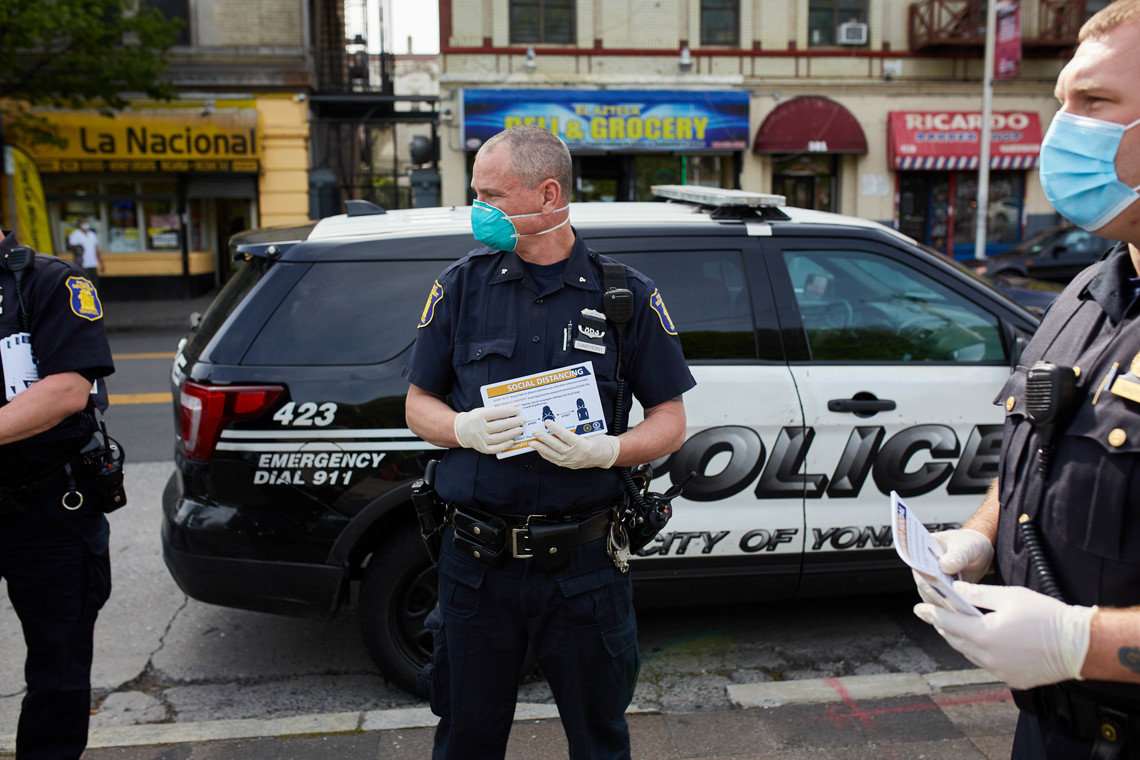 Brad Ogbonna for The Marshall Project

The release of health data to law enforcement has already come under fire as violations of Americans’ privacy. After pushback from civil liberties groups, Tennessee's governor announced last month that state health officials would stop sharing the names and addresses of the sick with law enforcement agencies.

Police reform experts are wary that cops won’t fully divulge how they are using virus tracking data even if they argue it's to protect officers’ health. “Law enforcement has historically not been keen to provide access to oversight boards and lawmakers about what they are doing with the data that they collect on people,” said Michael Sisitzky, lead policy counsel with the New York Civil Liberties Union.

Critics also worry that having information on infection locations will make officers reluctant to work in hard-hit areas, especially in minority communities that already have strained relations with law enforcement. Cities like Boston have managed to have cops hand out face masks instead of citations, without using heat maps.

Police and health officials who work with heat maps stressed that they aren't using the tool to arrest people infected. But in interviews, officials conceded that there’s no uniformity in how police departments have adopted the technology, or which specific data is going into the map’s design.

The approximately 40 police departments throughout Westchester County, just north of the Bronx, can obtain the identities of those sick with the coronavirus, said John Nonna, the county attorney. But mapping the data is not something the county approved.

In Yonkers, “The heat maps are something they decided to do,” said Nonna, who emailed The Marshall Project a copy of the agreement signed by the Yonkers Police Department. The document specifies that names and addresses of those under “isolation orders” can be shared with police, which is in accord with U.S. Health and Human Services guidance. 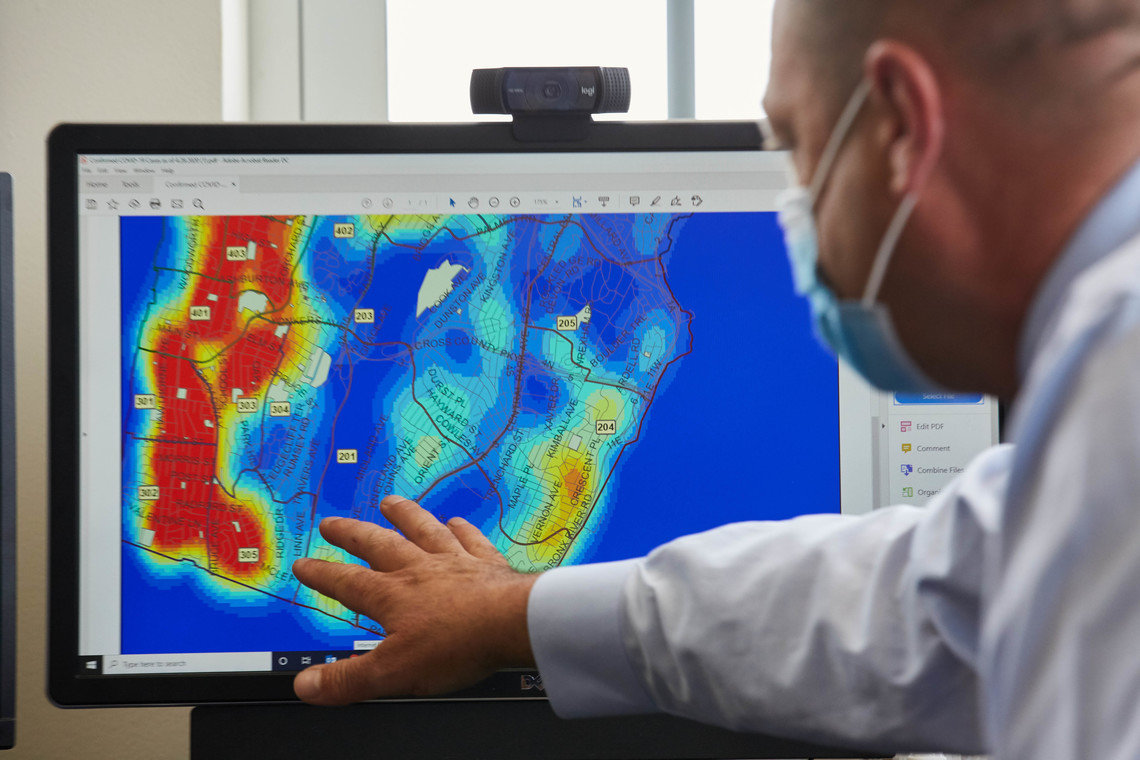 Yonkers Police Commissioner John Mueller shows a map of where COVID-19 cases have spiked in Yonkers.

Brad Ogbonna for The Marshall Project

Mueller, the Yonkers police commissioner, invited The Marshall Project to watch how cops use the map, saying he’s being fully transparent. For starters, he said, his heat map doesn’t identify the names and specific apartments of the sick—although the county did agree to give out such details. That information is given to 911 operators who warn officers when they are heading to an address with a known infection.

The police heat map, updated weekly with new cases, is shared with other city agencies. Sanitation officials converted an old fire truck with a disinfectant hose to spray down bus stops and public benches throughout “hot zones.” Parks Department employees go in areas with emerging outbreaks to make sure playgrounds and athletic fields are closed.

Mueller says the heat map keeps first-responders healthy while slowing down infections across Yonkers—all without resorting to aggressive behavior.

Cops on the social-distancing detail measured residents’ compliance, not through traditional enforcement benchmarks—citations and arrests—but by counting dispersed crowds. Officers returned to parks and street corners where they had handed out COVID-19 information cards, and then reported in a database whether people had cleared.

As of late May, police in Yonkers had arrested only one person since the statewide lock-down began in March, according to the Westchester County District Attorney’s Office. A 35-year-old man, not wearing a mask and standing in a small crowd, was charged with disorderly conduct on April 25 after he cursed out cops who tried to hand him a flyer, officials said. The man was not held in police custody and was given a summons.

“We certainly agree with YPD's approach,” said Helen Jonsen, a spokeswoman for the Westchester district attorney.

In California, many police departments are using public health data to flag locations with known infections to help cops out on patrol, said Eric R. Nuñez, president of the California Police Chiefs Association. “We aren’t using these lists to do enforcement action.”

But about a third of the association’s 332 member agencies haven’t been able to get their local health departments to share address data for active COVID-19 cases, said Nuñez, who heads the Los Alamitos Police Department in Orange County. It’s one of the agencies that hasn’t gotten the information.

The Orange County health department said in a statement that sharing personal information about people who have coronavirus diagnosis “violates protection of their privacy.” Marc Meulman, Orange County's chief of operations for public health services, noted that proper precautions “should be taken at all times” because the virus is spreading throughout the county.

In Miami, the police department says it uses its heat map to figure out which cops might have been exposed and keep them from spreading the virus. Law enforcement officials download addresses of known cases from the Florida Department of Health in Miami-Dade County, and then share the information with 911 operators. Cops who spend more than a few minutes at a location with a COVID-19 case are pulled off the street for testing.

“If we have officers who’ve been exposed it winds up being very difficult for us to justify sending them to other houses where they could be potentially spreading other infections,” said Eldys Diaz, executive officer to the Miami Chief of Police.

Less than 2 percent of Miami cops have tested positive for COVID-19, according to department data, a low rate compared to other big city law enforcement agencies. The New York Police Department, at the height of the outbreak, had an infection rate of nearly 20 percent, according to the NYPD’s daily coronavirus report.