Nothing Has Made Me Feel More American Than Going to Jail

I was born in D.C. to South Indian parents. But it wasn’t until I had to negotiate the criminal justice system that I fully realized what many Americans of color have to deal with. 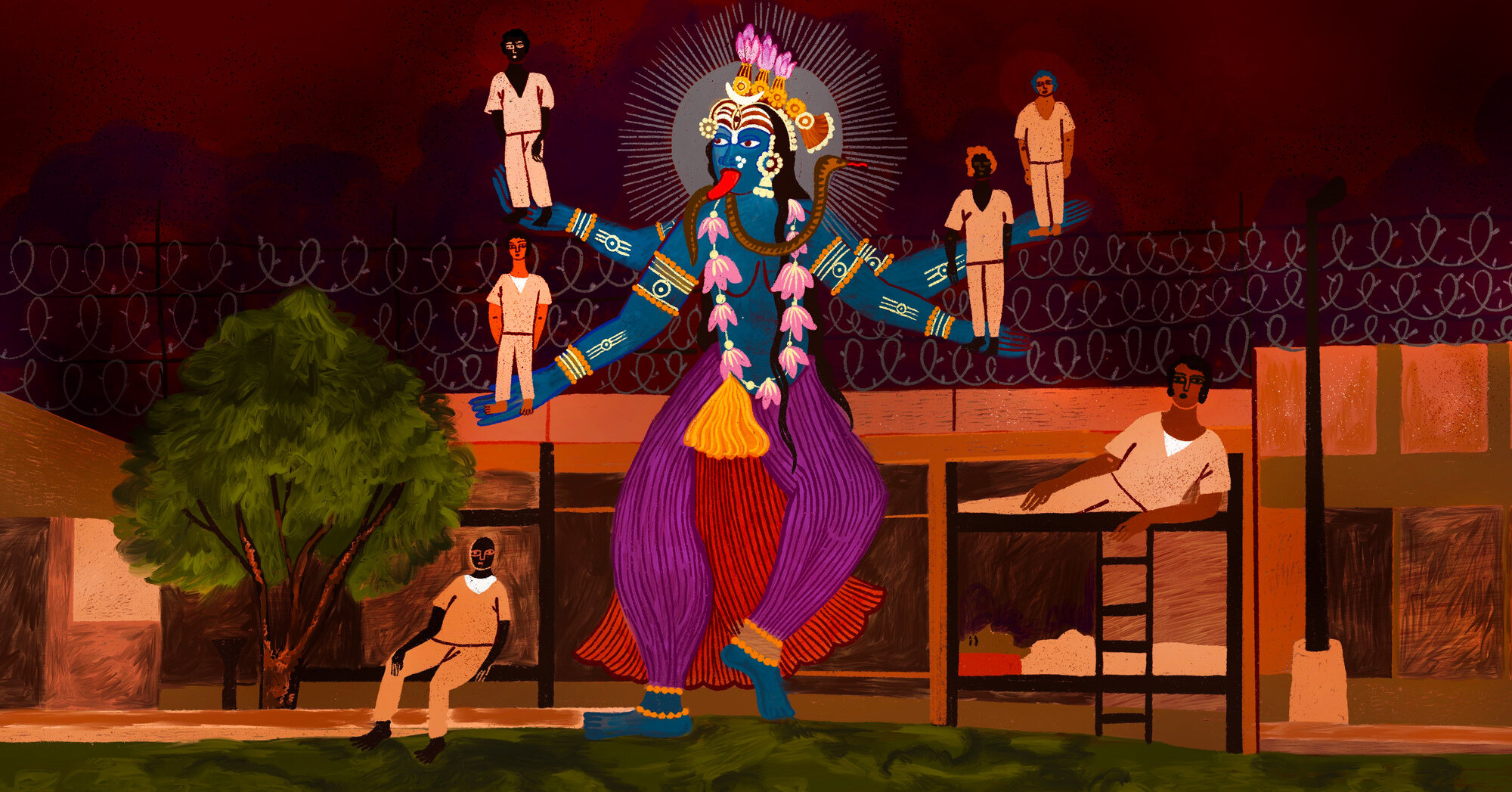 Manuja Waldia for The Marshall Project
By Ravi Shankar
Perspectives from those who work and live in the criminal justice system. Sign up to receive "Life Inside" emailed to you every week.

Hartford Correctional Center (HCC) is located on an urban stretch near car dealerships, fast-food restaurants, a seedy-looking motel and an enormous post office. Driving by, you might not even notice it, except for the glinting barbed wire encircling the grounds.

As an English professor at Central Connecticut State University, and someone who had lived in six countries, I never expected that HCC would become one of my homes. But then I violated my probation for a misdemeanor* by driving with a suspended license. I was sentenced to 90 days of pretrial detention to “satisfy the state.”

Whenever I hear that phrase “satisfy the state,” I visualize the fanged Hindu goddess Kali, with her long lolling tongue, flailing multiple arms and necklace of decapitated human heads. I think of a goddess who needs to be propitiated with human sacrifice. I probably make that association because I am a Tamilian Brahmin American whose parents immigrated from South India in the 1960s. Though I was born in Washington, D.C., and I have largely benefited from the very systems of discrimination that I would later suffer, I haven’t always felt like an American.

As it turns out, nothing made me feel more American than being incarcerated. Before I went to jail, I was peripherally aware that our criminal justice system tilts the axis of power toward those who create the laws and exert political influence. But it was not until I had to personally negotiate the criminal justice system that I fully realized what many Americans of color have to deal with on a regular basis.

HCC, according to the Department of Corrections website, is a “level 4, high-security urban jail” that “holds primarily pretrial offenders.” While I had heard that it is not the place where hardened criminals go to do real time, I was petrified. I had watched the fictional TV show “Oz” and knew about the real-life abuse Kalief Browder endured on Rikers Island.

What I didn’t expect was to be admitted around midnight. I was led down a brightly lit hallway into a gymnasium where I would join a mass of human beings in jagged rows. A few of the men were wrapped in blankets, like corpses. Others were on their mattresses shivering or having what looked like seizures. Some men were huddling together or gesturing in the air with inscrutable resolve. Others were splayed out, prone and eerily motionless.

I received a flame-retardant mattress and a gray plastic “boat” — a stackable bunk without any parts that could be weaponized — and I anchored among a hundred other men. I couldn’t imagine that this was legal under the city’s fire code, but it was common practice. Exhausted, I spread my sheet and blanket atop the mattress and rolled an extra T-shirt into a lumpy pillow. The gym, which was still lit despite the late hour, looked like a makeshift shelter after nuclear fallout.

From where I lay, I could see an unfinished mural with half of the Connecticut state seal and its Latin motto: Qui Transtulit Sustinet — “He who transplanted sustains.” Some see the state motto as positive evidence of rugged Yankee individualism. But it reminded me of the violent displacement of Indigenous peoples by early Puritan settlers. These settlers used public whipping, branding, dunking, pillory, mutilation and even execution to enforce a legal code that made little distinction between religious and criminal transgressions. In time, reformers moved away from the brutality of the scaffold to the silence of imprisonment. By design, prisons don’t allow the public to see what transpires inside.

On the first of 90 nights I would spend incarcerated, I was transplanted — but not sustained. I only needed to look down at the laminated ID clipped to my prison tans to know that my outside credentials no longer mattered. Nonetheless, I had relative privilege: My pretrial detention was stretched out over a year to allow me to work, an option I only had because I could afford a private attorney.

In retrospect, I would have preferred to have done my 90 days in one stretch. Each time I had to spend a holiday break coughing, spreading my ass cheeks and putting on ill-fitting tans in front of correctional officers who called me “Big Bang Theory,” I was humiliated and dehumanized and traumatized anew.

And inside HCC, I found little hope for rehabilitation or effective reentry assistance. Books were systematically removed from our dorm, medical requests were ignored, and there was a casual sadism that pervaded everyday life. It was meant to destabilize and confuse the incarcerated population and actively prevent healthy reintegration.

For example, there was a basketball court where one hoop was 8 inches higher than the other. This practically ensured that any full-court game would result in a skirmish and someone getting written up. Breakfast was served before 6 a.m., lunch at 10:30, and dinner at 4 in the afternoon. By the time evening rec time rolled around, everyone would be ravenous. Staff opened our letters and confiscated photographs, even if they were of a son or daughter on the first day of school. One C.O. responsible for assisting those with mental health issues would announce his shift by trumpeting, “Screws and schizos, come get your Skittles!”

Many of the men I met inside had mental health and drug problems, but they did not belong in prison. Outside, their families were suffering. Inside, many were just becoming more hardened.

Still, the most difficult time in my life was a blessing in disguise. Had I not been incarcerated, I never would have met those men or seen firsthand the maddening conditions in which they lived. Their reflections, which I share in a forthcoming memoir called “Correctional,” were heartbreaking, profound and enraging. I also saw the difficulties that previously incarcerated people have in finding employment and moving forward with their lives.

In my brief time inside the glinting jaws of the prison industrial complex, I didn’t experience any trace of a goddess. But I did feel the digestive pressure of an institutional organ designed to make invisible the men and women traveling through its intestines. I also saw astonishing resilience, redemption and the possibility of growth. It made me certain that personally, collectively, legally and ethically, we must aspire for a far better solution in policing our communities and redressing harm. Punishment is a red herring that prevents us from understanding the historical, economic and racial roots of mass incarceration and the system’s role — not in preventing crime, but in perpetuating trauma and social inequality.

Ravi Shankar is a Pushcart prize-winning poet, translator and former professor who has published over a dozen books. He has appeared in print, radio and TV in such venues as The New York Times, NPR, BBC and the PBS NewsHour. His memoir, “Correctional,” is forthcoming in October 2021 with University of Wisconsin Press.

In response to the allegations of medical neglect and racist and ableist comments from correctional officers, Connecticut Department of Corrections public information officer Andrius Banevicius wrote in an email that at the time of these events, “inmate medical services” were contracted out to the University of Connecticut Health Center, and that the “Connecticut Department of Corrections holds its employees to high standards of professional and ethical conduct and the behavior you referenced is not tolerated.”

*Piece has been updated since publication to convey the degree of the charge.