The Awakening of Thurgood Marshall

The case he didn’t expect to lose. And why it mattered that he did.

By Gilbert King
Looking Back at the stories about, and excerpts from, the history of criminal justice.

From time to time, The Marshall Project will look back at the history of American justice and injustice. We begin with a watershed moment in the life of our namesake.

He didn’t know it then, but when Thurgood Marshall boarded an Oklahoma-bound train at New York’s Pennsylvania Station in January of 1941 to defend a young, black sharecropper accused of murdering a white family and burning down their home, he was just days away from the case that would fortify his commitment to overhauling the criminal justice system as he knew it. The murder trial of the sharecropper, W.D. Lyons, would be a watershed moment in Marshall’s career as a lawyer, and despite the fact that he lost the case, which ultimately led to a rare and devastating defeat before the U.S. Supreme Court, the special counsel for the NAACP’s Legal Defense and Educational Fund would leave Oklahoma with an unbridled hope for the future.

The Lyons trial wasn’t Marshall’s first criminal case. He had, in fact, already argued and won Chambers v. Florida before the Supreme Court, which ruled unanimously that coerced confessions by police are inadmissible at trial. The court’s 1940 opinion, however, had done little to stem the tide of police beatings during the interrogation of black suspects in the Jim Crow South. Marshall and his team of LDF lawyers had their desktops piled high with capital cases in which suspects’ confessions were believed to have been compelled by law enforcement officers through duress. 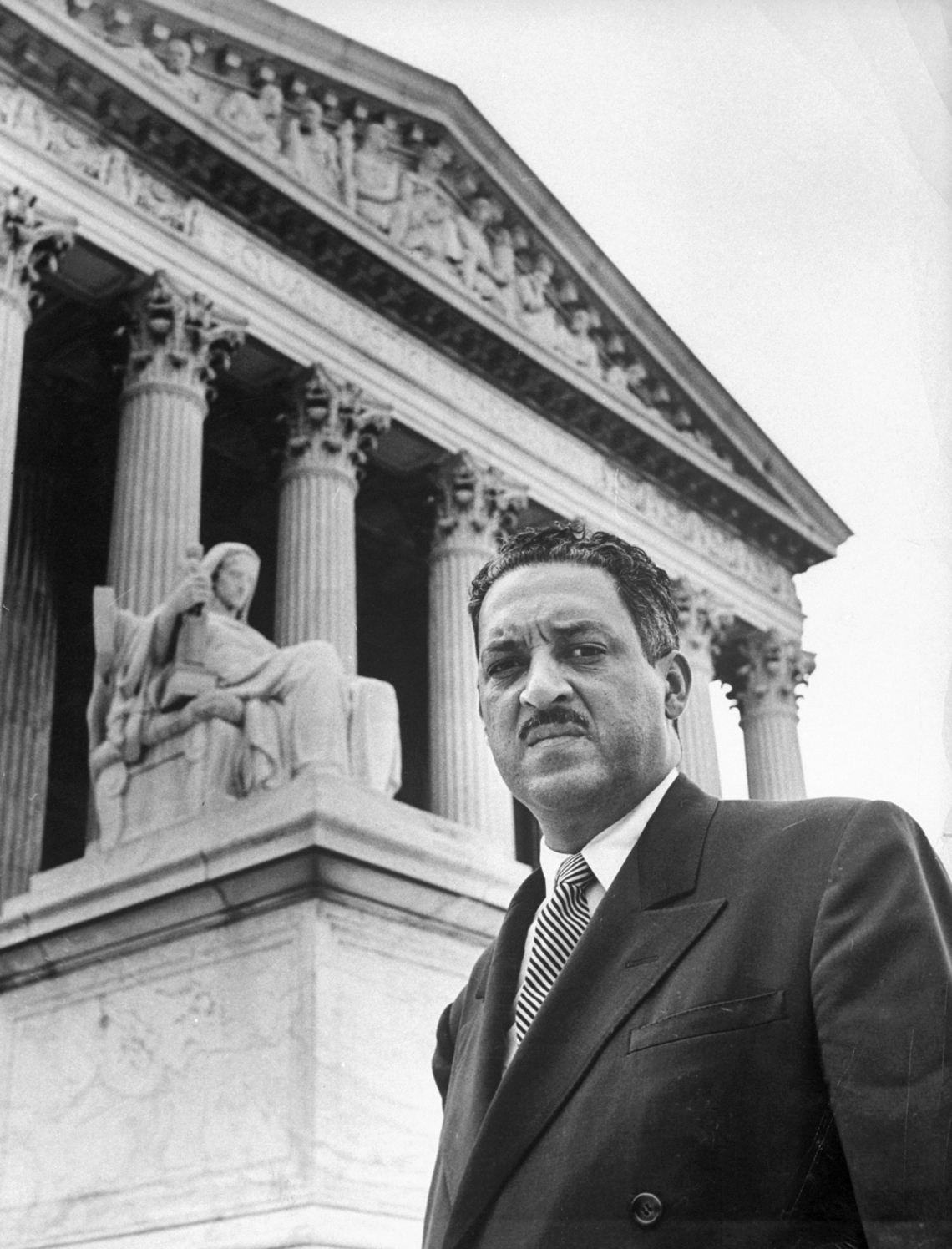 Thurgood Marshall outside the Supreme Court building in 1955.

The case that brought Marshall to Hugo, Okla., in 1941, was one of the most extreme. On the evening of Dec. 31, 1939, Mr. and Mrs. Elmer Rogers had been attacked (by ax and shotgun) and killed in their home. Their tenant house was then doused with coal oil and set afire, and 8-year-old James Rogers managed to flee the home, carrying his baby brother, Billie Don, to safety. Four-year-old Elvie Dean Rogers perished in the blaze.

Newspapers at the time reported that officials from the Fort Towson prison camp (adjacent to the Rogers home) had allowed prisoner-trustees to go on unsupervised hunting expeditions with shotguns, and even gamble and consume alcohol with local residents. After a farmer signed an affidavit claiming that he had witnessed three convicts enter the Rogers home on the night of the murders, warden Jess Dunn promptly closed the prison camp and shuttled all convicts to the more secure state penitentiary in McAlester. A camp sergeant was soon fired amid reports that two convicts, who had lost $90 to Rogers in a dice game earlier that evening, had been arrested after confessing to the murders. But Oklahoma Gov. Leon Chase Phillips surely sensed in the lax discipline at the prison camp the potential for a crippling political scandal. He dispatched his special investigator, Vernon Cheatwood to Fort Towson, and after Cheatwood’s investigation, the two arrested convicts were released1, and an illiterate, 21-year-old black sharecropper, W.D. Lyons, was arrested by local police.

Over the course of the next two days, Lyons was beaten senseless and told to confess to the murders. Denied sleep and food, and still groggy from the beatings, Lyons was visited in the middle of the night by the special investigator, who approached with a large black pan, which he dropped in the sharecropper’s lap. “There’s the bones of the baby you burned up,” Cheatwood told him.

Superstitious and in fear for his life, Lyons broke down as Cheatwood grabbed him by the neck and pushed his face into the pan. Only a confession would end his agony, Lyons was told, and the young sharecropper quickly obliged. He later stated that he confessed twice because he “didn’t want to be tortured anymore” and “couldn’t stand any more of the beating.”

In an uncharacteristically slow crawl toward justice, Lyons lingered in prison. Marshall believed that the Choctaw County attorney was “scared to try the case for a whole year” because the Fort Towson prison camp scandal might erupt again and become an issue in local elections.

By the time Marshall arrived in Hugo, word had already spread that a “nigger lawyer from New York” was on the case. The courthouse was packed with locals, and when he assumed his seat at the counsel table, Marshall wryly observed, “the building did not fall and the world did not come to an end.” Still, Marshall noted that the jury was “lousy” and there was “no chance of winning here.” He vowed to “keep [the] record straight” for the inevitable appeal2.

Over the next few days, Thurgood Marshall would have a difficult time concealing his excitement over the changes he was sensing in the courtroom, and how that might play out more widely in the criminal justice system. Before the judge and prosecutor, Marshall argued to suppress Lyons’ confessions. He cross-examined local police, predicting that they might “become angry at the idea of a Negro pushing them into tight corners and making their lies so obvious.” His strategy, he noted, “worked perfect.” By noon recess, Marshall observed, the crowd in court had “about doubled,” as word began to spread that a black lawyer was putting on a great show.

Marshall called to the stand white relatives of the murder victims, eliciting testimony that Vernon Cheatwood had admitted to them that he beat Lyons “for either six or seven hours.... I haven’t even got to go to bed.” Then Marshall had a go at the governor’s special investigator himself, and by the time the lawyer was done, Cheatwood was, as one newspaper described, “shaking as though suffering from palsy3.”

“Boy, did I like that,” Marshall wrote at the time, “and did the Negroes in the courtroom like that.” White people, too, were stopping Marshall in the halls, expressing support for Lyons and disdain for their local police, who had so obviously lied on the stand. The father of the murdered woman even joined the NAACP to emphasize his belief that Lyons had been framed in the killing of his daughter and her family. The young lawyer could barely contain his excitement in a letter he wrote from Oklahoma to Walter White, the executive secretary of the NAACP in New York. “You can't imagine what it means to these people down there who have been pushed around for years to know that there is an organisation that will help them. They are really ready to do their part now. They are ready for anything4.”

“One thing this trial accomplished,” Marshall added, “the good citizens of that area have been given a lesson in Constitutional Law and the rights of Negros which they won't forget for some time. Law enforcement officers now know that when they beat a Negro up they might have to answer for it on the witness stand.”

Despite Marshall’s ebullience, the jury deliberated for more than five hours, ultimately returning with a guilty verdict that brought Lyons a sentence of life imprisonment. The lawyer took it in stride, noting that while the prosecutor had sought the death penalty for a heinous crime where three people were killed, “cut up with an ax and then burned,” the jury’s decision “shows clearly that they believed him innocent5.”

Marshall was confident that in his appeal for Lyons, he had a “sure winner under the recent U.S. Supreme Court decisions.” But he had the rug pulled from under him, suffering his very first defeat before the Supreme Court. (Marshall would lose only three of the 32 cases he argued there.) In a 6-to-3 decision that was inexplicable to him, Marshall learned that the court affirmed the conviction, ruling that Lyons’ second confession, made hours later, was obtained without coercion. Justice Frank Murphy dissented: “To conclude that the brutality inflicted at the time of the first confession suddenly lost all of its effect in the short space of 12 hours is to close one’s eyes to the realities of human nature6.”

The decision, which Marshall openly criticized in a rare display of anger, amplified for him the harrowing and tenuous position of placing a client’s fate in the hands of the Supreme Court. He was consoled only by the fact that he had managed to save Lyons from the electric chair. For years, Marshall advocated for his client’s early parole, often sending his own money to Lyons at the Oklahoma State Penitentiary at McAlester. After serving twenty years of a life sentence, Lyons was finally approved for parole in February 19617.

Still, the surge of money that flowed into the NAACP’s New York office after the Lyons case was not lost on Marshall, and the “lesson in Constitutional Law” that he brought to that Oklahoma courtroom in 1941 left a lasting impression. Despite his successes in landmark civil rights cases involving voting rights, the desegregation of schools, and racially based restrictive covenants in real estate, Marshall would later observe that his criminal cases were even more important because “they saved lives.”

Throughout his life, the lawyer, judge, and eventual Supreme Court justice would effectively hold a mirror to the deep racial gaps in the criminal justice system. Marshall’s tales of endless miles on the road and rail, risking his life to defend the powerless and falsely accused, were told, countless times, to spellbound justices and clerks alike. Stories, Sandra Day O’Connor said after Marshall retired from the Supreme Court, that “would, by and by, perhaps change the way I see the world.”

Gilbert King is the Pulitzer Prize-winning author of Devil in the Grove: Thurgood Marshall, the Groveland Boys, and the Dawn of a New America.