Notes from a Boston courtroom.

There's a case of "I told you so" unfolding in Courtroom 9 of the federal courthouse in Boston.

U.S. District Court Judge George A. O'Toole Jr. is presiding over what has been an unusually slow, tedious process: selecting the jury that will hear the case against the accused Boston Marathon bomber Dzhokhar Tsarnaev.

It has proven much harder than O'Toole envisioned, with so many prospective jurors expressing bias against the defendant, and that has emboldened Tsarnaev's lawyers to tell the judge they told him so — even as they make repeated requests to move the trial to ensure they can raise the venue issue on appeal should Tsarnaev be convicted.

Many prospective jurors have proved unsuitable because they say they have formed unshakable opinions that Tsarnaev is guilty, thanks to the avalanche of publicity since the April 15, 2013, bombings that killed three people, tore the limbs of 17 others, and injured more than 200 more. 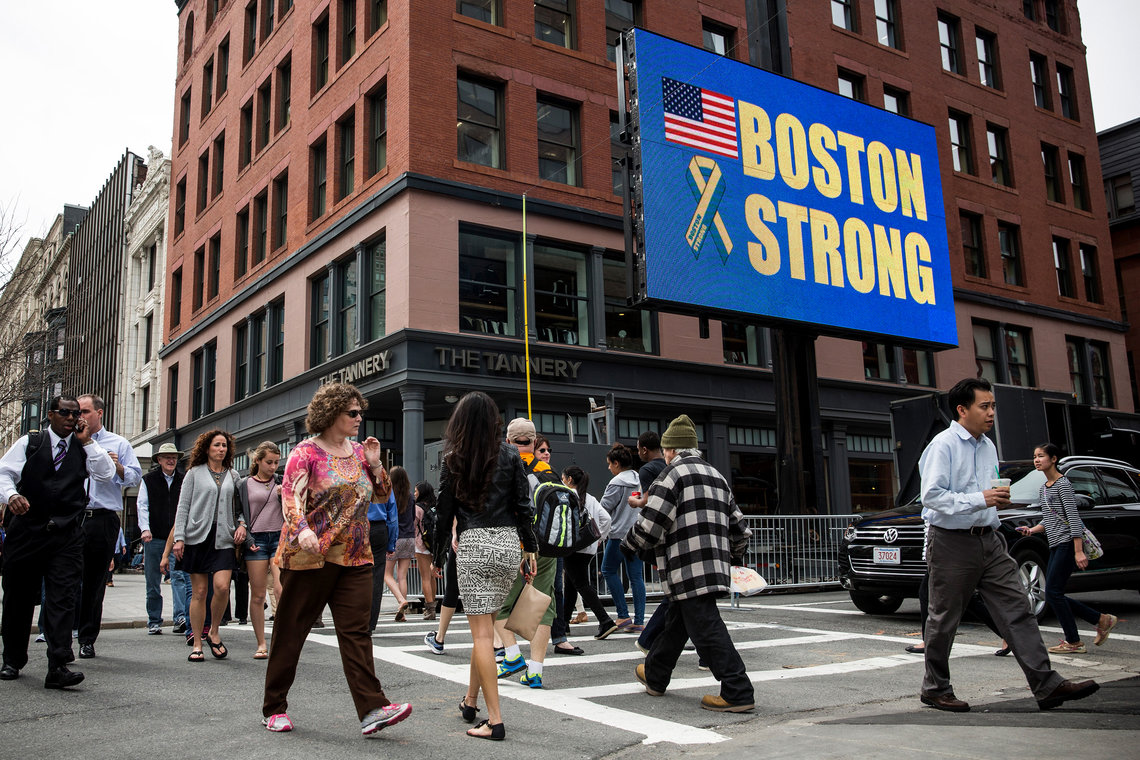 A electronic billboard near the finish line of the Boston Marathon in April 2014, a year after the bombings.

This is exactly the scenario Tsarnaev's defense team warned against when repeatedly asking O'Toole to move the trial out of Boston. The obvious bias of so many prospective jurors is also playing out in a sort of six degrees of separation, in which a not insignificant number of them have connections with the assorted players in the case. One woman was the neighbor of the special agent in charge of the FBI in Boston. One man was the mentor of the police officer who rushed to the side of fatally wounded MIT police officer Sean Collier, whose murder in the midst of the manhunt for the bombing suspects is also one of the charges facing Tsarnaev. Another woman had met Martin Richard, the 8-year-old boy killed in the bombing, at a neighborhood clean-up.

Another problem is that many prospective jurors are reluctant to sit for a trial that could last anywhere from three to five months. One juror told the judge that some prospective jurors were sitting around the jury assembly room discussing how to get excused.

Tsarnaev's defense team, meanwhile, has expressed increasing frustration with Judge O'Toole's lack of specificity in asking jurors how and why they formed opinions about Tsarnaev's guilt. David Bruck, one of Tsarnaev's lawyers, has repeatedly complained that the judge's questions are too vague and don't get into prospective jurors' thinking process.

Last week, Bruck suggested that the way O'Toole has interviewed jurors, asking them if they can suspend their preconceived notions about the case, is perfunctory at best.

“The question, ‘Can you put that aside?’ asks them to do a very sterile and meaningless exercise,” Bruck said. “What is happening here is not adequate and will not provide for a fair and impartial jury.” He later added, “We do contend this case can’t be tried in Boston. Nothing that has happened [during jury selection] has led us to change” our opinion.

Empanelling juries in high-profile cases is "a problem we face commonly,” O’Toole said, and his experience was that it is valid to examine jurors about their “self-assessment” of impartiality.

As for preconceived notions shaped by publicity or human interaction, “There is no scientific way to answer how…a juror will stick to them or be open to alter them at trial," the judge said. "Can they do that faithfully, without requiring the defendant to prove he’s not guilty?” The judge answered his own rhetorical question, telling Bruck, “I understand your view on it. I think the way we’ve been handling it is proper.”

Miriam Conrad, chief of the federal public defenders office in Boston and one of Tsarnaev's lawyers, picked up where Bruck left off, making it clear that the defense does not think O'Toole's questioning goes much below the surface.

“The focus of voir dire should be to probe the jurors’ preconceived notion of guilt,” she said, not simply to instruct them that they shouldn't feel that way. “The goal of voir dire is not to extract a promise, or to order them to put aside their presumptions,” but to find the basis of those presumptions.

“We can keep debating this," the judge said in a tone that suggested he would rather not.

The most obvious comparison to the Tsarnaev trial — a terror trial, extensive media coverage — is the case of Timothy McVeigh, who blew up the federal building in Oklahoma City in 1995. It is that case Tsarnaev's lawyers cited most often in their first two motions seeking to move the trial out of Boston. They argued that, as McVeigh’s victims included the entire community of Oklahoma City, the five million people of eastern Massachusetts were collectively victimized by the Boston Marathon bombings and by the subsequent manhunt and virtual lockdown of the city.

“The community impact here is even greater than that present in [Oklahoma]” they wrote, “given that the bombings occurred at the Boston Marathon on the day thousands of Bostonians and others from the region gathered to celebrate the runners, the Red Sox, and Patriots Day.”

He also told me he disputes the Tsarnaev defense team's assertion that the Boston’s scars surpassed those of Oklahoma City, where 168 people, including 19 children, were killed more than 500 were injured, and more than 300 buildings were damaged or destroyed, including the federal courthouse itself where the bombing trials would have been held had they remained in Oklahoma. (Here is the link to the 1996 order by U.S. District Judge Richard Matsch moving both the McVeigh and Terry Nichols trials to Denver)

Advised that a poll carried out by Tsarnaev's defense team found that 58 percent of people thought Tsarnaev was guilty, Jones said he was surprised the figure wasn't much higher. Although Jones was able to convince a judge to move McVeigh's trial to Colorado, McVeigh was found guilty and was executed.

According to lawyers and judges I've talked to, in his years as a federal judge and as a state judge before that, Judge O’Toole had little experience in conducting seriously probing voir dires. Massachusetts has traditionally had the most limited voir dire process in the country, in both federal and state courts. Typically, it consists of just a few questions, usually posed by the judge.

O'Toole has let both prosecuting and defense attorneys pose limited questions, too, but he has consistently reined in the defense when their questions get too specific, especially when probing about how biases were formed.

The defense contends O'Toole, appointed to the federal bench in 1995 by President Clinton, is not doing nearly enough to get at what jurors are really thinking and is instead almost coaching them to say the minimum — so that a sufficient number can proceed to the next stage of jury selection.

Last week, the defense filed its third request for a change of venue, noting that its review of the 1,373 questionnaires filled out by prospective jurors found that "an extraordinary 85 percent of prospective jurors either believe Mr. Tsarnaev is guilty, or have some self-identified 'connection' to the case, or both."

"Stronger support for a finding of presumed prejudice in Boston is difficult to imagine, and the existing record precludes a fair trial in Boston," the defense wrote in its most recent motion.

"Rooting out the overwhelming prejudice — even with the most thorough voir dire imaginable — is a quixotic undertaking that cannot overcome prospective jurors' powerful emotional connections to this extraordinary event. Those few jurors who survive the winnowing process of voir dire will not be representative of the community.”

(O'Toole, who was miffed that the defense quoted directly from juror responses on the questionnaire, sealed the motion and hasn't ruled on it yet. I made a copy of it before it was sealed.)

The insistence on more aggressive interrogation of potential jurors contains an element of risk for the defense. Friends of Tsarnaev lawyer Judy Clarke, who is famous for saving her clients from the death penalty, say she thinks it is impossible to get an impartial jury in Boston, but that she also knows her best chance of saving Tsarnaev from the death penalty resides in the Boston area, given the widespread opposition to capital punishment.

As of Friday, after the first two weeks of the voir dire, O'Toole has managed to question just 115 prospective jurors. It's unclear how many have passed his muster and survived challenges for cause by both the prosecution and defense. O'Toole won't say, and lawyers for the Boston Globe filed a motion Wednesday asking O'Toole to provide at least a running count of how many prospective jurors have been selected to go to the preemptory challenge stage. He needs about 70 to get to the next stage, when 23 preemptory challenges each by the defense and prosecution will leave a group of 18 jurors, including six alternates.

The judge seems quite willing to wait as long as it takes.

"I think we're making good progress," he said. "Progress isn't always measured by how long it takes to get a result."

Kevin Cullen is a columnist for The Boston Globe. He is covering the Tsarnaev trial, and tweeting a play-by-play account of the testimony @GlobeCullen. He can be reached at cullen@globe.com.