Just Buy the Boy a Bike

Police officers and their commanders throughout the two biggest cities in Minnesota have spent years figuring out how to better monitor the activities of the country’s largest pocket of Somali immigrants, an enclave centered in Minneapolis-St. Paul, where, officials say, violence and recruitment to overseas terror groups are an ongoing problem.

Their successes were praised by the Obama administration during a three-day meeting this week, dubbed the “Countering Violent Extremism Summit,” which highlighted how the Twin Cities, Boston, and Los Angeles were rooting out homegrown terror suspects.

On the surface, it would seem that the police who are part of these initiatives — described by the White House as a way to “foster partnerships between local government, law enforcement, mayor’s offices, the private sector, local service providers, academia, and many others who can help prevent violent extremism” — are engaged in an aggressive surveillance strategy.

At least 22 men have left Minnesota for Somalia since 2007 to join the militant group al-Shabab. This week, federal prosecutors indicted a Minneapolis teenager accused of trying to board a plane to Turkey with the goal of joining ISIS.

But, according to commanders in Minneapolis and St. Paul, their strategies were grounded in classic police tactics. “It’s community policing on steroids,” said Assistant Chief Todd Axtell of the St. Paul Police Department. “Radicalization can apply to terrorism or to gang activity. It is the same brainwash. Creating safe spaces for our kids to interact with law-enforcement is the recipe to keeping kids away from that activity.” 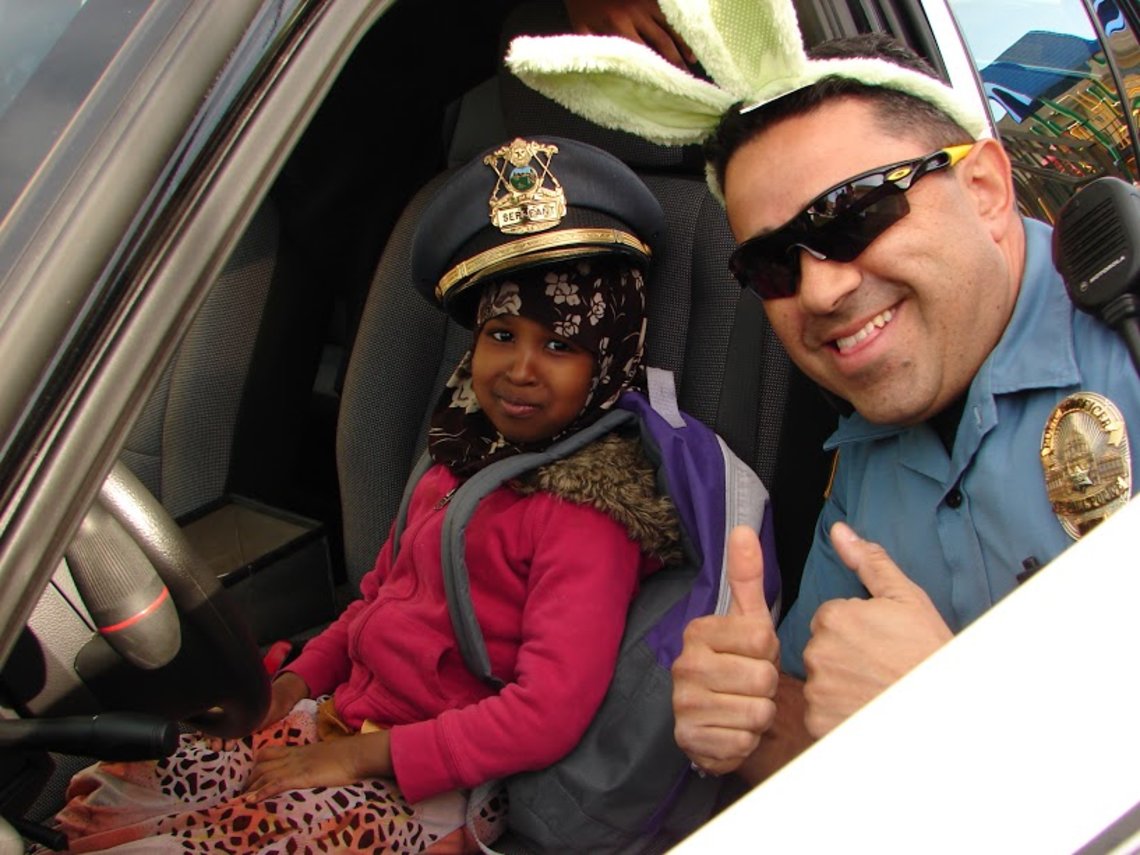 A member of the St. Paul Police Department during a police-sponsored Halal cookout.

Officers in the 615-member St. Paul Police Department host swimming classes for Somali girls at a YWCA and play soccer with Somali teenagers and young adults. One Minneapolis Police Officer, Abdiwahab Ali, said his department bought a 14-year-old boy a new bike after his mother told police that Islamic militants were trying to convert her son at a mosque on the other side of town.

“When you see a kid changing behavior, making friends that he is hiding, you suspect that something is wrong,” said Minneapolis Police Officer Abdiwahab Ali, one of five Somalis on a force of 820 police officers. Ali patrols Ceder-Riverside, a neighborhood with the city’s largest Somali population.

Ali purchased the bike at a local store, through the police department’s Bike Cops For Kids program. “While he was shopping, it gave him more opportunity to talk,” Ali said. “It was alarming. We just started talking to him and he changed his friends.”

According to Ali, at least one of those friends was charged in November for trying to fly overseas to join ISIS. The 14-year-old boy and his parents could not be reached for comment.

Somali leaders in the Minneapolis-St. Paul, however, are less enthusiastic about the police methods being used in their communities. Jaylani Hussein, the executive director of the Minnesota chapter of the Council on American-Islamic Relations, pressed residents to question whether their conversations with neighborhood beat officers would eventually end up in a FBI surveillance file. “Over-policing hurts us. People get paranoid,” Hussein said. “This issue requires more than a police officer who knows some code words.”

Imam Hassan Mohamud, who leads the Minnesota Da’wah Institute, a mosque and community center in St. Paul, also had “mixed feelings” about the local police. According to Mohamud, few trust that the police are only interested in hearing minor complaints. “We don’t want our kids to feel that they are stigmatized,” he said. But, Mohamud concedes, members of his mosque have grown more comfortable talking to officers about violence and low-level crimes in their neighborhoods.

Both police departments in Minneapolis and St. Paul stressed that their officers’ interest in Somali neighborhoods has nothing to do with intelligence-gathering. To them, it goes back to old-fashioned police work. Said Minneapolis Deputy Chief Kris Arneson, “The more that I think we engage in the community, the more the community will trust us and think we are fair.”