Where Law and Order Meets Paranoid and Schizophrenic

Doctors tell Ronald1 he is schizophrenic, but he doesn’t believe them. For the past few weeks, he’s been an inmate and patient on the 19th floor of Bellevue Hospital, where mentally ill prisoners, mostly from Rikers Island, are held in a ward called the forensic unit.

Ronald1Names have been changed and identifying information withheld to maintain the privacy of the patients.

Just down the hall from the forensic unit is a small courtroom, where Ronald appeared on a recent Tuesday in his light-blue hospital pajamas and slippers, his hands and feet cuffed. This is not the court where Ronald will be tried for the felony he’s facing, if indeed he ever gets to trial. The issue here — the only issue in Room 19E2 — is whether the mentally ill can be treated against their will. Ronald was refusing to take medication, so Bellevue applied to the court to administer antipsychotic drugs over his objection. “I used to have a mental illness in the past, but not anymore,” Ronald insisted to Judge Arthur Engoron, who was tasked with deciding between the patient and the hospital. 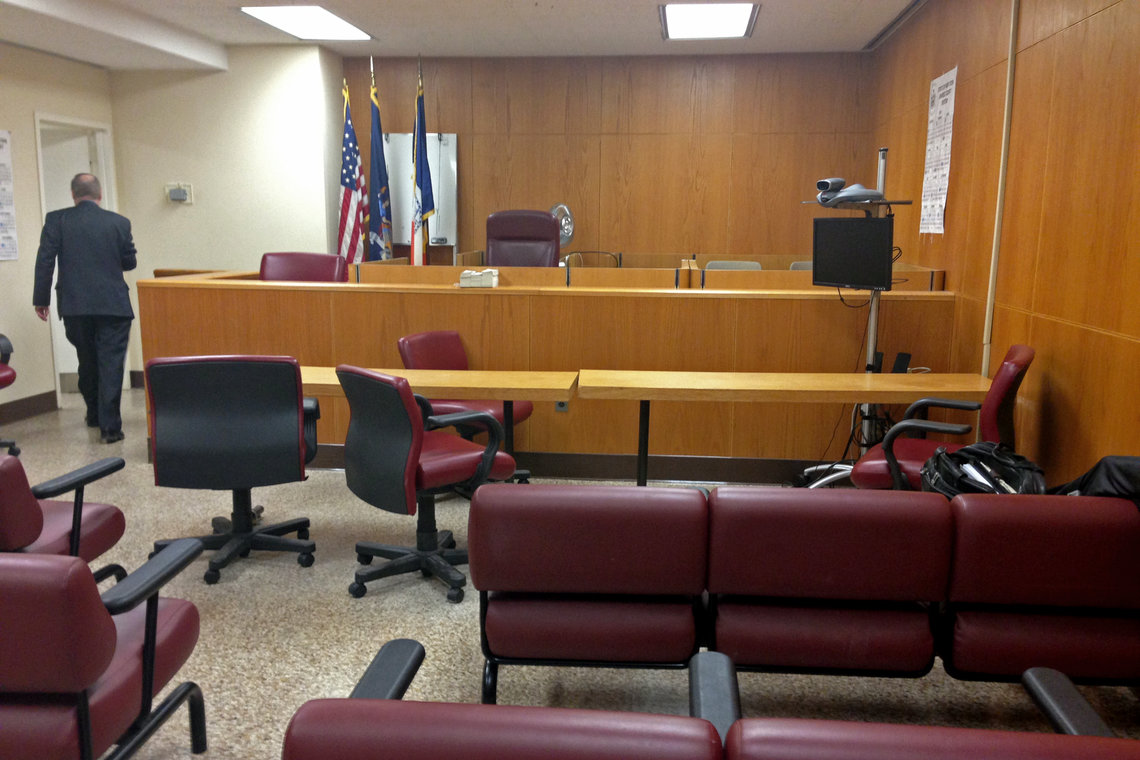 After a day of proceedings, which began at 10 a.m., the courtroom at Bellevue Hospital clears out at 2 p.m.

This courtroom, tucked away in a narrow hallway of Bellevue’s sprawling campus, is where the criminal justice system meets state-sponsored psychiatry, and jurisprudence meets the theater of the absurd. Sometimes patients appear to be in the middle of psychotic episodes. Often they vigorously shake their heads throughout the testimony of the doctors. Bellevue hospital is represented by a pair of identical twins in their 70s who work alternate months. The assigned judges sometimes seem exasperated. Court officers regularly sleep through the clamor.

Only some of the patients who appear in this court face criminal charges. Others have been committed to Bellevue, one of the largest public hospitals in the country, because they are deemed a danger to themselves, the public, or both. Those who parade before this court are overwhelmingly the city’s poor and vulnerable. Many, when they are not in residence at Bellevue or Rikers, are homeless.

Court meets from about 10 a.m. to 2 p.m. on Tuesdays and every other Friday, with no lunch break. Cases involving patients from Beth Israel Medical Center are also heard. There is never enough time. On the three days this reporter observed court in Bellevue, each assigned judge began the session by picking up the calendar and wondering aloud how he was going to make it through that day’s docket.

Ronald’s case was one of five to make it to a hearing the day he appeared in court, out of 21 that were scheduled. Ronald has been in and out of psychiatric hospitals his whole life, he explained through the court’s Spanish interpreter; but he’s fine now, he said, and works as a taxi driver. Dr. Greg Davis, an attending physician, had a different view. “He’s dangerous,” said Davis, describing Ronald as paranoid and disorganized. He had recently threatened to burn the hospital down. Medication would improve those symptoms, said Davis, and would help him comprehend “what’s happening in terms of his incarceration.” Judge Engoron ultimately sided with the hospital.

Hearings usually begin with one of the identical twin brothers, Raymond and David Baltch, who represent the hospital. (Both spend their off months as traffic attorneys in Long Island; they live around the corner from each other.) They are, of course, frequently mistaken for each other. “It’s one guy collecting two checks,” said David, reciting what seems to be an oft-repeated joke.

The patients are assigned attorneys from Mental Hygiene Legal Services, the state agency that represents people in psychiatric hospitals. Even in the most difficult cases, where a lack of treatment could have deadly consequences, MHLS attorneys are there to argue for the patient’s wishes. Gathering what someone in the grips of mental illness wants can be difficult, says Valentina Morales, the attorney-in-charge for the MHLS field offices at Metropolitan and Bellevue Hospitals, but patients often don’t have any other voice. “A lot of people don’t know these courts exist,” Morales said, adding, “A lot of people would like to believe these people don’t exist.” 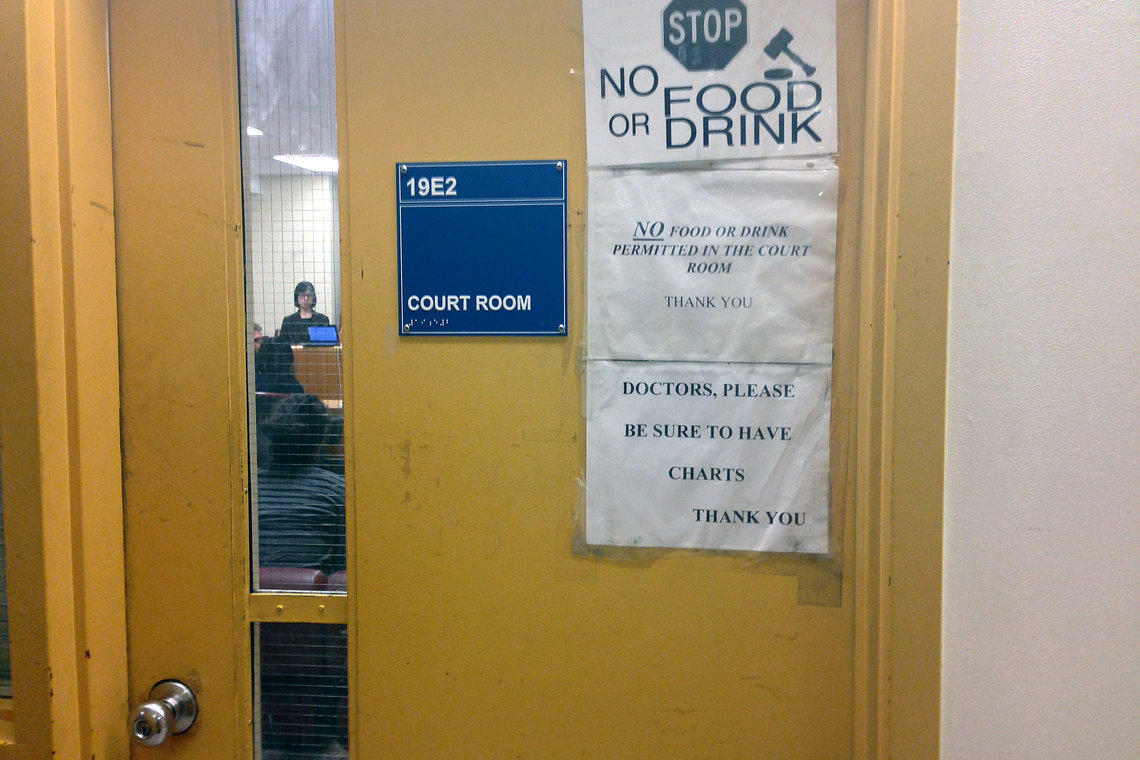 The view from outside the courtroom.

State Supreme Court judges are assigned to this court on a rotation. For some, like Judge Engoron, it’s an interesting detour from the more sober routine of civil courts. “There were a lot of close calls today,” said Engoron when court concluded on the day of Ronald’s appearance. The day had opened with the case of a teenager who was selectively mute, anorexic, and has been held in the hospital since she attempted suicide a year ago by jumping from a fourth-floor balcony inside Bellevue. Engoron decided the hospital could continue to commit her, but could not force her to undergo electroconvulsive therapy. The day closed with a mentally ill homeless man who didn’t want surgery on his frostbitten toes, despite the risk of infection, because he preferred to wait until they “fall off on their own.” Engoron ruled that the hospital could remove his toes over his objection.

For observers with little experience of the mentally ill, the court offers a rare glimpse of the confusion, delusion, and grandiosity that are increasingly common in the nation’s jails as they become de facto mental institutions. “I’m a genius,” one patient announced to the court. “I have 12 Nobel Peace Prizes. I’ve been selected as a U.S. Representative.” Another remarked that he, at 33 years old, was “Jesus’s age when he died.” The courtroom regulars look down at their laps. “You don’t mean to laugh at anybody,” said Judge Matthew Demic, who has presided over mental hygiene cases in a comparable court in Brooklyn. “But some of the things they come out with are so bizarre, you just shake your head.”

On one recent Tuesday, a doctor explained that her patient believed the U.S. government and Russian mafia were after him. “What she calls delusions are things that are actually happening,” interjected the patient.

Doctors here have the task of juggling two opposing responsibilities: to nurture a trusting, therapeutic relationship with a patient and to press for necessary treatment, even if that means facing off against the patient in an adversarial court hearing.

And judges also navigate a blurry line. Mental illness is not enough to hold a patient against his will. The hospital has to prove the patient poses a danger with “clear and convincing evidence.” The same standard goes for forcing medication; the hospital must prove the patient lacks the capacity to make a reasoned decision.

Sometimes the judge rules against the hospital, citing a failure to meet these legal burdens. Of the 25 cases resolved during this reporter’s visit, five went against the hospital. In one, a patient claimed he planned to cure himself with vitamins and would not take any prescription antipsychotics for fear of the side effects. The doctor argued he was paranoid, delusional, fast-talking, and agitated. The judge sided with patient. As the patient’s attorney, Kent Mackzum put it, “If we medicate everyone over objection who is loud, irritable and speaks rapidly, then you’re medicating a lot of the people in New York City.”