‘There is a Visceral Hatred for the People Who Wear This Uniform.’

On April 19, 25-year-old Freddie Gray died of a spinal injury he suffered while in the custody of Baltimore police. Protesters have since held numerous demonstrations, the latest uproar in a string of deaths of young black men after interactions with law enforcement. The Department of Justice announced Tuesday they would conduct their own investigation into Gray’s death.

Since becoming Baltimore’s police chief in 2012, Anthony Batts has been vocal about the need to rebuild the relationship between cops and communities of color. “Leadership should be focused not just on crime-fighting, but tackling racism," he told a national police task force in February. In multiple public appearances, he has criticized mass incarceration and promised to eradicate police brutality from a department accused of too often using a heavy hand. 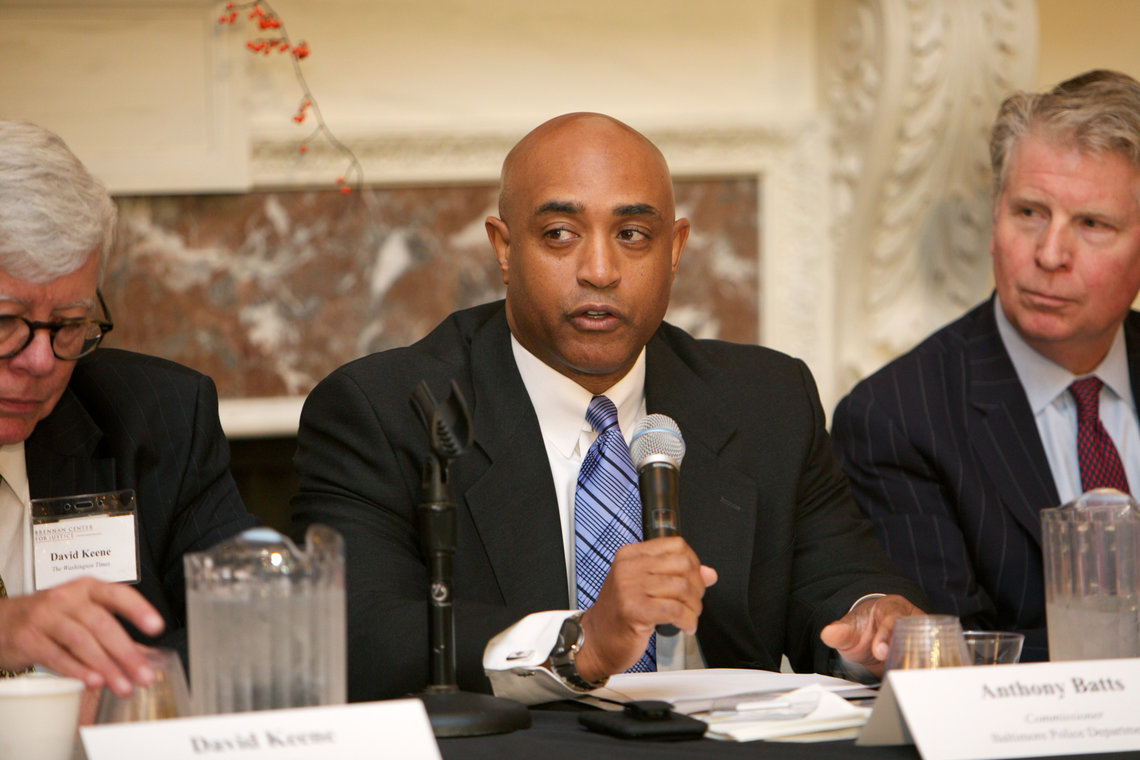 Sam Hollenshead/NYU Photo Bureau for the Brennan Center for Justice

In response to Gray’s death, Batts urged caution and said there are still too many unknowns about what happened during the arrest. Batts spoke on a panel hosted by the Brennan Center in September about how police can better serve minority communities. For context on the latest police department under federal scrutiny, here are some of the highlights:

On where he came from: “I grew up in south central Los Angeles, very poor kid…. Gangs like the Crips and the Bloods and Black Guerrilla Family started in the neighborhoods where I grew up…. I asked my mother at that young age of 8 years old, did anybody give a damn whether I lived or died? Did anybody care if I survived as a little black kid growing up in south central Los Angeles, and did anybody understand my hopes, my dreams, my aspirations?”

On mass incarceration: “Our job is not just enforcement; our job is the prevention of harm. Harm comes in a lot of different forms. If you focus on just enforcement, your only tool for addressing a problem is arresting people, mass incarceration. When you’re addressing the issue by prevention of harm, you’re dealing with a lot of different things, you don’t stay in your lane...you cross the line of recreation, you cross the line of economic development…. You have a responsibility, because in many of these areas, you are the only point of government that these residents ever get to see.

“When I was a street police officer in the 1980s, rock cocaine hit Southern California, and it hit it hard. We had African-American men, young men, dying left and right, every single day. Brutal shootings that were taking place, people like me killing ourselves off left and right. The community said, 'Do something about it.' They said, 'We don’t want to hear talk, we don’t want to hear rhetoric, do something about it….' So we did. We arrested everyone that we possibly can, because we knew that was the only thing that we could do at that time, because there was no empirical data out there for us to do anything differently…. That has crippled communities that I came from.”

On police in minority communities: “In many of my minority communities, there is a visceral hatred for the people who wear this uniform. A visceral hatred. And what I have to get my organization to address...is, we’ve earned that. And many times when we’ve gone out to try to help and make it better, we’ve exacerbated the problem…. We’re going in trying to do God’s work, trying to make it safer for the people that live there, and we arrest people.”

On protests: “Pointing a high powered weapon at citizens that are exercising their constitutional rights is off the charts. That’s crazy, that is wild to me. I would tell you most chiefs of police in the United States think the same way.... So as we use Ferguson as a bellwether, most police chiefs that I know of in major cities that are peers think that is so far out of the norm that it’s crazy. How I approach protests...is that we’re there to help them to protest. We’re there to help them do their constitutional rights of saying, 'This upsets me, this angers me....' As long as they do that, and they don’t tear up a city, that’s okay.”