A concurring opinion from the past

By Garrett Felber
Looking Back at the stories about, and excerpts from, the history of criminal justice.

“Welcome to Groundhog Day,” Justice Antonin Scalia wrote Monday in a caustic response to Justice Stephen Breyer’s dissent. In the Supreme Court’s 5-4 decision in Glossip v. Gross which reaffirmed states’ right to execute prisoners by lethal injection, Scalia bemoaned what he called a familiar scene in which petitioners “sentenced to die for crimes they committed” appeal to the cruel and unusual punishment clause of the Eighth Amendment. Not only is the scene familiar, so are many of the arguments. Large portions of Breyer’s dissent and Scalia’s response centered on the classical debate over the effectiveness of the death penalty as a deterrent. One long forgotten argument against deterrence theory and capital punishment is buried in the newspaper of the Norfolk Prison Colony (now called the Massachusetts Correctional Institute). The 1949 debate response was written by a 25-year-old prisoner named Malcolm Little, who had already adopted the surname: X. 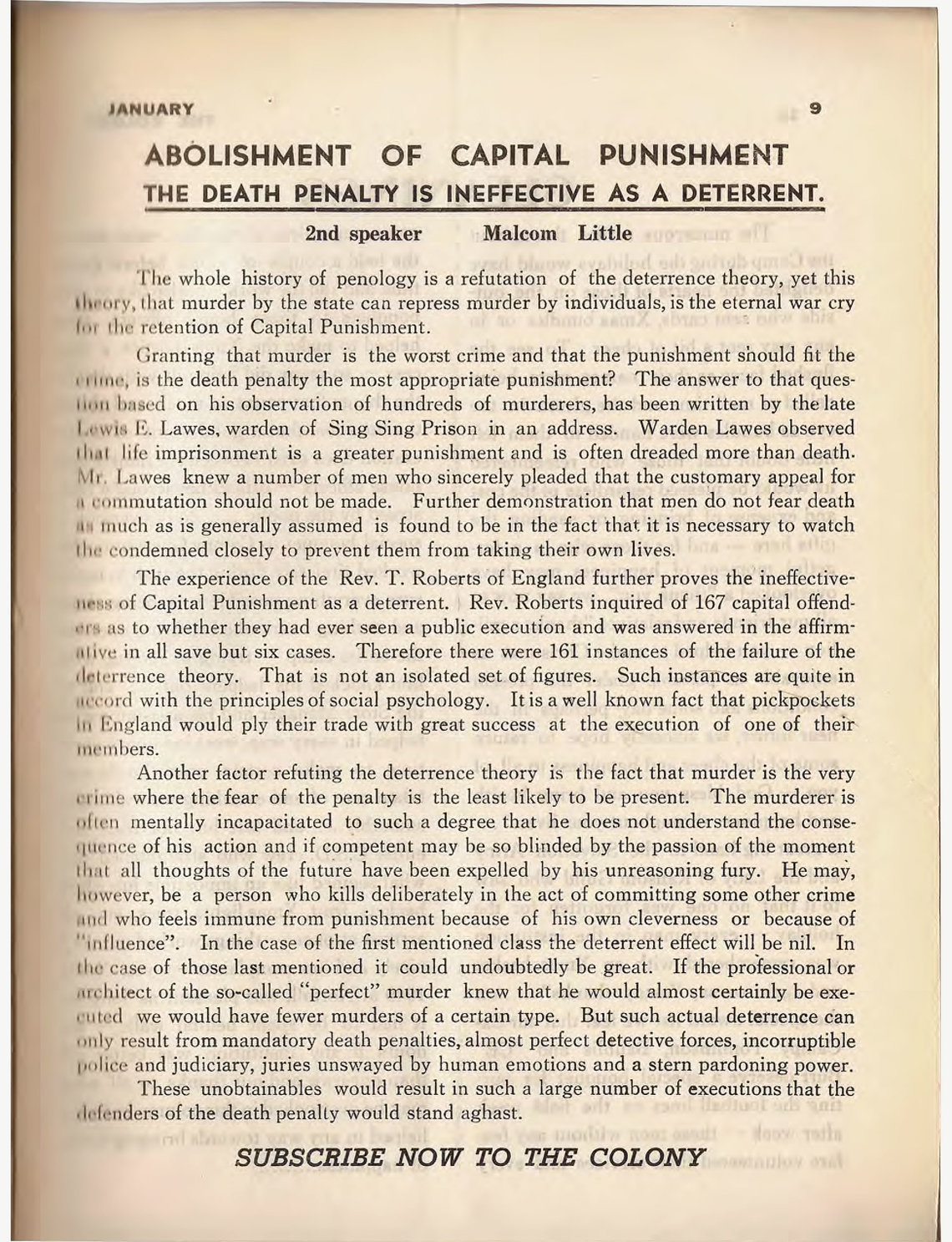 “The Abolishment of Capitol Punishment,” as it appeared in the January 1950 edition of the prison paper The Colony.

Norfolk was considered a model prison community, with buildings arranged like a college campus, a community center, dormitories around a quadrangle, and a well-stocked library. It harkened to an era of penal reform that focused on rehabilitation and education. Malcolm X, who was serving a sentence of 8-to-10 years for breaking and entering and larceny, outlined his reasons for requesting a transfer to the prison : “My sole purpose for wanting to go to Norfolk was the educational facilities that aren't in these other institutions . . . There are many things that I would like to learn that would be of use to me when I regain my freedom.” One of the opportunities that he took advantage of at Norfolk was its debate team, which frequently debated – and defeated – teams from the Ivy League, from the 1930s to the 1970s.

The debates took place several times a month, and were typically held at the prison’s assembly hall with music provided by the Colony’s orchestra. Teams were judged by a three-person rotating panel of academics, lawyers, and other professionals. Audiences sometimes swelled with hundreds of spectators and prisoners.

Malcolm X was the second speaker in the debate on “The Abolishment of Capital Punishment.” “The whole history of penology is a refutation of deterrence theory,” he began, “yet this theory, that murder by the state can repress murder by individuals, is the eternal war cry for the retention of Capital Punishment.” Using the resources available at Norfolk’s library, Malcolm cited a study in which 167 capital offenders were asked if they had witnessed an execution before. All but 6 had. “Therefore there were 161 instances of the failure of the deterrence theory.” He also posed two hypothetical types of criminals, one who was unable to understand the consequences of his actions and another who believed he was immune to punishment. While the former was clearly not likely to be shaken by the possibility of the death penalty, Malcolm argued that the latter would only be dissuaded by “mandatory death penalties, almost perfect detective forces, incorruptible police and judiciary, juries unswayed by human emotions and a stern pardoning power.”

Malcolm X’s final point gestures to the arguments made by Justice Breyer in his dissent about the arbitrary and discriminatory nature of death sentence convictions. Breyer cites several studies documenting race, gender, and geography as crucial factors in capital sentencing. Malcolm X did not make an explicit argument about race, but statistics since 1976 bear out the role that it has played in the death penalty. Although African Americans represent 12 percent of the population, nearly 35 percent of those executed since the reinstatement of capital punishment in Gregg v. Georgia have been black. A 2003 study in Maryland found its death row population to be 67 percent black despite a statewide population of only 28 percent. In every single capital case the victims were white. (Maryland did away with capital punishment last January.) What Malcolm X pointed out in 1949, was that deterrence theory relied on a flawless justice system, which simply did not – and does not – exist.

While the Supreme Court’s decision in Glossip v. Gross again put the burden back on the shoulders of death row prisoners, asking that they provide more “humane” alternatives to the lethal injections substances such as midazolam, Justice Breyer’s dissent opened a larger debate about the constitutionality of capital punishment under the Eighth Amendment. Malcolm X’s critique of capital punishment penned as a young inmate long before he became an international advocate for racial justice, reminds us of the rich history of death penalty abolitionism. And the circumstances of the debate should recall something else we have forsaken, if not forgotten: the possibilities of a penal system that emphasizes reform and education over punishment and retribution.

Garrett Felber is a PhD student at the University of Michigan finishing a dissertation on the Nation of Islam. He is the co-author of The Portable Malcolm X Reader (Penguin, 2013).