What Harper Lee Got Right

“Go Set a Watchman” puts the “white savior” notion in its place.

There’s a moment about halfway into Harper Lee’s "Go Set a Watchman" when Jean Louise Finch discovers among the papers of her father, Atticus Finch, a racist pamphlet with a drawing of an “anthropophagous Negro” on the cover, below the title, “The Black Plague.” Holding it like a “dead rat by the tail,” she deposits the pamphlet in the kitchen’s garbage can. In that moment, she discards, too, the literary trope of Atticus Finch as white savior. But Jean Louise’s evening is about to get much worse.

As the sun begins to set, she climbs to the Jim Crow balcony of the Maycomb County, Alabama courtroom, where she and her brother Jem, years before, had watched their father defend an innocent black man in a rape case. Only this time, 26-year-old Jean Louise witnesses a meeting of the Maycomb County Citizens’ Council — filled with “ignorant, fear-ridden, red-faced, boorish, law-abiding, one hundred percent red-blooded Anglo Saxons.” And there, among Maycomb County’s “trash,” sits Atticus Finch. He’s on the council’s board of directors, and alongside her father is Henry Clinton, the young law student who’s been courting her (Atticus has taken him under his wing). Jean Louise soon learns that Henry is one of the council’s “staunchest members.”

Surely, Jean Louise hopes, it’s all a mistake. The two men are merely “pulling something,” in attendance only “to keep an eye on things.” What follows is a rude awakening for the doting daughter still known around Maycomb as “Scout.” She watches as another member, Grady O’Hanlon, “there to uphold the Southern Way of Life,” rises to speak. Sick and trembling, Jean Louise listens as O’Hanlon denigrates blacks with an assortment of vulgarities and references to their sub-human characteristics, insisting that “no niggers and no Supreme Court was going to tell him or anybody else what to do…”

At the heart of "Go Set a Watchman" is the obvious but unnamed landmark 1954 Supreme Court decision, Brown v. Board of Education, that ultimately resulted in the desegregation of public schools. The elephants in the room in this book are Thurgood Marshall and his fellow NAACP lawyers who brought the segregation case before the highest court in the United States.

Later in the story, Jean Louise confronts Atticus on his views, and father and daughter have it out on the topic of race in the pre-civil rights era. 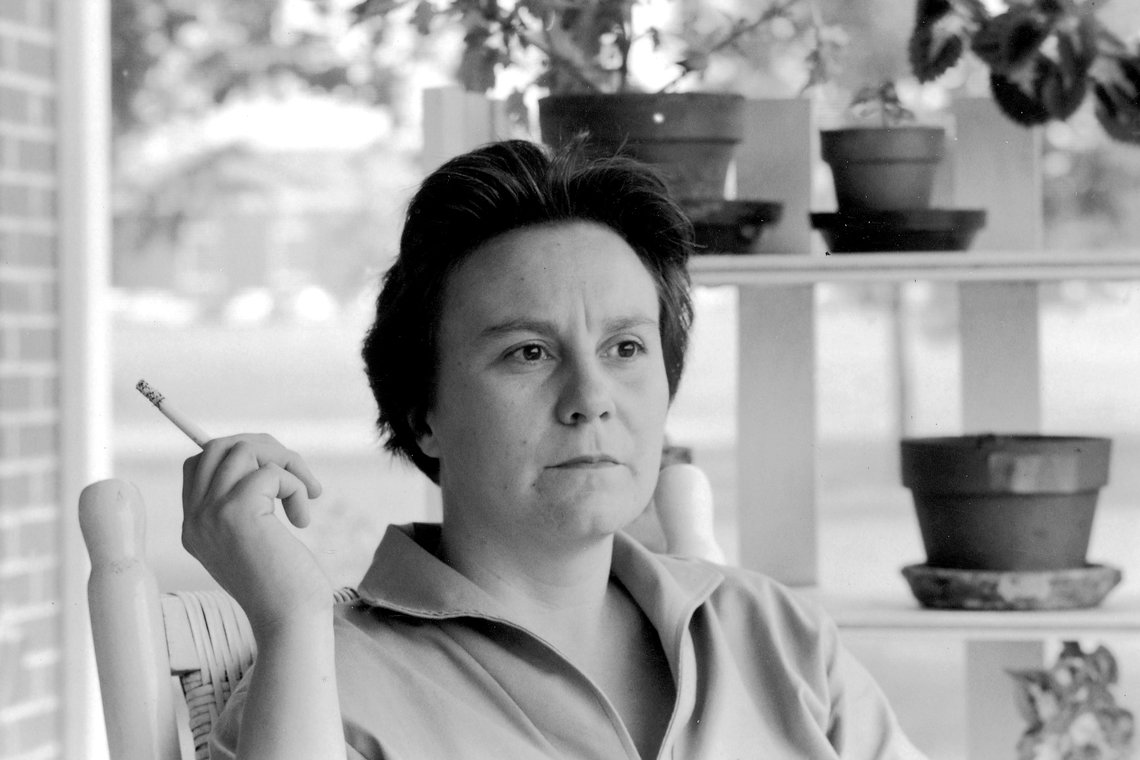 Harper Lee on the porch at her parent's home in Monroeville, Ala. in 1961.

Perhaps even more sad than his views on race in this book (which should be no shock to anyone aware of the South’s reaction to the Brown decision), the great white savior Atticus Finch is ultimately exposed as a rube lawyer — exactly the kind Marshall took special delight in destroying in the higher courts. Finch complains about NAACP lawyers who wait around for “some felony committed by a Negro against a white person.” In truth, there were so many instances of blacks being falsely accused of felonies against whites and such limited resources at the NAACP that the organization selected only the strongest cases to defend.

Finch goes on to explain to his daughter that the NAACP lawyers in these cases “raise every legal trick in their books.” Two such “tricks,” Finch describes, are that the NAACP attorneys “demand Negroes on the juries,” and try to “force the judge into error” so that they can appeal to federal courts where the “cards are stacked in their favor.”

Imagine that. The NAACP lawyers had the nerve, according to Atticus Finch, to practice law in adherence to the U.S. Constitution. Pay no attention to the biased judges, the rampant prosecutorial misconduct, the incessant perjury by law enforcement officials, and the all-white juries that effectively stacked the cards against blacks at every level of the criminal justice system in the Jim Crow South. The real victims in these cases, according to Finch, are the white southern judges who suffered the rare misfortune of having their rulings scrutinized by the U.S. Supreme Court — the last resort, and the only level playing field the NAACP had at its disposal. Thurgood Marshall and his lawyers therefore had the temerity to employ “tricks” such as constitutionally protected due process and equal protection rights to save the lives of their clients.

In one such case, Shepherd v. Florida, the 1951 death-penalty case that is the subject of my book, "Devil in the Grove," Marshall appeals the guilty verdicts of two young black men convicted for raping a white woman and sentenced to die in the electric chair. The case reached the U.S. Supreme Court, prompting Justice Robert Jackson to write, in the court’s per curium decision to overturn the Lake County, Florida verdict, that the convictions “do not meet any civilized conception of due process of law,” adding, “the case presents one of the best examples of one of the worst menaces to American justice.”

Jackson also addresses another important aspect of race in the Shepherd case, writing, “The only chance these Negroes had of acquittal would have been in the courage and decency of some sturdy and forthright white person of sufficient standing to face and live down the odium among his white neighbors that such a vote, if required, would have brought.”

In essence, Jackson recognizes that the scales of justice are tipped so heavily against blacks that even the first-rate legal counsel of Thurgood Marshall and his associates from the Legal Defense and Educational Fund would not be enough to overcome the entrenched system of white supremacy in the courtrooms of the American South.

Later on in "Go Set a Watchman," Henry Clinton tries to justify his membership in the Maycomb County Citizens’ Council to Jean Louise. “Have you ever considered that men, especially men, must conform to certain demands of the community they live in simply so they can be of service to it?” Jean Louise remains unmoved, and Henry grabs her by the shoulders. “I’ve got to live here, Jean Louise. Don’t you understand that?”

Heartbroken, the daughter of Atticus Finch sees that the man who wants to marry her will never be that “sturdy and forthright white person” Justice Jackson describes — the man her father once seemed to be.

“How can you live with yourself?” Jean Louise asks Henry, to which he replies, “It’s comparatively easy. Sometimes I just don’t vote my convictions, that’s all.”

The scene is reminiscent of another young Alabama lawyer, Hugo Lafayette Black, who joined the Ku Klux Klan in the early 1920s under the assumption that it would help him get elected to the Senate, which it did in 1926. A decade later, when Franklin Delano Roosevelt appointed him to the U.S. Supreme Court, Black was forced to acknowledge his past and denounce the klan in an unprecedented 1937 radio address to the nation. He was friendly with both Jews and Catholics, he asserted, and he counted among his friends “many members of the colored race.” Black had resigned from the white-supremacy group before ever using his klan card, he assured the American public, and, after effectively putting the matter to bed, he would go on to serve as an Associate Justice of the Supreme Court for another 34 years.

In "Go Set a Watchman," Jean Louise has a lengthy discussion with her father, who rails against the Brown decision and asks if she’s ready to have blacks (who are, he says, “still in their childhood as a people”) in “our world.” The NAACP, Finch claims, “is trying to wreck us,” and the Council, he insists, “is our only defense.”

It’s important to remember that Atticus Finch is a fictional character created by Harper Lee, and that "Go Set a Watchman" is believed to be an early draft version of "To Kill a Mockingbird" that Lee chose not to publish for more than 50 years. The Atticus Finch of “Watchman” is certainly more ambiguous and complex than the lawyer in “Mockingbird,” and Lee’s editorial choices as writer (along with the guidance and suggestions of her editor) do not merit the kind of intense character scrutiny owed to, say, William H. Rehnquist. In 1952, while a clerk for Associate Justice Robert Jackson when the court was considering Brown v. Board of Education, Rehnquist wrote in a memo that the court’s 1896 “separate but equal” ruling in Plessy v. Ferguson “was right and should be affirmed.” Later, Rehnquist’s state of mind as Chief Justice of the Supreme Court, unlike the state of mind of the fictitious Atticus Finch, had real legal and social consequences in America.

In "Go Set a Watchman," Harper Lee seems to be on the verge of recognizing the contributions not of white saviors like the Atticus Finch of "To Kill a Mockingbird," but of men like Thurgood Marshall, who often picked up where the Atticus Finches of America failed in court, saving the lives of innocent men. Jean Louise opines to her father that the South should have tried to work with blacks instead of running from the Brown decision and ultimately resenting the government. “I think we deserve everything we’ve gotten from the NAACP and more,” she tells him.

Or perhaps, had Harper Lee continued to write, Atticus Finch might have had an awakening in later years, as Justice Hugo Black did when he went on to become one of the staunchest supporters of civil liberties on the Supreme Court. The former klan member listened to Thurgood Marshall’s argument in Chambers v. Florida, the landmark ruling in 1940 that involuntary confessions are inadmissible in court. Black was moved to write the unanimous opinion, and his own closing lines often left him “wiping away tears” whenever he read them aloud:

Under our constitutional system, courts stand against any winds that blow as havens of refuge for those who might otherwise suffer because they are helpless, weak, outnumbered, or because they are non-conforming victims of prejudice and public excitement. Due process of law, preserved for all by our Constitution, commands that no such practice as that disclosed by this record shall send any accused to his death. No higher duty, no more solemn responsibility, rests upon this Court, than that of translating into living law and maintaining this constitutional shield deliberately planned and inscribed for the benefit of every human being subject to our Constitution-of whatever race, creed or persuasion.

Living, breathing men like Hugo Black and Robert Jackson recognized that Thurgood Marshall and other civil rights lawyers and advocates were risking their lives in pursuit of constitutional equality. They also recognized that as justices on the nation’s highest court, there was no higher duty than to identify and act on the injustices that came before them.

In the heat of the Brown battle, a fatigued Marshall once remarked to an associate, “sometimes I get awfully tired of trying to save the white man’s soul.”

The battle was so daunting, Marshall needed all the white saviors he could find.

Gilbert King is the Pulitzer Prize-winning author of "Devil in the Grove: Thurgood Marshall, the Groveland Boys and the Dawn of a New America.”