How other states dealt with their death rows after killing capital punishment.

The Connecticut Supreme Court ruled Thursday that the state’s remaining 11 death row inmates will have their sentences commuted to life without parole. The state repealed the death penalty in 2012, but the ban applied only to future sentences.

Writing for the majority, Associate Justice Richard Palmer said that any execution at this point "would violate the state constitutional prohibition against cruel and unusual punishment.”

New Mexico is the only remaining state where the death penalty is banned but inmates still face execution.

Nebraska Gov. Pete Ricketts vetoed a bill on Tuesday that would abolish the state’s death penalty. A bipartisan group of lawmakers overrode this veto on Wednesday, making Nebraska the first conservative state to outlaw capital punishment in more than 40 years.

Nebraska’s Department of Corrections is now tasked with deciding what to do with its 10 death row inmates and the obsolete instruments of execution — the death row unit and the execution chamber itself. Since the Supreme Court reinstated capital punishment in 1976, Nebraska has executed three people, the last one in 1997. 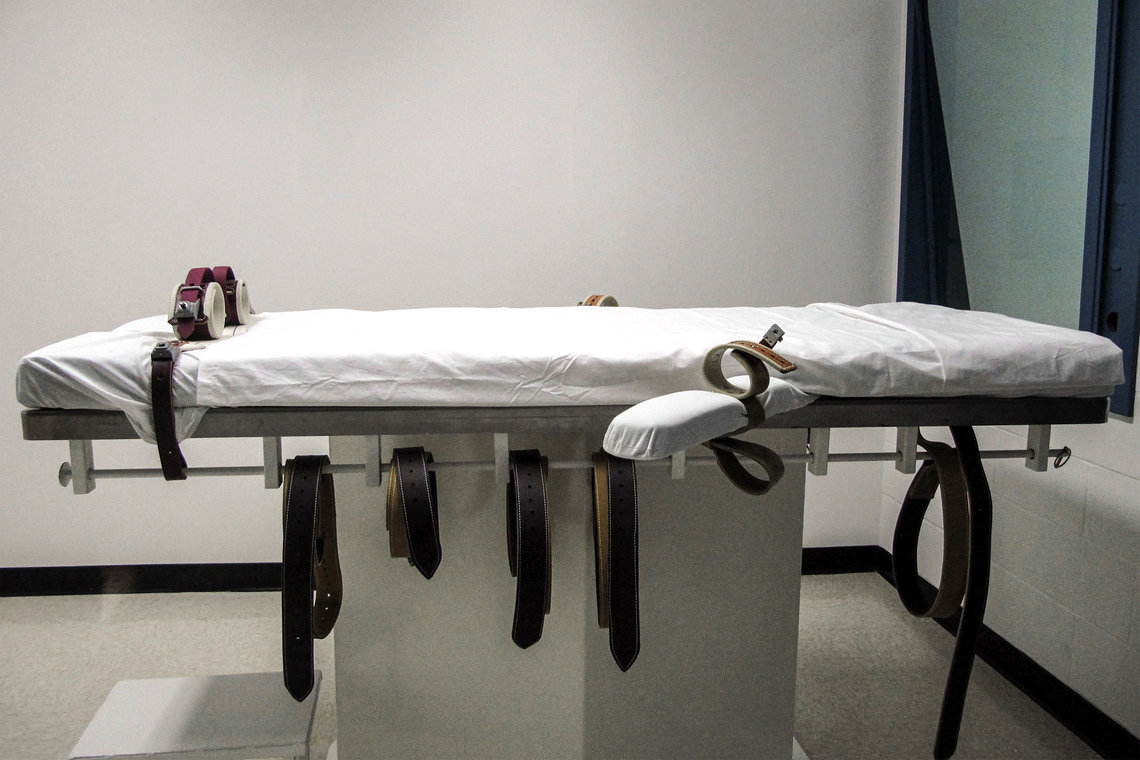 Nebraska’s lethal injection chamber at the State Penitentiary in Lincoln.

In the last decade, six states have abolished the death penalty, each carrying out the repeals differently. In some states, those already condemned continued to face execution; other states abandoned their death row units altogether. Here, a closer look at how those six states have adapted and the challenges Nebraska might face.

Number of people on death row at the time of repeal: 5

“Nothing has changed for them,” said Gerard Shields, a spokesman for the Maryland Department of Public Safety and Correctional Services. They remain at North Branch Correctional Institution, a maximum-security prison, although they aren’t restricted to solitary confinement. The death row cells now house general population inmates.

Maryland’s executions used to be carried out more than 100 miles away at the Metropolitan Transition Center. Shields said that a viewing room and gurney, among other vestiges, haven’t been touched in more than a decade since the state’s last execution in 2005.

Number of people on death row at the time of repeal: 11

Like Maryland, Connecticut abolished the death penalty prospectively. But unlike Maryland, the governor didn’t commute the sentences of those inmates at the time of the repeal, leaving 11 death row inmates in limbo. One person has since been removed from death row, pending a sentencing retrial. But one man has been added to death row since the repeal. In 2009, Richard Roszkowski was convicted of a triple murder committed in 2006. Because his crimes occurred before the state abolished capital punishment, he was eligible to be put to death. In 2014, a jury recommended him for execution, bringing the number of death row inmates in the state back up to 11.

The men continue to wait for executions that may never come. Karen Martucci of Connecticut’s Department of Corrections acknowledged that even if an execution were ordered, the agency currently has no supply of the three drugs necessary to carry out the executions. In a joint court case argued in the Connecticut Supreme Court, the 11 men have challenged the constitutionality of their executions post-repeal. They are currently awaiting a decision in that case.

Number of people on death row at the time of repeal: 15

Gov. Pat Quinn commuted the sentences of the 15 men to life without parole shortly before state lawmakers passed a prospective repeal law. At the time, Illinois had death row housing blocks in three different prisons. According to Nicole Wilson of the Department of Corrections, each prison has repurposed the cells to house different types of inmates. At one prison, the cells are used for inmates in administrative detention. At another, some of the cells house inmates with special mental health needs.

Illinois’s executions took place at Tamms Correctional Center (the last one was in 1999), but the prison closed two years after the repeal in 2013. The state has no other remaining execution facilities.

Wilson said in an email that the inmates “mostly were placed in general population” after resentencing, which gives them access to the commissary every two weeks and between eight and ten hours a week of recreation. Thirteen of the original 15 death row inmates are still alive. Nine are in maximum security facilities; four are at a medium-maximum prison.

Number of people on death row at the time of repeal: 2

Aside from Connecticut, New Mexico is the only other state to pass a strictly prospective repeal law. Two inmates remain on death row: Timothy Allen for raping and murdering a teenage girl in 1994, and Robert Ray Fry for murdering a woman in 2000.

Both are currently appealing their sentences, arguing that they should have been covered by the repeal legislation. Because of these pending legal challenges, there are currently no plans for executions, said Alex Tomlin, a spokesperson for the New Mexico Corrections Department.

Allen and Fry live inside the most secure section of the Penitentiary of New Mexico, a men’s maximum-security prison. Tomlin explained that the prison, with just two inmates facing capital punishment, no longer maintains a separate death row unit.

Number of people on death row at the time of repeal: 1

The New York Court of Appeals declared the death penalty statute unconstitutional in 2004. Three years later, another court reduced the only remaining death sentence in the state to life without parole.

That inmate is John Taylor, who was convicted of murdering five people at a Wendy’s in Queens. Since his resentencing, Taylor has completed the first stage of a transitional services program, allowing him to work as a tailor in a garment shop at Clinton Correctional Facility, a men’s maximum-security prison, according to Pat Bailey, a spokesman for the state’s Department of Corrections and Community Supervision. The death row was repurposed for general inmate housing.

Number of people on death row at the time of repeal: 8

As written, the legislation retroactively applied to the state’s eight death row inmates. Amid concerns that the bill went too far by leaving parole as an option for capital offenders, the governor commuted the sentences of the eight men to life without parole just before signing the bill.

Asked about the inmates’ transitional process after the resentencing, Department of Corrections spokesman Minhaj Hassan refused to “divulge the information due to security concerns.” Public records show that one of the eight men died in 2009, and the other seven are currently housed at New Jersey State Prison, a maximum-security facility in Trenton.

New Jersey’s last execution before the repeal was in 1963. Ralph Hudson was executed by electric chair for the murder of his estranged wife in an Atlantic City restaurant.

According to an agency spokesperson, Matt Schuman, “The room with the chair is now basically used as storage space.”