Confessions of a Grand Juror

Ten days in a room with 22 other jurors. What could possibly go wrong?

By Caroline Grueskin
Perspectives from those who work and live in the criminal justice system. Sign up to receive "Life Inside" emailed to you every week.

My chest was thumping as I sat in Manhattan Criminal Court. A part of me was eager to serve on a grand jury, to see our criminal justice system up close. But another part of me wanted to just go to work and avoid what might become a two-week-long distraction. A clerk called our names, and we were supposed to say “serve” or “application.” Serve sends your name into the bingo roller. Application means “application to defer.”

Most of you are going to serve, now or two months from now, he told us. Yes, you will be here for a full two weeks. No, it doesn’t matter if you are opposed to the criminal justice system. I said serve.

Two hours later, our grand jury warden walked us to a room with 23 seats, a table, and a podium. I picked a random chair. “Fifteen, 16, 17, 18…” she counted rapidly around the room and then issued a series of rapid-fire instructions: Where we were sitting would always be our seats. We couldn’t sit anywhere else. We couldn’t use our phones, except during breaks. If she caught us with a phone, she would take it away. (She did.) We could take notes, but nothing could leave the room.

“Adults!” she cried whenever we screwed up.

The purpose of a grand jury is to formally charge people accused of felonies — essentially, the job is to determine whether there is enough evidence to justify a trial. In 23 states, including New York, the grand jury process is required. “It uses its power both as a sword and a shield,” reads the handbook. “A sword to accuse or indict those whom there is reason to believe has committed crimes; a shield to protect the innocent against unfounded accusations.” 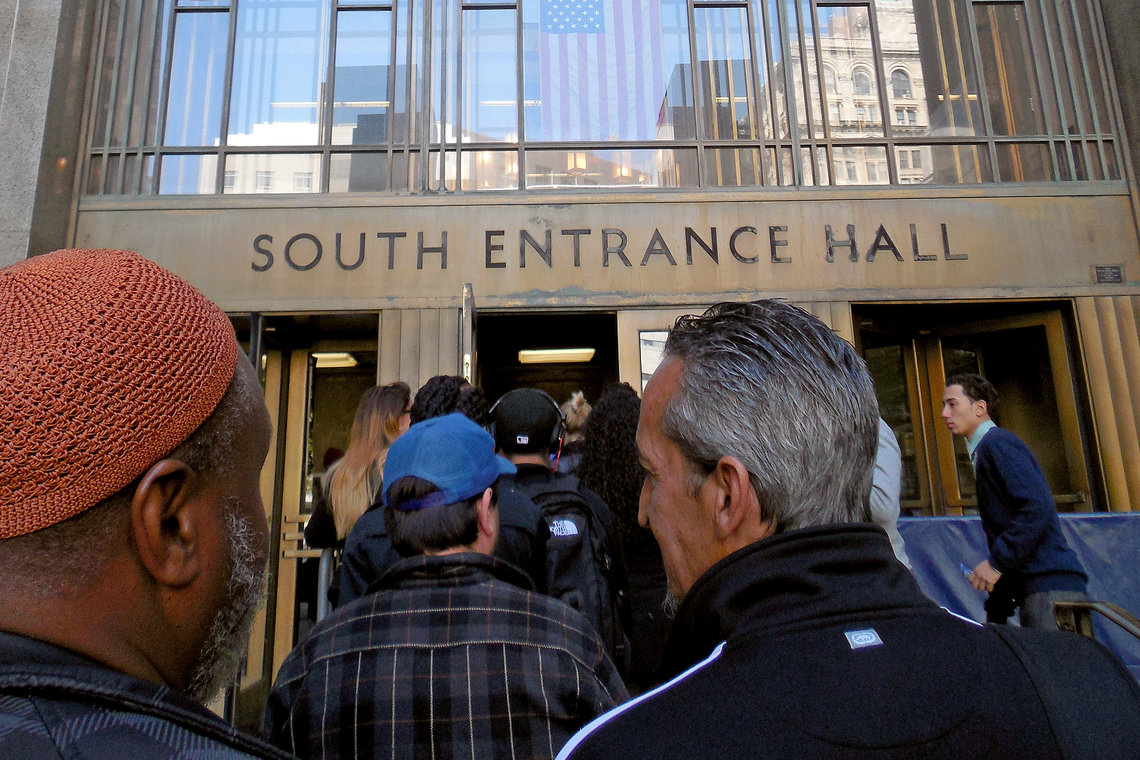 The entrance to New York County Criminal Court at 100 Centre Street in Manhattan.

In New York County, 23 people are chosen at random to serve for at least 10 days. As long as you’re a citizen, have not committed any felonies, and live in Manhattan, it’s basically no questions asked. Prosecutors come in one-by-one with their individual cases and lay out the evidence to the grand jury — usually in the form of witnesses, documents, and surveillance video — for anywhere from 15 minutes to several hours. We probably heard between five to seven prosecutors each day. Defendants have a right to testify, should they want to, but their lawyers can only advise them, not make arguments on their behalf.

Once the grand jury has heard all the evidence, a prosecutor reads the charges and their definitions out loud. A court reporter is tap-tap-tapping away. Then the grand jury is left alone to discuss the evidence and vote. If 12 of 23 people find that there is “legally sufficient evidence” and see “reasonable cause to believe” that a person did what they are accused of, the jury indicts. An indictment is not a judgment of guilt or innocence. But it clears the way for that question to be decided in a plea deal or trial.

I called my dad frazzled as I left that first day. You know there is a joke about grand juries, he told me. A grand jury will even indict a ham sandwich. When I came in the next day, several other jurors told me that someone had said the exact same thing to them. If grand juries have a reputation, this is it.

The reputation, to some extent, is justified: We indicted almost everyone. But it implies that a grand jury will believe anything a prosecutor tells them. That it will merely rubber stamp. And that, I found, was not right at all.

Prosecutors brought us a lot of evidence. We heard from police officers and victims, store managers and superintendents. Two people would often confirm the same series of events.

Maybe more importantly, we asked a lot of questions. Did the officer recover any other drugs from the defendant? Can the witness tell us why she waited to call the police? Are we allowed to consider the issue of entrapment?

One woman doubted everything. I have no idea how his fingerprints got on the cash register!

Another man hardly doubted anything. It is so obvious this guy did it. Can we vote already?

People made sharp points. “Okay, so my understanding of the case is that there is enough evidence to indict on the first charge, but I’m less sure about the second, because…” our unofficial discussion leader would open every voting session, before he called on us one by one to speak. “Don’t shush me,” I snapped at him one time, as he tried to quiet me and my neighbors.

We talked about mental illness and drug addiction, unreliable cops and race. We spent a long time on issues that were important to us but probably didn’t matter for the low standard of proof required for the indictment. I’m normally very stubborn. Here, I was routinely persuaded by my peers.

Still, I sometimes felt frustrated. "Why is this a felony?" I'd ask the other jurors. I knew what the consequences could potentially be of the indictment alone — Rikers, media attention, losing a job, a difficult plea bargain — and I sometimes didn’t want to indict cases that seemed less serious, even if I had “reasonable cause to believe.”

One time I cried. Another time I pleaded about our conflicting ethical obligations and the interests of justice. On our last day, I surprised myself when I yelled at a fellow juror who thought we should leave the question of mental illness for trial. The crime we were hearing about seemed to me unthinkable for a sane and rational person. “Who knows what kind of mental health treatment he’ll get at Rikers,” I barked. “Besides, you think there is going to be a trial?”

But asking my fellow jurors to consider the consequences was tough. Most of my peers saw themselves as fact-finders — interested in discussing the bigger questions and the mitigating circumstances, but only responsible for deciding if the evidence matched the crime. The consequences are a policy issue, some would tell me, not the issue we’re supposed to decide.

And yet, more than anything else, I came away from my stint at the courthouse with a real appreciation for grand juries. Most of these cases will not go to trial, but I suspect that a grand jury’s questioning and deliberations is an important check on the prosecution — making prosecutors more judicious in what they charge and more dedicated to uncovering evidence. The fact that we usually indicted, I realized, was not proof that we would have indicted anyone. Rather, it might have been evidence that one part of the system was working.