“There are two things cops don’t like – the way things are, and change.”

Philadelphia Police Commissioner Charles H. Ramsey’s nearly 50-year law-enforcement career will draw to a close when he retires on Thursday. Ramsey’s name should be familiar, even if you’ve only paid passing attention to the reform efforts that have swept through policing during the last few years.

In 2014, President Barack Obama selected Ramsey to co-chair the Task Force on 21st Century Policing, which urged police departments across the country to embrace greater transparency and address long-simmering tensions in minority communities. Ramsey separately invited the Department of Justice to audit the Philadelphia Police Department’s use of deadly force when the rate of police-involved shootings nearly doubled to 52 in 2012, at a time when both the number of assaults on police and overall violent crime was plummeting. 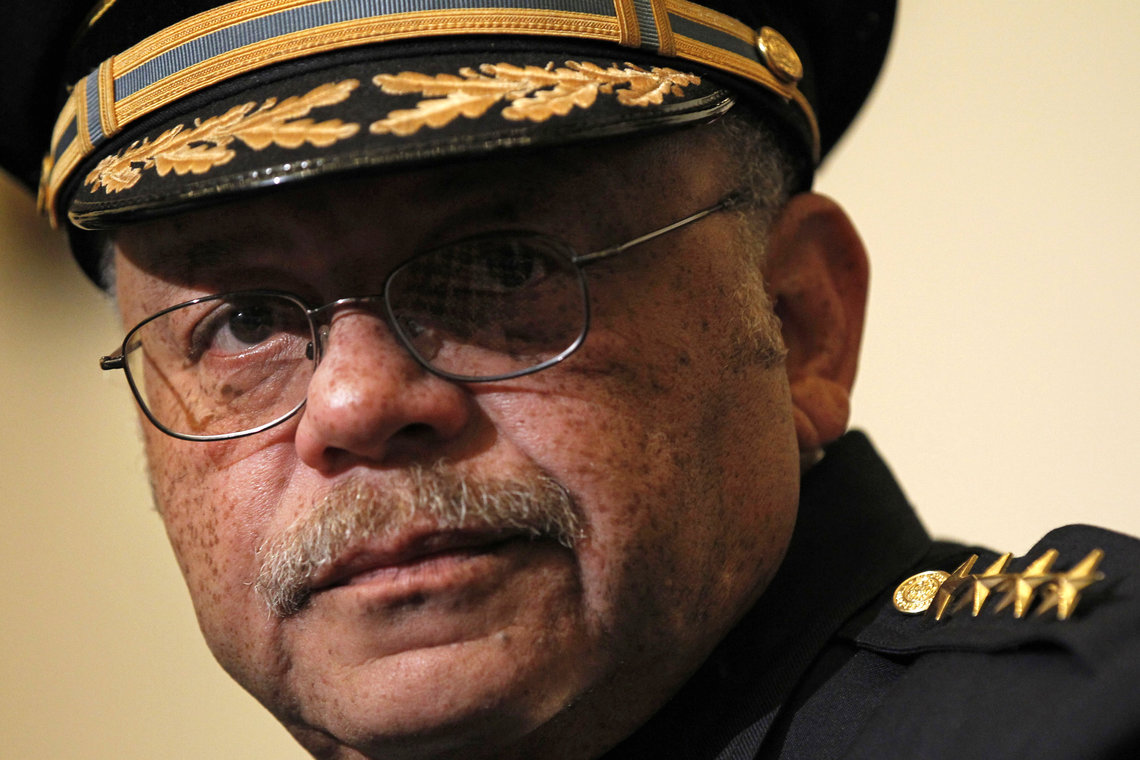 Police Commissioner Charles Ramsey at a news conference in 2011.

His name turned up in speculation about possible replacements for Chicago Police Superintendent Garry McCarthy, who was fired by Mayor Rahm Emanuel in early December over controversy surrounding the fatal police shooting of 17-year-old Laquan McDonald. Though Ramsey used to serve as Chicago’s deputy superintendent before leaving in 1998 to become the police chief in Washington D.C., he has said he’s not interested in returning to his hometown to claim the top job. Instead, he wants consult police departments across the country.

Ramsey recently spoke with The Marshall Project about lessons he learned during his long career, his thoughts on some of the issues facing police today, and the things he will — and won’t — miss about running a big-city department.

Politicians and citizens look to a police commissioner to do a lot, from driving down crime to improving the police department. How did you manage those expectations?

It’s kind of difficult. When I came to Philadelphia, there was all kinds of talk about lowering the crime rates. I remember telling people, the name’s Ramsey, not Moses. Don’t expect miracles.

But there are things you can do so people will sense there are some changes. We put a crime-fighting strategy together right away and put the plan online so people could understand our strategy and tactics. You can’t aim too low or too high. You set goals and keep yourself focused.

Strategies are all well and good, but you inevitably faced all-consuming police corruption scandals, like a 2014 federal indictment of six narcotics officers on racketeering charges, and a grand jury indictment last year of a homicide detective who allegedly interfered with an investigation that centered on his girlfriend as a murder suspect. How did you deal with those challenges?

You take it as it comes. Honestly, part of what I like about this job is that when you start your day, you don’t know what’s going to happen. That’s not to say I enjoy scandals, but what keeps you sharp is that it’s not routine. Where the difficulty comes in is that it’s very easy to become a firefighter, putting out one fire after the other. It’s hard to stay focused on your goals. That’s why I set up a unit here [to] create a vision of what we want the department to look like in the future, and start working backwards.

Protests over controversial police shootings have become routine in cities across the country during the last few years. Have police gotten better at managing demonstrations and interacting with protesters?

Things have changed. A few years ago, during Occupy Philly, one of the things we did at roll call was read the First Amendment to all of the officers, so they understood that people have a right to protest. We learned, looking at Ferguson, how unnecessary displays of force can have a negative effect on people. You want people to engage in First Amendment activities in a peaceful way, without us being the story.

How important is it for members of law enforcement to have some historical perspective when discussing the issues that activists and others are concerned about?

I grew up in a pretty tough area on the South Side of Chicago. But are you going to live in the past, or are you going to move forward to the future? At some point in time, you have to sit down and have a discussion and say, ‘OK, fine, these things may have happened, some of these things may not have been right, but where do we go from here? And how do we guard against history repeating itself in a negative way?’ That needs to be the focus, but I don’t hear enough of that kind of discussion.

The law enforcement world has evolved dramatically from a technological standpoint since you were a young cop. Do you view that as a good thing?

What we have now that we didn’t have then is video. If you want to use [the Laquan McDonald case as] an example, that’s just a bad shooting. It didn’t take long after watching the video to figure that out. But the problem was that it took a year for [the video] to come out, and that’s almost more controversial than the shooting itself. You know, bad news doesn’t improve with age. You just have to get it out there.

A lot of your time in Philadelphia has been spent fighting corruption and reforming the department’s policies and procedures. How do you get all of your officers on board?

You’ve got to be able to explain to people why you’re doing what you’re doing. I did a DVD recently explaining to our men and women why I revised the use-of-force-directive.

Most people understand. But there’s an old saying: there are two things cops don’t like – the way things are, and change.

At its core, is police work still basically the same as when you first joined Chicago’s police department?

The big controversy in Chicago when I started out was integrating police cars – having black and white officers riding together. They called them salt-and-pepper cars. We didn’t have women out in the field. All of the women either worked in the women’s detention center or they were youth officers. They didn’t come out into the field until the mid-1970s, and the [male] cops stopped fighting each other over the integrated cars because none of them wanted to work with women. We’re far more diverse today than we were, but still not as much as we need to be.

With all of the time you’ve spent in the policing, do you feel like you ever gained insight into what makes people tick, what makes some do horrible things?

I don’t want to get too deep into the understanding of what makes somebody snap, because if I could really understand it, maybe I would become part of the same problem. I want to deal with it, I want to resolve it, and I want to find the person responsible.

The D.C. snipers were the most stressful three weeks in my entire career. The random nature of it. There was no rhyme or reason as to why someone would go around and do something like that.

You instituted a policy in Philadelphia of identifying police officers within 72 hours of them being involved in a shooting. A state representative who is supported by the local Fraternal Order of Police introduced legislation that will conceal the names of those officers unless they’ve been indicted. How does that sit with you?

I feel very strongly that a police officer is a public servant. We wear uniforms with badge numbers and name tags that identify us, and we drive marked cars with numbers that can be traced. We don’t walk around with anonymity, but then when we shoot somebody, there’s an expectation that our names should not be released? I just don’t understand that logic.

What do you think you’ll miss most about being the police commissioner?

The people, the men and women, that make up law and enforcement.

What won’t you miss about the job?

I won’t miss some of the criticism that is going on right now. Some of it’s deserved, but a lot of it is not. People act as if we’re just out randomly shooting people for no apparent reason, and kind of lose sight of the fact that even though some shootings are unjustified, every time an officer has contact with someone that winds up resulting in the officer resorting to using their firearm doesn’t make it wrong. We have 260 murders in Philadelphia1, and 85 percent [involve] firearms. Who do you think goes after the people who committed those murders? We do.

This figure was correct at the time of the interview. By the end of 2015, the number rose to 280 murders

This interview has been condensed and edited for clarity.