Trump and the Mob

The budding mogul had a soft spot (but a short memory) for wiseguys.

By Tom Robbins
Looking Back at the stories about, and excerpts from, the history of criminal justice.

Donald Trump’s views on criminal justice remain one of those mysteries he will presumably carry with him, if elected, into the Oval Office, where he’ll sort it all out with the help of the nation’s best minds. We do know that he’s a “huge fan” of the police, and that he’d like to see them get more power. But he hasn’t suggested what kind of power, or how he’d do that. More jobs would solve the problem of mass incarceration, he told the Washington Post editorial board last month. And he’s been crystal clear on the death penalty, which he would make harsher by eliminating lethal injections since they’re “too comfortable.”

But one helpful lens for determining Trump’s views on crime and law enforcement is via his past encounters with those alleged to be on the wrong side of the law. That’s his history with the mob. And for all of his tough law and order rhetoric, the record shows the GOP frontrunner has been remarkably tolerant. In the course of his forty years of business deals, Trump has encountered a steady stream of mob-tainted offers that he apparently couldn’t refuse.

On the campaign trail, Trump has been coy about his past dealings with unsavory characters. But he couldn’t resist a Trump-style boast: "I've known some tough cookies over the years," he told Chris Matthews in February. "I've known the people that make the politicians you and I deal with every day look like little babies."

Actually, there’s an old FBI memo that puts a different spin on Trump’s attitude about the mob. It is a classic example of a young but already shrewd Trump hard at work. It was written in 1981 by a veteran Bureau agent, reflecting meetings that he and a fellow FBI official were having with the 35-year-old developer from Queens, then a rising star in New York's business firmament. The topic of the meetings was Trump's pending plunge into the Atlantic City casino industry. And while the memo was written in the stilted language of FBI-bureaucratese, Trump's wide-eyed comments were recorded with what seems like barely suppressed amusement. "Trump advised agents that he had read in the press and media and had heard from various acquaintances that Organized Crime elements were known to operate in Atlantic City," the memo states.

This was a little like saying he had heard that there had once been a man named Al Capone who failed to pay all of his taxes. But Trump, presumably shaping an argument he might need somewhere down the road, pressed on: "Trump advised that he wanted to build a casino in Atlantic City but he did not wish to tarnish his family's name inadvertently."

There were a few reasons why the FBI agents may have found this claim slightly disingenuous. 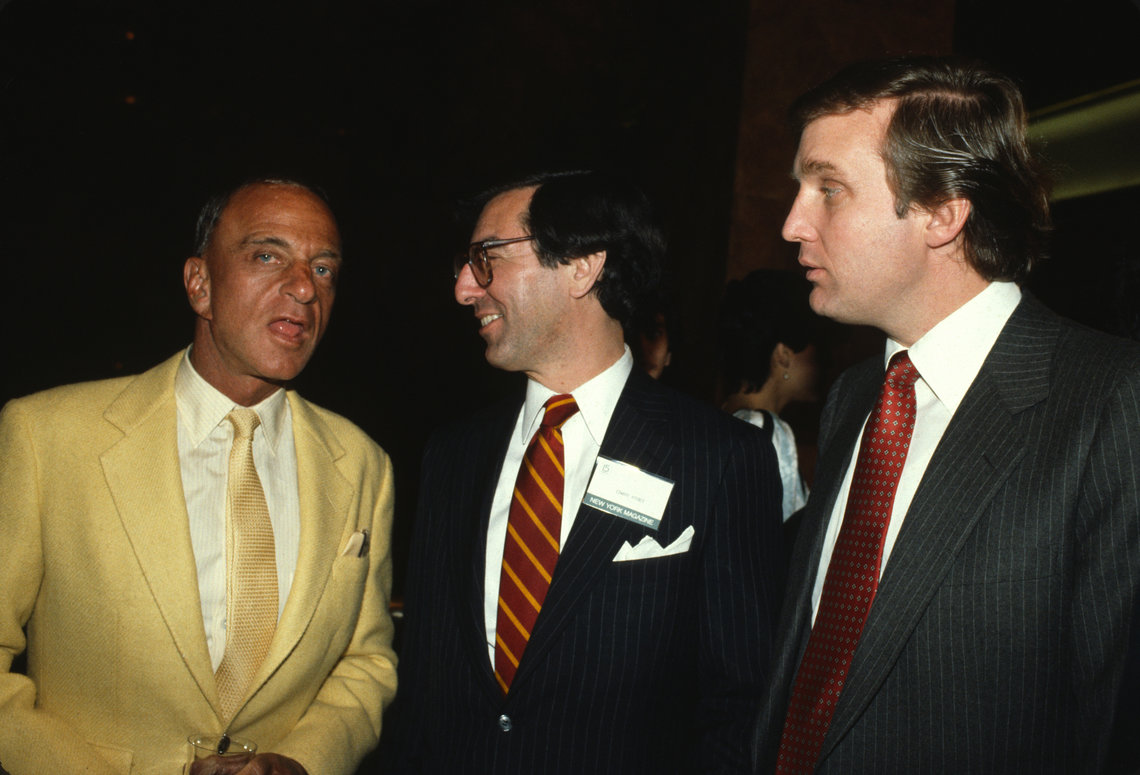 For starters, at the time Trump’s mentor on issues of politics and business was Roy Cohn, a lawyer whose other clients included a passel of mobsters, among them the bosses of the Genovese and Gambino crime families. Cohn, who served as Senator Joseph McCarthy's chief witch hunter before going into private practice, operated out of a townhouse on East 68th Street where clients Anthony "Fat Tony" Salerno and Paul "Big Paul" Castellano were regular visitors. Besides getting advice on their legal problems, as a former secretary later recalled to Wayne Barrett in his 1992 book, “Trump: The Deals and the Downfall,” the visits by the mob titans to their lawyer's office allowed them to talk shop without having to worry about FBI bugs. Cohn told a reporter that Trump called him “fifteen to twenty times a day, asking what’s the status of this, what’s the status of that,” according to Barrett’s book.

Another reason the FBI might not have taken Trump’s professed ignorance at face value was that Trump had already brushed up against his share of wiseguys in New York's gritty construction business, without apparent concern. To help build his first big Manhattan project, the Grand Hyatt New York on East 42nd Street, Trump had chosen a notorious demolition company secretly owned in part, according to the FBI, by a top Philadelphia mobster who doubled as crime lord of Atlantic City. To pour concrete for the new hotel, Trump picked a firm run by a man named Biff Halloran who was convicted a few years later for his role in what prosecutors dubbed a mob-run cartel that jacked up construction prices throughout the city. For the carpentry contract, Trump settled on a Genovese family-controlled enterprise that was central to another mob price-fixing racket, as found by a subsequent federal probe.

And then there was the person who had introduced Trump to the FBI agents in the first place. This was a 6-foot-5 bear of a man named Daniel Sullivan, a former Teamsters leader who was serving as what Trump called his "labor consultant" at the time. Sullivan wore other hats as well: He was partners with a reputed Atlantic City mobster named Kenneth Shapiro who controlled the local scrap market and who was in the process of selling Trump a large plot of land at top dollar on which to build his casino.

Sullivan, who had once been close to Jimmy Hoffa, was also secretly operating as an FBI informant, filling in the Bureau on the various mobsters who crossed his path. I know this because Sullivan, who died of a heart attack in 1993, told me all about it, proudly providing copies of the FBI memos as proof. And Sullivan wasn’t just bragging. The FBI agents confirmed to me both the authenticity of the documents and the meetings Sullivan had arranged for them with the budding casino kingpin.

I met the burly ex-Teamster in the late 1980s when I was working on a story for the New York Daily News about Trump’s use of yet another dubious contractor to demolish the old Bonwit Teller building to make way for the edifice that would serve as emblem of his empire. That was Trump Tower, the brassy condominium high rise on Fifth Avenue where he resides and from whose lobby he announced his presidential bid in June.

On paper, the demolition contractor was a union company, as were all of Trump's vendors at the time. But Local 95 of the demolition workers was essentially a subsidiary of the Genovese crime family, and few union rules were enforced. Most of the workers were undocumented immigrants from Poland and they were paid so little and so sporadically that many were forced sleep on the job site. A rank and file union dissident later sued Trump for failing to pay pension and medical benefits required under the union contract. Trump denied knowing about conditions at the work site. Sullivan, who by now had his own gripes with Trump, said otherwise. He testified in the civil suit that he had repeatedly warned the developer about the problems. Trump, in a rush to clear the site, had dismissed his concerns, he said.

Despite Trump's insistence that he never settles lawsuits, he wound up settling that one for an undisclosed sum. Whatever the amount, it seemed to make the union dissident and his attorneys quite satisfied.

In Trump’s defense, as a developer of major projects in New York, it was hard back then to avoid the mob. From the 1970s through the '90s, the Five Families had a chokehold on both major construction firms and most of the unions that represented workers on job sites. And no one has ever labeled Trump a mob associate, the FBI's term of art for those under the sway of organized crime.

But for someone who expressed such concern about possible entrapment by the Cosa Nostra in his Atlantic City casino ventures, Trump has willingly teamed up with a succession of mob-tied figures who had nothing to do with the construction industry.

Take the time Trump decided to lend his name to a line of luxury stretch limousines. The entrepreneur who came up with this wonderfully Trumpian idea was a wealthy and successful auto dealer from Long Island named John Staluppi. According to the FBI and its informants, Staluppi was also a made member of the Colombo crime family. As William Bastone detailed recently in The Smoking Gun, Trump proudly unveiled the lavish autos, complete with Italian leather upholstery, liquor dispensers, TVs and paper shredders, at a trade show in Atlantic City in 1988. Staluppi, whose record included convictions for theft of auto parts, wisely kept out of camera range at the trade show. He had been under steady investigation by federal and state law enforcement for over a decade and detectives had followed him to meetings with Colombo family boss Carmine "The Snake" Persico. Trump insisted he knew nothing about those problems and ordered twenty of the limos for his casinos.

The builder had few reservations as well about his dealings with another allegedly mob-tied businessman with a problematic background who ran a helicopter service ferrying high-rollers to Trump's casinos. The businessman, Joseph Weichselbaum, was living in an apartment in Trump Plaza, another of the tycoon’s East Side high-rises, when he pleaded guilty to federal charges of cocaine smuggling in 1986. The men were close enough that Trump agreed to accept part of the rent as helicopter service in barter. Weichselbaum also maintained Trump’s own private helicopter. And when Weichselbaum faced sentencing, Trump provided a letter to the court endorsing his friend as “conscientious, forthright and diligent.” Weichselbaum received a three-year sentence and came home to reside in an even posher pad at Trump Tower, where his girlfriend had managed to buy two combined apartments. When Trump was asked in 1990 by casino officials about his letter to the judge on Weichselbaum’s behalf, the casino mogul could not recall having written it.

Casino regulators raised another problem with Trump that year as well. They charged that his casinos had given free rein at the gambling tables to a wealthy horse breeder named Robert LiButti, who had insisted that no blacks or women serve as dealers while he was playing the craps tables. Trump’s casino executives complied. They had good reason to want to humor LiButti who lost more than $20 million in gambling wagers at the casinos between 1984 and 1990. To keep LiButti as a loyal customer, the regulars charged, Trump’s casinos had comped the gambler with gifts of luxury autos, including Rolls Royces and Ferraris, as well as trips to Europe and the Super Bowl.

Trump’s casinos were fined hundreds of thousands of dollars for the violations. But there was yet another issue: In 1991, casino regulators barred LiButti altogether from Atlantic City gambling, not for his bad manners but because they ruled he was an associate of Gambino crime family boss John Gotti. Part of the evidence against LiButti included wiretapped conversations in which he talked about flying with Trump in his copter and offering advice on running the casinos. But when a reporter asked Trump about his biggest high-stakes gambler, the casino mogul answered, “I wouldn’t know him if he was standing in front of me.”

Tom Robbins was a 2016 Pulitzer Prize finalist for his reporting on brutality in New York prisons, a collaboration between The Marshall Project and The New York Times. He reported on politics, labor, and organized crime for the Daily News and the Village Voice from 1985 to 2011.