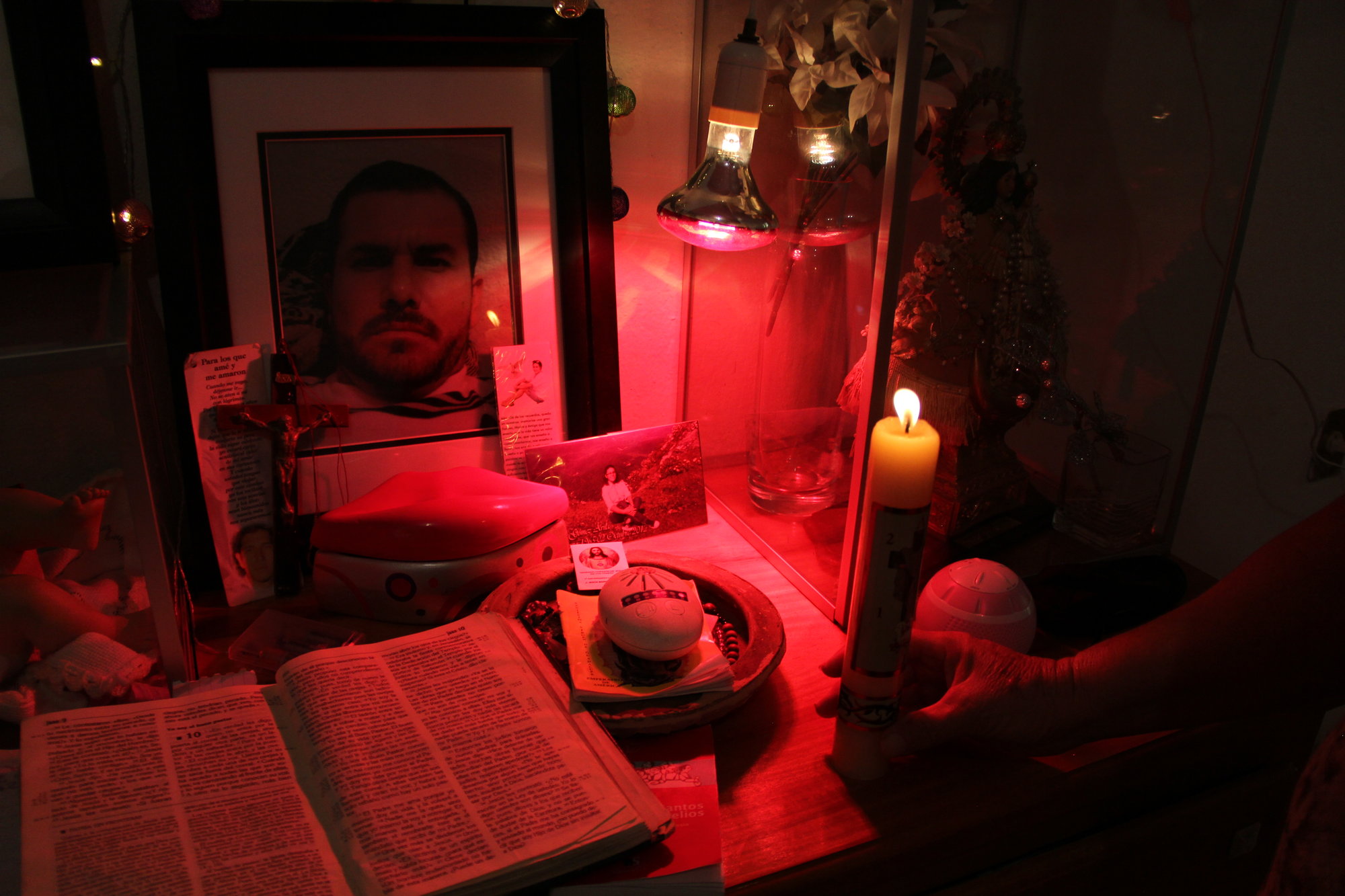 An altar to José de Jesús Deniz Sahagun in his old bedroom at his home in Jalisco, Mexico. “What happened to my son?” said Elisa Deniz. “I want to know the truth, because doubt hurts more than a lie.” Fernanda Echávarri/Latino USA
By Marlon Bishop and Fernanda Echávarri

In a special two-part radio series, NPR’s Latino USA investigates the unusual death of a man in an U.S. immigrant detention center, and what his death tells us about conditions —especially mental health services— inside the immigrant detention system. This investigation was reported with assistance from The Marshall Project.

On May 13, 2015, José de Jesús Deniz Sahagun celebrated his 31st birthday with family and friends at his home in Jalisco, Mexico—steps away from the Pacific Ocean. They were celebrating, but also saying goodbye. The following day, José traveled to a town on the Mexican border where he would attempt to cross into the United States and later reunite with his three young children in Las Vegas.

But things did not go as planned.

Seven days after his birthday, José died inside the Eloy Immigrant Detention Center in Arizona. His death was ruled a suicide, after the medical examiner found a thick orange prison sock lodged in his throat.

In the last 13 years, 160 immigrants have died in the custody of Immigration and Customs Enforcement (ICE), the federal agency that detains and deports people who are in the country without legal status, according to the agency’s own records.

The strange way in which José died, after spending just three days in detention, drew the attention of immigrant rights advocates. Of the at least seven suicides of ICE detainees since 2005, five happened at Eloy, prompting questions from advocates about the detention center’s readiness to provide mental health services to the immigrants detained there. And according to a recently released report from ICE, the detention center failed to meet several agency standards in the events leading up to José’s death.

José entered U.S. custody after he ran up to a Border Patrol checkpoint at the U.S.-Mexico border in Arizona, saying he feared for his life and needed help. Earlier that evening, he had called his sister Rosario in Las Vegas and told her that something had gone wrong with the smuggler his family hired to bring him across the border, and he took off running.

Once in custody, Border Patrol agents placed José in a holding cell. Agents reported that he was hysterical and that he had tried to hurt himself so badly that they had to take him to a hospital in Tucson, Ariz., according to an internal investigation into José’s death.

After being released from the hospital, José was taken to Eloy, about two hours north in the middle of the Arizona desert, and booked into the Eloy Detention Center, which holds up to 1,600 immigrants on any given day. During intake, there was no documentation of José’s suicide attempt and hospital visit.

Eloy, like many ICE detention centers, is owned and operated by the Corrections Corporation of America (CCA), one of the nation’s largest private prison companies. In the immigrant community, Eloy has a reputation as one of the worst places to be detained, with “constant complaints about medical care, mental health care,” said Victoria Lopez, a lawyer with the American Civil Liberties Union. It was common, she said, to be “placed in segregation without knowing why or when you'd get out.”

Although ICE facilities look like prisons, the people detained there are held for civil immigration violations, not criminal proceedings. While there are detainees with criminal records, many —like José— have no criminal background and are waiting to be deported or to fight their case in immigration court.

Once inside the Eloy Detention Center, José was able to call his sister, Rosario. She said her brother sounded glad to be in the U.S., but anxious to get out of detention. That was the only time they spoke on the phone.

Over the next couple of days, she and her brother Gabriel tried to call Eloy several times to get in touch with José, but were not able to speak with him.

What they didn’t know was that José had become agitated and tried to run away. On several occasions he was tackled to the ground while screaming “help me”, according to a report by ICE’s Office of Detention Oversight. Detainees who were there at the time also reported hearing José yelling and said that he was desperate to speak with his family.

A psychologist inside the detention center placed José on suicide watch with a guard observing him for 24 hours, a practice that is standard for suicidal detainees. The next day, the doctor removed José from suicide watch but kept him in solitary confinement with a lower level of supervision—a guard checking on him every 15 minutes.

That day, during the 5:30 p.m. check, the guard noticed José was face down and not moving. Seven minutes went by before the guards entered José’s cell, according to surveillance footage obtained via public records request by Latino USA.

An ICE internal review of the death said that the guards waited longer than they should have to enter the cell. A corrections medical expert agreed. 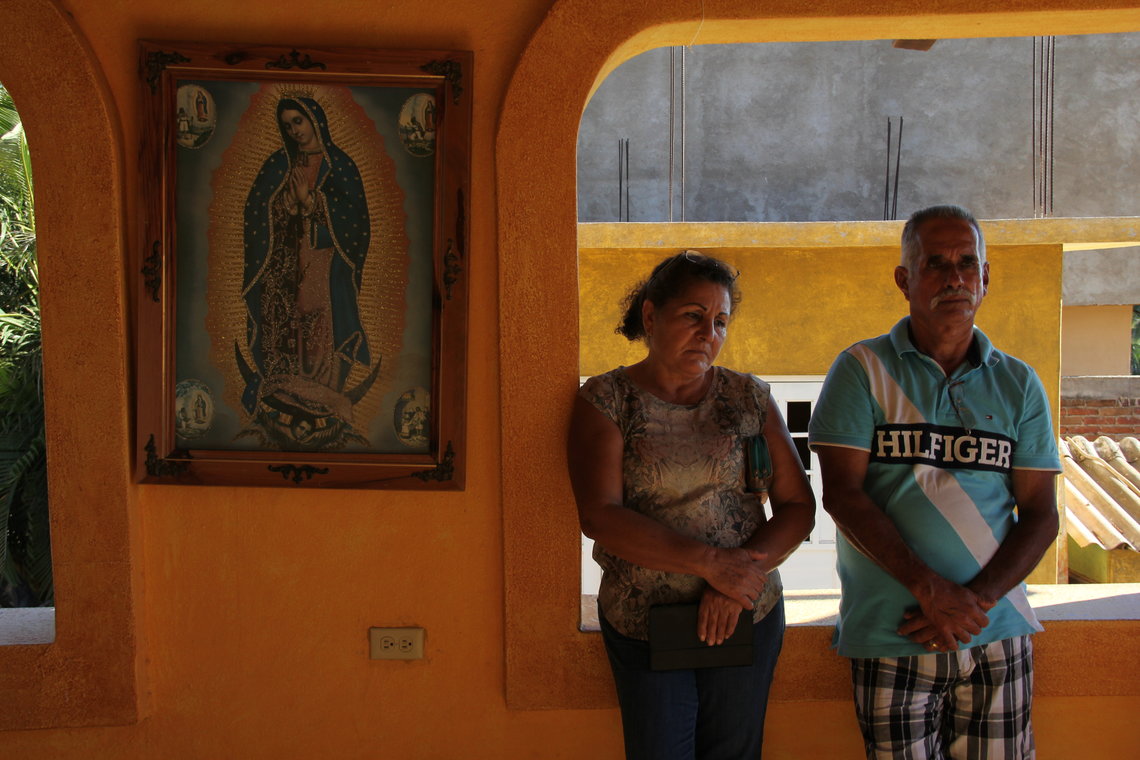 “Even today I can’t accept my son’s death,” said José de Jesús Sahagun's father, Silverio Deniz, right, with José's mother, Elisa Deniz, in Jalisco, Mexico in 2016. “I feel like there’s a part of my heart missing.”

“Waiting to enter a cell even though you think there might be an emergency is sometimes the right decision” for the safety of correction staff, said Dr. Marc Stern, a correctional physician and professor at the University of Washington School of Public Health. “But in this case, once you have three or four officers and you believe you have enough force to be able to overcome the detainee, then it’s time to go in.”

During the internal investigation, ICE officers found that the Eloy Detention Center failed to meet several detention standards in José’s case, including failure to have a mental health staffer on call 24 hours a day.

The investigation found that Eloy does not have a suicide prevention plan despite having had three suicides in three years and five since 2005.

“In this case, especially because it happened after other suicides in the same facility, it raises serious questions about how seriously this facility is taking suicide prevention,” said Grace Meng, a senior researcher at Human Rights Watch, which recently published a report on deaths in immigration detention.

ICE declined to comment on this specific case, but Liz Cedillo Pereira, a senior advisor to the director of ICE, said, “We’re all adhering to a set of standards and if those standards are not being met, then we would take quick action to adhere to those standards. We’re dealing with a dynamic population that’s coming from all over the world with varying medical history. We’re doing the best we can here to address all those needs and to continue leaning forward, to provide for different ways to take care of the individuals in our custody.”

According to a 2013 report by the Migration Policy Institute, the U.S. spends more on federal immigration enforcement than on all the other principal federal criminal law enforcement agencies combined. CCA, the private-prison company that runs Eloy, reported an increase in revenue of over $400 million in 2016 year, in part because of the high demand for detaining immigrants.

On any given night, at least 34,000 immigrants are held in detention. Some people spend weeks in detention. Many spend months, and some spend years.

For Dr. Allen Keller, director of an New York University program for survivors of torture, José’s case illustrates the inhumanity of a system whose default solution is to lock people up.

“This was a man who may have had a very serious illness, depression, but he was also a man who had a family that he missed terribly,” he said. “He had not been a danger to our country. And in the equation, it got lost that this was a human being.”