My Life as a Blind Man in Prison

A prisoner’s world becomes even smaller.

By Burl Washington as told to Christie Thompson
Perspectives from those who work and live in the criminal justice system. Sign up to receive "Life Inside" emailed to you every week.

I wasn’t blind when I entered federal prison. In fact, at the time of my arrest on April 19, 2006, I was driving my car. But I have glaucoma, and my eyesight began to fade once I was inside. Colors lost their vibrancy, the TV wasn’t as clear anymore — that’s how it started. I bought magnifying glasses, and kept telling prison doctors, “My vision is just getting worse and worse.” It’s been difficult for me to get the treatment and help I need, and even now, my eyes are extremely painful.

When I started going blind, I was still trying to fight my case, and remember sitting in the law library, straining to read the books. But after I completely lost my eyesight in 2012, my attempts at overturning my conviction quickly fell by the wayside.

Now I spend my days sitting in my cell, limiting myself to my direct surroundings. It’s easier this way, even if it feels like I’ve put myself in solitary confinement. I used to participate in prison programs, used to work in the kitchen, used to go out to the recreation yard all the time.

I even asked prison officials if there was someone who could teach me braille as a way of opening my world back up. They politely said no. Now I come out of my room for maybe one hour a day to get some air and take a shower. If I’m lucky, I make it to the microwave. That’s pretty much it.

That’s all my mind can handle right now: counting steps. 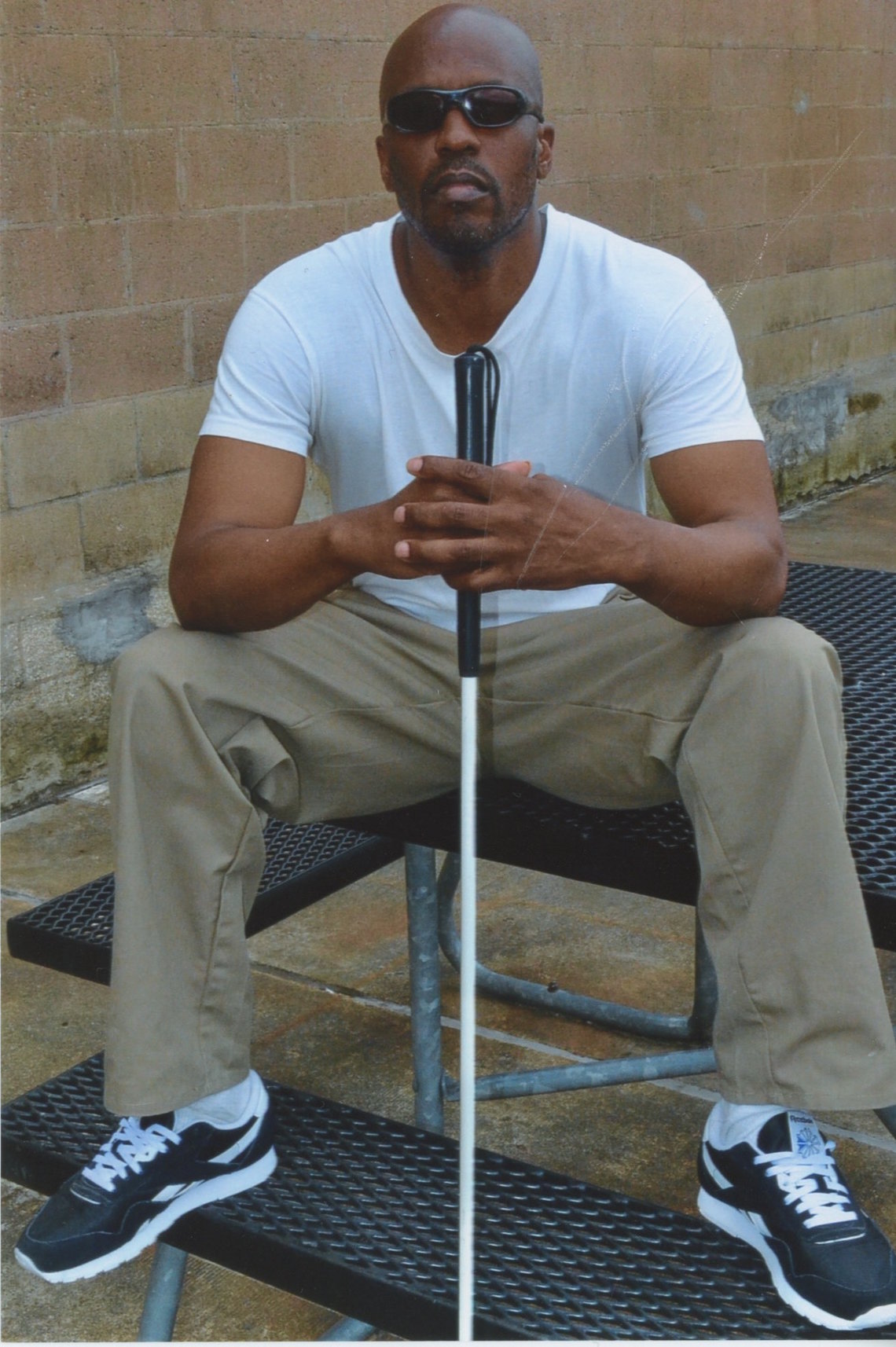 A snapshot of the author taken earlier this year at FCI Estill in Estill, S.C.

Every night, I set out my toothbrush, toothpaste, and other hygiene items on top of my locker, so I know where it’s at. I can’t see how dirty my room is, but every day they tell me you need to clean your room, and I try to hit every spot.

When I go eat, I come to my door and call my guy. We’ve been together since last October. I say, “Hey, Antwane.” He responds, “What is it?”

“Man you know what it is. Get me there!”

‘Twane ain’t had no training or anything, but I grab his shoulder and we get going. He leads me from my door to the chow hall, makes sure I have my tray, gets me to the table and then takes my tray. He pretty much leads me everywhere. There are times when ‘Twane’s not around, though, and I gotta try to make it on my own. When that happens, I usually just go back to my cell.

For a while, I was being harassed because I was walking on somebody’s shoulder — it made it look like ‘Twane was my boyfriend rather than a nice guy helping me get from A to B. I’m either holding his hand, his arm, or his shoulder while we walk on the compound. That caused a lot of trouble for me. I’ve even been sent to solitary for my protection, and I feel safer there, because I ain’t gotta worry about the next guy. But I lose so much. In solitary, you only get one phone call a month. In some cases, you don’t get visits. And then for me, I ain’t got nobody to read my mail. I just stack up my letters.

Now I have the white cane, issued by the prison. And when people look at me, they know, Oh, he’s a blind guy, he’s not that guy’s boyfriend. It makes a difference.

My life is so different now. I don’t do crowds. I don’t eat with the general population. I don’t often go to the rec yard. I don’t feel safe out there. I just stay away from everybody.

Burl Washington is incarcerated at FCI Estill, a federal prison in South Carolina. In 2008 he was sentenced to 30 years for distribution of drugs, including Fetanyl, that resulted in death.