A new book brings attention to the deadly 1971 prison uprising. Reporters for The New York Times and The Marshall Project describe what has changed since then, and what hasn’t.

In her new book, “Blood in the Water,” Heather Ann Thompson offers the most detailed account yet of the historic uprising by inmates over squalid conditions at Attica Correctional Facility in western New York. On Sept. 13, 1971, Gov. Nelson A. Rockefeller ordered state troopers, armed with rifles and handguns, to storm the prison and quash a four-day rebellion. By the time it was over, 39 people had been shot dead, including 10 prison employees. Four others died earlier.

While the retaking of Attica was the bloodiest event in a decade of civic upheaval, it spurred landmark prison reform efforts. In negotiations, Russell G. Oswald, the state corrections commissioner, agreed to 28 of the inmates’ demands meant to expand their rights and improve prison conditions. 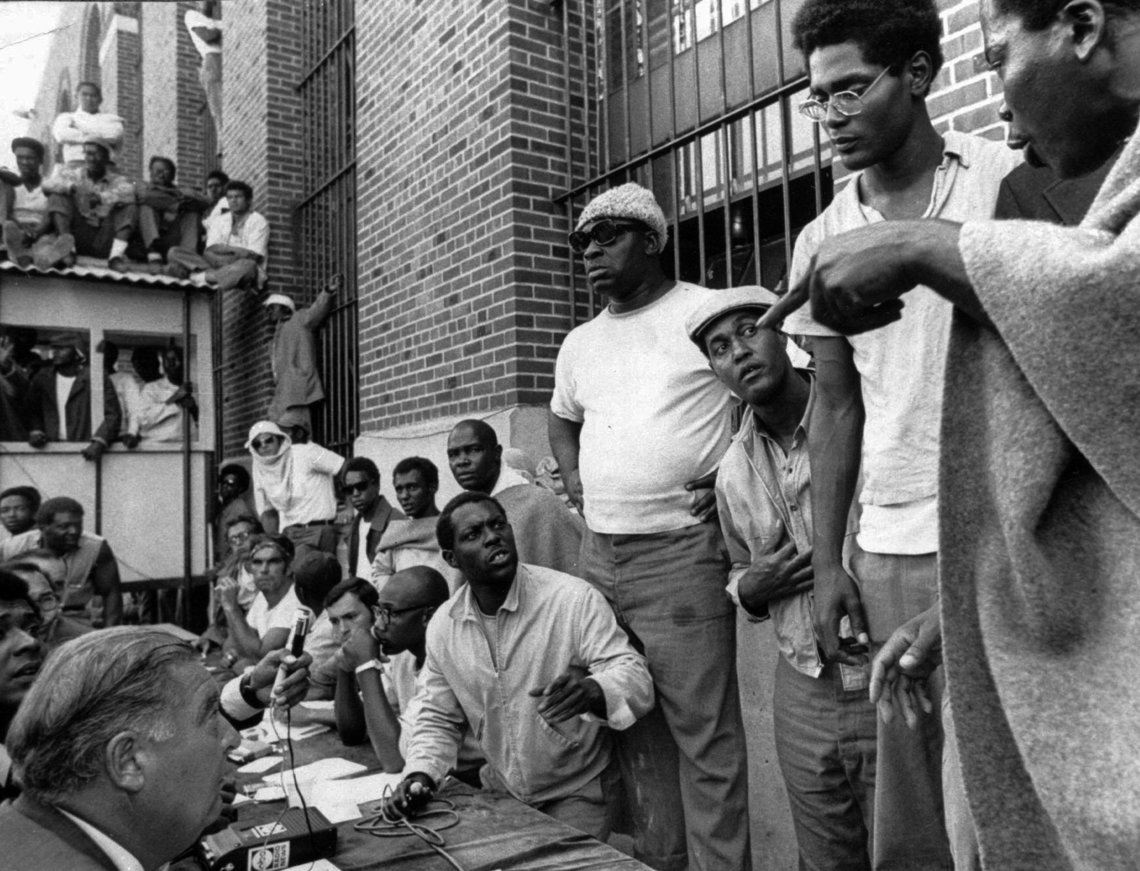 Before the riot, prisoners in New York got one roll of toilet paper a month and were permitted one shower a week. Any inmate letters written in a foreign language were thrown away. Islam was not recognized as a legitimate religion.

Today, there are Muslim chaplains in most of the state’s prisons, inmates can take their high school equivalency tests in Spanish and access to law libraries is guaranteed. They are also entitled to more regular showers.

Yet, in traveling the state to report on the prison system for The New York Times and The Marshall Project, we have been struck by how many of the changes that were promised were never made or have been rolled back. Following are some of the reforms promised in 1971 and where they stand today.

Attempts to establish an independent ombudsman for the state’s prisons have gone nowhere. The latest effort came this year from Assemblyman Daniel J. O’Donnell, a Manhattan Democrat who is chairman of the corrections committee. The powerful corrections officers’ union opposed a bill proposed by Mr. O’Donnell, which passed the Assembly but died in the Senate, where it was blocked by Republicans from districts where prisons are major employers.

REFORM NO. 5 Recommend the application of New York State’s minimum wage standards to all work done by inmates.

This, too, never happened. After the uprising, Commissioner Oswald said the only way the state could afford to pay inmates the minimum wage would be to charge them room and board. The current wage paid to prisoners is from 10 cents to 25 cents an hour, according to the corrections department. That figure has not increased in at least 20 years, according to the Correctional Association, a watchdog group empowered by the state to monitor prison conditions.

This has been one of the most successful changes to come out of that era. There are now over 160 chaplains employed in the prisons, including priests, ministers, rabbis and imams. Muslims are permitted to wear kufis and to own prayer rugs. Mealtimes are altered to accommodate fasting during Ramadan. Though the length of prisoners’ hair is generally regulated in prison, Rastafarians, Sikhs, Taoists, Native Americans and Orthodox Jews are exempt from those regulations.

During the 1970s and ’80s, educational opportunities for prisoners expanded significantly. Inmates could earn bachelor’s degrees and even master’s degrees at some New York prisons. But in the 1990s, an era of tough-on-crime political rhetoric, there was a backlash. Under President Bill Clinton, a Democrat, the federal government eliminated education grants for inmates; Gov. George E. Pataki of New York, a Republican, ended state grants. Only recently, under Gov. Andrew M. Cuomo, a Democrat, has there been a move to restore some of these programs.

In the aftermath of the uprising, Prisoners’ Legal Services of New York was created to give prisoners legal representation in civil and administrative matters, but there have periodic cuts to its funding over the years. Inside prisons, inmates are now guaranteed access to law libraries, but they are provided no representation in disciplinary matters. As a result, they virtually never prevail in prison hearings, which are often overseen by uniformed staff members. Inmates are also not entitled to legal representation at parole hearings.

Few things are more central to an inmate’s existence than food. It can be a source of much tension — and, at times, violence — on a cellblock. Inmates held in solitary confinement complain that as retribution, guards will cut their portions or deny them meals altogether. Only in recent months have prisons been prohibited from feeding inmates “the loaf,” a reviled concoction of dried bread and root vegetables.

There have been some improvements. Inmates can order special meals, including those that are kosher. Fresh fruit, though, is still limited. Inmates typically receive one piece of fruit two to three times a week, according to the corrections department.

REFORM NO. 16 Provide adequate medical treatment for every inmate.

Since the Attica uprising, the number of medical personnel employed in New York’s prisons has increased and become more professional, according to the Correctional Association. Even so, in 2013, the most recent full year for which data is available, inmates filed more complaints over medical care than over any other issue. In interviews, prisoners have described long waits to see doctors and nurses, and receiving ibuprofen all too often as the all-purpose treatment for any ailment. Prisoners say security staff members sometimes bully medical personnel into playing down injuries, especially those resulting from physical altercations with officers. In December, The Times published an article about one inmate, Leonard Strickland, who died after a violent confrontation with officers. The story included a 45-minute video that showed officers dragging Mr. Strickland, near death, through hallways while a prison nurse looked on and did nothing.

REFORM NO. 17 Institute a program for the recruitment and employment of a significant number of black and Spanish-speaking officers.

At the time of the riot, there was just one Hispanic officer among more than 500 guards at Attica. That ratio has barely changed since then. As of July 1, 96 percent of the officers at Attica were white, 2 percent were Hispanic and 1 percent were black, according to the corrections department; by contrast, about two-thirds of the state’s inmate population is black or Hispanic. The same racial disparity exists in almost all of the maximum-security prisons upstate: At Clinton Correctional Facility, where two murderers escaped last year, the work force was 99 percent white in 2012, when the Correctional Association last surveyed the prison.

REFORM NO. 18 Establish an inmate grievance commission comprised of one elected inmate from each company, which is authorized to speak to the administration.

Prisoners won this right, but it has had little practical effect on everyday life. Prisoner-elected representatives are allowed to sit in on grievance hearings, except for those weighing claims of abuses by staff members, but they have no influence over the outcome. Grievances alleging employee misconduct — which account for the second-highest number of complaints — are heard solely by prison administrators. Inmates say their complaints often lead to retaliation by officers. Another reform made after the Attica uprising was the creation of elected inmate liaison committees to meet regularly with prison officials, but few of these bodies have clout. Still, the committees have sometimes served as early warning systems. The committee at Clinton was the first to report that inmates were being beaten and tortured after the escapes there last year. Those allegations, which The Times reported on, have yet to be addressed publicly.

REFORM NO. 24 Remove visitation screens as soon as possible.

A 1982 federal court decision expanding prisoner rights helped to bring change on this front. At the time of the riot, inmates were prohibited from having physical contact with visitors. They could not kiss their spouses or hold their children. In most prisons, they peered at visitors through a mesh or plexiglass screen. Today, only inmates in solitary confinement sit behind a barrier during visitation. Otherwise, inmates typically sit at tables with their families, sharing a meal or playing cards. For children, there are play areas with toys and Disney movies on TVs.

REFORM NO. 26 Institute a 30-day maximum for segregation arising out of any offense. Every effort should be geared toward restoring the individual to regular housing as soon as possible, consistent with safety regulations.

Only in recent years have court-ordered reforms limited the amount of time that inmates can spend in solitary confinement. Most of the recent changes are meant for the most vulnerable inmates, whose time in isolation is supposed to be strictly limited. During weekdays, 16- and 17-year-olds must be allowed outside their cells for at least six hours a day. Inmates with serious mental illness can be held in solitary confinement for no more than 30 days at a time before being moved to a psychiatric unit. Pregnant women are also protected. Though there are limits for first-time offenders in the general population, inmates can still spend years, even decades, in solitary.

REFORM NO. 27 Permit access to outside dentists and doctors at inmate’s own expense.

Except in very rare cases, this change has never been made.