When the Money Runs out for Public Defense, What Happens Next? 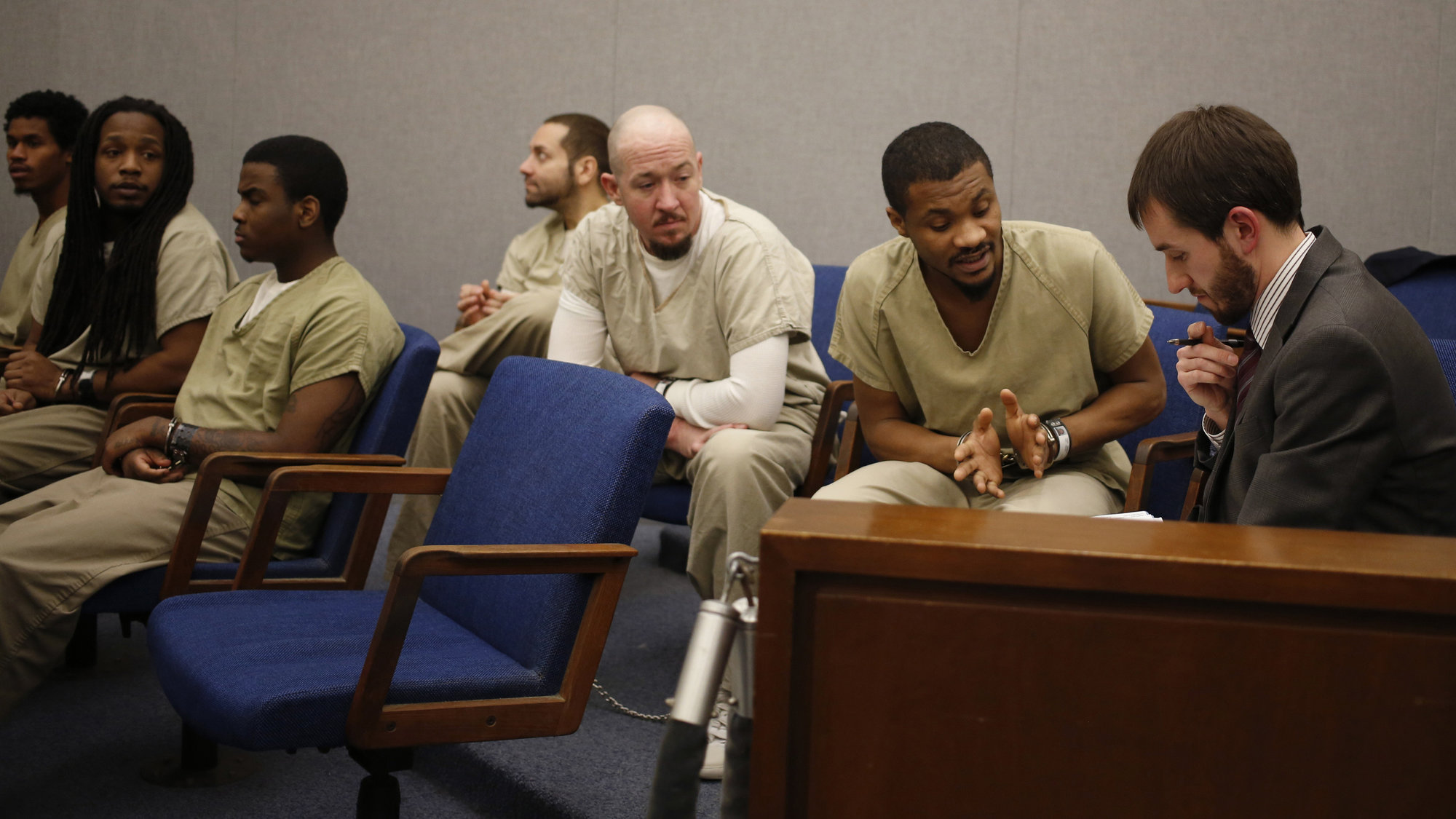 A public defender with a client in St. Louis in 2014. Missouri’s indigent defense system, like those in other states, has absorbed simultaneous funding cuts and caseload increases in recent years. Luke Sharrett/The New York Times, via Redux
By Oliver Laughland
Video by Laurence Mathieu-Leger

Would a woman in Lexington, Ky., who faces fraud charges, still be in jail if her lawyer had the time to appeal a $40,000 bail bond?

Will a 50-year-old illiterate man in Cole County, Mo., charged in August with vehicular assault and facing over a decade in prison, be assigned an attorney with the resources to defend him?

Part one of a three-part series about the underfunded public defenders of Louisiana.

How many of the 30 defendants present for a single “mass plea” hearing in Louisiana’s 16th Judicial District in June would have pleaded not guilty if they’d had more than 20 seconds to meet with their lawyer?

In 1963, the landmark Gideon v. Wainwright Supreme Court ruling enshrined the constitutional right of indigent criminal defendants — those who cannot afford to pay for a lawyer — to receive legal counsel. But 53 years later, as the rate of incarceration across the country has more than quadrupled, and up to 90 percent of criminal defendants in the U.S. qualify as indigent, this mainstay of the justice system has reached a breaking point.

“Public defenders are the pack mules of the system,” said Ed Monahan, Kentucky’s public advocate and chief defender. “Pack mules can carry a lot. But you put one more box on an overburdened mule, and it won’t be able to function.”

The depth of the crisis, and the responsibility for dealing with it, varies from state to state, because there is no uniformity in how access to a defender is funded and administered. In Kentucky, for example, the state senate rejected a $6.2 million budget increase proposed by the Republican governor, Matt Bevin, which would have created 44 desperately needed new positions in the defender’s office.

Kentucky defenders took, on average, 448 cases apiece in the past year, 54 percent above recommended national standards. Attorneys take on 11 percent more cases than they did a decade ago, and in areas like Louisville, they now take close to double the national standard.

In Utah, an estimated 62 percent of all misdemeanor defendants had no access to counsel. Indigent defense is funded entirely at the county level, and in all but two counties, it’s provided by contracted attorneys who are not subject to state oversight and are paid a fixed fee per case. A recent study by the Sixth Amendment Center, an advocacy group for the right to adequate defense, concluded that defense attorneys in most of Utah are financially motivated to work their cases as quickly as possible, regardless of the merits or complexity.

And in Missouri, where the defender office is funded entirely at the state level, the Democratic governor, Jay Nixon, has repeatedly blocked the passage of state legislation to cap defenders’ workload and increase their funding. Most recently, in July, Nixon withheld $3.5 million of a relief fund approved by the state legislature to hire additional staff.

Since 2014, said the director of the state’s defender program, Michael Barrett, the office has lost 30 staff members due to funding cuts, and is taking on 12 percent more cases — now 82,000 a year.

“Given the extraordinary circumstances that compel me to entertain any and all avenues for relief, it strikes me that I should begin with the one attorney in the state who not only created this problem, but is in a unique position to address it,” Barrett wrote. At a preliminary hearing weeks later, a judge handed down a one-page ruling which found that Barrett did not have the authority to compel the governor. The case has now been assigned to one of his overloaded attorneys. 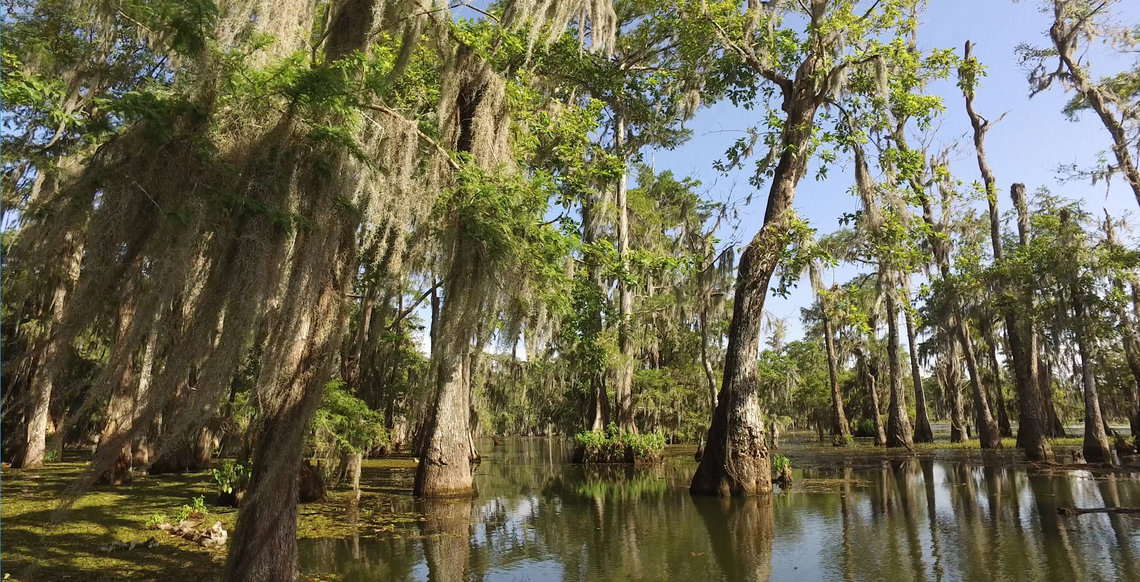 Laurence Mathieu-Leger for the Guardian

But perhaps nowhere is the crisis felt more acutely than in Louisiana, which incarcerates Americans at the highest rate of any state, and where the public defender system is already on the brink of meltdown.

Unlike any other state, Louisiana pays for its indigent defense system primarily through speeding tickets and other locally generated revenue, rather than guaranteeing funds through the budgeting process. As a result, the finances of each defender's office are subject to an extraordinarily high level of uncertainty, especially in districts without major highways — and during floods and other emergencies, when the police and courts are doling out fewer tickets.

Earlier this year, that unstable system was thrown into further disarray by Louisiana's worst budget crisis in decades, which came in the wake of a steep drop in oil prices and years of tax-slashing by the former governor, Bobby Jindal. Around the state, defenders went into triage, putting thousands of their clients on wait lists for a lawyer.

But national attention on the crisis has waned, in part because conditions have improved in the city that receives no shortage of media coverage, New Orleans. After receiving a small influx of funds, the public defender's office there ended its hiring freeze while reducing its wait list to fewer than 40 defendants.

Out in Louisiana's 63 other parishes, however, much of this summer's improvement in the indigent defense system is shallower than it appears. In Caddo Parish, the courts have addressed the public defender's funding problems by appointing all the lawyers in town — including tax attorneys, real estate attorneys, and adoption attorneys — to the cases that were being neglected, which has superficially resolved the wait list. In Winn Parish, a prosecutor is now working half-time as a defender, another makeshift and constitutionally questionable way of making do in the absence of funding.

In other places, a minimal level of defense work has simply become the new normal. In the 16th Judicial District, up to 50 poor defendants are convicted and sentenced — at once — for major felonies carrying up to decades in prison, while the single public defender representing all of them struggles to present any of the facts and arguments in their separate cases. And in the 20th Judicial District, exactly one lawyer is now employed to run a defender's office that covers two parishes and over 900 cases.

During the next two days, The Marshall Project and The Guardian will journey out to these locales, where some increasingly unorthodox forms of representation have now become unexceptional for poor people accused of crimes.

This is an edited version of an article that appears on Guardian US.