The Most Dangerous Neighborhood, the Most Inexperienced Cops

In Chicago and elsewhere, rookies are cannon fodder while vets police the safer neighborhoods.

The officers who patrol the Chicago’s 11th Police District face a daunting challenge. The district, which is centered around Garfield Park on the city’s West Side, has the highest murder rate in the city, and it’s rising fast. By late August the district already had more murders than in all of 2015, when it led the city with 48 homicides.

This article is published in partnership with City Bureau, a nonprofit community news service covering Chicago.

The officers of the 11th District stand out in another way. They are the youngest and least experienced police officers of any district in Chicago.

The average officer in the 11th joined the force 10 years ago; over a third of the district’s officers have less than five years on the force. Meanwhile, most veteran officers with patrol experience in the late 1990s — the last time Chicago’s murder rate was as high as today — work far from Garfield Park. Half a dozen miles to the north one of the city’s safest districts, Jefferson Park, has only three officers with under 10 years of experience. Over half the patrol officers are 20-year veterans.

The divide between the police officers who patrol Garfield Park and Jefferson Park reflect divisions that hold true across Chicago and in police departments across the country, where high-crime areas are frequently staffed with rookies while the veterans flock to safer districts. Policing experts say that the practice is commonplace, since senior officers usually get priority when they ask to transfer, though Chicago’s union-mandated transfer process exacerbates the situation, tying the hands of commanders in deciding how to staff their districts. And while some say that the divide has its benefits, citing younger officers’ energy and ability to connect with at-risk youth, there are also significant risks—to the safety of citizens and officers, and to police departments that already struggle to forge lasting connections in many communities.

“You’re putting your least experienced officers in the situations that really call for the most experience and best judgement,” says Sam Walker, a professor and policing expert at the University of Nebraska. According to Walker, younger officers are more likely to engage in overly aggressive policing, particularly if not given proper training.

A lack of experience can also have deadly consequences. Last year, a Buzzfeed News analysis found that younger officers are more likely to use force — a finding also backed by a 2008 study of 186 officer-involved shootings. In Chicago, a database of police shootings compiled by the Chicago Tribune showed that the average officer who opened fire had about nine years of experience, compared to 15 for the department as a whole.

Three young Chicago officers recently came under scrutiny for their use of force in the fatal shooting of 18-year-old Paul O’Neal. Body camera and patrol car footage released by the city showed two officers firing at O’Neal as he plowed past the officers while driving a stolen car. Moments later, after a short foot chase, a third officer fatally shot O’Neal - who was unarmed - in the back.

Body camera footage showed the moments before and after the fatal shooting of Paul O'Neal by the police in Chicago on July 28, 2016. Independent Police Review Authority

Joseph Giacalone, a retired New York police sergeant who teaches at the John Jay College of Criminal Justice and has watched the videos, criticized the decision to fire on the car, pointing out that the suspect had not displayed a weapon. Superintendent Eddie Johnson quickly suspended the police powers of the officers who opened fire. All three had less than four years of experience at the time of the shooting.

As Chicago grapples with its most violent year in over a decade, the burden of bringing down the city’s rising murder rate falls disproportionately on its newest officers. Among Chicago’s 22 police districts, the five with the highest murder rates in 2016 are also the five where officers have the least experience, averaging ten years on the force. By comparison, the five safest districts are staffed by some of the most experienced officers, with an average of 18 years of experience.

Experience of Patrol Officers by District and 2016 Homicide Rate 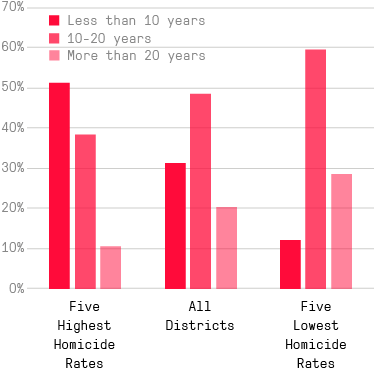 Data obtained from the CPD through a Freedom of Information Act request show 7,300 officers in the Bureau of Patrol (not counting sergeants and other supervisors), accounting for over 60 percent of the entire CPD. Patrol officers are the backbone of CPD, responding to citizen calls as well as walking and driving through their assigned beats.

Meanwhile, veteran officers are clustered in safer districts. Officers with over 20 years of experience make up just 10 percent of patrol officers in the five districts with the highest murder rates, but 30 percent of the city’s safest districts.

Younger officers policing high-crime districts have been asked to play a central role in reducing Chicago’s rapidly rising murder rate. Under former superintendent Garry McCarthy, the CPD flooded high-crime areas with officers on overtime shifts in an effort to tamp down crime. Superintendent Eddie Johnson reconfigured the program in July, emphasizing the role of officers who serve full-time in high-crime districts and have greater opportunity to develop strong community ties.

The movement of veteran officers out of districts on Chicago’s South and West Sides exposes a challenge for Johnson’s efforts to encourage better community ties. Jeffrey Booker, a retired CPD officer who served for more than 21 years on the force, says “the police see themselves as separate from the community” in many South and West Side neighborhoods.

But the concentration of younger officers in higher-crime districts can have some advantages. Giacalone, the retired New York police sergeant, argues that “policing is a young person’s job” and that younger officers are often better able to connect with troubled young people than officers in their 40s and 50s.

Though the rookie/veteran divide is present in many police departments, Chicago does have policies that may leave its force even more skewed. The Chicago Police Department’s union contract allows officers to regularly bid for open positions in other districts. Bids for patrol officer positions are decided primarily by comparing the seniority of the officers, and officers can transfer using a bid once every 12 months.

That makes it relatively easy for officers to move and ties the hands of the department in terms of determining which officers serve in which districts. Giacalone notes that when he served in the NYPD, “it can take years for people to get transfers.” He remembers that NYPD officers sometimes jokingly called the official transfer form a “black hole.”

Walker notes that “the one virtue of the seniority system is fairness” since it reduces the power of favoritism, a longstanding concern in Chicago. He also points out that in some cities the introduction of a seniority system helped end practices where the worst officers were purposely assigned to minority neighborhoods.

Walker and Giacalone both argue that the risks of large numbers of younger officers can be offset by a strong contingent of sergeants and field training officers. These figures play a major role in shaping rookies after they’re assigned to a district.

The CPD’s training programs have been subject to serious criticism. The Police Accountability Task Force, which convened in the wake of the Laquan McDonald video release that led to months of protests on the streets of Chicago, declared in its report that the “CPD has consistently failed to devote adequate resources to training officers once they leave the Academy.” The report highlighted the need for increased in-service training and a robust field training officer (FTO) system - programs that policing experts like Walker have pointed to as vital for preparing young officers entering stressful environments.

Nationally, training reforms have been cited as a major component of broader police reform. The President’s Task Force on 21st Century Policing, convened by President Obama in 2014 following several high profile incidents where police officers shot and killed black men, emphasized training and education as one of six crucial areas for improvement in policing. The Task Force’s final report highlighted the importance of programs like fielding training officers, encouraging improvements to the existing model based on San Jose’s well-regarded FTO program. San Jose’s police department is less than one-tenth the size of Chicago’s, but it boasts nearly the same number of designated field training officers.

The police seniority system is deeply embedded in Chicago, but Walker notes that the seniority rules — alongside in-service training and supervision — “are the little details that really make a difference in policing.” Still, Booker, the retired Chicago patrolman, is more pessimistic about change: “there’s no formula that’s going to answer this — it has to do with the culture — the formal and informal culture of the police department.”