A stint in juvenile detention excluded one from the financial support that automatically went to the other.

For the brothers Terrick and Joseph Bakhit, childhood in Southern California was a precarious and often brutal experience: a mother addicted to crack and often in jail, a grandmother who beat them. In 2007, when Terrick was 12 and Joseph was 11, they ran away to an older sister’s home but eventually landed in foster care, where a good outcome was anything but certain.

Although child-care officials had promised to keep them together, they were separated and ended up in a series of foster families or group homes. At 17, Terrick, demoralized and unruly, “made the stupid decision of stealing a group home car,” was arrested and sentenced to juvenile detention for 11 months. Adrift upon release and without financial or personal support, he ended up homeless and addicted to crystal meth.

Joseph was in seven different foster homes, but his path out of childhood turned out to be far smoother. He became valedictorian of a high school that pushed him to excel and was admitted to the University of California, Berkeley.

Both young men have now managed to put together stable lives. But their vastly different experiences can be traced, in part, to state legislation that boosted Joseph’s chances and diminished Terrick’s.

In 2010, California enacted legislation called the Fostering Connections to Success Act. Joseph benefited from the law, which provides regular payments to foster youth between the ages of 18 and 21. When he turned 18, in 2014, Joseph started receiving a monthly check for $799. That, combined with scholarships, financial aid and a part-time job, allowed him to study at Berkeley without worrying about housing or ordinary living expenses.

But the law failed to cover Terrick. Because he turned 18 while incarcerated and didn’t have a foster care placement order waiting for him when he was released, he was ineligible for the benefits that Joseph got. A bill that would have extended payments to youths who had been held in juvenile detention facilities died in a State Senate committee in 2015.

That bill was sponsored by Sen. Jim Beall, a Democrat from Santa Clara County, who took action after reading about the Bakhit brothers on the website of the Chronicle of Social Change. The story, by Brian Rinker, with photographs by Max Whittaker (whose pictures are reproduced here), spurred Beall to sponsor a bill that would prevent young people like Terrick from falling through the cracks.

But the legislation, Beall said, faced strong headwinds from local probation departments, which argued that the proposed program would cost “hundreds of millions of dollars.” Beall says that the program would have cost only about $550,000. “I don't think that is a large amount considering you can offset that by reduced incarceration,” he said. He hopes to revive the bill at a later date. 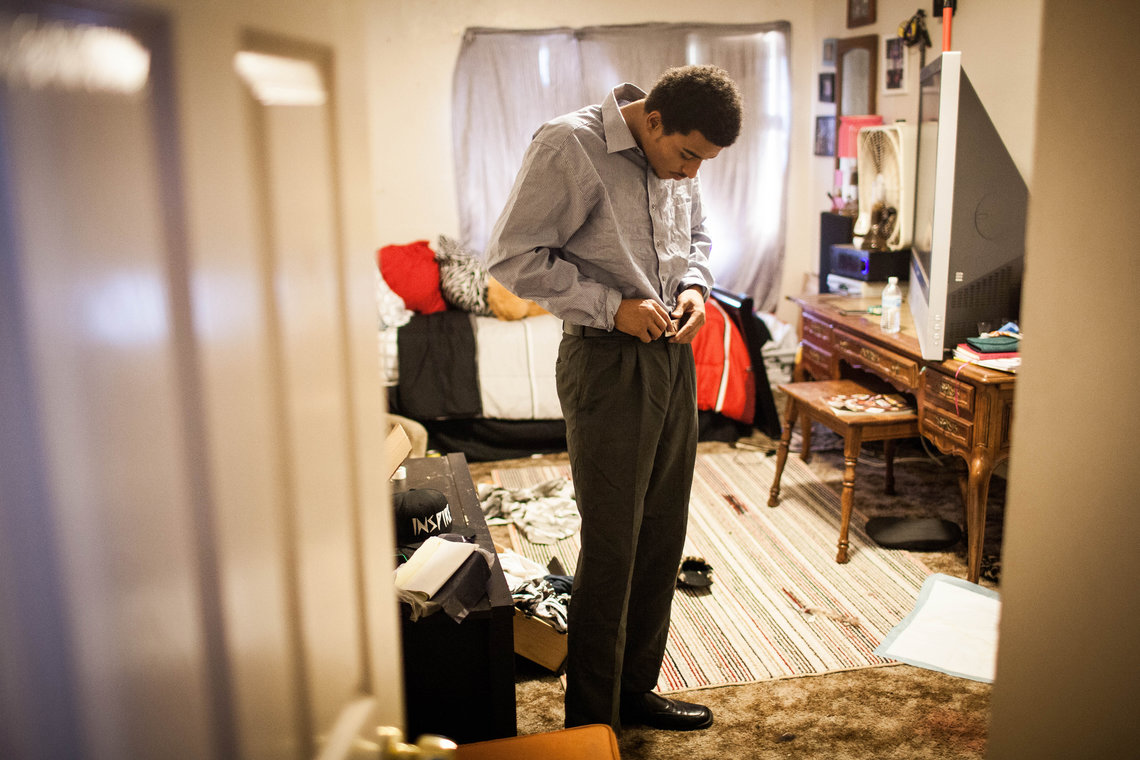 Terrick, in 2014, getting ready to interview for a sales job. 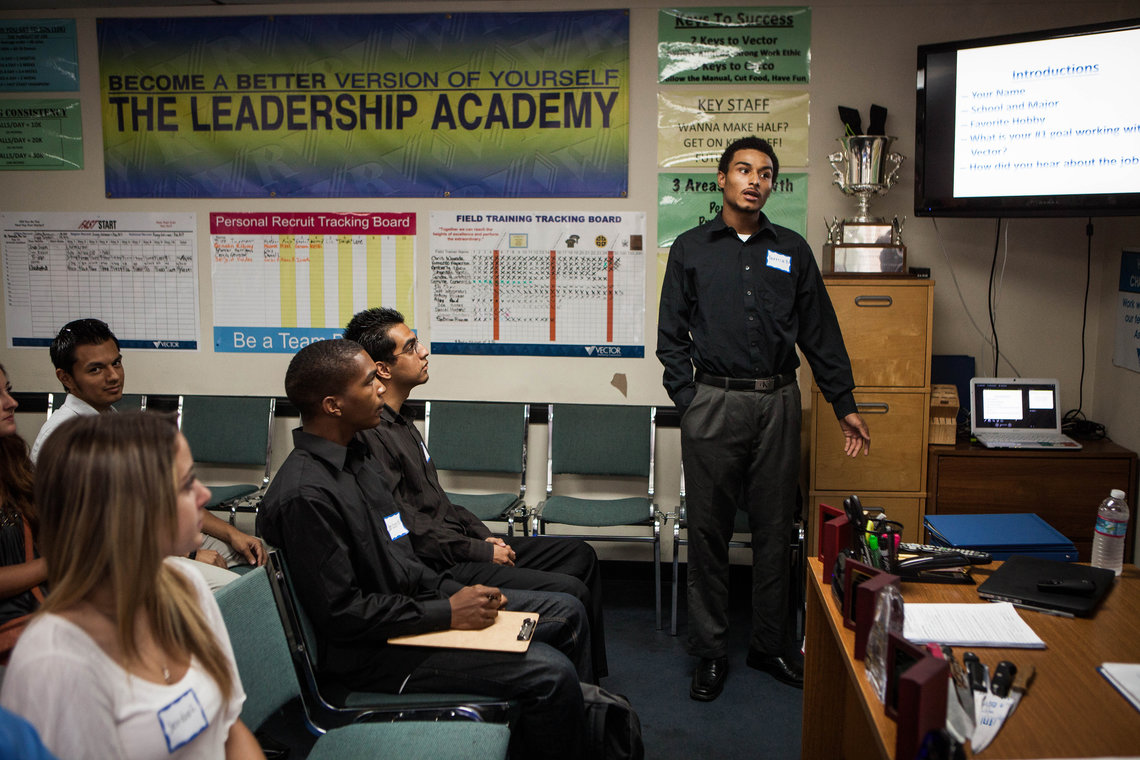 The job turned out to be a position selling kitchen knives on commission. Terrick showed up for training and introduced himself to the group. He said it was his first public speaking experience. 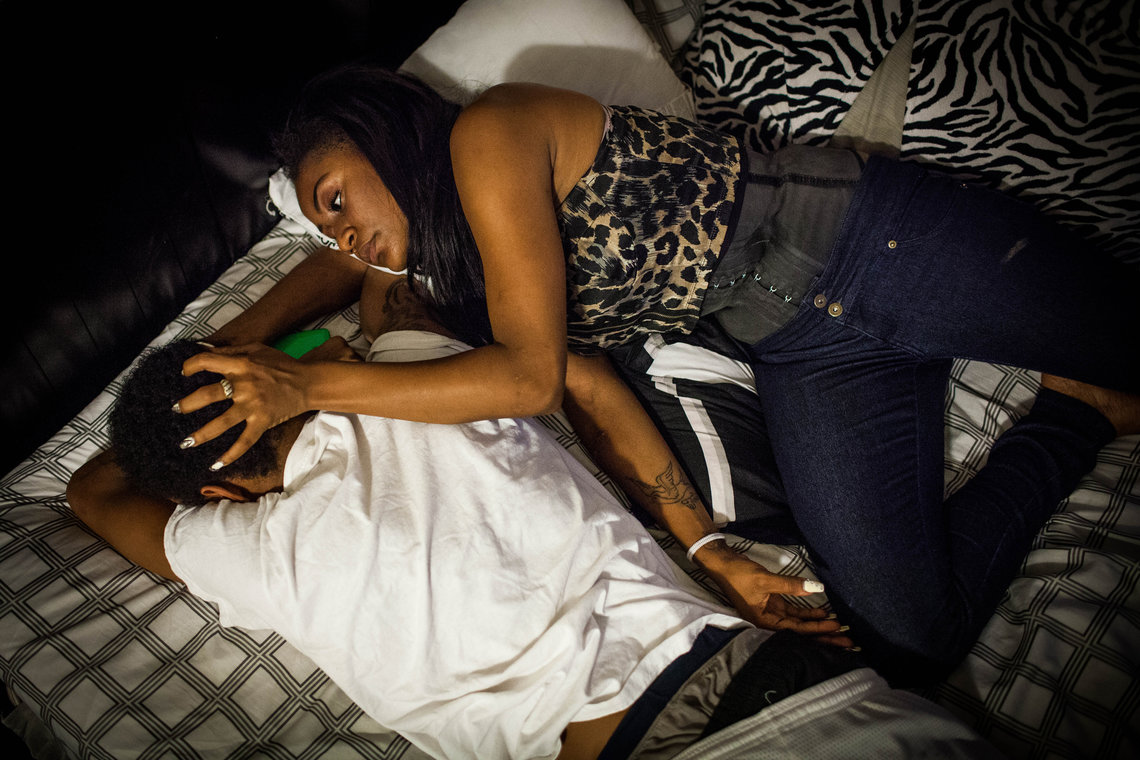 The following day, Terrick abruptly quit the training program when he could not find an unwrinkled shirt to wear to work. His then-girlfriend, Tatiana, consoled him. 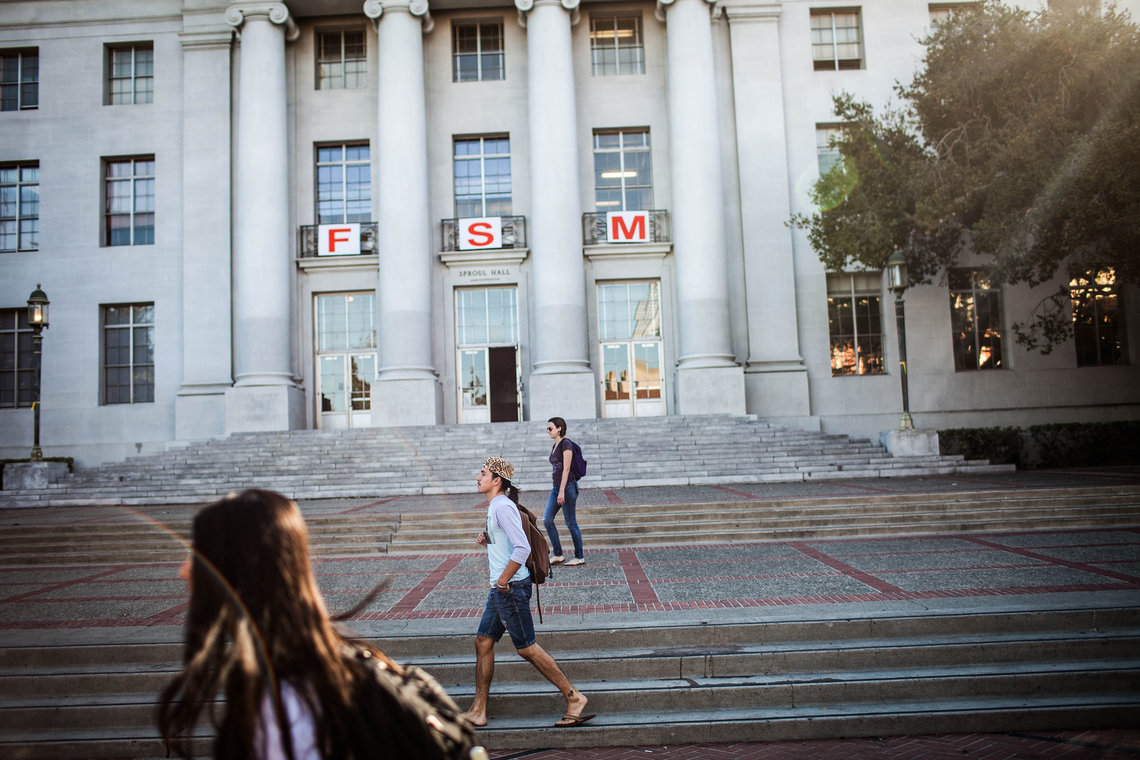 Joseph Bakhit celebrated his 18th birthday in foster care and enjoyed the financial support of the state as a student at the University of California, Berkeley. 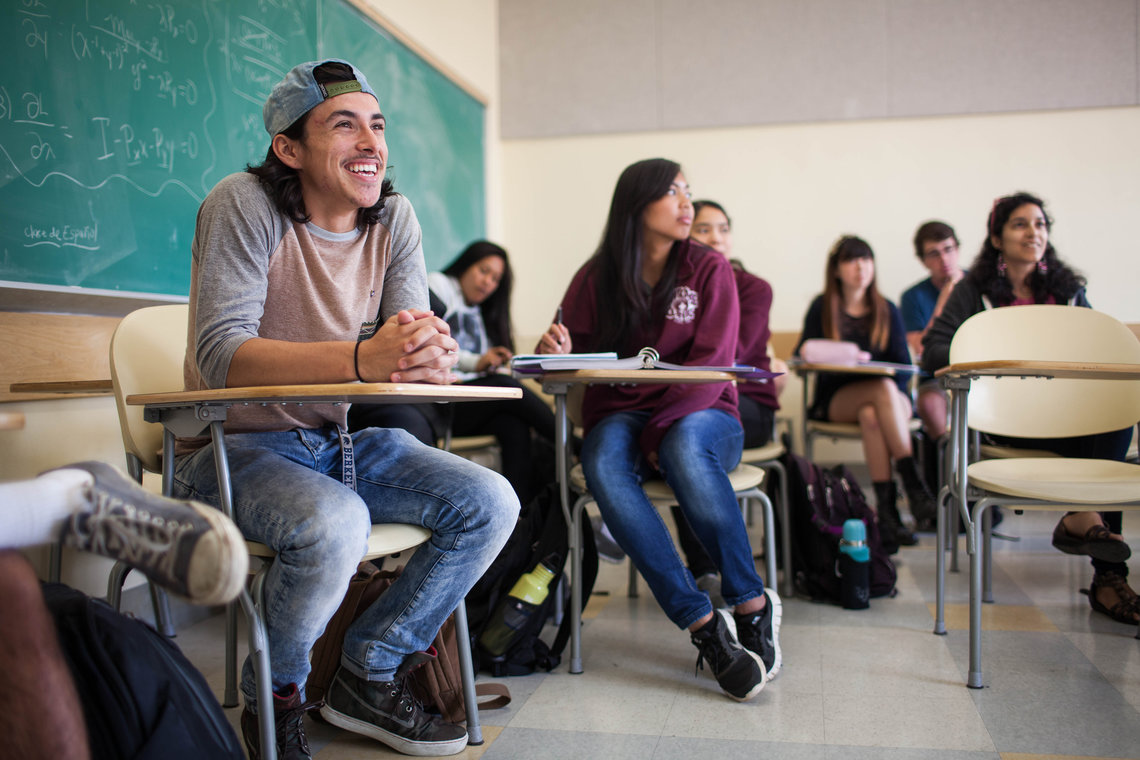 Joseph in class at Berkeley in 2014. He attended the university for five semesters and now has a full-time job. 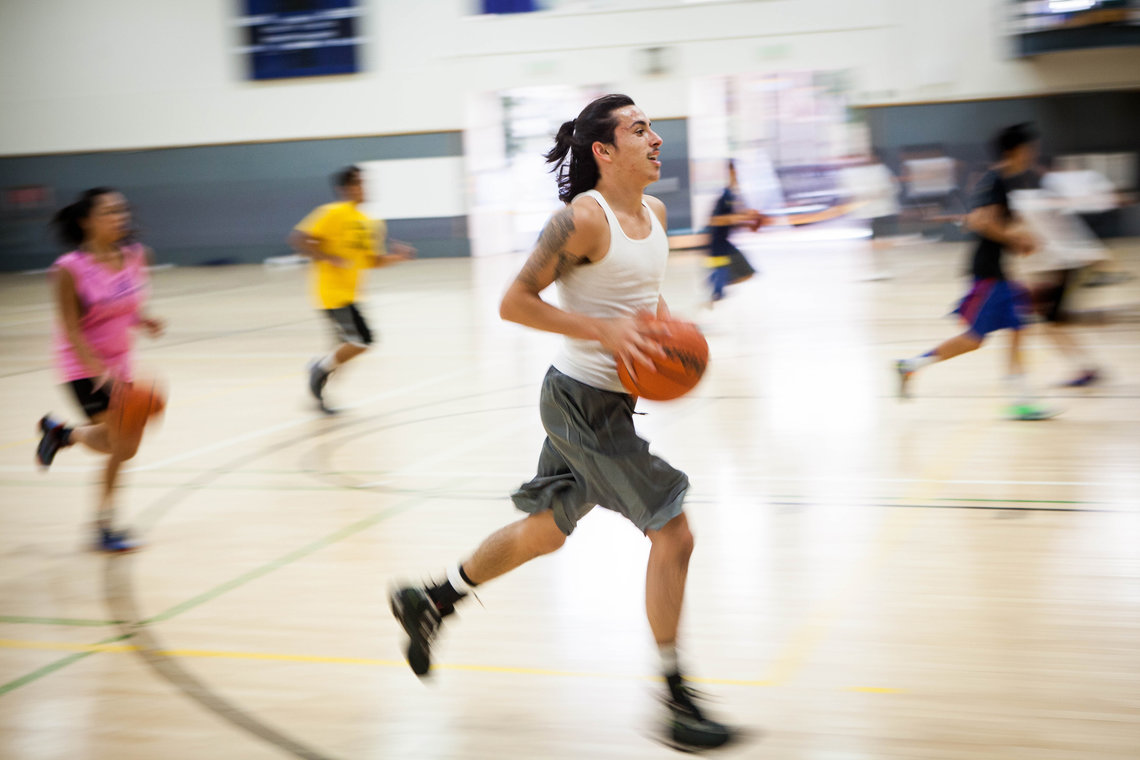 When he was a child, Joseph distracted himself from his grandmother’s abuse by focusing on school and sports. 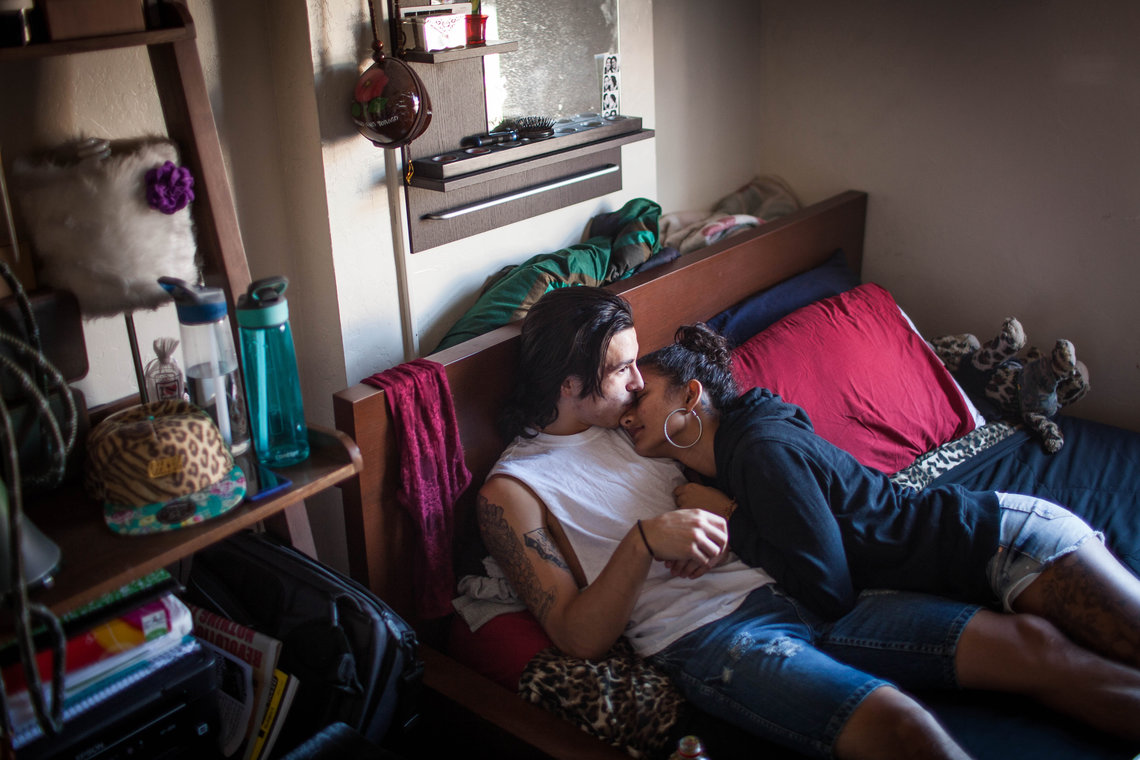 Joseph and Samantha Arjoon, now his wife, whom he met while they were both in foster care in San Diego.

“If you're in foster care, it's because you've been abused and neglected by people who [you’ve] most trusted — [your] parents, [your] families,” Beall said. “I think there's a lot of bureaucratic rules that snare foster care youth into what I call the cycle of incarceration—homelessness, addiction—and I think we decided that something needed to be done. Inherently, allowing the current practice to continue put a lot of foster kids into adult correctional facilities. So that's not what we want. That's a failure.”

Joseph, now 21, who paused his studies at Berkeley in the middle of his junior year, is currently working full time at a mortgage company. He married in February. Speaking of his high school experience, he says he felt blessed to have chosen a group home in San Diego, San Pasquale Academy, whose mission was to increase college acceptance rates among its students. “San Pasquale had a huge hand in helping me get to college.”

And he wishes that the Senate bill that Beall supports had become law in time to help Terrick. “It would have been a lot quicker and more effective if he had been able to have support out of high school. It took a lot of struggle to get to this point,” he said.

Terrick has just completed a culinary job-training program and is about to start an internship at a restaurant in San Diego. He shares a home with some roommates and his girlfriend. And he is convinced that success is in his future. “I’m definitely going to be an executive chef someday,” he said. “I don’t want to say, ‘I want to be,’ because it gives me the possibility that it might not happen.”