Life After Life Without Parole

Ronald Elston spent more than 30 years in prison, with no preparation for what he would do if he got out. 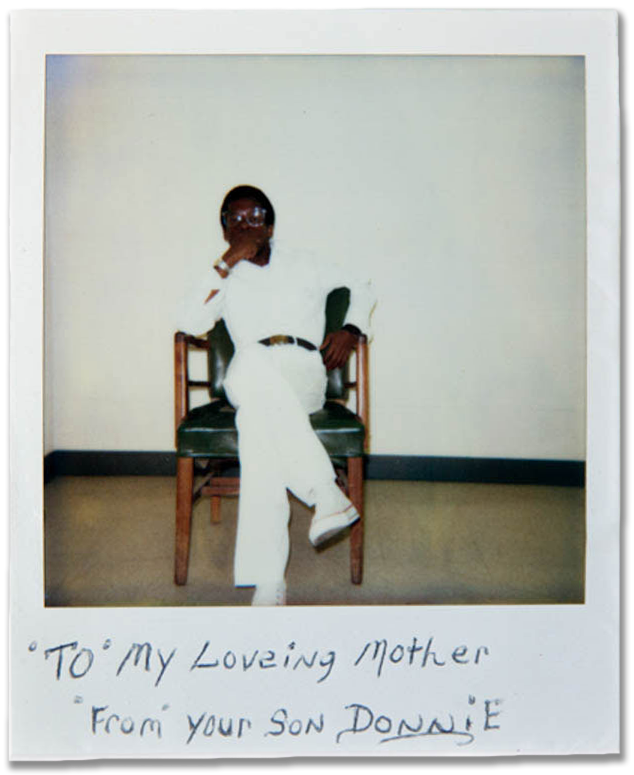 A Polaroid Ronald Elston sent to his mother in the 1990s.

Ronald Elston was 22 and fresh out of the Army when he was arrested in 1982 for robbing a deli in Anniston, Ala.

In the service, he had been trained to disarm explosives, but it’s also where he was introduced to heroin. The need to feed his habit led to the robbery, a conviction, and, under Alabama law, a mandatory sentence of life in prison without the possibility of parole. The law, the Habitual Felony Offenders Act, targets defendants with multiple convictions, and Elston’s record included convictions for burglary and forgery.

This story was published in partnership with Mother Jones.

The prosecutor told the jury, "If you don't convict this man, you may be his next victim."

That should have been the end of his story. But in 2001, the Alabama legislature amended the law to allow nonviolent defendants, like Elston, to appeal their sentences. Elston applied for resentencing in 2005 and though the state later rescinded the amendment, he and his lawyers at the Equal Justice Initiative were successful. In 2014, the court made him eligible for parole.

When he stepped out of St. Clair Correctional Facility in Springville, Ala., on Oct. 5, 2015, he was a free man for the first time in 33 years and paroled to his mother’s home in Philadelphia. Photographer Jessica Earnshaw followed him over his first year of freedom. 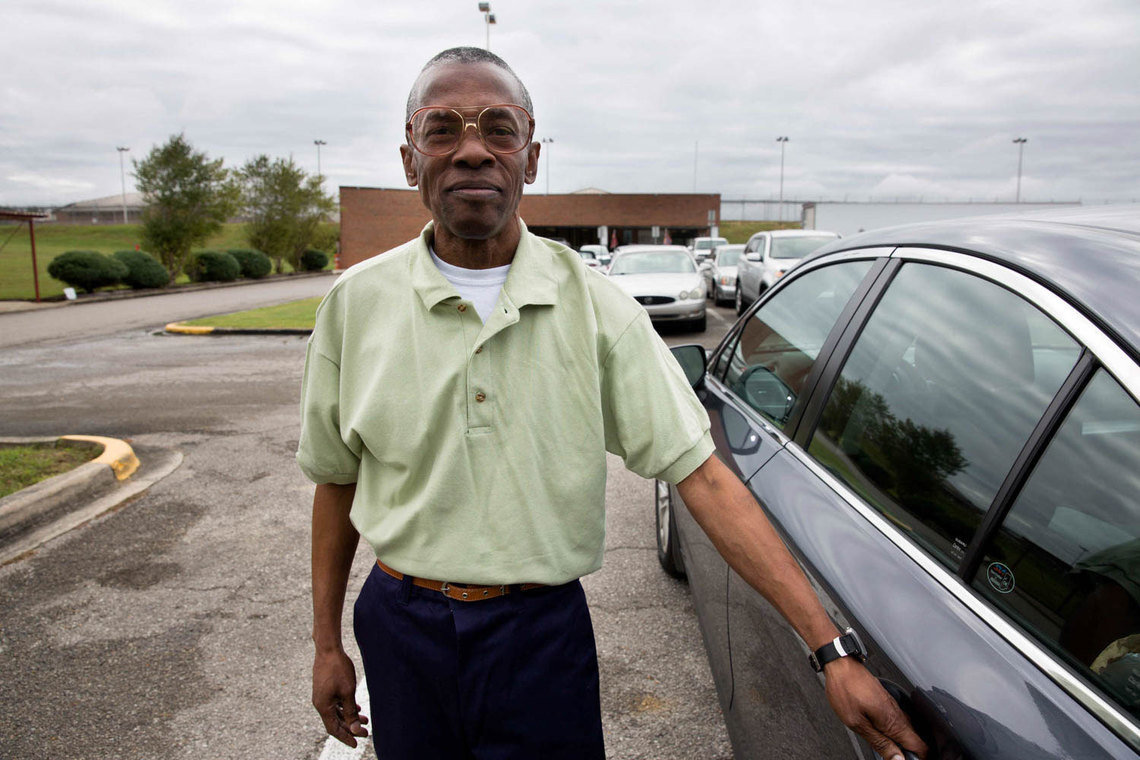 Ronald Elston, minutes after his release from St. Clair Correctional Facility in Alabama. “When I wake up,” he said, “it will be strange to me, because I'm so used to waking up in that little small cell with just a toilet and bed for so long. I'm going to think I'm dreaming or something." 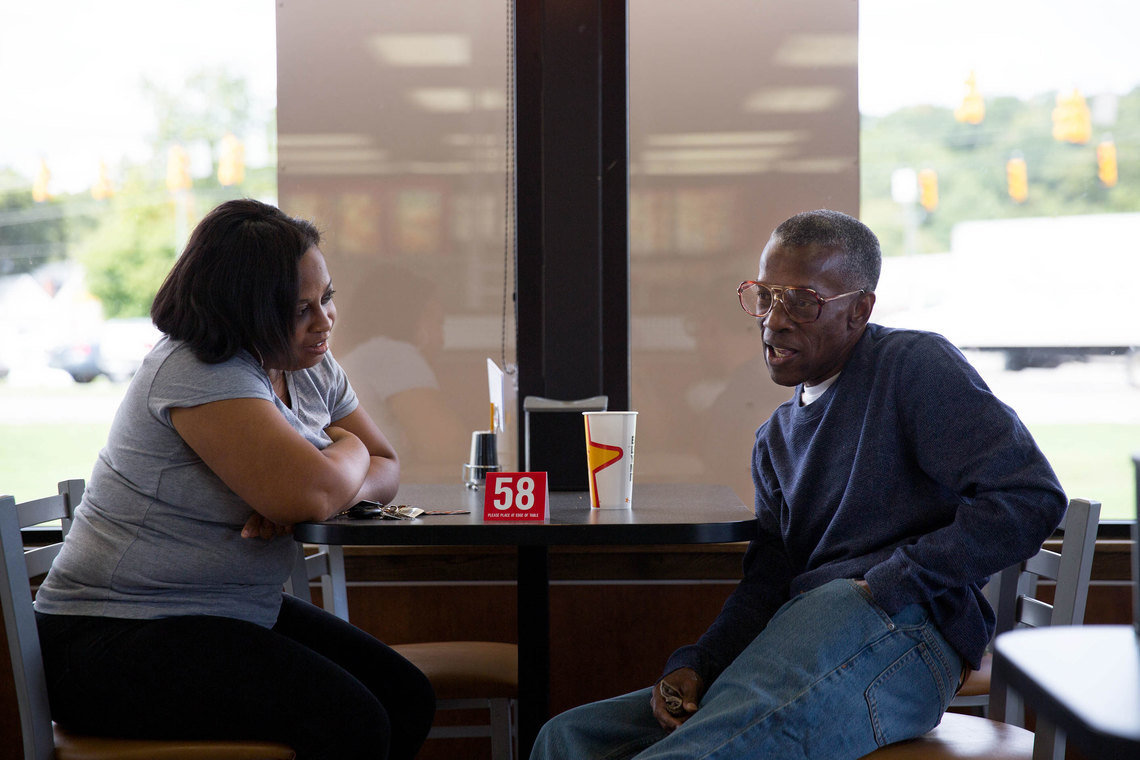 Upon his release, Elston travelled to Anniston, Ala. to see his daughter, Shamica Bradford, now 39. He had not seen her in 11 years. 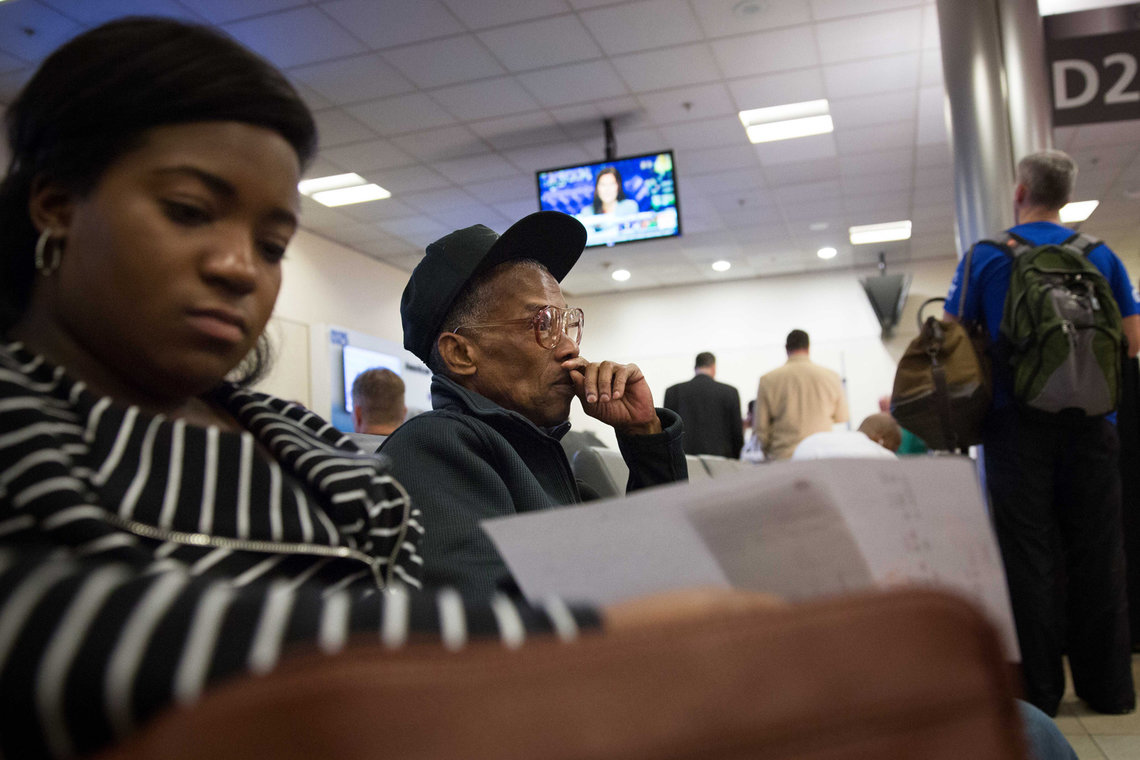 Elston sits at his gate at the Atlanta International Airport waiting for his flight to Philadelphia with his social worker. 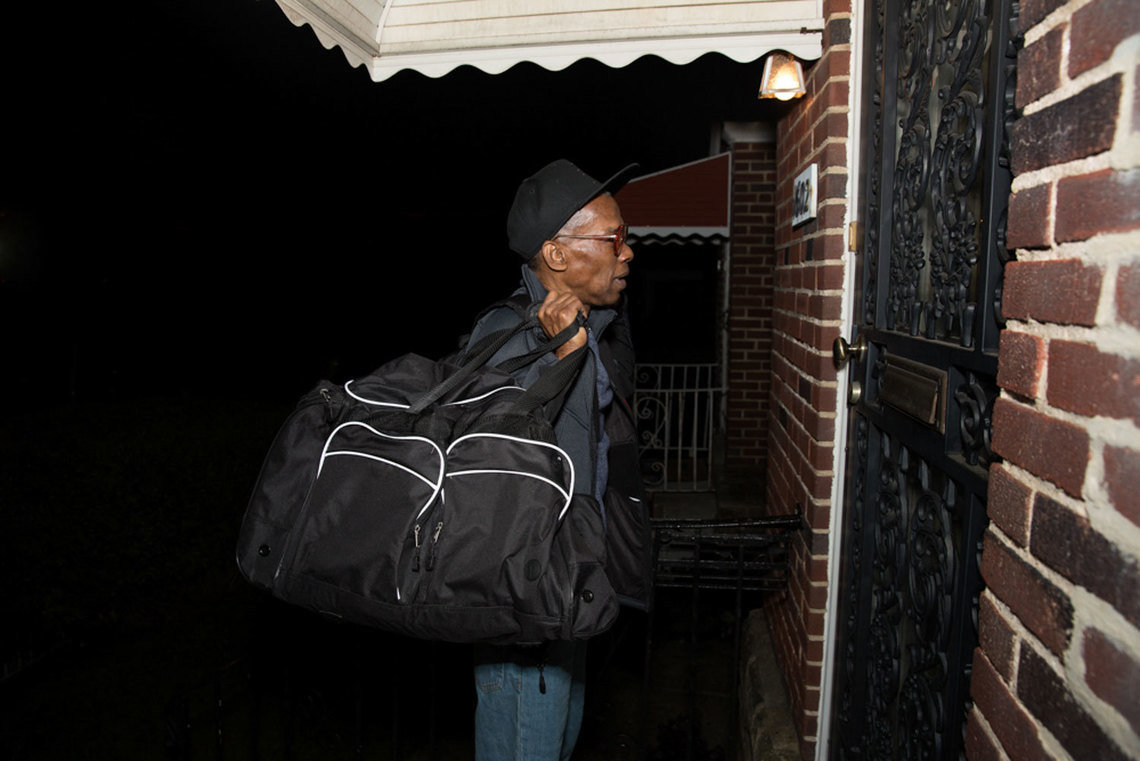 He continued on to Philadelphia to reunite with his mother, Willie Mae Dickerson, for the first time in over a decade. 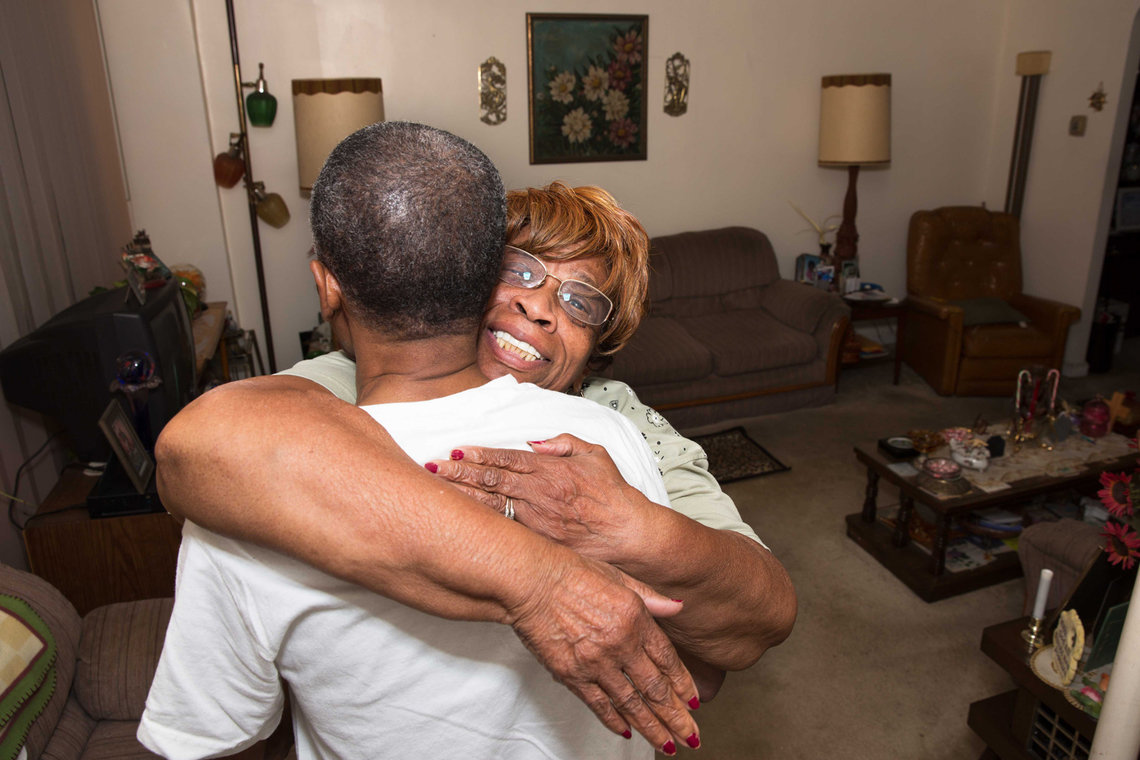 The last time he was in his mother's house, Elston had been a teenager. 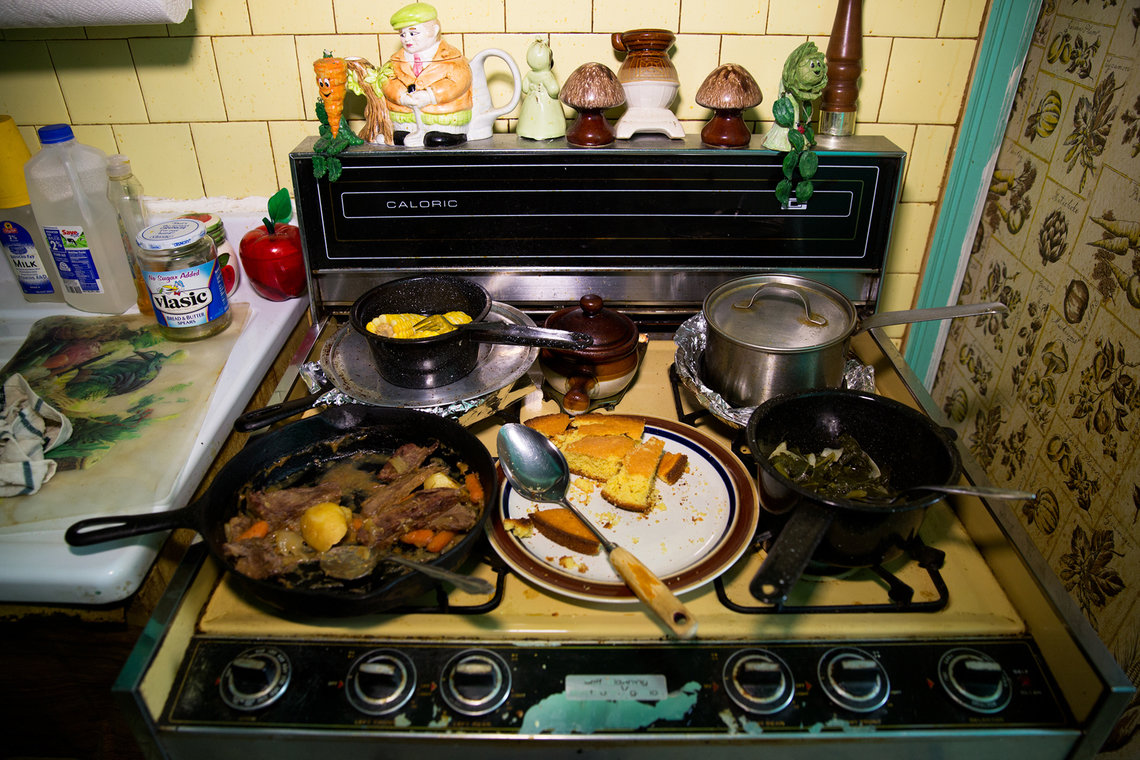 Elston’s mother had spent the day preparing a meal of roast beef, corn bread and vegetables to welcome him home, and the aroma permeated the house.

For more than three decades, Elston’s mother, Willie Mae Dickerson, wrote letters to him every week. His close-knit family—sister, nieces, nephews and his daughter—attempted to keep him connected to their lives by sending him Polaroid photographs of births, birthdays and graduations. Many of the other people in Elston’s life stopped visiting him around his 15th year in prison. He says he understood why: "They never expected me to get out.”

Because Elston was sentenced to life without parole, the prison system limited his access to training and education programs that help those with shorter sentences re-enter the job market. With menial work left as his only option, he spent eight years at the prison plant mixing chemicals and 23 years in the tool room as a clerk earning 15 cents an hour. He became the longest serving inmate employee at St. Clair Correctional Facility. 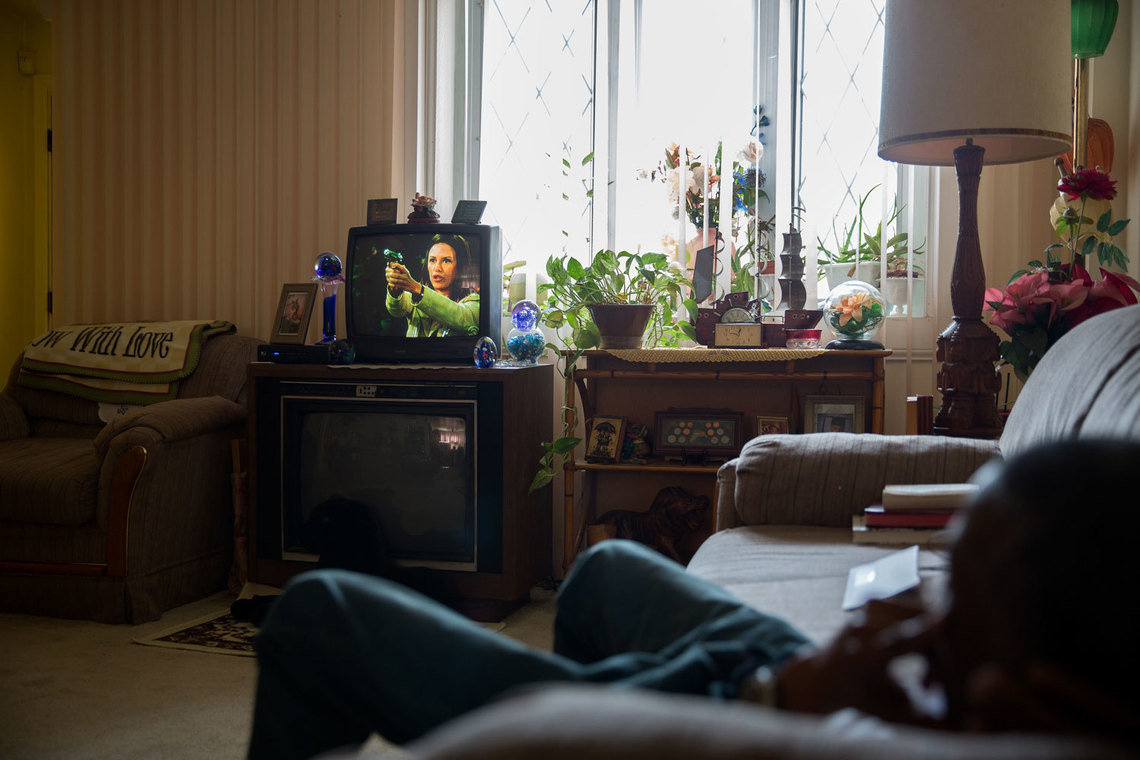 Elston watched a soap opera with his mother at her home, about a week after he was released. 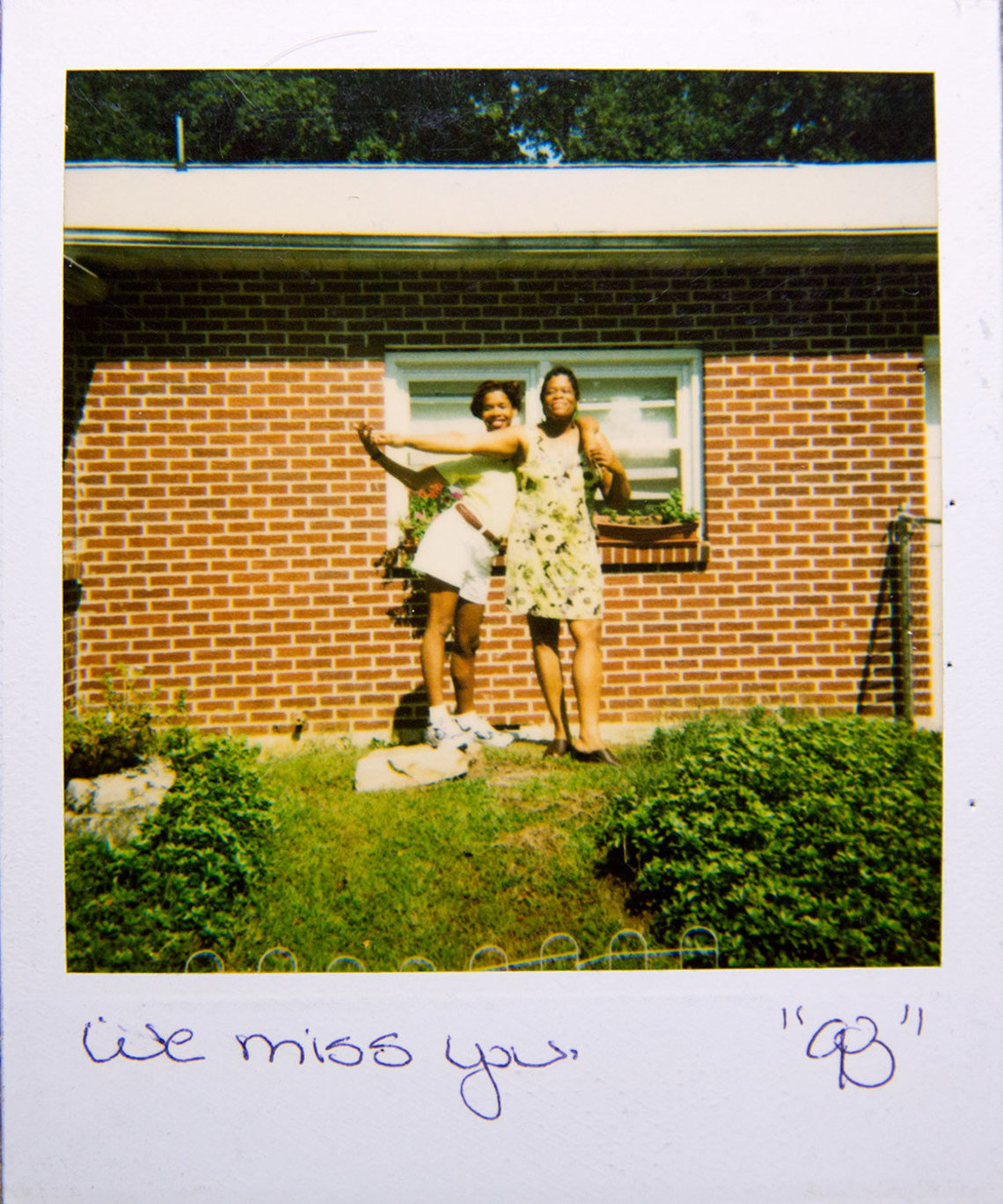 A Polaroid mailed to Ronald by his nieces while he was incarcerated in the 1990s.

It took almost a year after his release for Elston to find a job. He was finally hired at a Dunkin' Donuts outlet, but the complexity of the computerized cash registers and automated coffee makers made him anxious, and he feared being let go if he couldn’t learn to multitask. But he was also full of hope. "I have plans," he said. "This job will give me so many opportunities." He wants to save up to take a trip to Alabama when his granddaughter graduates from high school in 2018.

But after two weeks on the job, Elston was let go. He is not certain if he lost his job because he could not work fast enough during rush hours or whether he was fired when the manager learned of his record. 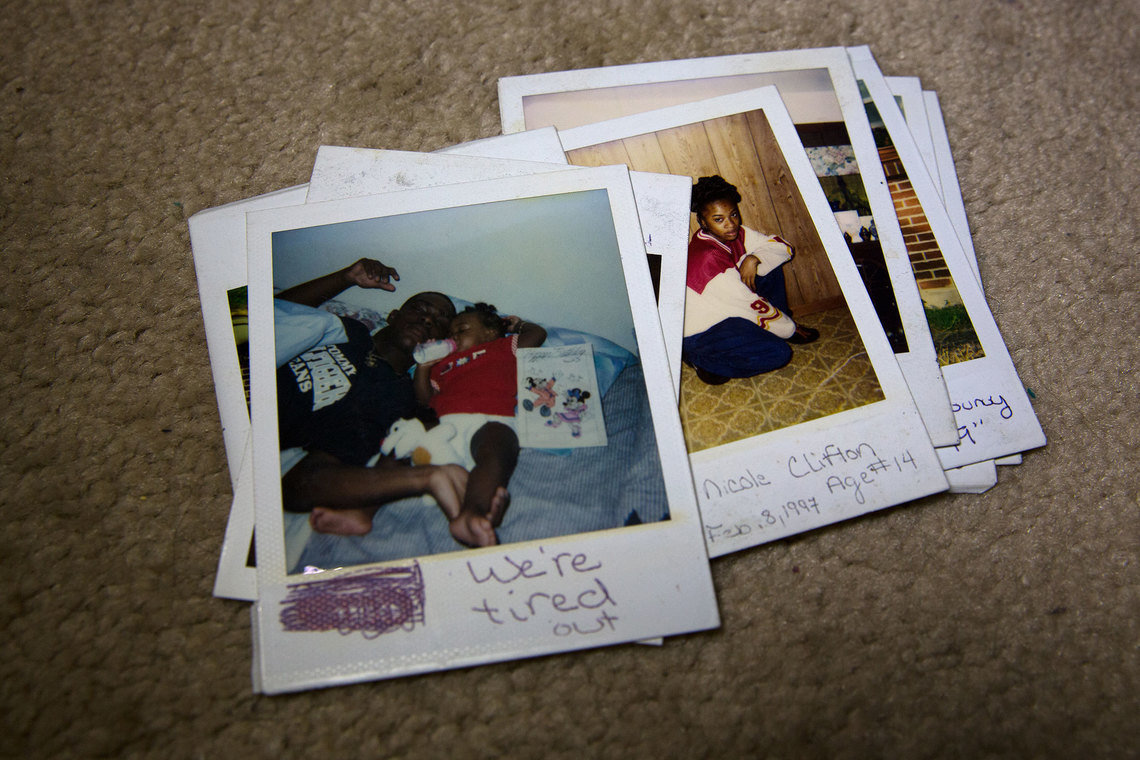 Polaroids mailed to Ronald by his nieces while he was incarcerated in the 1990s. 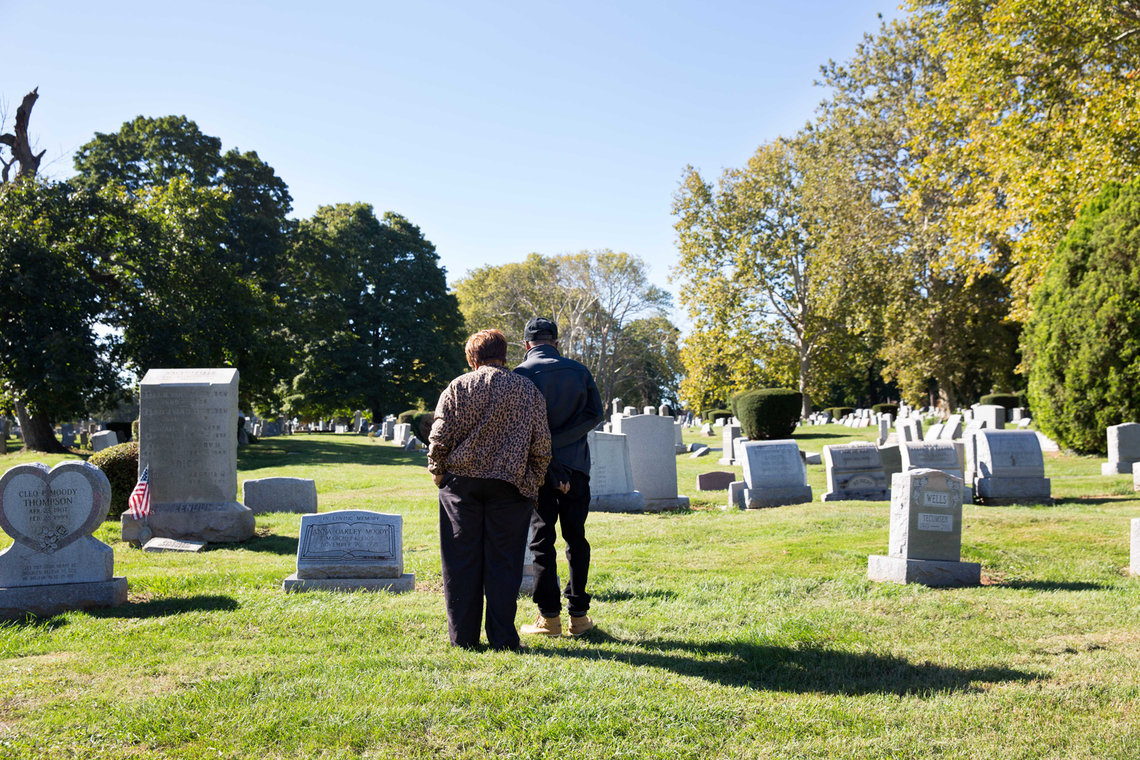 In Philadelphia, Elston and his mother visited the grave of his grandmother Sallie, who helped raise him in Alabama. Elston was heartbroken he couldn't attend her funeral in 1997. 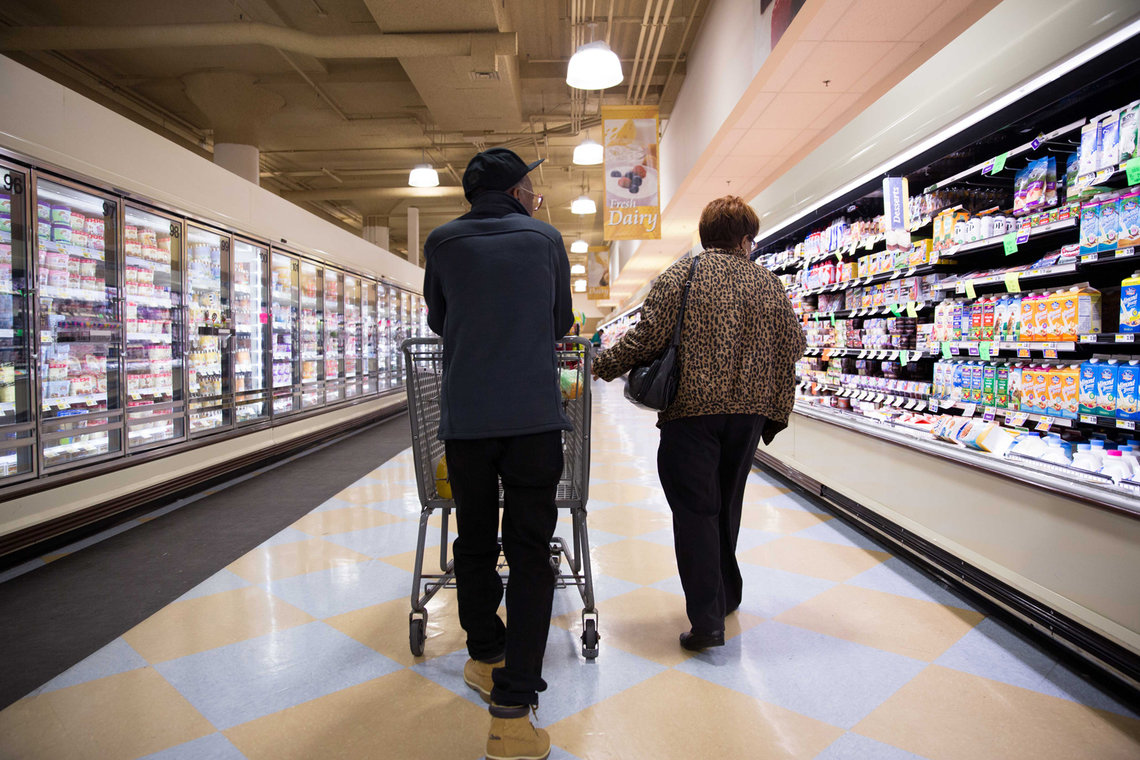 Elston and his mother go grocery shopping, a day after his release from prison. "I'm so tired of chicken and hot dogs, bologna,“ he said. “What I'd really like to eat is some glazed doughnuts. It's been so long, I love glazed doughnuts". 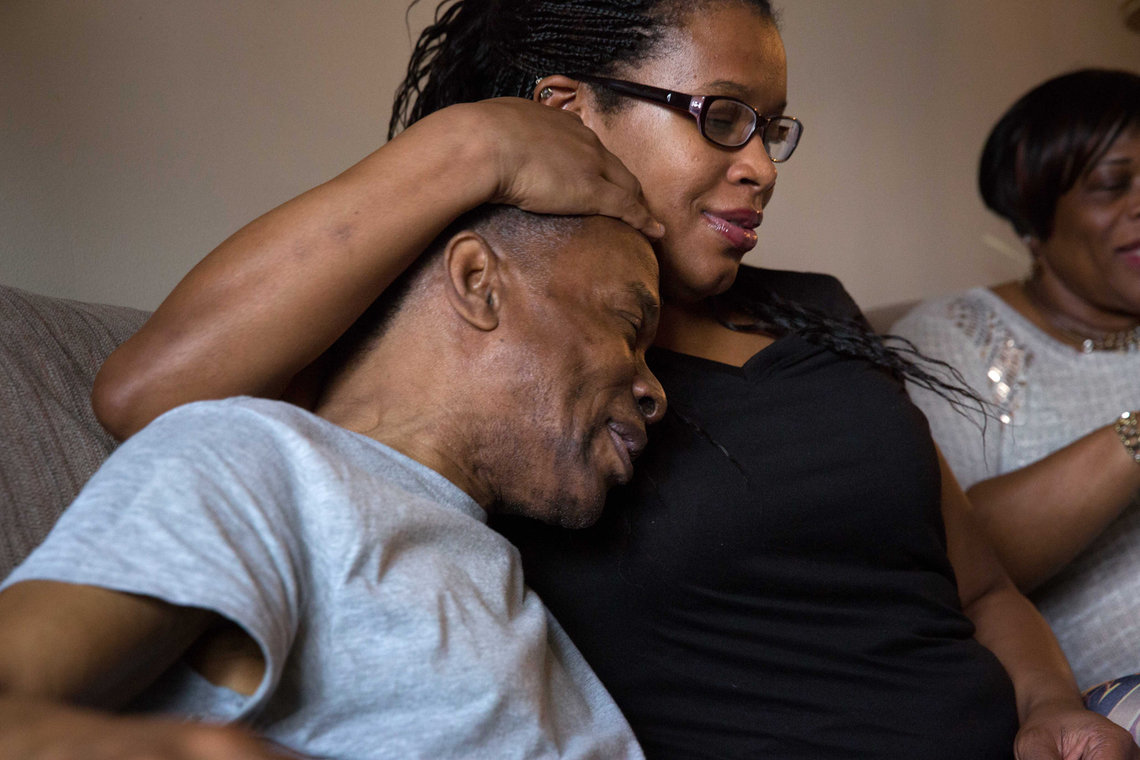 Elston with his niece Germonda Halsey in Philadelphia, at one of the many family get togethers since his release from prison. 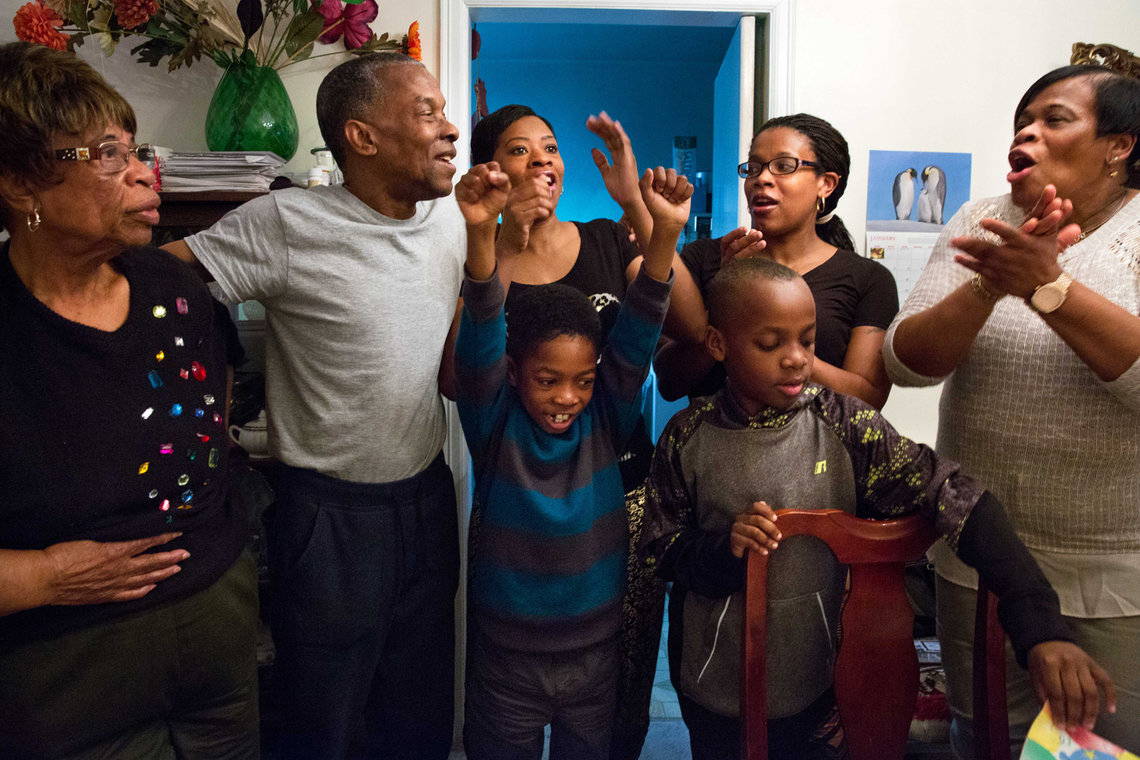 Elston celebrated Thanksgiving with his family for the first time in 33 years. 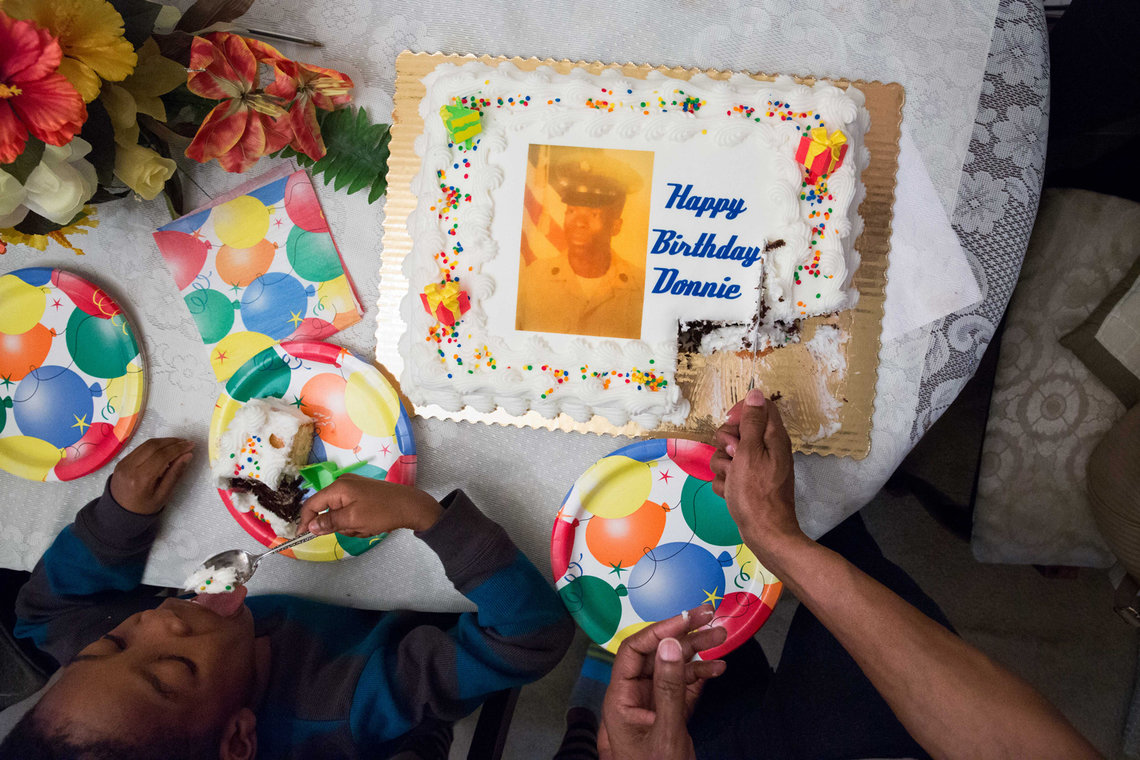 Elston cut into his 59th birthday cake, a few months after his release.

Although he was released from prison a year and half ago, Elston says he still feels trapped. In prison, he had a full-time job and a social life. Outside prison, his activities are limited. “Right now, I’m what I call ‘semi-incarcerated,’” he said. “Life isn’t offered to me right now. I’m not letting it get me down, but I know there’s more to life than going to church and going to the grocery store and going to a doctor’s appointment. I don’t want that to be my life for the rest of my life. I want to advance.”

His parole keeps him in the state of Pennsylvania, and his curfew restricts him to his mother’s house between the hours of 9 p.m. and 6 a.m. He goes twice a week to the offices of Philadelphia’s Work Force Initiative, a program funded by the Department Of Corrections to help ex-felons find work, where he learns how to use a computer. He was turned down for a janitor position, because he doesn’t have a GED.

Elston says he does not feel angry about his prison experience. As a strong Baptist, he has accepted it as his fate.

"I really think that everyone in the world should be locked up, even if it's just for a minute,’’ he said, “because it makes you appreciate freedom and the things that you have more.”

Jessica Earnshaw is a documentary photographer and filmmaker based in New York, her work focuses on criminal justice. Earnshaw has been following Ronald Elston's re-entry story since his release from prison. This work was funded through the Rita and Alex Hillman Foundation. Further images, audio and video can be seen on the project's Instagram account Aging In Prison.