A nonprofit news organization covering the U.S. criminal justice system
Local Network
Cleveland
Projects
Inside Story
News Inside
Life Inside
Mauled
The Language Project
The Record
The System
Topics
Death Penalty
Immigration
Juvenile Justice
Mental Health
Policing
Politics and Reform
Race
About
About Us
Local Network
The Marshall Project Inside
News & Awards
Impact
People
Supporters
Jobs
Newsletters
Events
Donate
Feedback? support@themarshallproject.org
Kyungmin Cho, 19, was born in South Korea but grew up in the United States. A sophomore at Temple University in Philadelphia, he was granted temporary protection from deportation through a program for young immigrants who came as children, known as DACA, and joined the U.S. Army. Now his enlistment is on hold. Kirsten Luce for The Marshall Project
Filed 10:00 p.m.
News

The Double Limbo of Dreamer-Soldiers

The Army wanted Pfc. Cho. Now it’s not so sure.

When he enlisted in the Army last year, Pfc. Kyungmin Cho thought he would be an active duty soldier by this time and a proud naturalized citizen of the United States. But despite enthusiastic praise in recent days from President Trump for the service of immigrants like him, Cho's time as a recruit has left him wondering whether the American military wants him at all.

Born in South Korea, Cho grew up in this country as an undocumented immigrant after coming here with his parents when he was seven. Now 19, he was able to join the U.S. Army after he gained temporary protection from deportation through a program for young immigrants who came as children, known as DACA.

Trump said on Sept. 5 that he is shutting down the DACA program. But he said he was giving Congress six months to replace it, and he provoked a feud in his own Republican party by negotiating with Democratic leaders on legislation to provide some permanent legal status for nearly 800,000 immigrants in the program, who call themselves Dreamers.

“Does anybody really want to throw out good, educated and accomplished young people who have jobs, some serving in the military? Really!.....” Trump asked in a tweet.

Yet while Trump is closing down DACA, his Defense Department is also cutting back a different program that has allowed Cho and other DACA holders to serve, saying the immigrant recruits present heightened security risks. So Cho’s immigration status is now doubly uncertain, and instead of the citizenship he hoped for, he could be heading toward deportation.

After President Obama used his executive powers in 2012 to create the DACA program (its full name is Deferred Action for Childhood Arrivals), some young immigrants who received its two-year deferrals lobbied to enlist in the military. In general, immigrants must be citizens or legal permanent residents with green cards to be eligible to enlist. But in 2014, Pentagon officials opened a narrow channel for DACA holders, through an existing program for immigrants with no permanent status who had special language and medical skills.

That program, known as MAVNI (initials for another tongue-twisting name, Military Accession Vital to National Interest), accepts immigrants who speak one or more of 44 languages deemed useful for military operations or who have medical skills needed to fill gaps. The program includes a powerful magnet for immigrants: a fast track to citizenship that starts as soon as a recruit enters basic training.

Fewer than 900 DACA immigrants are serving or have signed contracts to serve through the MAVNI program, Pentagon officials said. About 360 of them are in the same precarious position as Cho: they’ve been inducted but have not yet started basic training.

From its earliest days in 2008, the MAVNI program has been caught in a tug-of-war between supportive recruitment commanders, who saw the exceptionally high education and skill levels of the immigrants, and doubting Pentagon brass who thought it could be an entry point for foreign spies or terrorists.

Kyungmin Cho at his high school graduation where he spoke as senior class president.

Now Cho is snagged in that dispute. He grew up in a flourishing South Korean community in Palisades Park, N.J. Like many undocumented youths, he only made the jolting discovery of his lack of legal status when he was in high school, thinking about applying for college and looking for a social security number he didn’t have. "The whole time when I was growing up I thought I had a green card,” Cho said.

He took his undocumented status as a spur to work harder so he could win merit-based scholarships for college. In high school, he was a high honors student, competed in track and basketball and spoke at his graduation as senior class president.

“I think I had the cleanest record ever as a student there,” Cho said. “I never did get into any trouble.” In 2012, he was among the first cohort of young immigrants to receive DACA two-year deferrals of deportation. He has renewed twice, most recently in February.

He won a generous scholarship to Temple University in Philadelphia. But he decided to enlist in the MAVNI program in June 2016 to secure his citizenship and prove his bona fides as an American. He was accepted as a native speaker of South Korean – the language of the country where more than 23,000 American troops are stationed and similar to the version spoken in North Korea, a nation threatening nuclear warfare against the United States.

Cho was told he would report to basic training in March. But he has yet to be called up.

He is hearing loud and clear a message of suspicion from both immigration programs where he is enrolled. “It’s an odd feeling,” he said, “when you stand up for years and do the Pledge of Allegiance and at the last minute they tell you you’re not a citizen and you don’t belong here.”

Last year, the Pentagon discovered that some MAVNI recruits – none of them with DACA – had obtained student visas through a fake university set up by federal immigration investigators in a sting operation. In September 2016, the Pentagon stopped taking new recruits and issued instructions mandating a total of four rounds of security checks for MAVNI soldiers, including counterintelligence screenings usually required for high levels of clearance. 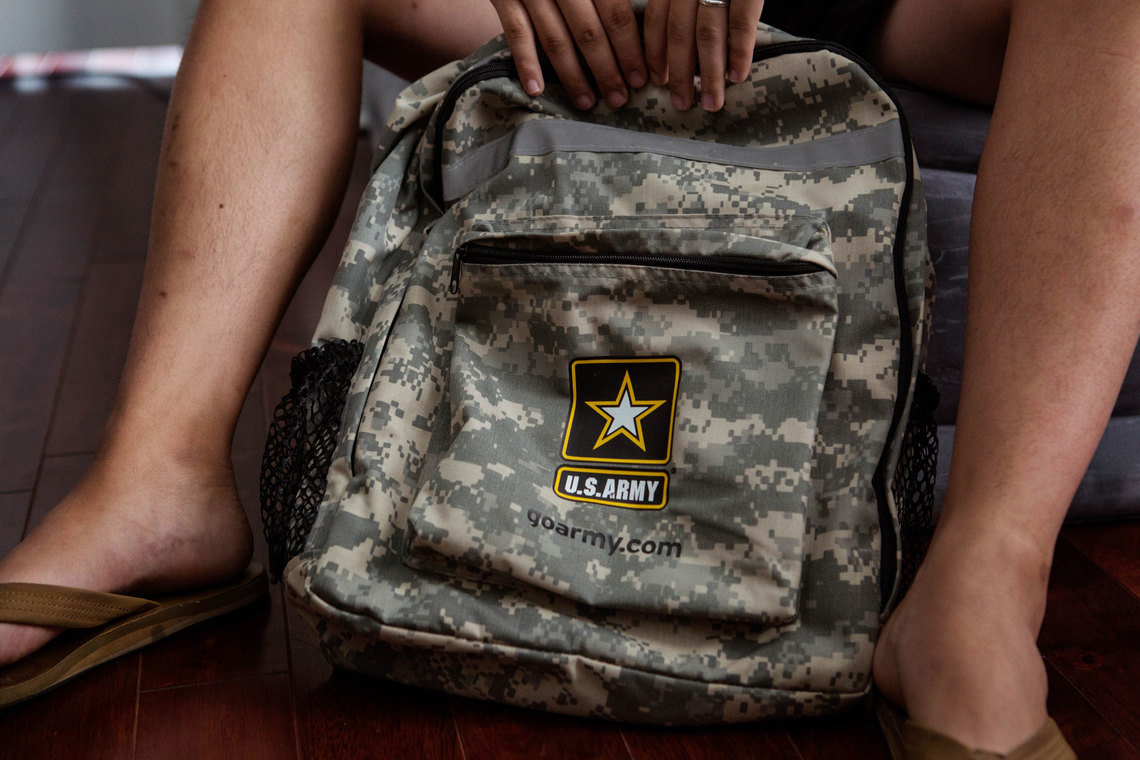 Cho has been issued a backpack by the Army but so far no uniform. After enlisting in June 2016, he is still waiting for word from the Army on when he will begin basic training. He is among about 360 DACA holders who enlisted and are now caught in delays.

In April, the Trump administration doubled down on that policy, insisting in a memo that the added scrutiny was “critical to the sustainment of the MAVNI program and the welfare of its participants.” Of about 10,000 soldiers recruited to date through MAVNI, about 4000 have been held back from basic training for screenings, Pentagon officials said. An internal memo published by The Washington Post in June outlined a Defense Department plan to cancel more than 1000 MAVNI recruiting contracts. Last week some contracts were cancelled.

“There is no question it is pretty much a purgatory at this point,” said Cesar Vargas, an immigrant youth leader and lawyer who has long advocated for undocumented young people to be able to serve in the armed forces.

The Pentagon explained its reasoning in a lawsuit filed in February by MAVNI soldiers who had become U.S. citizens, challenging the added checks. MAVNI recruits require intense scrutiny, the Pentagon said, because of a lack of information about them “due to the fact that, as a group, they have spent significant periods of their lives outside of the United States and have had extensive contacts with foreign persons.”

The nineteen soldiers who sued claimed the Pentagon’s arguments show it is singling them out for distrust solely because they are immigrants. The case is ongoing.

In any event the Pentagon’s concerns would not seem to apply to DACA immigrants, who have lived in this country since they were children and already passed some background checks to qualify for deferrals. But Cho, now a sophomore at Temple and trying to concentrate on his studies, is waiting for word that could come at any time from his Army unit in Queens, New York to schedule a battery of screenings.

“I currently don’t even know what I am in the Army,” Cho said. He has been issued a backpack but no uniform. His DACA deferral is valid until February 2019. But other recruits have permits expiring soon after a March 5, 2018 deadline set by the Trump administration, which can’t be renewed. If they never become citizens and are discharged, all the DACA holders would eventually lose protections and become deportable.

A Defense spokesman, Lt. Col. Paul Haverstick, said the Pentagon has not yet decided any policy changes based on the DACA shutdown. He said, "We know this involves real people, who are in limbo while they await resolution.”

In a surge of support for DACA immigrants after Trump’s shutdown, Democratic and some Republican lawmakers have called for a permanent fix to allow the young people to enlist. Senators Richard Durbin, a Democrat from Illinois, and Lindsey Graham, a Republican from South Carolina, have offered a bill with incentives for them to sign up. Durbin and Senator Kamala Harris, a Democrat from California, added an amendment to the defense authorization bill to prevent the military from dismissing MAVNI recruits because of delays with background checks.

Cho is frustrated and confused by the results of his eagerness to serve. “We think of America as our country,” he said, “but the country does not think of us as Americans.”