Another Hurdle For Former Inmates: Their Teeth

For many recently-released prisoners, severe dental issues are just one more barrier to restarting their lives.

Kara Burns walked out of federal prison in 2013 with little more than a bus ticket and a few hundred dollars she’d managed to save inside. She needed to start job-hunting, but like many formerly incarcerated people, she had a problem that made rebuilding her life even more stressful: Bad teeth.

Burns’ dental problems started long before her incarceration. For years, she used methamphetamine, which is known to cause devastating tooth damage and gum disease. While in prison for two and a half years on a drug charge, she saw a dentist twice, she said. By the time she was released, she was missing multiple teeth and had several other decaying ones covered by sterling silver crowns.

“I have all these barriers—barrier after barrier after barrier—a criminal history, my home address is a halfway house, and I don’t have any money to buy clothing so that I can present myself professionally. And then also my teeth are rotting,” said Burns, 40, who lives in Denver. 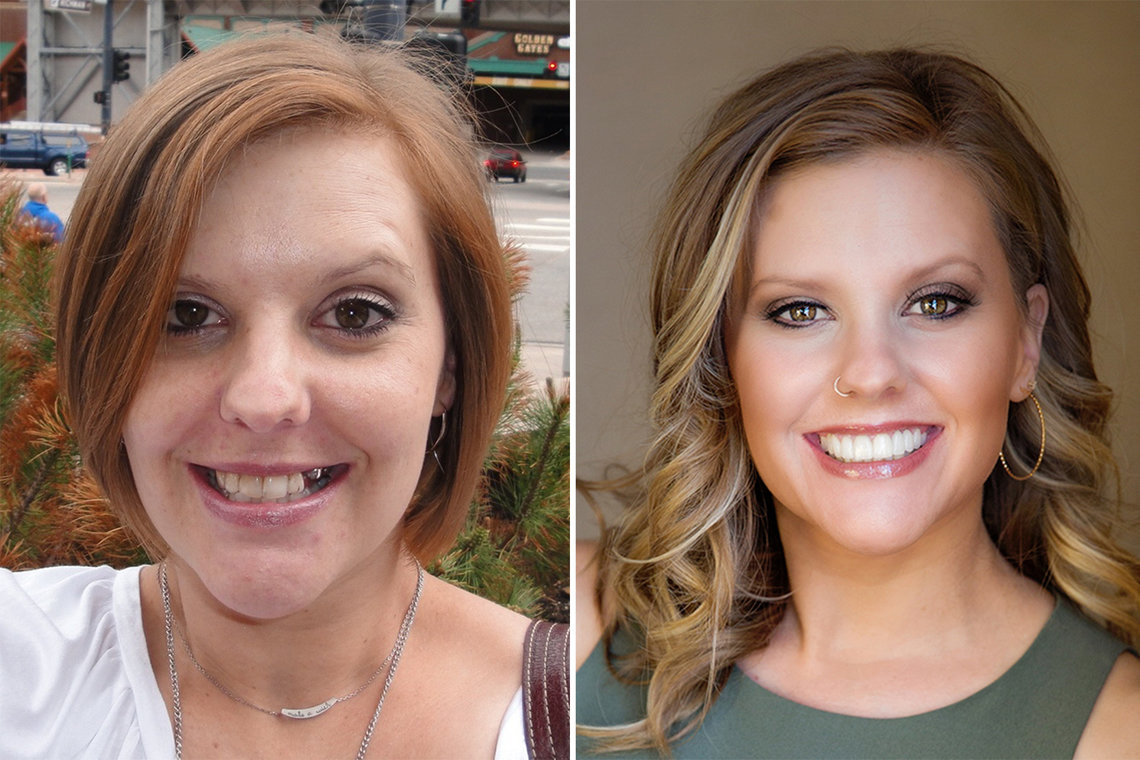 When Kara Burns was released from prison, she was missing multiple teeth and had several other decaying ones. Eventually, a dentist fixed her teeth free of charge.

It’s not uncommon in America—whether you’ve been incarcerated or not—to lack access to a dentist. In 2016, 74 million Americans had no dental coverage, according to the National Association of Dental Plans. But poor oral health is a particularly nagging problem for many formerly incarcerated people, experts say. For recently released inmates already carrying the social burden of a criminal record, dental problems can exacerbate the daunting challenges involved with returning home, such as finding employment and housing.

Severe teeth and gum problems can cause debilitating pain and are associated with a host of other illnesses, including cancer and cardiovascular disease. They also carry a heavy stigma. Lisa Simon, a fellow at the Harvard School of Dental Medicine who treats inmates at the Nashua Street Jail in Boston, says that’s especially true for missing front teeth. “People judge you if you don’t have them,” she said. “It can be very difficult or even embarrassing to try and seek employment or just function in the world.”

Even before their incarceration, prisoners are likely to have unmet dental needs, research shows. While in prison, they have a constitutional right to dental care, but the courts have offered little guidance on the services that institutions must provide. If a tooth or gum problem is causing more than minimal pain, facilities are required to treat it, said David Fathi, director of the ACLU National Prison Project. “Even a few days of untreated dental pain is not allowed.”

Beyond that, guidelines vary by agency. In many facilities, a few clinicians serve the entire inmate population, often resulting in long waits for routine cleanings. In March 2017, an inspector general report revealed that one out of four inmates at a federal prison in California was on a waitlist for dental care; some waited for as long as eight years.

Even when inmates do get care, many complain that prison dentists choose to pull their damaged teeth rather than repair them with restorative procedures such as crowns and bridges. The Florida Department of Corrections dental policy, for example, says that crowns, bridges, and implants are only provided under exceptional circumstances; it considers those procedures to be elective dental care, an agency spokesman said.

Cost is likely a factor: Pulling a tooth can run less than $200, while more complex restorative procedures can cost thousands, recent data from the American Dental Association shows.

Some former inmates say the dental care they received in prison brought consequences that lingered after their release.

When the cap on Henri Siron’s front tooth cracked in a Colorado state prison, the dentist there said her only option was to pull it, she said. Siron refused, believing that a new cap would fix the issue. “I was very self-conscious, I wouldn’t smile,” she said. “I always had my hand over my mouth.”

Once Siron was released, her still-cracked tooth made job interviews especially stressful. “I’d find my super glue, and I’d try to glue [the old cap] in, hoping that it would stick long enough while I was talking to somebody,” she said. It took over a year to pull together the money for a new cap, even with Medicaid, the state-funded insurance program. Eventually she was able to secure a steady job doing custodial work in the evenings.

Kristy Pomeroy, who until recently ran a program for formerly incarcerated people with The Next Door, a Nashville-based Christian nonprofit organization, said that her clients also faced dental-related anxieties during job interviews. Damaged or missing teeth undermined their confidence, she said. It didn’t help that many employers didn’t want to hire them for positions that required working with the public. “It was like, ‘I need you to work here, but I can’t put you up front,’” she said.

Kristi Hornick, who until recently ran the Reentry Initiative, a program that provides housing and support for formerly incarcerated women in Colorado, tells a similar story about her clients. “If they don’t carry self-confidence in their teeth, it’s very difficult for them to have the confidence of ‘I deserve this job,’” she said. After their dental issues have been addressed, “it’s like they’re a new person. They’ve discovered a new hope,” she said.

That was the case for Jenny Chestnut, a former drug user who spent two years incarcerated in Colorado for theft. She lost several teeth in prison because “they didn’t want to fix them,” she said. (In an emailed statement, a spokesperson from the Colorado Department of Corrections said that while restorative procedures are the treatment of choice for the agency’s dentists, if a tooth is too decayed or fractured, extraction is the only option.)

Chestnut’s father mentioned her predicament to his dentist, who was so moved that he offered to do the necessary work for free. With the dentist’s help, Chestnut got dentures. “It’s hard, it’s lonely, and man, you cry a lot, but it’s possible,” she said of getting re-established after returning home from prison. “If people had good dental care then it would be a little bit easier.” 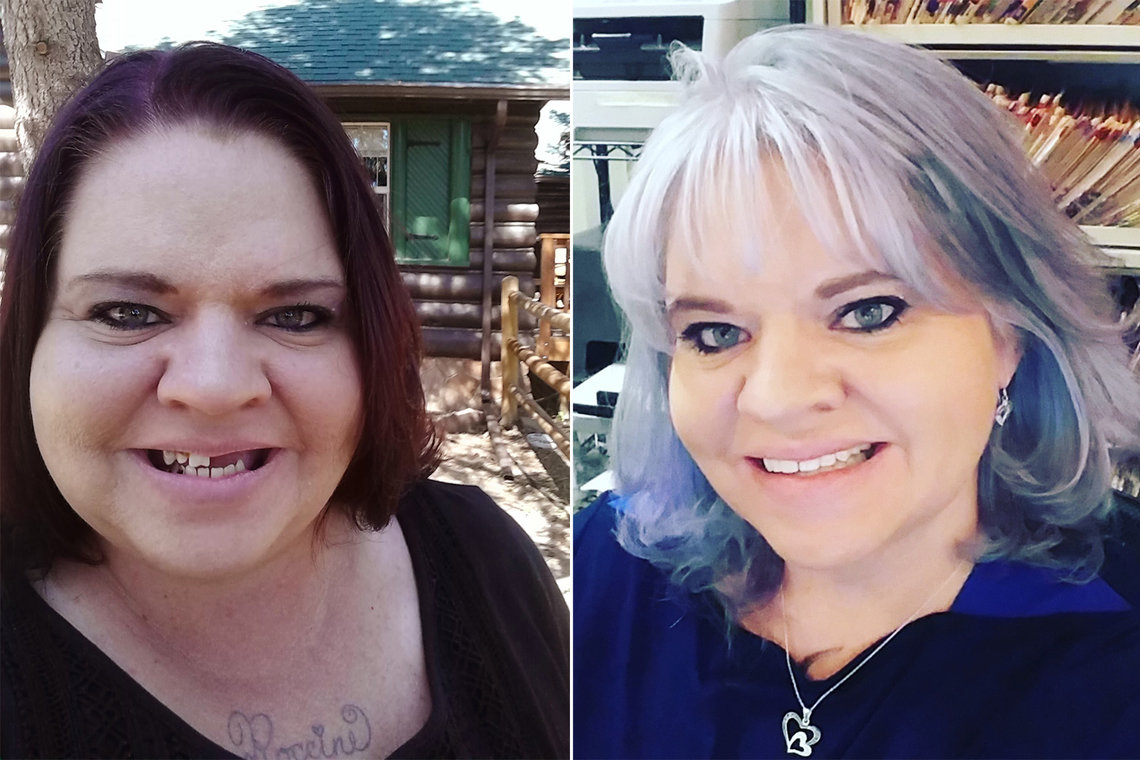 Jenny Chestnut lost several teeth in prison but was not able to get dentures until after she was released.

But for many former prisoners, obtaining costly dental work may seem out of reach. “When people are coming out their physical and dental health needs are not necessarily their top priority,” Pomeroy said. “They’re worried to death about keeping a shelter over their head, being in compliance with probation and parole and working a job.”

Some may be lucky enough to secure dental coverage through a job with health benefits. But even for the insured, tackling complex dental problems can be prohibitively expensive.

Other former inmates turn to low-cost clinics, such as those associated with local dental schools. That was the case for Albert Pugh, who lost several teeth and was wearing an ill-fitting partial denture by the time he left the Alabama prison system after three decades. After Pugh started working for Foundry Ministries, a Bessemer, Alabama-based Christian social services organization, he was able to get several implants and a new partial denture made. He was referred to a low-cost clinic affiliated with his employer. The entire process took a little more than a year, with Pugh paying some each month until the bill was paid.

“When you get your teeth back, you can smile with confidence,” he said. Pugh, who now works as the director of a Foundry program for former inmates, said that at least a third of his clients have significant dental needs, and he refers them to the same clinic that helped him.

For Kara Burns, getting her missing and damaged teeth repaired took the generosity of a good Samaritan. In the first week after her release, Burns got connected with the Denver chapter of Dress for Success, a nonprofit that provides office attire and other support for low-income women. At an event hosted by the group, which gave her resume help and clothes for interviews, Burns met a dentist who offered to perform the extensive dental work she needed free of charge. That required root canals and crowns for nearly every tooth in her mouth.

“Once my teeth were fixed my entire world was opened up,” said Burns, who is currently working as an instructor and catering manager at a nonprofit that provides culinary job training. “It’s changed everything for me.”