A Father and Child Disunion

One migrant’s encounter with “zero tolerance." 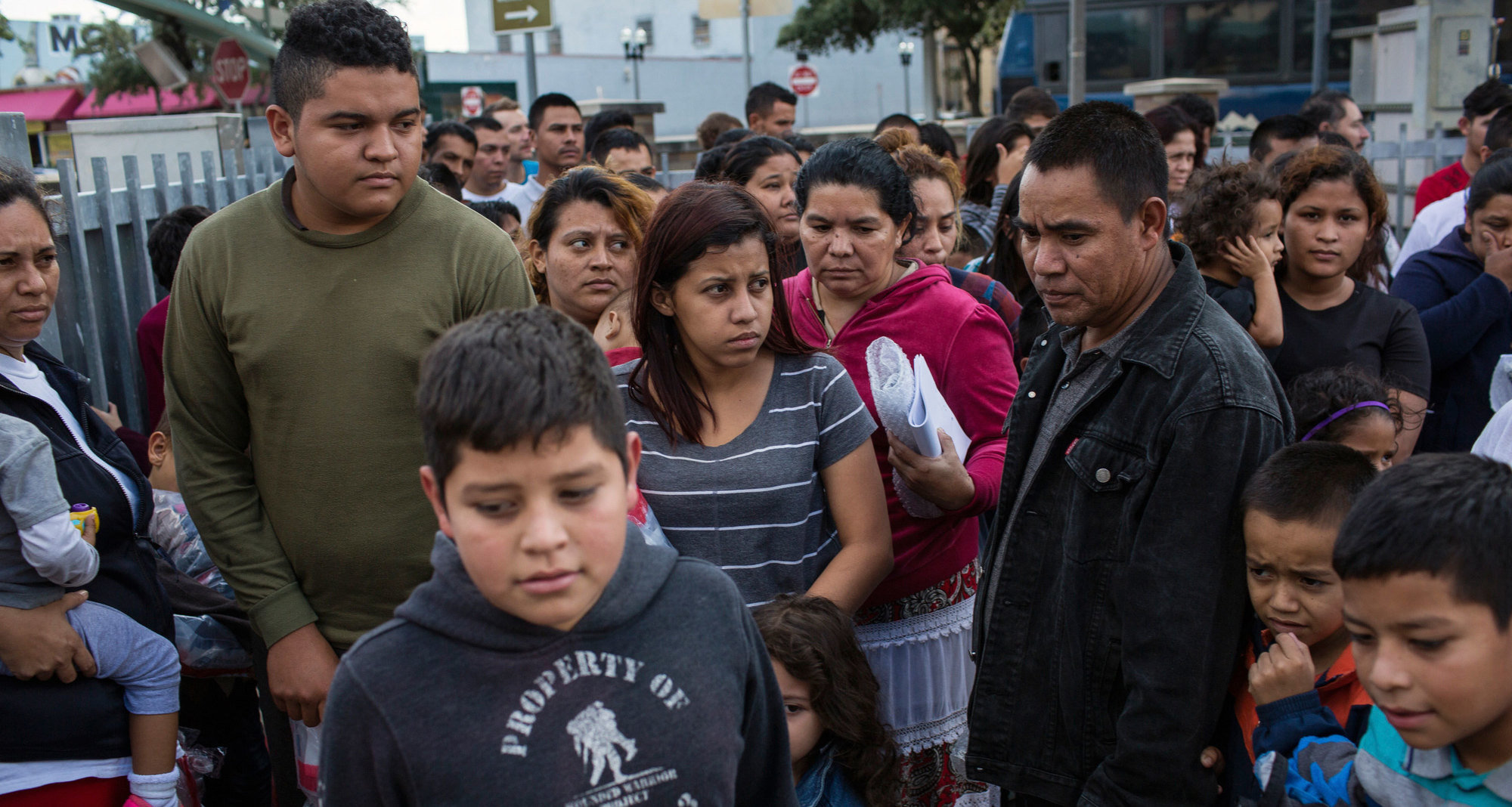 Recent undocumented border crossers arrive at a bus station in McAllen, Texas, after they were processed and released by U.S. Customs and Border Protection. Tamir Kalifa/The New York Times, via Redux
By Julia Preston

The first day after they were caught hiding in tall grass near the Rio Grande river, before they were separated, the Honduran father and his 7-year-old son were detained in an air-conditioned Border Patrol station. After a night in the thick heat of borderlands summer, the boy was shivering, and he asked his father insistently to hold him to keep him warm.

This story was published in partnership with Politico.

That was what the father, Mauricio Posadas Andrade, recalled in the days after border officers pried his son away from him on June 12, and after he was confined with dozens of other migrant parents in a detention center near Brownsville, Texas. For 10 days he had no communication with his namesake son, Mauricio, and no idea where he was. Seized with insomnia, Posadas imagined that the boy had been taken back to the Border Patrol “icebox” and was freezing there without him.

The relief was powerful 10 days later when he was summoned by a guard to a phone and heard his son’s small voice. Now at least he knows the boy is safe, in a climate-controlled federal children’s shelter in Phoenix.

What Posadas doesn’t know is when he will see his son again. The detention center, benignly named the Port Isabel Service Processing Center, has been designated by the Department of Homeland Security as a hub for migrant parents in the whipsawing crisis created by the Trump Administration’s zero tolerance policy for illegal border crossers. According to a fact sheet DHS issued on June 23, the center is “intended to serve the unique needs” of detained parents whose children were taken from them.

But if the authorities here have a plan for reuniting parents and children, they have not shared it with Posadas or at least 150 other recently separated, very agitated parents detained here.

“My life has not been an easy one,” Posadas, a construction worker from a farming province in Honduras, said in an interview on Wednesday in a small cinderblock visitation room inside the detention center, with guards observing through glass on all sides. “But nothing was as hard as this,” he said, allowing himself, despite the eyes on him, to show some of the emotion he had contained since arriving at the center. “They reached in and tore out a piece of my heart.”

Mauricio Posadas Andrade is detained at Port Isabel Detention Center, near Brownsville, Texas. He was separated from his son on June 12.

In a vacuum of information, Posadas is weighing choices, none good. He can agree to rapid deportation, based on general assurances from DHS officials who have said they will send parents home with their children. Or he can fight for asylum, not knowing what his chances are, how long it would take or whether it would prolong the separation.

The Trump administration has made its intentions clear. The DHS fact sheet provides guidance to parents on how to connect with their children only “for purposes of removal.” Despite all the chaotic turns in the zero tolerance policy and the sympathy awakened for the families, administration officials remain determined that the final outcome for most parents who crossed without papers—and their children—will be deportation.

When he set out from Honduras in late May, Posadas said, he had no inkling that Attorney General Jeff Sessions had initiated a policy – in a memo to federal prosecutors on April 6 and an announcement on May 7 – of zero tolerance for illegal border crossers that meant he could be separated from his son.

Like most migrants from northern Central America, he chose to cross the border in South Texas, because it is the shortest distance to travel across Mexico. But the Border Patrol is very active along those stretches of the Rio Grande, and successful illegal crossings are increasingly rare. Unlike many people from Honduras, Posadas said he did not come with a plan to ask for asylum.

After a night fending off swarms of mosquitoes in swamplands near the river, Posadas and his son were caught by the Border Patrol on the morning of June 11. “The first lie,” as Posadas calls it, came the following day.

He and Mauricio were still in frigid Border Patrol holding cells when officers told Posadas he would be leaving to do some “paperwork.”

“They said we would only be separated while I was doing the paperwork,” Posadas said. The child panicked, clinging to his father and crying.

“He didn’t want to stay there by himself,” Posadas said. The father argued with the officers, and that made things worse. “They just took him out of my hands,” he said. The last time Posadas saw his son, he was crying and reaching for him.

The paperwork turned out to be a hearing before a judge in the federal courthouse in McAllen for Posadas and 64 other migrants, including many parents.

After a 20-minute orientation during which a federal defender advised the dazed migrants to plead guilty, “They declared that we were all guilty of crossing illegally,” Posadas said. He only half understands that his plea made him a convicted criminal in the United States. He does not know what it could mean for his asylum case, or fully comprehend that immigration court is a separate proceeding.

The second lie came when they left the courthouse, Posadas said. Border officers told Posadas and the other parents, who were becoming worried, that the bus would take them back to their children. Instead, they were driven an hour down the highway to the detention center. Only after he was booked in to a bed in the barracks, and hours went by with no sign of his son, did Posadas realize that they had been separated.

Many migrants from Honduras say they are running from vicious street gangs. But Posadas has a different story. He said he was an activist mobilizing voters for the Anti-Corruption Party in Honduras and for Salvador Nasralla, its candidate in contested presidential elections in 2017. Nasralla claimed his opponent, Juan Orlando Hernández, now the president, stole the election through vote-rigging. Posadas said he joined days of street protests in his home town. Across Honduras, more than a dozen protesters were killed.

On New Year’s Eve, while he was celebrating at home with his family, he received the first of many phone calls from a man who threatened to kill him and Mauricio if Posadas didn’t stop protesting. Posadas said he recognized the man as an MS-13 gang member, who had hired out his services as a thug to Nasralla’s political foes. Posadas abandoned his home, taking his wife and their two children to a mountain village to hide. But Posadas still did not feel safe, so he gathered up Mauricio and left for the United States.

With a good lawyer, Posadas might win a case for asylum, since his story could fit into one of the classic categories under the American law, persecution based on political belief. But he has been deported before, when he tried to come here to work some years ago. And it would be up to an immigration judge to decide if his criminal conviction is disqualifying.

So he waits in the detention center, a hive of parental anxiety. In recent days, officers finally established basic telephone communication for families, and the parents are learning, with relief and dismay, that their children have been sent to Arizona, New York, Illinois and many other places.

But telephones in the center are few, the service is erratic and the scratchy lines are often unintelligible. Mysteriously, Posadas’s telephone account shut down for several days, leaving him incommunicado and frantic.

His one phone call with Mauricio, on June 22, was both sweet and painful. At first the boy wouldn’t talk, he only cried. “He is mad at me,” Posadas said. “He wants to be with me and he doesn’t understand why I won’t come get him.”

On Wednesday, Posadas was still waiting to speak with the social worker in charge of his son, to tell her that Mauricio was taking medication for a heart murmur and had frequent check-ups.

Unlike some parents, on the wristband he wears printed with his detainee information, he doesn’t have an all-important immigration identifying number for Mauricio. Because he didn’t know they would be separated, he never wrote it down. But not having the number makes every step in the immigration system more slow and difficult.

Most detainees know that President Trump cancelled new family separations, although his executive order of June 20 is silent on reunification of families already separated. Posadas was just beginning to hear news of a ruling by a federal judge in California on Tuesday, ordering families to be reunited in no more than 30 days.

But Posadas has not been told of any plan to return his son, perhaps because the authorities here don’t have one, with all the policy switchbacks in recent days.

Alex Azar, the Secretary of Health and Human Services, whose agency runs the shelters housing the children, said before the California ruling that they would not be reunited with parents in detention. He was since reversed by other officials. The Justice Department said Friday that it would keep parents and children together in detention for the duration of their immigration proceedings; that is, indefinitely. That decision would appear to contradict a court-ordered agreement known as the Flores settlement, which dictates that migrant children can generally not be detained for more than three weeks. The Justice Department has asked another federal judge in California, who oversees the settlement, to suspend that requirement. And in documents filed in the Flores case on Friday, Justice officials argued that the new court order prohibiting family separations effectively overrides the restrictions in the settlement on detaining children.

Regardless, awaiting Posadas and other parents who pursue asylum claims is an immigration court system far more unfriendly because of an array of recent actions by Trump administration officials. Asylum officers have been advised to raise the bar for the initial test asylum-seekers must pass. A decision on June 11 by Attorney General Sessions sharply narrowed the avenues to asylum for victims of criminal gangs and domestic violence, and was specifically designed to deny protection to many people from Central America.

Teams of lawyers have come to the detention center in recent days to advise parents for the first time of their rights. They found that many parents were impatient with legal talk and only concerned about their children.

“A lot of people are fearing for their lives, they have been victims of crime, extortion, rape,” said Lucero Ortiz, director of legal services for the Central American Resource Center, an immigrant service organization in Washington, DC. “But nothing compares to being separated from their children.”

As the days in detention drag on with no plan in sight, migrants who could present viable claims told lawyers they might agree to deportation if it means they will be reunited. “They would rather go back to a situation they fled for their lives, but they just want to be with their children,” Ortiz said.

Posadas may be one of them.