The Video Doesn’t Lie — Even If the Officer Did

The guilty verdict for Jason Van Dyke, the Chicago police officer who killed Laquan McDonald, demonstrates an all-too-common difference between a police officer’s testimony and the evidence depicted in a video recording. Being a retired police officer, I’m left wondering whether Van Dyke would have been charged with anything, let alone convicted, absent video evidence. Without it, Van Dyke’s case would have rested—as most police shooting cases do—on his word and the supporting voices of his fellow officers. Historically, that is all that has been needed to exonerate an officer.

Though it doesn’t answer every question or always tell the whole story, video evidence, including well-regulated body cams and in-car camera systems, should be a mandatory component to policing. That said, we can’t rely solely upon the existence of video footage to create accountability and cannot have accountability without the transparent release of information.

The preliminary investigation into McDonald’s death is a textbook example of the absence of transparency. Prior to the video’s release, everyone from internal investigators all the way up to the mayor’s office had seen the footage. Yet Van Dyke received no meaningful corrective or disciplinary action. No charges were even filed against an officer throwing his training out the window and unloading 16 rounds into a teenager. 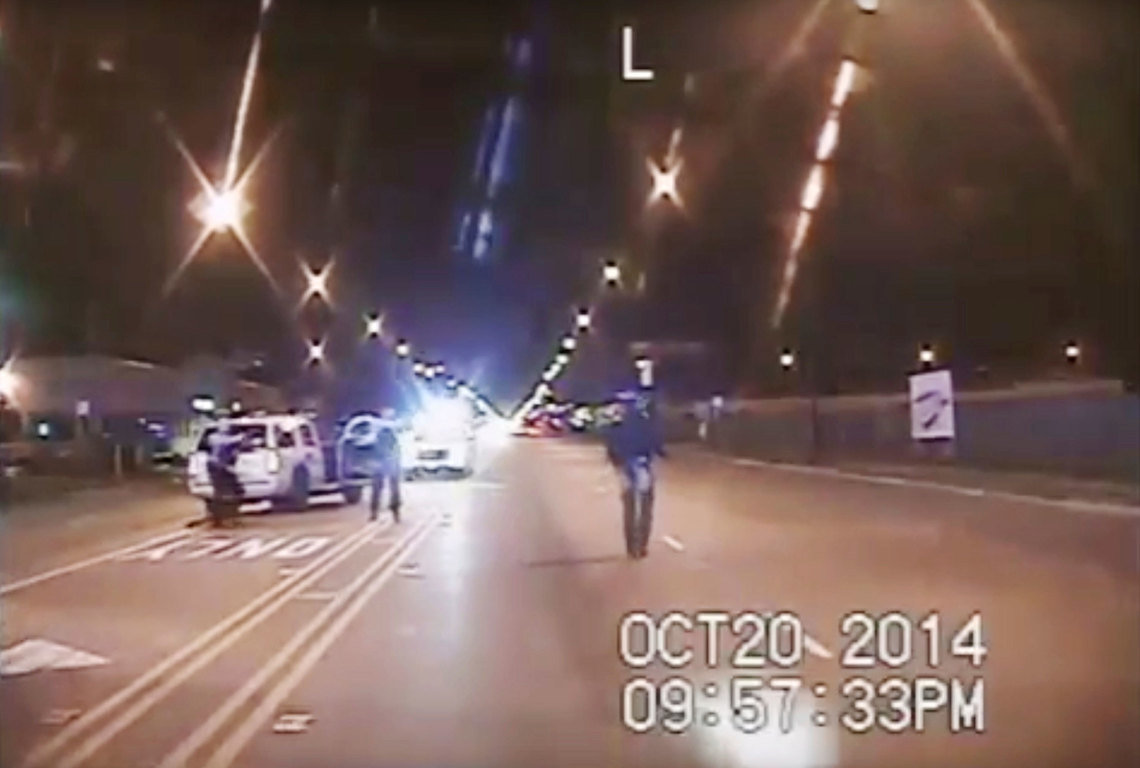 A still image from a dash-cam video of Laquan McDonald, right, walking down a Chicago street moments before being fatally shot by Chicago Police officer Jason Van Dyke in October 2014.

After the incident, a settlement that McDonald’s family negotiated with police barred the release of the video footage of the incident. While McDonald’s family didn’t want to see the video, police may have also had an obvious interest in keeping it under wraps because it contradicts the incident reports police filed immediately after the shooting. That account called the shooting a justifiable homicide due to McDonald supposedly engaging in aggravated assault of a police officer with a knife. Freelance journalist Brandon Smith later filed suit to have the footage released because of witness statements that also contradicted the police narrative.

Among other falsehoods, Van Dyke claimed, “He [McDonald] wasn’t approaching toward the fence,” even though McDonald is clearly seen walking away from officers and toward the fence. McDonald also didn’t “[wave] the knife from his lower side upwards, across his body towards my left shoulder,” as Van Dyke testified. The fact that Van Dyke believed he could convince the court of his version of the story when it goes against video evidence suggests Van Dyke believed it would exculpate him. Sadly, based on previous cases much like this one, he had every reason to believe it would work.

Even when there is video evidence, it’s difficult to hold police officers accountable for deadly encounters because we’ve made it easy for them to legally justify their behavior. Philando Castile was shot by an officer during a traffic stop, and both police dashcam video of the incident itself and footage of the aftermath filmed by Castile’s girlfriend, Diamond Reynolds, paint a disparaging picture. Castile warns the officer that he has a firearm on him. The officer acknowledges that and tells him not to reach for the weapon. Castile and his girlfriend both explain he isn’t reaching for it, but Officer Jeronimo Yanez fatally shoots Castile through the window despite their reassurances and even though there is a child in the back seat. Reynolds then asks the officer why he shot Castile, to which Yanez replied, “I don’t know.” Yanez was acquitted of second-degree murder and other charges because he “feared for his life.”

The “fear for one’s life” argument police use in shooting cases stems from Graham v. Connor, a 1989 Supreme Court case decision. The court ruled that an “objective reasonableness standard” should be applied when law enforcement officials use excessive force when detaining a person. Legally, this means the court must find the actions of the officer were “reasonable” given the circumstances and what was known to the officer at the time. In practice, all that is usually required for an officer to legally justify the use of deadly force is to articulate a fear for his or her life, or that of another—without requiring the consideration of alternatives.

The case has been invoked in many police use-of-force incidents since Graham, including the historic case against officers involved in the beating of Rodney King in 1991. The jury in this case was asked to consider the Graham ruling—“the officer’s reasonable perceptions”—in their deliberations. The “Graham Standards” are even mentioned in police training manuals in some agencies, including those of the LAPD.

States such as California have begun the process of assessing the “objective reasonableness standard” with a critical eye toward changing it. Proposed but so-far-unsuccessful bill AB 931 would change the standard for deadly force from “reasonable” to “necessary due to the lack of reasonable alternatives.” This heightened standard would mean that in order for the use of deadly force to be justified, a reasonable peace officer under the same circumstances would conclude there was no reasonable alternative to the use of deadly force that would prevent imminent death or serious bodily injury to the officer or another person.

Every officer—every human being—approaches dangerous situations with some degree of fear. For police, it’s a near-constant emotion we feel because there are circumstances that initially seem safe but in which people do threaten or attack us. We’re trained to anticipate this and react appropriately, but traumatic experiences and bias can quickly override training. Officers who can’t manage their fear are dangerous and not fit for duty. Fear for one’s life is a subjective experience and shouldn’t be weighed more heavily than video and other forms of objective evidence that are easier to substantiate and interpret.

I’m cautiously optimistic that Van Dyke’s verdict will have an impact on similar cases in the future, but what’s really needed to change the verdicts in use-of-force cases is widespread policy reform that increases transparency and accountability, changes the way police testimony is weighed and interpreted in court, and creates effective civilian oversight into every stage of investigations.

Maj. Neill Franklin (Ret.), a 34-year veteran of the Baltimore and Maryland State Police Departments, is executive director of the Law Enforcement Action Partnership, a nonprofit group of police, judges and other criminal justice professionals working to advance public safety solutions. LEAP may be reached via Twitter @PoliceForReform