Out From the Holocaust

Germany reckoned with its past to build a better justice system. America should too.

I never wanted to go to Germany. The horrors of the Holocaust are still too raw. While my family was long-settled in the United States by the start of World War II, too many other Jewish families experienced the unthinkable.

My grandfather, a rabbi in Louisiana, served as an Army chaplain during the war. To the day he died, he couldn’t talk to us about what he saw. The atrocities he witnessed left him deeply scarred.

This article was published in collaboration with The Forward.

So when I received an invitation to join a delegation to study German prisons, I was torn. How could I study Germany’s prison system given everything we know about its past?

I decided to go, to grapple with this history, and what the Germans might have learned from it. Our tour started with a visit to the Neuengamme Concentration Camp Memorial. More than 100,000 people spent time there or in one of its satellite work camps. Over 42,000 died there or on death marches. Being among the eerie remains of barracks and barbed-wire fencing left me sickened. 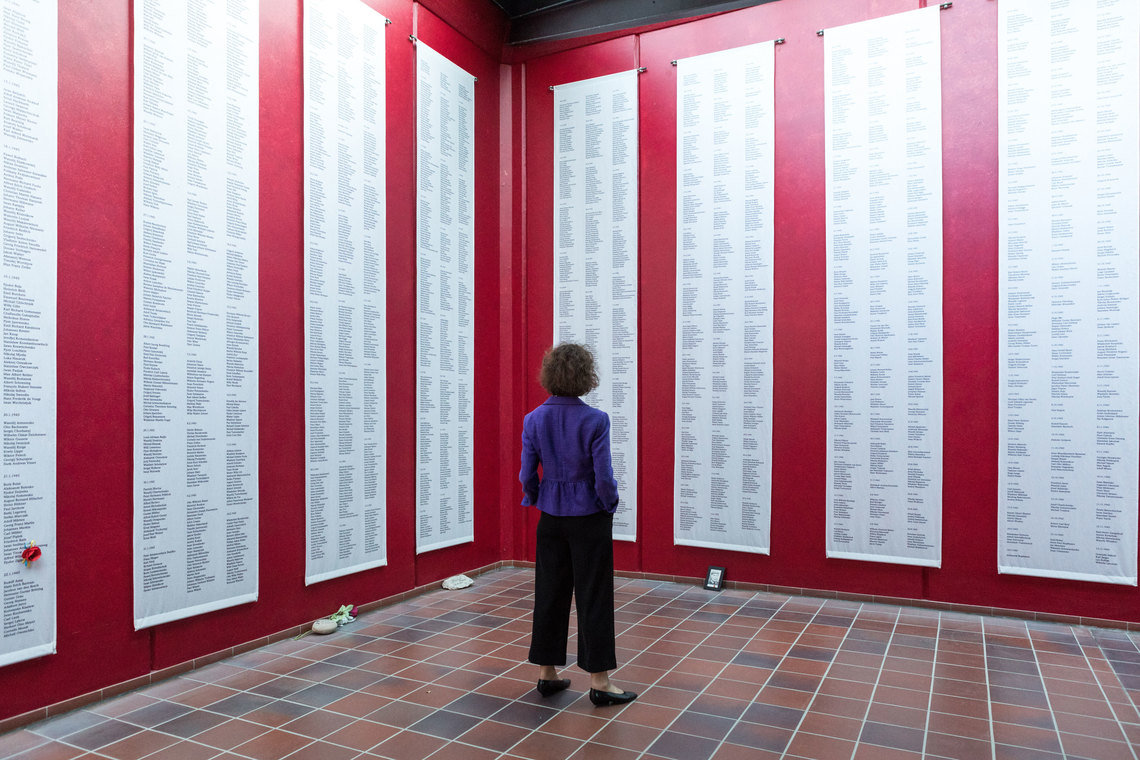 Amy Solomon viewing the names of all the people who came through the Neuengamme concentration camp in Hamburg, Germany.

After leaving Neuengamme, we toured three modern prisons: Billwerder in Hamburg, a large institution for people sentenced from six months to two years; Heidering in Berlin, a prison for men sentenced up to five years; and an “open prison,” where people sleep at night but spend their days working and accessing treatment and services in the community.

What I saw was remarkable. There are open spaces and lots of light. Windows have bars but open, so you can breathe fresh air. There is art. In Germany, 1 percent of any public project budget must be devoted to art. That struck me—people in prison are still considered citizens of their towns and country.

Those incarcerated generally have their own private rooms. They are encouraged to call home to keep family relationships intact. Kitchens in the units encourage cooking and community.

It’s the overall culture that feels most foreign. Relationships with staff are respectful and collegial, not adversarial. People who are incarcerated are seen and treated as people—not inmates, convicts, or “other.” My colleague and friend Daryl Atkinson, who was incarcerated in Alabama in the 1990s, was struck to hear correctional officers calling those incarcerated by their names. “Hey, inmate!” had been his experience.

In preparation for my trip, I researched my grandfather’s experience. To my surprise, a draft memoir I’d never known about materialized, his firsthand accounts that had been locked away in a briefcase. One of his stories describes Zeilsheim Displaced Persons Camp, where newly-freed Jews lived because they didn’t know where else to go. It was November 1945, and my grandfather was going home. They presented him with a prayer book that had been hidden throughout the war—tucked under mattresses, under manure piles, and, he wrote, “even wrapped between the emaciated legs of women who were determined that it, at least, should survive, even if they did not.”

My grandfather accepted the book and pledged to treasure it. As he left the camp, people called out, “Vergisst uns nicht!” Don’t forget us, Rabbi—and don’t let the world forget what happened to us. 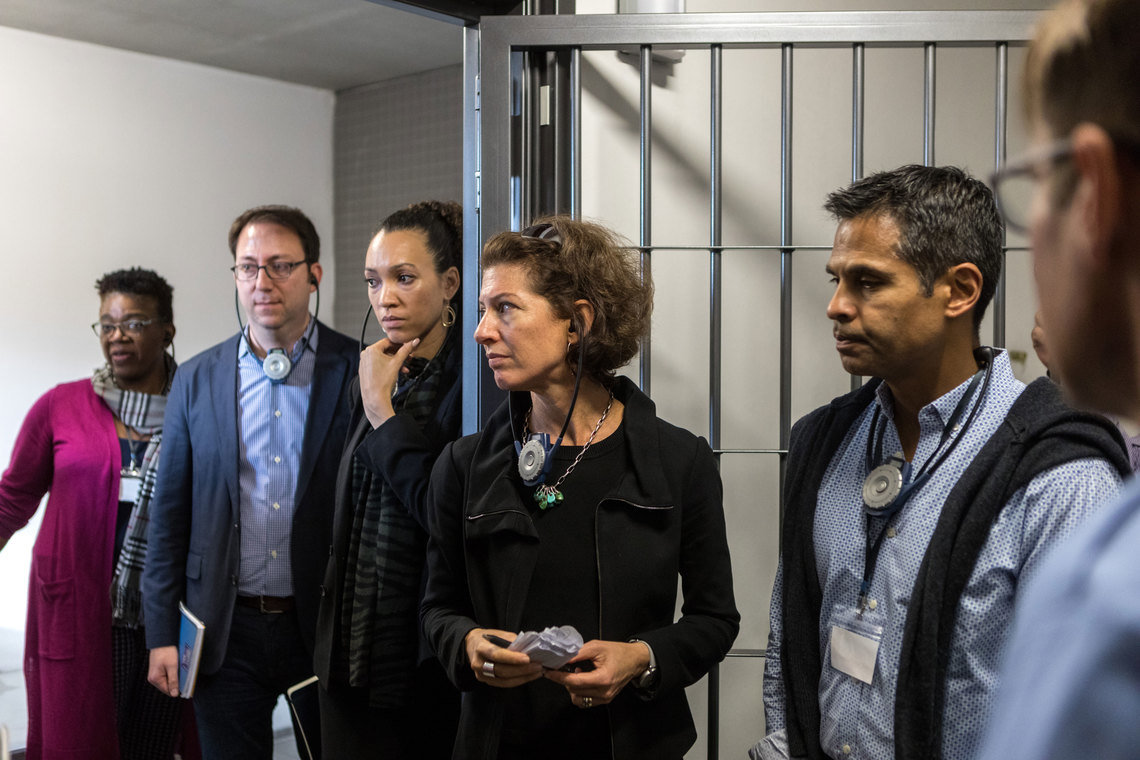 Amy Solomon, center, and the Vera Institute contingent at Heidering Prison in Berlin.

To my surprise, Germany isn’t carrying around its past like some dark burden. It confronts it daily, and its lessons shape the country’s future.

The underpinnings of the German prison system are respect, rehabilitation and reintegration. More than a philosophy or a slogan painted on a prison wall, it’s written into law. The German Constitution states that “human dignity shall be inviolable.” The German Prison Act reinforces this view by establishing that the sole objective of incarceration is rehabilitation, so that people will return to their communities and lead crime-free and productive lives.

In fact, the Germans view a person’s loss of liberty as the full punishment. Further punishments—terrible conditions and deprivations—are neither expected nor accepted. The goal is to prepare people to go home to be better parents, neighbors and colleagues. Prison is structured to be as close to life on the outside as possible.

Because of this fundamental framing, prison is an option of last resort. America’s incarceration rate is about 10 times higher than the German rate, and only 6 percent of people sentenced in German courts receive a prison sentence. Everyone else receives community-based sanctions, such as day fines or community service. For those who do receive prison sentences, nine out of 10 will serve less than two years. And very few experience additional levels of punishment, such as solitary confinement, all too common in the United States. 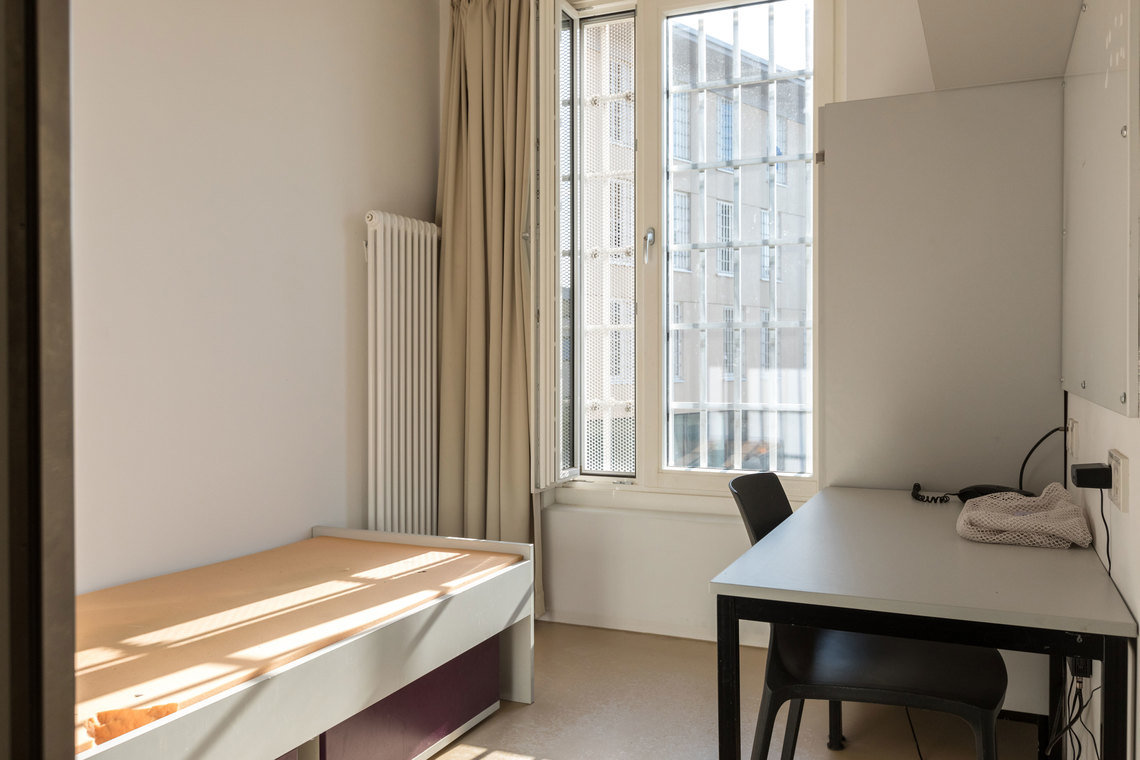 A resident’s living quarters at Heidering Prison in Berlin.

In the United States, our criminal justice system exploits and builds on the ugly legacy of slavery, segregation and Jim Crow laws. A seminal report estimates one in three black men will be incarcerated in their lifetimes, one in 13 black adults cannot vote due to felony convictions, and one in nine black children has a parent in jail or prison.

Germany has taken its horrific history into account and built a modern criminal justice system in response. The structural underpinnings of its rehabilitation model, the physical environment of its prisons and the culture of respect are testament to what change can look like. As Connecticut Department of Corrections Commissioner Scott Semple observed after a particularly intense day: “This is about creating a place that, if our son or daughter had to be here, we’d have faith they would come out better people, not damaged people.”

I still struggle with the idea of commending Germany’s prison system. The Holocaust stole human dignity from a generation of Jewish people and many others in Europe and around the world. My deeply ingrained feelings of distrust, disgust and skepticism are not irrational or uncommon—similar to why so many people of color do not trust America’s criminal justice system today.

Like others, I’ve spent my career trying to improve incarceration policy and eliminate barriers to successful reentry. But these efforts were largely framed in race-neutral and therefore history-neutral terms. As we reimagine what prisons in America should be, I now see that we must start by acknowledging the oppression, discrimination, and racism that led us to this point and still exist in the system today.

“Never forget” is a common refrain from the Holocaust. America cannot forget, either. We must stand together to say “never again” and then demonstrate our commitment to human dignity, and a true justice system, for all our people.

Amy L. Solomon is Vice President of Criminal Justice at the Laura and John Arnold Foundation. She may be reached at asolomon@arnoldfoundation.org

Disclosure: The Arnold Foundation is a funder of The Marshall Project.