Eric Gonzalez says he doesn’t remember getting pulled over, nor does he remember evading his arrest in Fullerton, California. The only thing he knows is that he woke up very hungover and faced up to nine years in prison for assaulting a police officer, along with five other charges.

Gonzalez, however, was on active duty in the U.S. Marine Corps when he was arrested in 2012, and thus eligible for an alternative: a veterans treatment court that helps service members charged with misdemeanors and some felonies avoid incarceration, if the crime is related to a mental health issue or drug dependency.

For nearly a year in the veterans treatment court program he went to therapy, sobered up and finished his schooling. He’s out of the military and now works as an audio engineer. 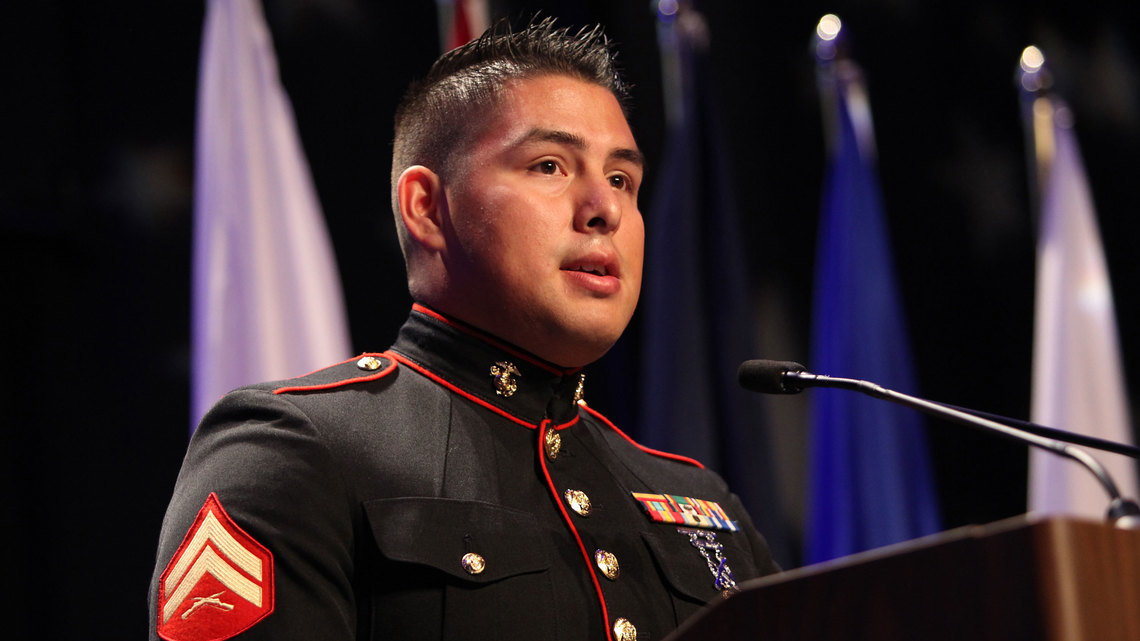 But to take advantage of it he had to relocate to a neighboring county, away from his friends and family. There was no veterans treatment court near his home in San Bernardino County.

While almost all of the more than 3,000 counties in the U.S. have established specialized courts for drug addicts and the mentally ill, veterans courts have languished because of a lack of financial support, reliance on volunteer judges and low usage. Only about 500 counties have opened vet courts since the first ones in 2008.

The Marshall Project contacted 35 courts in counties with large concentrations of veterans and found that few see more than a couple dozen cases a year. One Iowa veterans court has tried 10 cases since 2015.

“In order for this to work, there needs to be a combination of several different things: primarily a judge who’s interested and a county attorney who’s open-minded,” said Jeffrey Paulson, the presiding judge who volunteers once a week to oversee the veterans treatment court in Woodbury, Iowa. “It’s got to be a labor of love.”

Because the courts are newer and there are so few, research on their efficacy is scarce. Anecdotally, among participants, the courts seem to work. But there’s been only a small handful of studies done over the past few years that have shown varied results with lowering recidivism among veterans who attend the courts compared to civilians.

“This veterans court model evolved like many of the other specialty courts, just out of [judges who] believed there was a need from what they saw in their courtrooms… and it spread without scientific evaluation,” says Julie Baldwin, associate director for research for justice programs at American University in Washington D.C. “To say one veterans treatment court works doesn’t mean they all work.”

There are almost 200,000 veterans incarcerated in American prisons and jails, according to the Bureau of Justice Statistics. A third of those served in Iraq and Afghanistan, two operations that have resulted in what many refer to as “invisible wounds,” such as post traumatic stress disorder and mild traumatic brain injuries. These cognitive disorders are known to increase drug usage and alcoholism, and tens of thousands of veterans or active members are incarcerated for drug possession or other misdemeanor crimes each year.

For veterans or active service members to qualify for the court they must have a mental health condition related to their deployment in an active battle zone. Prosecutors work with defense attorneys to negotiate whether the case should be heard in the treatment court, and service members go through counseling funded by the Department of Veterans Affairs. Once they are finished with the program, which can last from a few months to years, all charges are dropped.

President Trump last year signed off on $20 million in grant funds through the Bureau of Justice Assistance for treatment courts, and both President Barack Obama and President George W. Bush pushed for greater funding, as well.

But the veterans treatment courts haven’t disseminated to areas where there might be the most need, especially in rural areas, says Baldwin, who co-authored a paper calling for the courts to be more critically scrutinized. Nine states have no veterans treatment courts at all, according to the National Center for State Courts, and some have only one, forcing some users to travel hundreds of miles.

“I think it’s important that instead of finding these people guilty, convicting them of a crime and incarcerating them, it’s important to try and find a root cause of what brought them to this point,”said Weld, once an assistant prosecutor.

In North Carolina, where there are four courts, Tommy Rieman, a former Army staff sergeant who was charged with driving under the influence, had to travel two hours every week for his court dates near Fort Bragg, 125 miles from where he lived in Charlotte.

“North Carolina is supposed to be this amazing state that is supportive of the military,” Rieman said, adding that the time and travel costs often put him in a financial bind.

But even where the courts have expanded, usually through the initiative of judges, there sometimes is little demand for them.

In Springfield, Missouri, the veterans court has seen 43 cases in the past six years. That’s primarily because the 9,000 veterans who live in the area are almost all retired and older, says Rhonda Ledbetter, the county’s court coordinator.

Even in counties that have a younger population, such as Phoenix or Dallas, few people go through the courts.

In San Diego and Seattle, both hubs for the U.S. Navy, only 200 cases have been heard in the past seven years—combined.

Some court administrators point to limitations on what cases can be heard, which vary from county to county. A felony that might make someone eligible in one jurisdiction, for example, would disqualify them in another.

Terree Schmidt-Whelan, executive director of Pierce County Alliance, which keeps records for the district court in Tacoma, said that because their program only takes on certain misdemeanors—the low hanging fruit, essentially—the total number of service members their court sees is drastically fewer than what they want.

In Bell County, Texas, north of Austin, the veteran population accounts for 9 percent of those who come into contact with the criminal justice system and 18 percent of probationers.

“That’s double the national average,” according to Todd Jermstadt, director of community supervision for Bell County’s Department of Corrections. He also works with the county’s veterans treatment court, which has tried 177 cases in the last three years.

The number shocked him.

“I don’t get it,” he said. “Those numbers are just so low, I can’t fathom. Why aren’t we seeing these people? They’re out there. It’s not that hard to find veterans in Bell County.”