Immigration Courts Getting Lost in Translation

Migrants often speak languages that are little known in the U.S. (except maybe in New York City): K’iche’ from Central America, Urdu from Pakistan, Creole from Haiti. American immigration judges have a hard time finding enough interpreters to show up in courtrooms.

Now the Justice Department has ordered the judges to use more translators who work over the phone because of what the agency says are budget problems. But judges and lawyers say the quality of the telephone translations suffers and may be leading to unfair deportation trials.

The head of the immigration-court system emailed judges Dec. 11, telling them to use phone interpreters for languages except Spanish, according to leaders of the National Association of Immigration Judges. 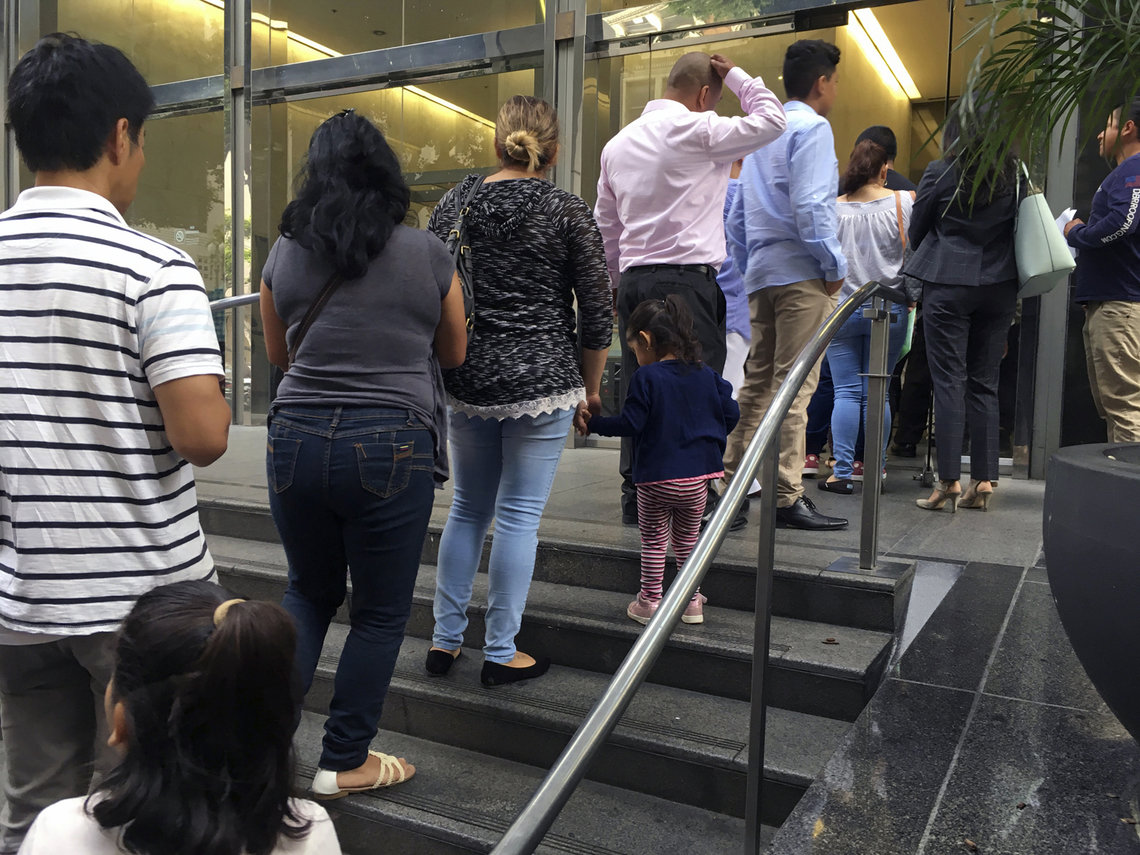 People line up outside the building that houses the immigration courts in Los Angeles in 2018.

The spokeswoman for Chief Immigration Judge MaryBeth Keller did not respond to repeated requests for comment on the email.

Federal law requires an interpreter be present for an immigration hearing whenever a defendant does not speak English. The courts typically have staff translators for Spanish and Mandarin, the two most common foreign languages they deal with.

But in the past five years, more and more immigrants have been coming to the U.S. from Central America speaking uncommon languages such as K’iche’, used by Mayan people in Guatemala. Last year it was the 12th most frequent language spoken in immigration court, just behind French.

“There might only be literally a couple dozen of people anywhere in the U.S. who speak this language that 20,000 people in the world speak,” said Scott Shuchart, co-author of a report by the left-leaning Center for American Progress on language access for migrants.

Because there are so few translators for these languages, interpreters are hard to find and mostly available only over the phone. But dial-in interpretation is often inadequate, because the translation services are hard to schedule and the quality of the telephone connections can be poor, critics say, adding that these problems are worsening backlogs in immigration courts across the country.

“The bottom line is that we are supposed to be resolving immigration cases, and part of that is providing interpreters,” said Mimi Tsankov, an immigration judge in New York who is a leader of the judges’ association. “To micromanage the use of interpreters truly affects the ability of the judge to reduce this backlog and also meet their performance goals.”

A 2004 memo issued by the Department of Justice said that to keep costs low, no in-person interpreters should be used for short pre-trial hearings unless more than five cases required the same language. Judges say that directive has never been enforced, until now. And in a time where rare-language speakers are needed more often, they say, the email from the chief judge improperly forces judges to be budget hawks rather than adjudicators.

The Department of Justice has translation contracts with three organizations for both in-person and phone interpreters, whose services can be scheduled, according to a statement from Kathryn Mattingly, press secretary for the agency’s Executive Office for Immigration Review.

In-person interpreters show up in court at a specific time. For a phone interpreter, a judge must first call a translation company at the beginning of a hearing and then wait to see if someone is available. Many times, no one is. So what should be a five-minute hearing can take much longer or can be delayed for weeks.

“These language issues mean people are detained for longer amounts of time without a full and fair hearing,” said Erin Quinn, a senior staff attorney at the Immigrant Legal Resource Center in Washington, D.C.

SOS International, which provides in-person interpreters to the agency, did not respond to emails requesting information. Lionbridge Global Solutions and Language Services Associates, which provide only phone interpreters, declined to comment.

When translators are available over the phone, the call quality can affect the outcome of a hearing, especially if the interpreter is in a region with limited cell service.

Court stenographers write down only what’s translated by the interpreter. If that person mistranslates or if portions of the call get dropped, what’s actually said in the original language isn’t legally part of the record.

In one case, a Spanish-language translator working by phone managed to handle only about half of what was said in the course of the hearing, said Swapna Reddy, co-director of the Asylum Seeker Advocacy Project at the Urban Justice Center, a social justice advocacy center in New York.

The judge replaced the interpreter midway through the hearing, Reddy said. “But that was good fortune that she spoke both languages.”

Correction: A previous version of this article misstated the name of the Asylum Seeker Advocacy Project and identified a female judge as male.