Trade Your Prison Sentence for a Smartwatch?

Last summer, Delores Wallace’s sister, who was serving a 3 ½-year sentence in federal prison, asked her to look into a company that was all the buzz on her cell block. The company, called Oaks of Justice, claimed it could help people get out of federal prison early and serve out their sentences at home while being monitored by a state-of-the-art surveillance system.

Wallace was skeptical. Her sister had just spent over $6,000 on another early release promise that went nowhere—one that claimed she could shave time off her sentence by enrolling in rehab. “At this point, I’m nobody’s fool,” Wallace said. But her sister was hopeful, so Wallace agreed to contact the founder of Oaks of Justice, a woman named Jo Morgan.

In emails to Wallace, some of which were shared with The Marshall Project, Morgan explained that her program allowed people convicted of nonviolent offenses to go home if they agreed to be tracked by an electronic monitor worn on their wrist like a smartwatch. It sounded like a good deal for everyone involved: Participants would return to their families while the federal government would save “billions” on incarceration. Morgan has claimed in emails and phone calls with potential customers that officials with the Federal Bureau of Prisons and President Donald Trump himself support the program.

But attorneys familiar with the federal prison system and a former bureau official said, based on their years of knowledge and experience, that a program of this kind would never happen. A spokesperson for the Bureau of Prisons confirmed in an email to The Marshall Project that the agency has no such deal with the company. And a reverse Google image search shows the photos of the company’s “proprietary” new tracking devices appear to be consumer GPS devices from the Chinese e-commerce site Ali Express, marketed to help monitor confused elderly people or teenage children.

In a phone call, Morgan—whose real name, according to court records, is Winnie Joanne Barefoot—insisted that the company was legitimate and was nearing approval from the Justice Department but that she could not provide proof. “The correspondence between my lobbyist and the federal government right now is confidential,” she said. “I’m not stupid. I wouldn’t fritter away money on something totally speculative … I truly believe this will happen.” Morgan said that the tracking devices displayed on her site may look the same as existing products on the market, but they have new technology inside.

The man Morgan identified as her lobbyist did not respond to a request for comment.

The widespread interest in Morgan’s company shows how easily misinformation can spread in prison, where people are desperate for any chance to return home. At the same time, people inside often lack the ability to adequately vet the numerous companies and individuals targeting them with promises of shortened sentences. In emails sent to potential customers last summer, Oaks of Justice said it had nearly 1,000 applications. Law firms and nonprofits that work with people in federal prison say they’ve been inundated with questions about the organization. Attorney Shon Hopwood in Washington, D.C., estimated that about 100 people have reached out to him with questions about the program.

After her initial correspondence with Oaks of Justice, Wallace received a letter saying her sister had been accepted to the program. When the company received final confirmation from the Bureau of Prisons, Morgan wrote in the letter, they would contact her for the $250 application fee. After that, according to letters sent by the company, the program could cost her thousands of dollars, depending on how much time was left on her sister’s sentence and her conduct while being monitored.

Morgan said she has not yet taken money from any potential customers. Several families told The Marshall Project that Morgan told them to hold off on payment until the Bureau of Prisons gave final approval, which the company claimed was coming any day. 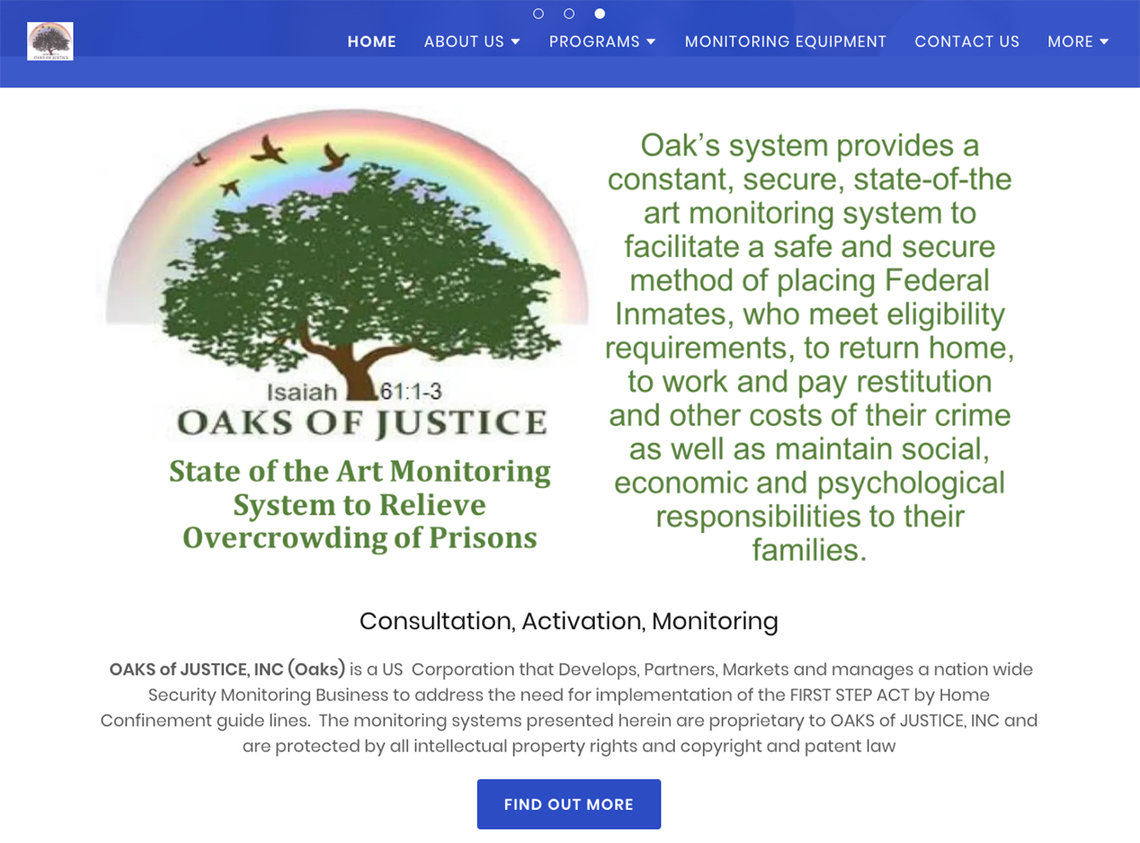 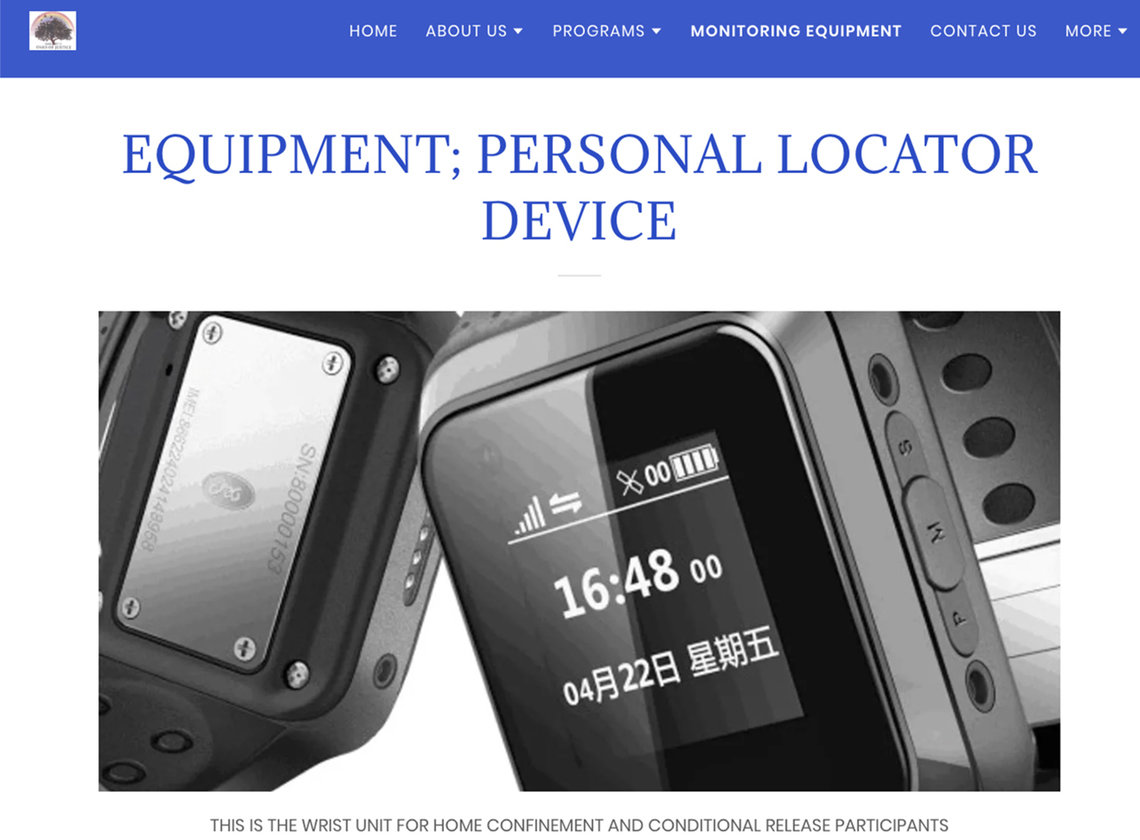 Oaks of Justice’s website claims it can help people get out of federal prison early and serve out their sentences at home while being monitored by a surveillance system.

Harvard Law School professor Rebecca Tushnet, an expert in false advertising, said the company could be breaking federal law even if no money has been exchanged. “If the pitch is, ‘Eventually I’m going to ask you to send me money,’ then definitely that can violate the law,” Tushnet said. “She’s clearly causing damage. Most of that damage is not going to be economic.” In a follow-up email, Morgan did not comment on whether the company was engaging in false advertising.

Even if Morgan‘s company isn’t breaking any laws, she appears to be sowing false hope among hundreds of families whose loved ones are in federal prison.

“I will be so mad if this organization is not a real thing. They have told my family it is real—my mother has high hopes of me coming home before her mother passes away,” one woman in federal prison wrote in an email. She asked to remain anonymous in case the company turns out to be legitimate after all. “If the Oaks IS real, I don’t want to ruin my chances of being able to come home through their program. I need all of the hope I can get.”

Morgan, who has used several aliases, was released from federal prison herself in December 2016, after serving nearly five years for bank fraud for multiple white-collar crimes, according to court records. Among them was running a hyperbaric oxygen therapy business—a medical treatment to increase oxygen to the lungs—that billed insurers for hundreds of thousands of dollars of treatment that was never provided. In a phone call, Morgan denied profiting from false insurance claims, but said she took a plea deal to shield family members involved in the business from further investigation. She said her many name changes were because of adoption, marriages and nicknames, not to conceal her identity.

Nine months after she was released, while still on probation, Morgan registered the Oaks of Justice website under the name Joanne Barefoot Morgan. Three months later, she licensed the business in Pennsylvania. She opened Facebook and Twitter accounts for the company in 2018. She has acknowledged her incarceration in conversations with customers and said in a phone call with The Marshall Project that her probation officer is fully aware of the company.

“@RandPaul please get us 10 minutes with President Trump oaksofjustice.us is 1200 new jobs and 2billion saving to US Gov't over 5 years,” she tweeted in January 2018. “We don't free inmates, we free taxpayers wallets.” The senator did not reply or reshare Morgan’s tweet.

On its website, Oaks of Justice details how its monitoring program is supposed to work. Participants must remain within boundaries, or a “geo-yard,” which would be set at the time of their release. The monitors worn on their wrists would track their pulse, respiration and even alcohol and drug use, according to the website. The company claims that its program is part of the First Step Act, the federal prison reform legislation signed by President Trump in December 2018.

According to several people in federal prison, Morgan has advertised through letters and emails sent through Corrlinks, the private email service used in federal prisons. They shared their correspondence with The Marshall Project.

In recent months, Morgan has pleaded with would-be customers to be patient and stop emailing questions about when they will be sent home. “Please do not ask for updates. We just counted, and since August 15th, we have answered over 400 emails about this very subject,” she wrote in September, according to emails obtained by The Marshall Project. “BELIEVE us, we will tell you when it is GO time. NONE of you are more anxious than we are. If you think you are tired of waiting and getting depressed, please walk in our shoes.”

As sites including Ripoff Report and federal prison-related Facebook pages and listservs started to warn families about the company, Morgan also tried to wave them away. “PLEASE DO NOT CALL OR EMAIL US ABOUT THE CURRENT RUMORS. WE CANNOT take time to respond,” she wrote in an email to customers in July. “If someone is trashing Oaks, then look at what their motivation could be. Are we maybe cutting into their business model when we succeed?”

After receiving her sister’s acceptance letter from Oaks of Justice, Wallace asked friends with law degrees for advice and Googled around for reviews of the company. She stumbled across a YouTube video by prison consultant Dan “RDAP Dan” Wise warning people about the operation, which convinced her it wasn’t real. Wallace never sent Morgan any money, and the Bureau of Prisons moved her sister to a halfway house this winter as her sentence nears its end. But that meant leaving behind more than 20 women on her cell block who were still hoping that Oaks of Justice would work for them.

“Prison is like a trial run of death. You’re still breathing, you’re still getting up, but you have zero decisions about yourself. You have nothing,” said Wallace’s sister, who asked to remain unnamed out of concern she could be sent back to prison. “To have someone promising and promising and never come through—what can I believe?”