Masks On, Fists Up: Scenes from New York City’s Protests Against Police Violence

Some of the city’s most famous streets, emptied by the pandemic, fill with demonstrators and police in riot gear. 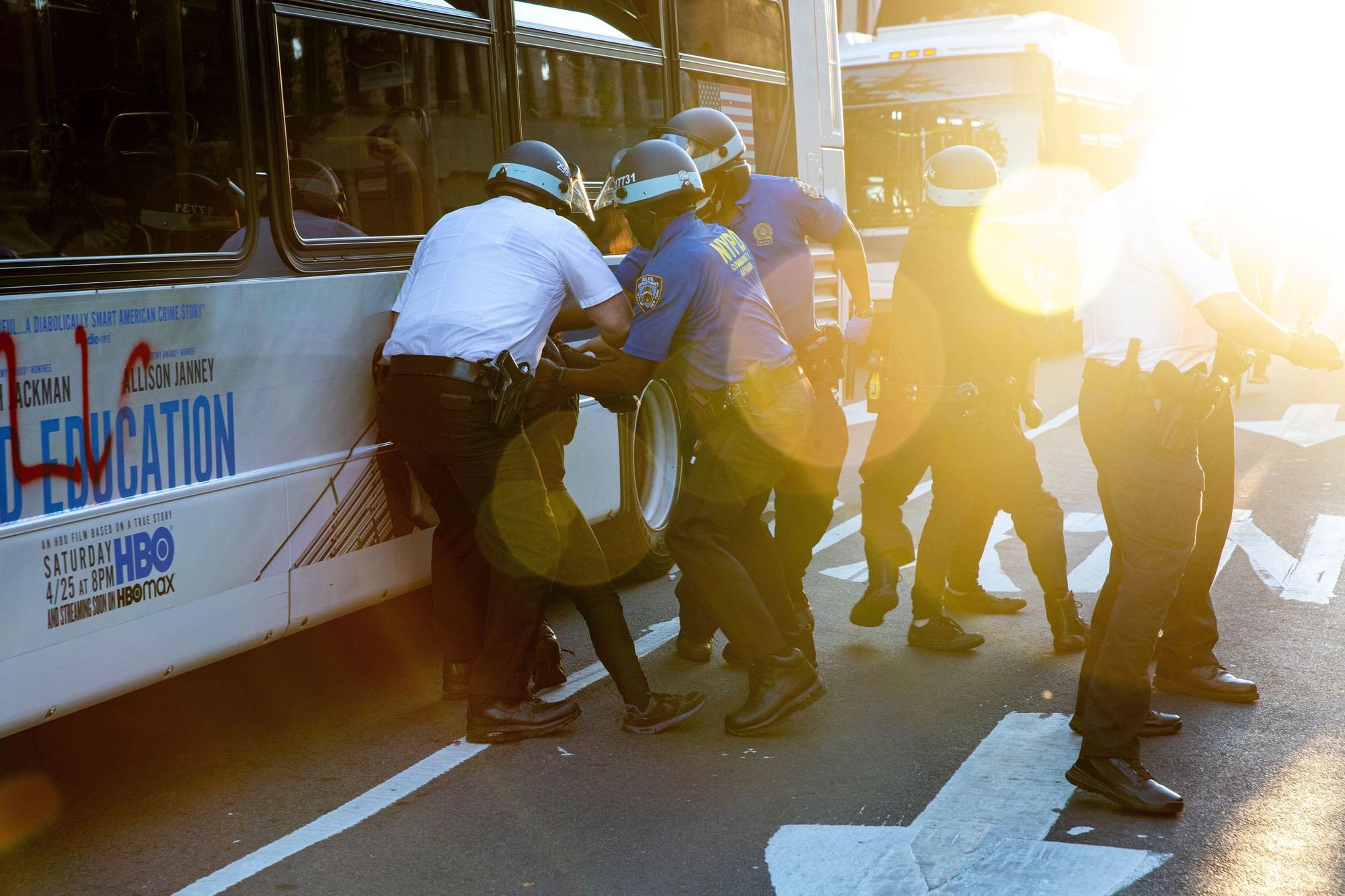 Police arrest two women for spray painting a local bus in downtown Brooklyn with the acronym FTP (“Fuck the Police”). They had started writing “No Poli…” when officers grabbed them, knocking them to the ground.
Photographs and text by Emily Kassie

Since the death of George Floyd in Minneapolis last week, protests against police brutality have erupted in over 350 U.S. cities, from Louisville to Anchorage. In New York City, demonstrators have gathered and marched in Herald Square, Washington Square Park, the boutique-lined streets of Soho, and the Barclays Center and Grand Army Plaza in Brooklyn. In neighborhoods already quieted by the coronavirus shutdown, thousands have kneeled together in silence and have taken over bridges and major roadways. Many have worn face masks and have tried, mostly in vain, to maintain social distance.

When police formed barricades to stop them, protesters chanted, “Let us through,” “March with us,” and “Quit your jobs.” And they called for justice with signs that read “Black Lives Matter,” “Charge Killer Cops,” “Defund the NYPD” and “Stop Killing Black People.” After dark, long marches turned to confrontations between police units and smaller groups of protesters.

Although the protests have been largely peaceful, sporadic looting and vandalism has also taken place throughout the city. On Sunday evening, protesters pulled looters out of stores in Soho, forming barriers and urging people to continue to march in peace, shouting, “This is not what we’re here for!” Many rallies have culminated in forceful tactics from the police, including the use of tear gas, pepper spray and rubber bullets. For the first time since World War II, the city is under curfew.

The Marshall Project’s Emily Kassie has been photographing the protests in Brooklyn and Manhattan. Her images reveal city residents, still reeling from the pandemic, coming together to protest police violence, and during some tense moments, confronting officers head on. 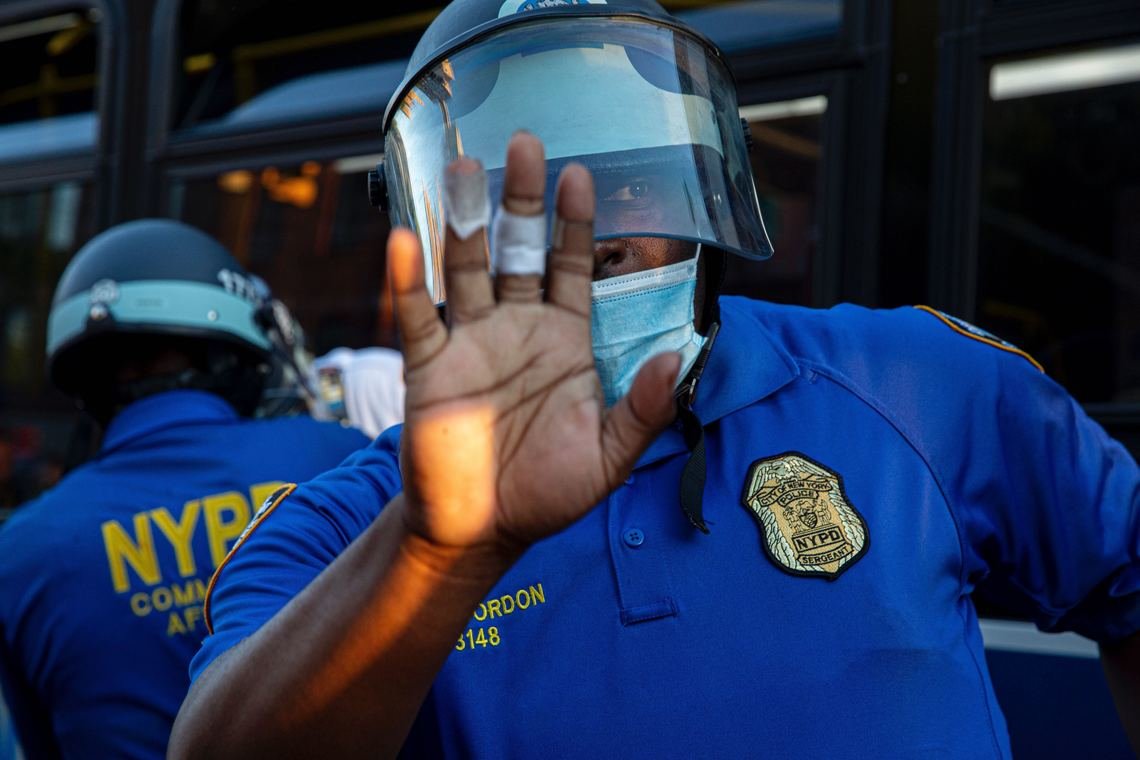 An officer stands in front of other police who are arresting two women for spray painting a bus in Brooklyn. 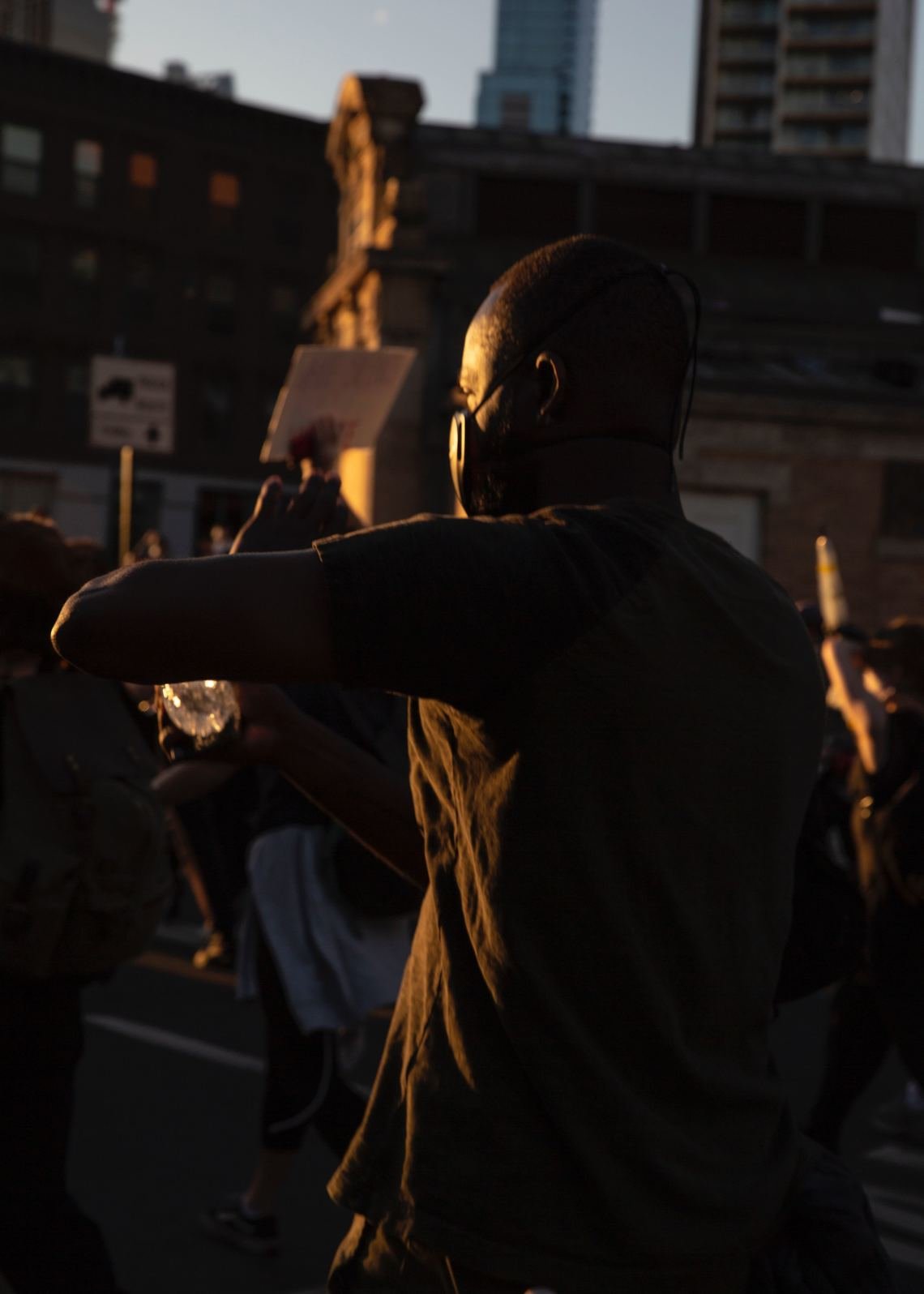 A protester makes his way toward the Manhattan Bridge from the Barclays Center in Brooklyn on Sunday, during protests that brought thousands to the streets. 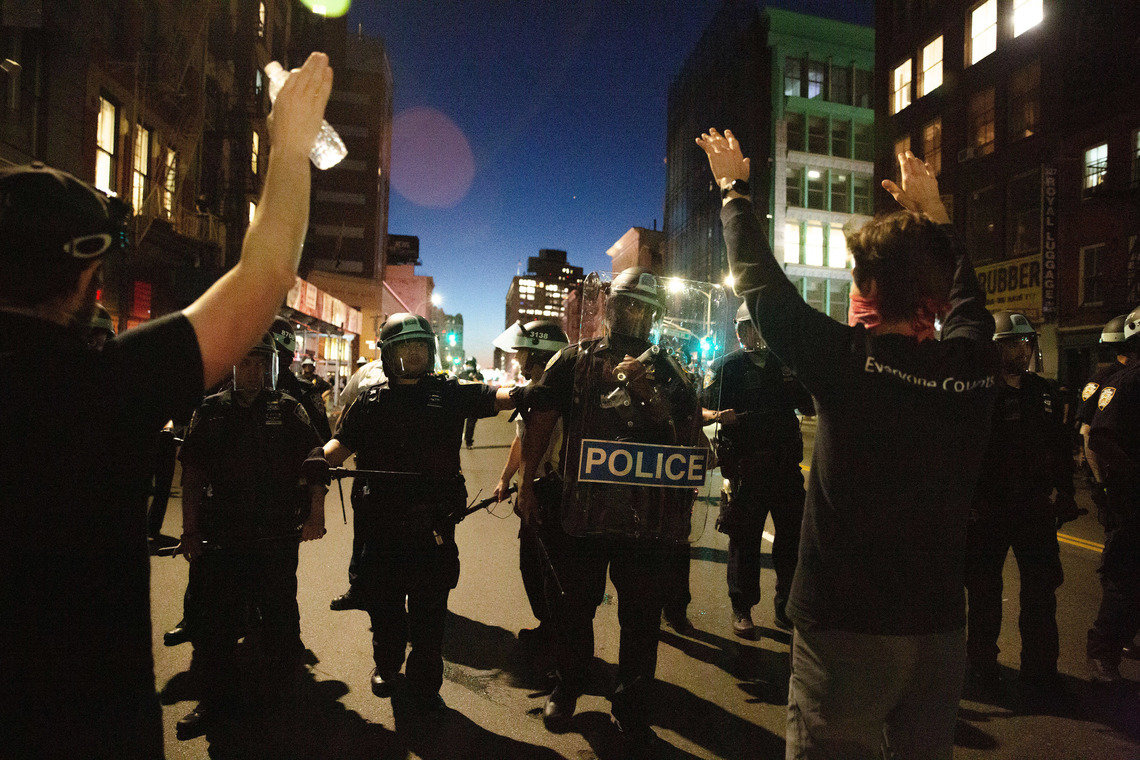 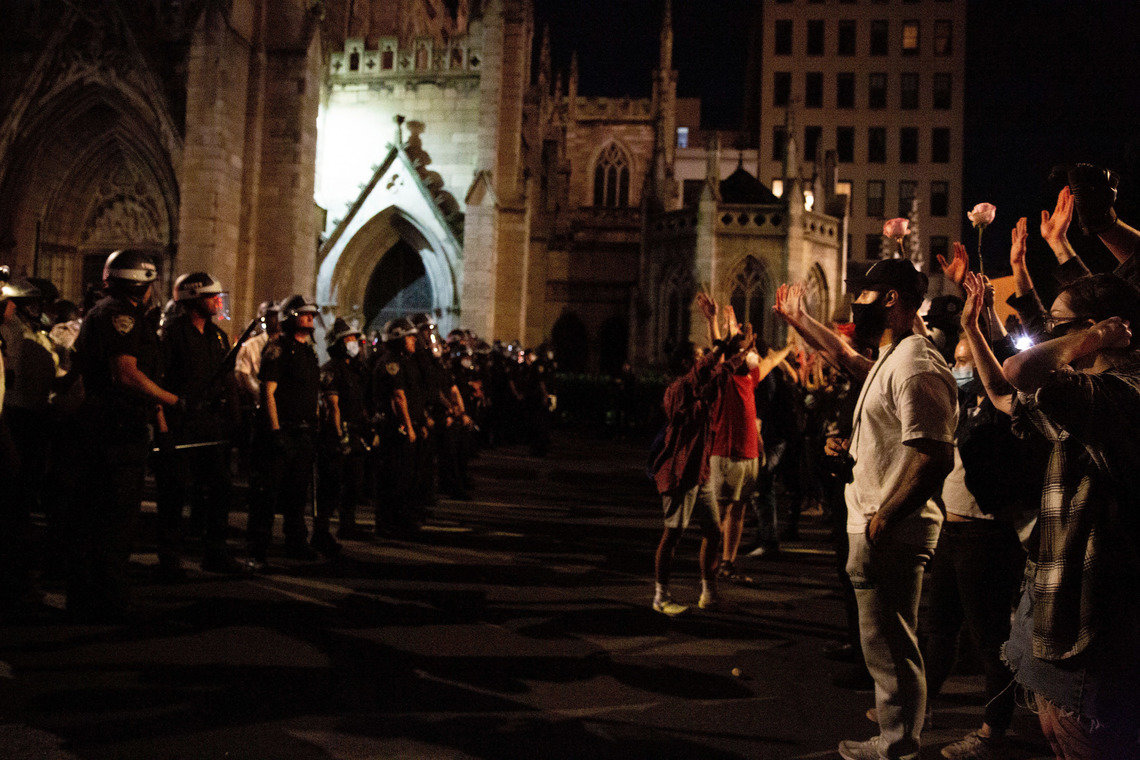 In lower Manhattan on Sunday night, police surrounded protesters and charged them with batons after announcing over a loudspeaker that the group was considered violent. Moments earlier, protesters kneeled in a moment of silence. In recent days, videos have captured aggressive tactics used by the NYPD. 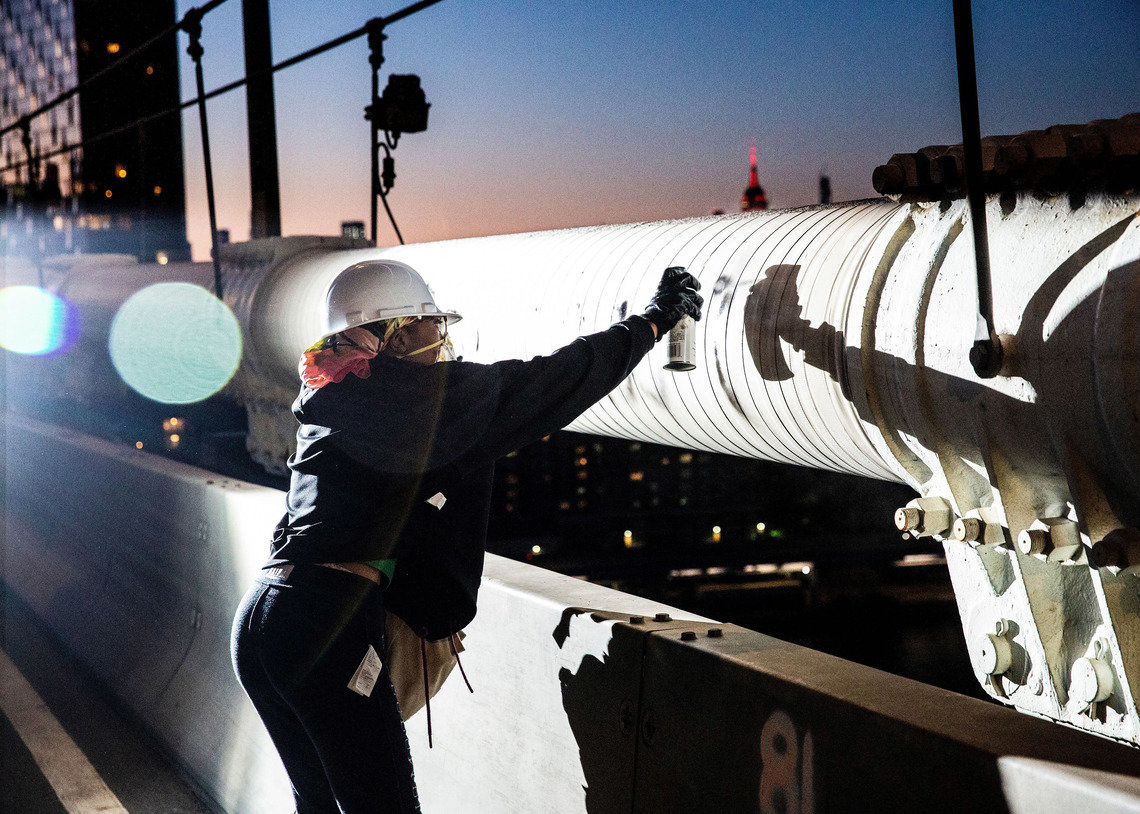 On the Manhattan Bridge Sunday night, a woman spray paints the name of Breonna Taylor, a 26-year-old black emergency room technician killed in her home by police in Louisville, Kentucky, in March. 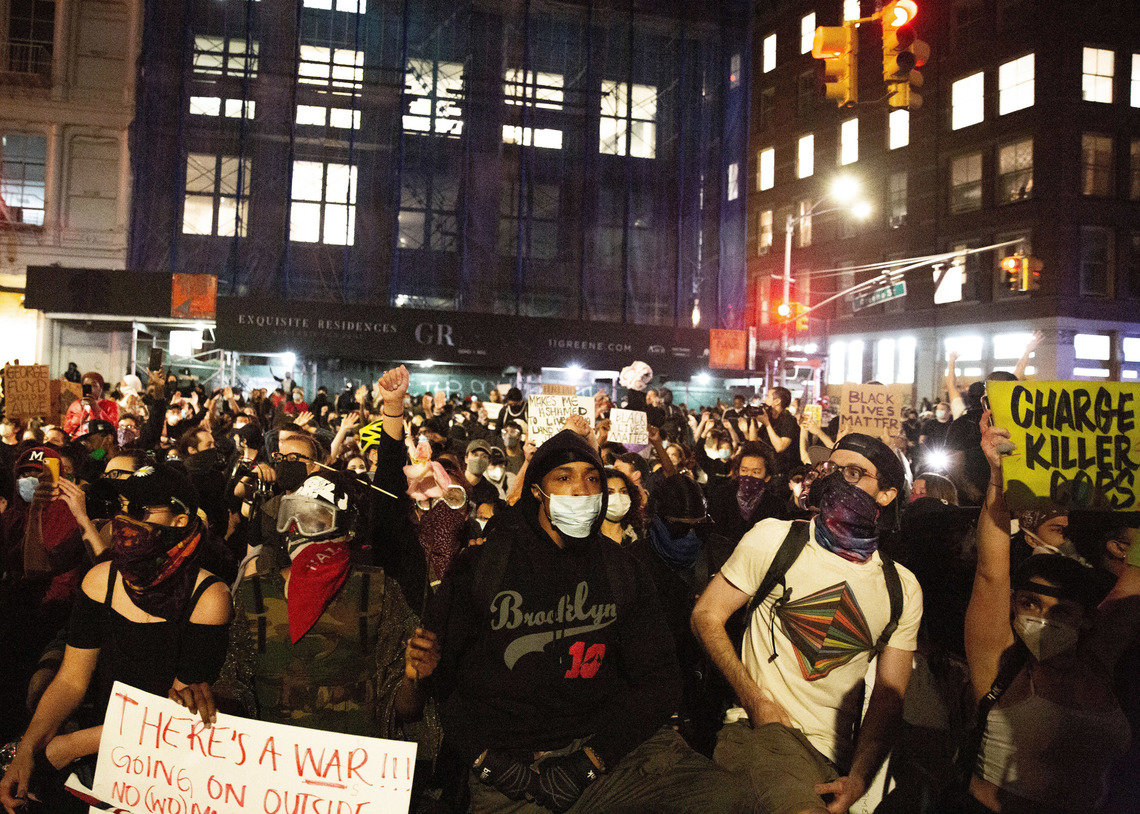 In downtown Manhattan protesters kneeled and chanted, “Say his name, George Floyd!” before taking a moment of silence. 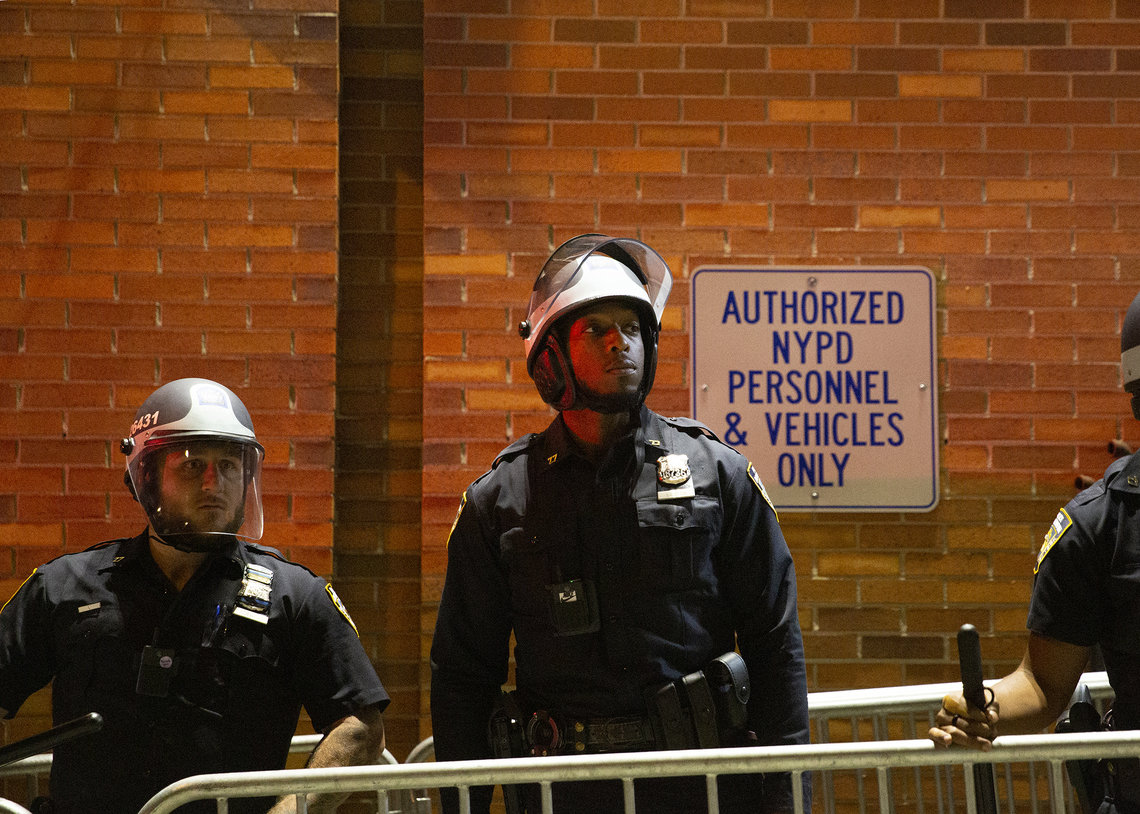 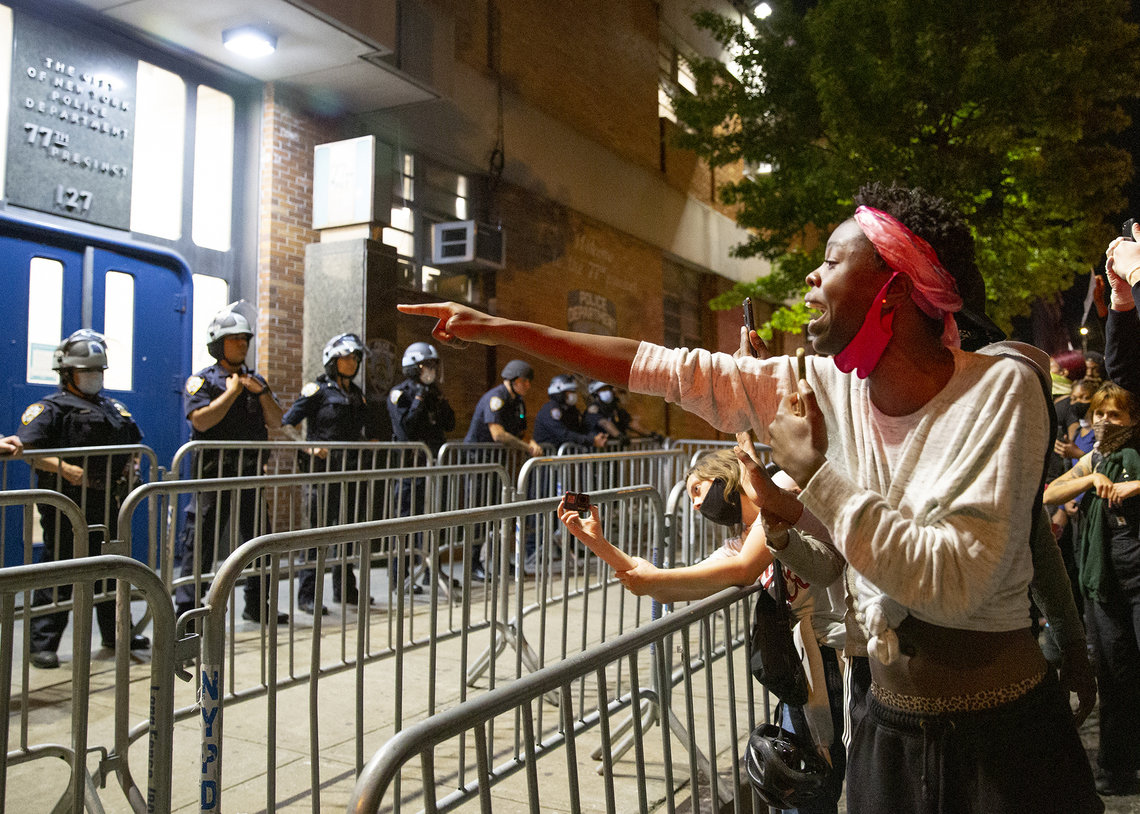 A black police officer looks into the crowd at the 77th Precinct in the Crown Heights neighborhood of Brooklyn on Monday evening as a protester yells toward him, “You’re a traitor.” 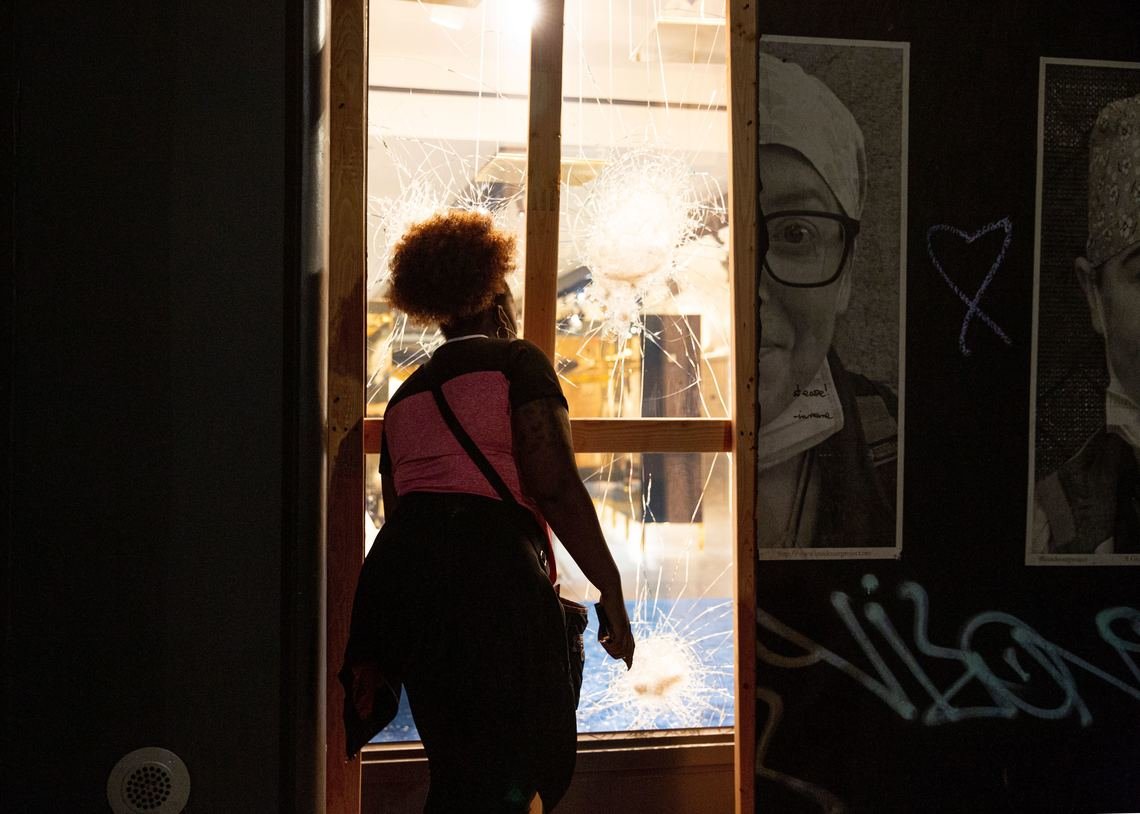 A woman looks through a smashed store window in Soho on Sunday evening. It was one of several retail businesses vandalized or looted. On Monday, major Manhattan stores like Nike and Macy’s were also looted. 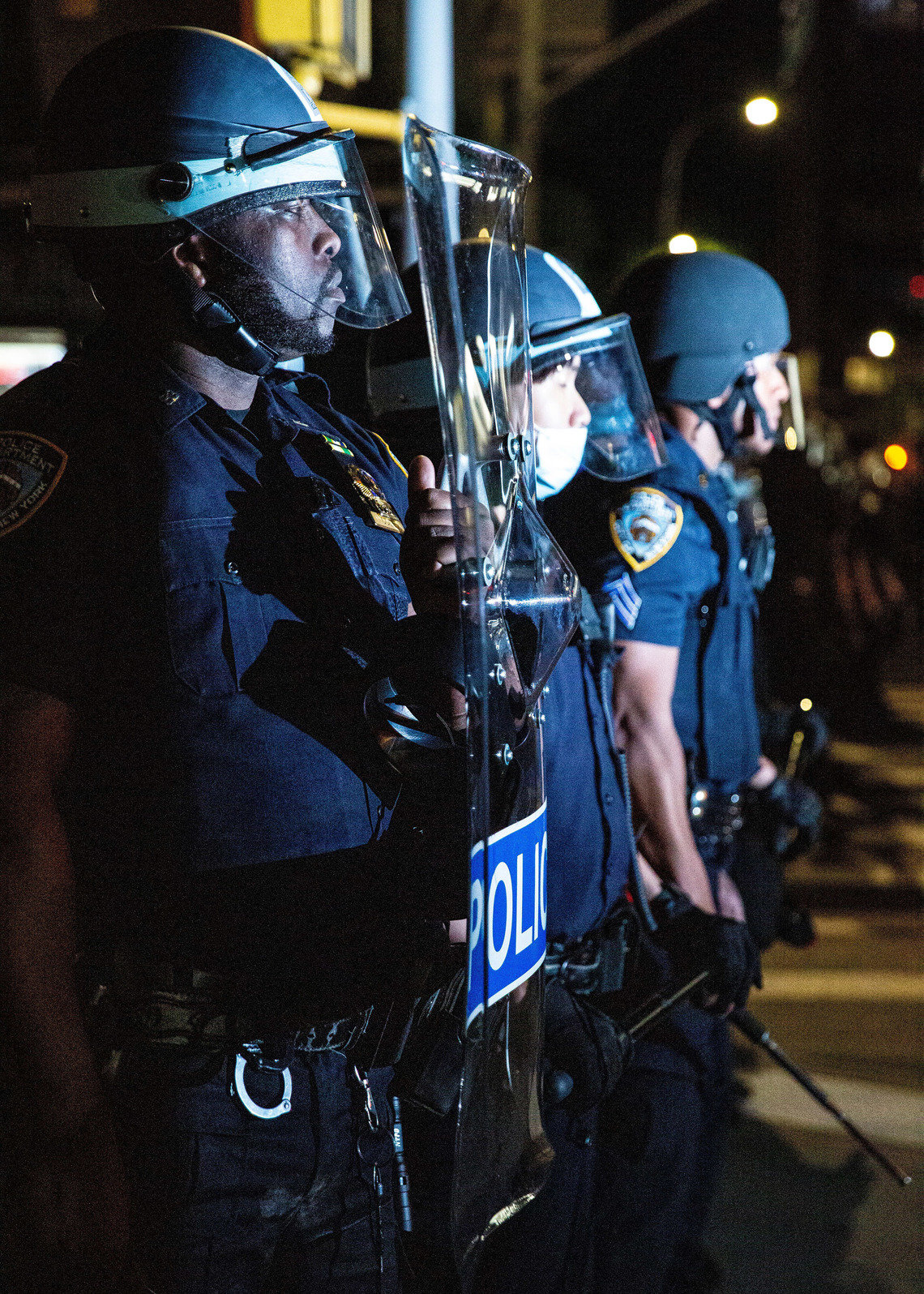 Police formed a barrier surrounding protesters after ordering them to disperse. Demonstrators chanted “Let us through,” and then “March with us.” 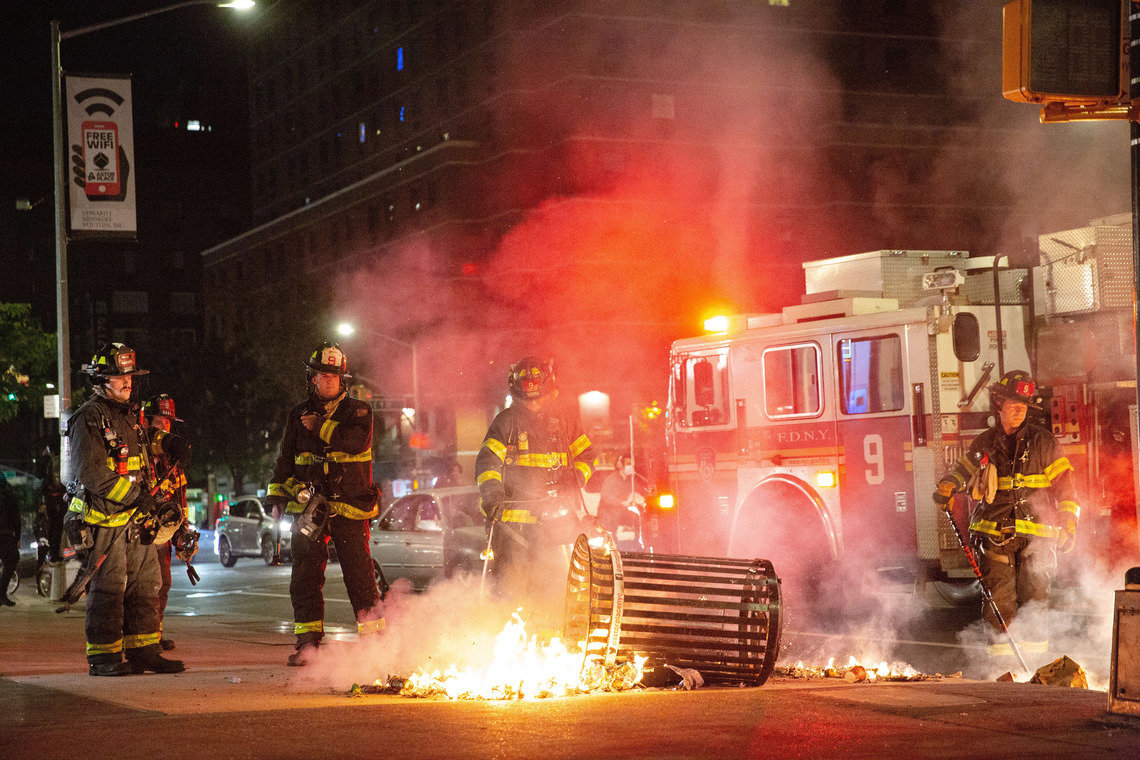 Firefighters put out a trash fire in Greenwich Village during protests on Sunday evening.