Shame Is Ever-Present When You’re Sitting in a Cell

Between a strained relationship with my family and the death of a good friend, I’ve struggled to feel like I’m worth something. 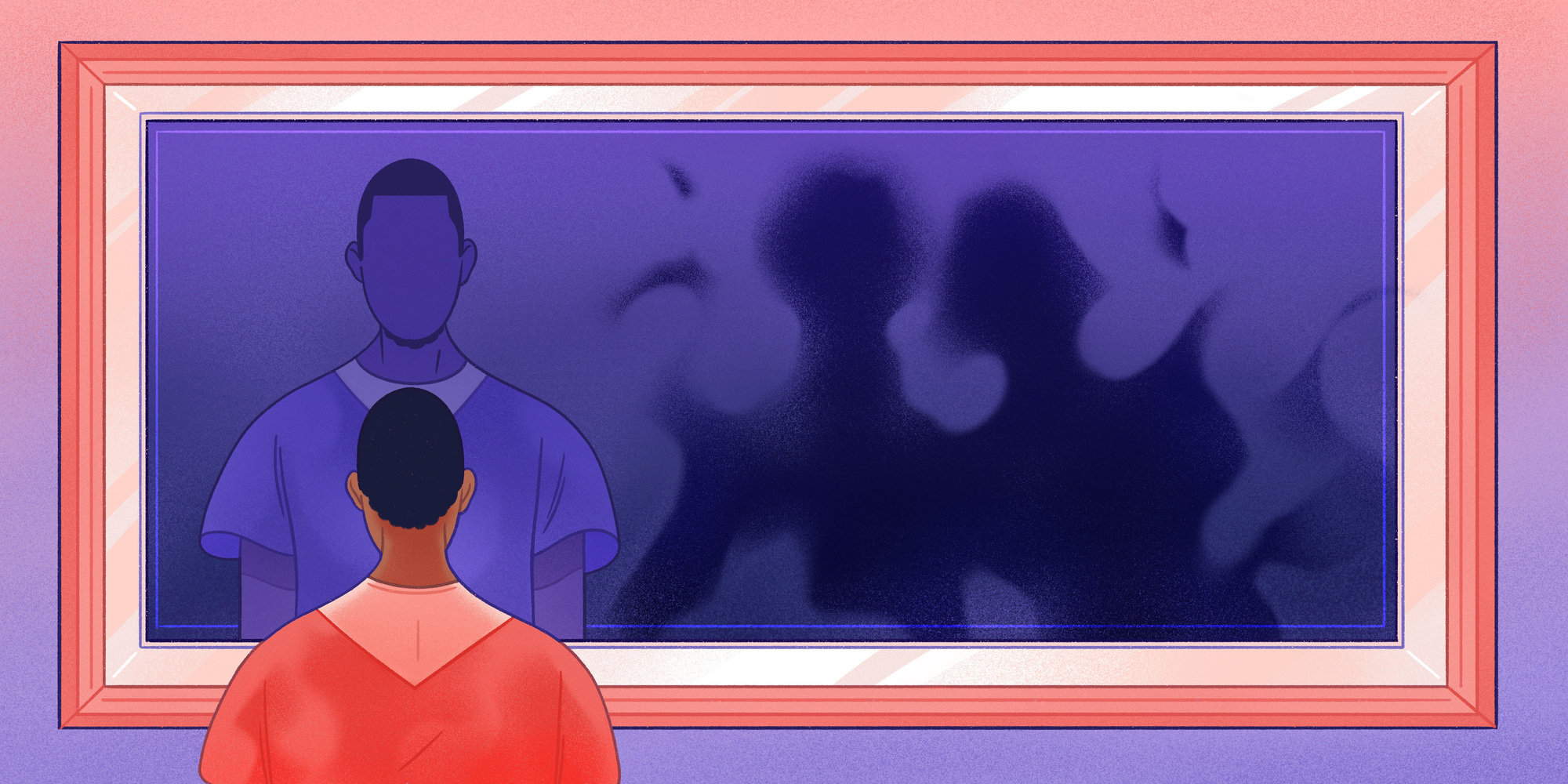 Olivia Fields for The Marshall Project
By Demetrius A. Buckley
Perspectives from those who work and live in the criminal justice system. Sign up to receive "Life Inside" emailed to you every week.

It’s 2015. Sitting in a single-man cell, the toilet approximately three feet from my bed, I surf through the few TV channels available to me until I find a show that can force laughter out of me. Mostly, I watch family sitcoms to feel at home. Sometimes I even imagine that I’m in a plotline, as a distant cousin with a dangerous past. The father sits me down and advises me to change.

In real life, I was kicked out of my house at 14. I started selling crack from an abandoned loft, wondering—in between collecting crinkled-up cash—how I could get my mother to love me.

Sighing through the commercial breaks, I flip to the local news where a Black woman in a pink dress reports the weather. The forecaster is talking about how her grandmother was one of the few African Americans in the ‘60s to report for that station. She is proud of following in her forebearer’s footsteps. She is the kind of person other Black folks are proud of.

Shame is ever-present when you’re sitting in a cell, and I wonder where I fit in the Black diaspora. I am a Black man who murdered another Black man. I was involved in gangs and I cannot physically be there for my child. These factors put me in a category in which little but my body is visible to anyone.

Soon my cell door opens automatically and I weave through the hall, nodding my head at the homies behind their steel doors. I make it to the officer’s desk and hand him my work pass for the library. He snatches it from me, his face red and bunched up like a bulldog’s.

Part of my rehabilitation is tricking the ego into passivity. This officer thinks that I’m scum that has been removed from society and placed before him. I feel spit and rage bubbling up in my throat, but I smile, trying to lessen the impact of my melanin on him.

Working in the library has its advantages in a maximum-security prison. It’s a small rehab center supplying legal information and gossip. I see my homeboy Dre walking into the room behind a few other inmates. He’s 5 feet 10 and stocky with braids. On his best days, he has a beautiful confidence. He smiles before throwing up his hands: “Wassup, fam?!”

I dap him up and there’s a genuine cheerfulness between us, even though when we were growing up in Detroit, we belonged to a hopeless kind.

We share a chuckle about his mom’s behavior. Dre is from Detroit’s East Side and started gangbanging around 13. That way of life ended up with him hiding in somebody’s backyard, nine bullets sizzling inside his body. He’s a Crip; he’s also a father, a family man and someone who cares for others.

I fudge my answer a bit, skipping over the part about how no one usually responds my calls or my letters. “I ain’t talk to them in a minute,” I simply say.

I suddenly wish I was back in my cell watching my TV family. I break eye contact with Dre but manage a smile. “Shit straight, though.”

“Don’t trip, my nigga,” Dre says. “My people do the same disappearing act. It comes with the territory.”

After I’m released from my work assignment at the library, Dre and I hit the walkway. He starts ranting about needing to get back in court because 54 years is too much time for a simple robbery. We also talk about how, when we’re out of here, he’ll have his own private investigation firm or be a paralegal. I’ll publish books. Maybe we’ll go into business together and help people back in prison get rehabilitated.

It hits me as we stroll through the compound how much untapped positive energy this Black man and I have. Then we chuck deuces as we go our separate ways.

Fridays are my off days, my time to read, write and watch more TV. I also get one hour out of 24 to leave my cell. I go to the yard and play in three basketball games before having to go back in. I’m so out of shape, my lungs feel like they’ve been dipped in acid.

It’s been awhile since I’ve talked to my mother. We “spur-of-the-moment talk,” is how she puts it.

But walking back from rec, I stop at the phones and dial her up. An automated voice comes on saying the call will be monitored, then I hear “Hey boy!”

“I miss you too. I got my new boyfriend on the line. He want to talk to you.”

I hear a man’s voice now. “Hey man,” it says. “Don’t you know you putting her through a lot? You in and out of the hole all the time. You in there acting a fool.”

He says this after knowing me for two short conversations, this being the second.

I hang up before I say something I shouldn’t. I didn’t get to have more than a word or two with my mother, but, ego into passivity.

Back in my cell, my thoughts bounce off the walls like bullets. I look at my poems and short stories and the books and magazines scattered in my foot locker. This is my second chance, my rehabilitation, right? I add to my mental checklist of what my “kind” is: someone with no family.

Many weeks later I arrive at work unfocused, but I follow my routine: I stack books, organize paperwork, write down dates. I look for Dre, hoping to tap into some of his strength. I haven’t seen him in a long while.

Finally, I see someone who looks like him, but he is slimmer in the face and body and his skin color is fading. This person hunches, drifting. “Wassup, Meech,” the man says. It’s Dre.

I reply, “What’s good, Dre?” I want to ask him what’s going on with his body, but there are ears all around us. I walk around the counter and shelve some books, secretly examining what prison has done to my good friend.

He peruses books and doesn’t say anything more. I become busy, too.

My shift ends and the officer pats us down before we step out into the cold Michigan air.

“Yeah man, I got a little sick. You know how it go. My body been fucked up ever since I got shot.” He lifts his skeletal face toward me. “Don’t worry though man, I’m good. Wassup with you?

All I can do is think about his destroyed body, but I summarize my brief conversation with my mother’s boyfriend.

“Why they keep playing with your meds?” I ask after awhile, knowing that his treatment in here has been inconsistent.

“It cost, I guess. Why keep a worthless nigga alive?”

The sidewalk splits us into our own paths, directing us back to our units.

“Love!” I throw up his gang sign, which I have no business doing. I want to be the judge who releases him, the doctor to give him the good news. But I am a worthless nigga, too.

Weeks pass. The administration, for some mysterious reason, moves me to Five Block, which sits in the middle of the compound. From there you can see the school building, where inmates go to attempt rehabilitation and brotherhood.

I stand by a fence to catch a few of the homies headed there. As they pass by, laughing and dissing and ranting, I hear a combination of words: “You know Dre died?”

My legs give a little. The wind plays on the moment. I have to hold on to the fence. I can’t breathe.

I don’t want to be dramatic, but something jumps into me—or out of me. I exhale, the terror sounds of prison echoing through me. Another group shuffles past and I hear Dre’s name amid a stream of stories. The facility let him die, I hear. He didn’t get his meds.

Soon it’s nighttime and I can’t sleep. I add to my list of what “my kind” is: Black, useless, incarcerated, no family, and now, no friends. If I ever make it out of prison, I might just be one of a kind.

Demetrius A. Buckley is a poet and fiction writer. His work has been published in The Michigan Quarterly Review, RHINO, The Periphery and Storyteller, and he received an honorable mention in a Pen America writing contest. He's currently working on a novel, "HalfBreed," and more ways to reach his community. He is serving a 20-year sentence for second degree murder at Baraga Correctional Facility in Michigan.

Baraga Correctional Facility and the Michigan Department of Corrections did not respond to requests for comment before press time.