I’ve Been Strip-Frisked Over 1,000 Times in Prison. I Consider It Sexual Assault

Strip-searching us for contraband is a perfectly legal way to rob incarcerated people of our humanity. 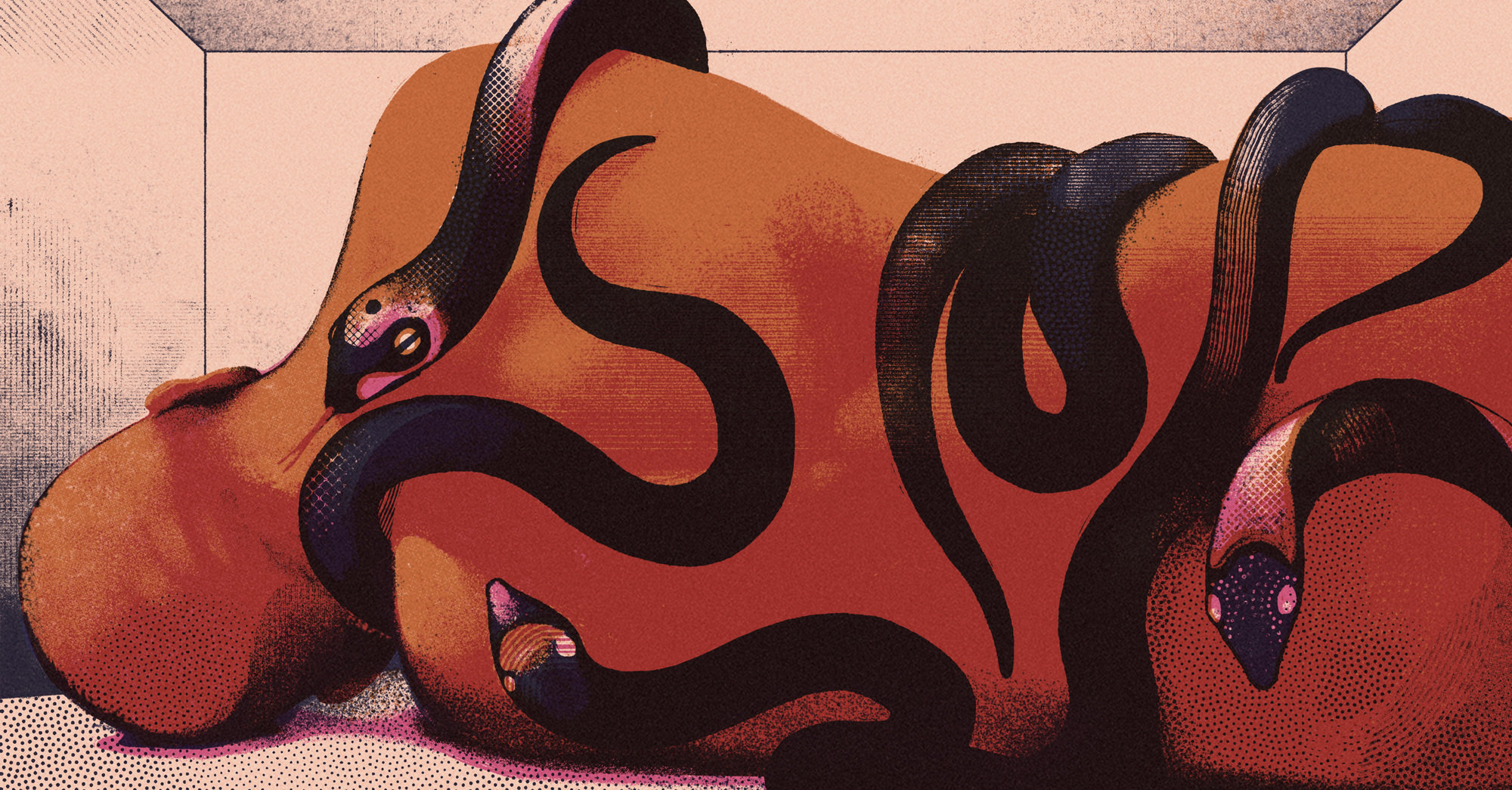 Juan Bernabeu for The Marshall Project
By Corey Devon Arthur
Perspectives from those who work and live in the criminal justice system. Sign up to receive "Life Inside" emailed to you every week.

In my 43 years of life, I've been strip-frisked over 1,000 times. New York State Department of Corrections and Community Supervision Directive 4910 says strip-searching us for weapons, drugs and other contraband is lawful. I say it’s sexual assault and rape. This is my story, and the walls where this violence happens are my witnesses.

The first time I was sexually assaulted by way of strip frisk was in 1992, when I was arrested and charged with menacing. I was 14 years old. Two police officers took me to a secluded holding cell inside the 75th precinct in East New York, Brooklyn, and told me to strip. Their uniforms, utility belts and night sticks asserted their claim to my boyhood. “Fuck the police” and other such scrawls on the walls assured I was among many who had stood there.

At first I thought they just wanted me to strip to my boxers. But after I took off my shirt and pants, one of the officers yelled, "Boxers. Take ‘em off!” His partner chimed in, “Do it right now!”

I was so scared, I couldn’t comprehend how to strip naked in front of two men or why I had to do this. Motionlessness was my response. That provoked more shouting from the officers. The situation escalated into them shoving me and pressing my face against the wall.

After I lowered my boxers, they made me face them and lift my penis and testicles. Then they ordered me to turn around, bend over, spread my buttocks and expose my anus for their inspection.

At some point, I noticed more graffiti: “NYPD loves big black dicks.” Before I left the station 72 hours later, I wrote my own message on a cell wall. “Fuck the Police.”

Back home, I asked around about the practice of strip-frisking. Street corner thugs I knew swore it was a standing prison tradition. My conclusion—that law enforcement could strip-search me whenever they deemed it necessary—chipped away at my dignity and personhood.

I was 16 when I learned that, inside prison walls, they did us in groups. I had been sentenced to one to three years for selling drugs and sent to Downstate Correctional Facility for processing. There were hundreds of us there from our respective county jails.

The guards lined a group of about 20 of us up against a wall. It looked like a beef factory where mostly men of color were the cattle. They commanded us to strip, took away our clothes, and barked various orders.

“Stick your fingers in there and stick out your tongue!”

“Lift up your arms and show us your armpits!”

“Show both sides of your hands and behind your ears, too! Toss your hair so we can see what ya’ got in there!

“Lift them feet up and wiggle them toes!”

Then, from one guard came the threats: “Listen closely: If any of you fuck this up, my stick is gonna get some action. Bend over at the waist and spread ’em. You stay there and don't move, until I say!”

Like most of the men who endured being sexually assaulted via strip frisk by armed guards, I obeyed. The few who refused submission were taken away. Something awful happened to them in private. I didn't know what it was until years later, when I resisted.

I crashed into another wall at age 19. By then I was serving a sentence of 25-years-to-life for robbery and murder in Attica Correctional Facility. Seeing my family and friends meant being sexually assaulted by strip frisk after each visit. So I began alienating my loved ones.

But I got stripped-frisked anyway, during facility shakedowns and fights in the yard that I had nothing to do with. It happened whenever a guard felt there was a need for him to search my naked body in the name of security. No matter what, my back was against the wall.

So I reversed my decision about visits and spent time with two lady friends of mine. They wanted to know why I asked them not to come for so long, but I avoided answering them out of shame.

One of my friends noticed that I became distant and edgy during our time together. Her concern compelled me to open up about how I would be strip-frisked after they left. “Why would they do that?” she asked. “We didn't do anything wrong.”

I explained that it was customary, but my friends couldn't understand why officials treated us like animals when there were advancements in technology, like the X-rays and body scanners used at airports.

After we discussed the process a bit more, including the possibility of body cavity searches, my friends chose to share their experiences of rape and sexual assault with me. They concluded that the forced penetration of a cavity search was no different from what had happened to them.

Then, one friend challenged me to “do something about it.” I tried to deflect my predicted defeat by saying, “I put myself in here.” She shot back, “You're a human being! No one deserves to be treated like that for any reason.” She left with a mixture of our fallen tears.

That visit made me realize that just as rape begins from the same source, it ends in similar destruction. The common source is the innate human impulse to dominate. My lady friends were victims of some sick assholes in free society. I was the victim of an inhumane criminal justice system. Their attacks were personal and perversely intimate. Mine were procedural and systemic.

In an attempt to salvage my dignity, I looked up strip-frisking in the law library. I learned about Directive 4910 and how it did, in fact, instruct prison guards to do invasive searches for contraband. The most shocking aspect was how a prisoner could be anally probed if guards deemed it necessary. I compared Directive 4910 to statutes about sexual assault and rape. The similarities left me more of a wounded animal than a victimized person.

Fortunately, I stumbled into the words of a man who could restore humanity in anyone.

“Don't let anybody take your manhood.” That's what Dr. Martin Luther King Jr. said in a speech on racism and self-determination. Dr. King gave me an idea: I would refuse being strip-frisked. I would tear down that wall.

In November of 2002, coming from a visit, there was just one guard and me. We breathed each other’s filth in the tiny 6-by-8 stall bordered by three cinder block walls and a privacy curtain. The wall was painted a bright white. The privacy curtainwas dirty and rust red. It was just right for the assault that would happen in private.

“No,” I said. I was so scared and worked up, that was all I could manage. It felt like going into a fight you know you’re going to lose.

Soon, several more guards armed with batons ran into the room, jumped me, pinned me down and cut off my clothes. I fought back as hard as I could, but gloved fingers penetrated every hole in my body. It was no longer about searching for contraband. The true nature of the strip frisk had finally surfaced. Snuffs to my face and body were followed by well-placed shots from closed fists, snot and slivers of spit. My blood was the only thing that didn't feel disgusting.

When they were done I laid on the blue rug, naked, handcuffed and bruised. Only a technicality kept me from going to the box. But it was too late. Something worse had taken place. A monster had been made, courtesy of Directive 4910.

Corey Devon Arthur was born in Brooklyn in 1977, and has been incarcerated since 1997 for robbery and murder. He has earned a legal research certification and studied through Rising Hope and Nyack College. Arthur is currently serving his second term as chairman of the Inmate Liaison Committee at Fishkill Correctional Facility. He's a proud member of Empowerment Avenue, a collective of incarcerated writers. Arthur is also passionate about drawing and is currently working on a trilogy of short stories.

Thomas Mailey, spokesperson for the New York State Department of Corrections and Community Supervision (DOCCS), did not comment directly on Arthur’s comparison between standard strip frisk procedures and sexual violence. In an email, Mailey released this statement, which has been edited for length and clarity:

All filed grievances and complaints are thoroughly investigated by the Office of Special Investigations[.] … [The] department continually conducts policy reviews and has been fully accredited for over 30 years by the American Correctional Association (ACA).

… [T]he type of behavior Mr. Arthur is alleging would not have been condoned then. However, DOCCS today is much different than it was 20 or 30 years ago. We know that if the alleged behavior occurred today, the incarcerated individual would have multiple means to file a complaint. The allegation would be investigated and if found true, result in discipline, including termination, and a referral for criminal prosecution.