During the pandemic, video chats replaced in-person visits between parents and their children placed in foster care. The effects could linger for years. 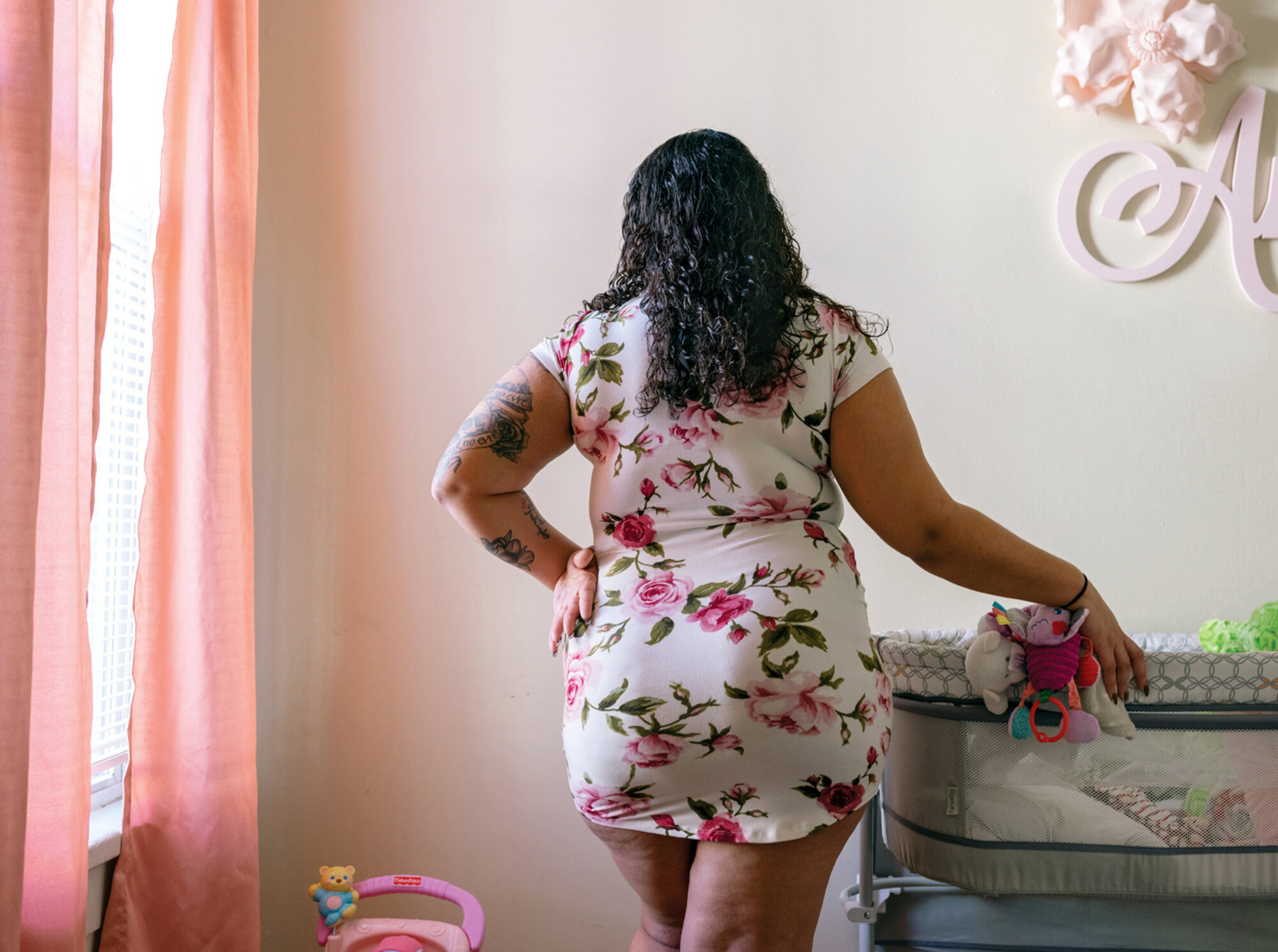 M., 23, stands in the room she has prepared for her daughter at her home in Massachusetts in March of 2021. Since her newborn daughter was placed in foster care, M. has been forced to bond with her primarily through Zoom. Rania Matar for The Marshall Project
By Eli Hager
Coverage of the COVID-19 pandemic, criminal justice and immigration.

In June 2020, M., a community college student in Massachusetts, checked into the hospital with intense stomach cramps. Within hours, M., who didn’t realize she had been pregnant, unexpectedly gave birth — a phenomenon doctors call “denied pregnancy.”

Soon after the delivery, M. started panicking — she hadn’t prepared for single parenthood. When her baby was moved to a different hospital for specialized care, M. didn’t follow and went home, alone. But a few days later, after an emergency session with her therapist, she built up the confidence to return to the hospital, ready to be a mom.

This story is a collaboration with The 19th, a nonprofit newsroom covering gender, politics, and policy.

It was too late: The state Department of Children & Families had already taken M.’s daughter into foster care. And because of the pandemic, she was told that her first official visit with her newborn would be more than a month later — by Zoom.

“It's just impossible to bond with her over the screen," M. said. "Ever since, I've been asking basically, ‘Can I hold my daughter?’"

When state child welfare officials place kids in foster care due to parental neglect (as long as there’s no physical or sexual abuse), their parents are typically entitled to regular, supervised in-person visits that allow hugging, playing, and, in the case of newborns, breastfeeding. But as the pandemic raged last spring, these visits went virtual in all 50 states, forcing thousands of new parents to attempt the impossible: bonding with their children — even infants in some cases — over video chat.

Recently, The Marshall Project posted questions on national listservs of family court lawyers, asking how these virtual visits have been going over the past 12 months. We received dozens of responses, overwhelmingly negative, from advocates for parents and children alike.

Babies and toddlers already have a hard time sitting still, lawyers and parents said, and on video calls, they are easily distracted. The children are often so young they can’t even grasp that the person on the screen is their parent. Making matters worse, many virtual visits suffer from poor connections, as mostly low-income parents try to Zoom in on phones with spotty internet service.

For parents, the experience can be crushing. Some rattle noisemakers to try to get their baby’s attention; others hold up food as a kind of lure. “Can you look at Mommy and Daddy?” one mom said she frequently tells her daughter. “We’re still here. We still love you.”

Parents trying to talk to their baby over a video call. Courtesy of Connie Reguli

The stakes of such visits couldn’t be higher: Judges look for evidence of bonding when deciding whether to reunify families. If parents can’t persuade the judge that they have connected with their kids over Zoom, their chances of getting their child back fade.

“We may have a generation of children who could not reconnect with their parents because of this pandemic,” said Judge Aurora Martinez Jones, a family court judge in Austin, Texas.

Judges typically work with caseworkers to set the frequency of family visits and whether they'll happen face-to-face. Over the last year, Jones said she has been trying to strike a balance between the physical risks of in-person visits and their psychological value for parents and children.

The science is clear that touch and smell are crucial for parent-child bonding. Babies can lose their mental image of their parents within weeks of being separated, which stalls brain development, according to pediatricians and child social workers. A pretend hug over video, research shows, is essentially unrecognizable as a hug to an infant.

“Suspension of supervised visits has the potential to cause permanent harm to affected children,” said Molly Romer Witten, a child psychologist with a Ph.D. in educational neuropsychology, in an affidavit filed in Chicago last April.

After M.’s first Zoom visit last summer, a caseworker told her that she would be allowed to start interacting in person with her baby at least once a month — but only if they could meet outdoors, weather permitting. If there was a chance of rain in the forecast, emails and text messages show, the visits were canceled and moved back to Zoom, despite M.’s pleading that they hold them in a covered outdoor area.

At one point, M.’s lawyer, who works for Massachusetts’ Committee for Public Counsel Services, asked what the Department of Children & Families could possibly expect of M. on a Zoom call with an infant, according to emails and notes taken by the lawyer and shared with The Marshall Project. A caseworker responded that M. should ask her daughter’s foster parent lots of questions about the child’s health and daily routine.

“So it is actually a visit between [M.] and the foster parent,” not with her baby, the lawyer responded.

When M. asked prepared questions, she and her lawyer said, she was told by the caseworker that she needed to be more spontaneous.

In a statement, the Department of Children & Families said that it “recognizes the importance of visitation” and that over the summer, it “began a blend of in-person and virtual visits accompanied by guidance, with multiple ways to maintain safe and healthy contact between children and parents during this unprecedented public health emergency.” The agency, which is still conducting Zoom visits in many cases, did not respond to questions about how it is helping parents make the most of such virtual time with children, especially newborns. 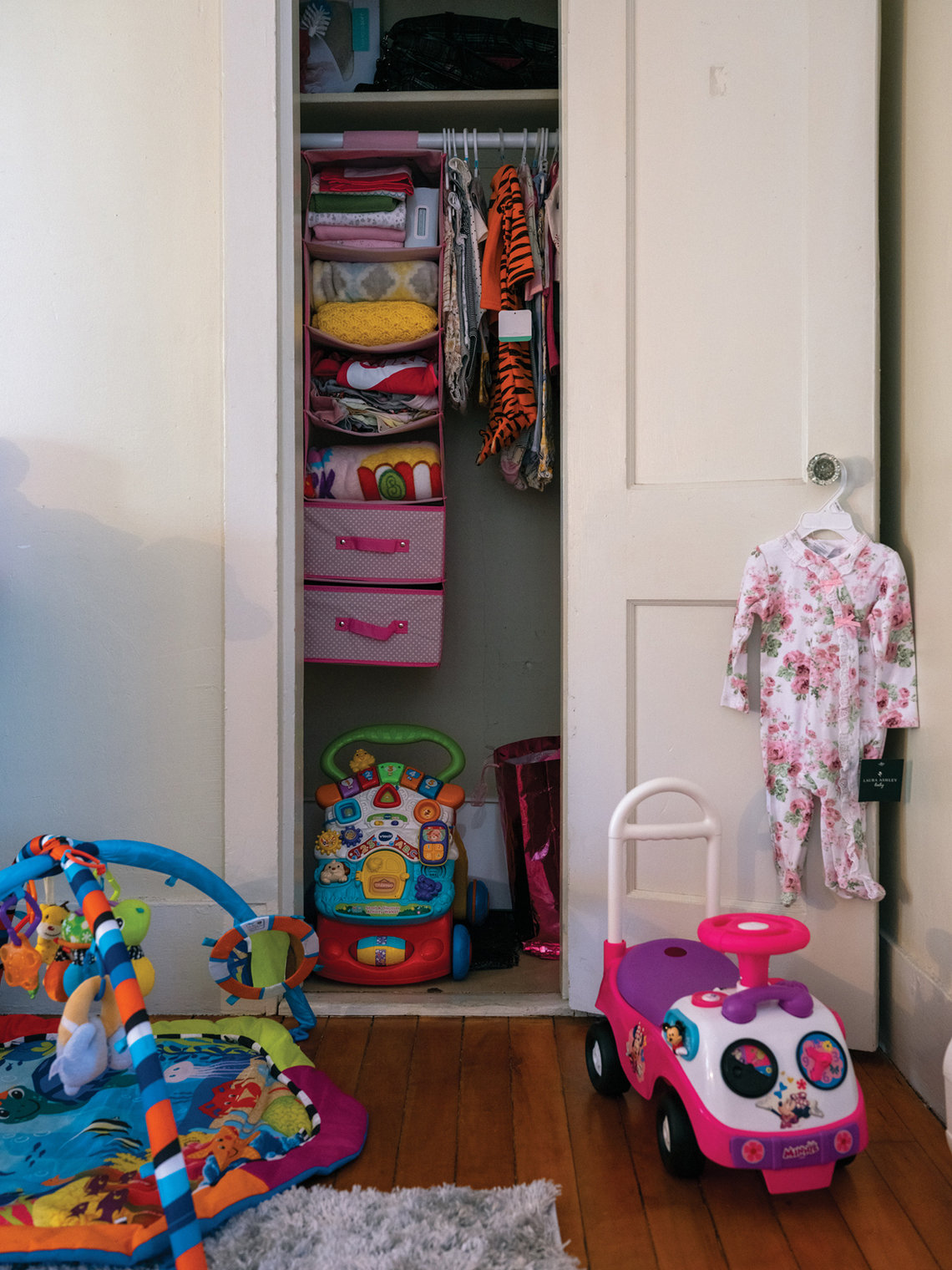 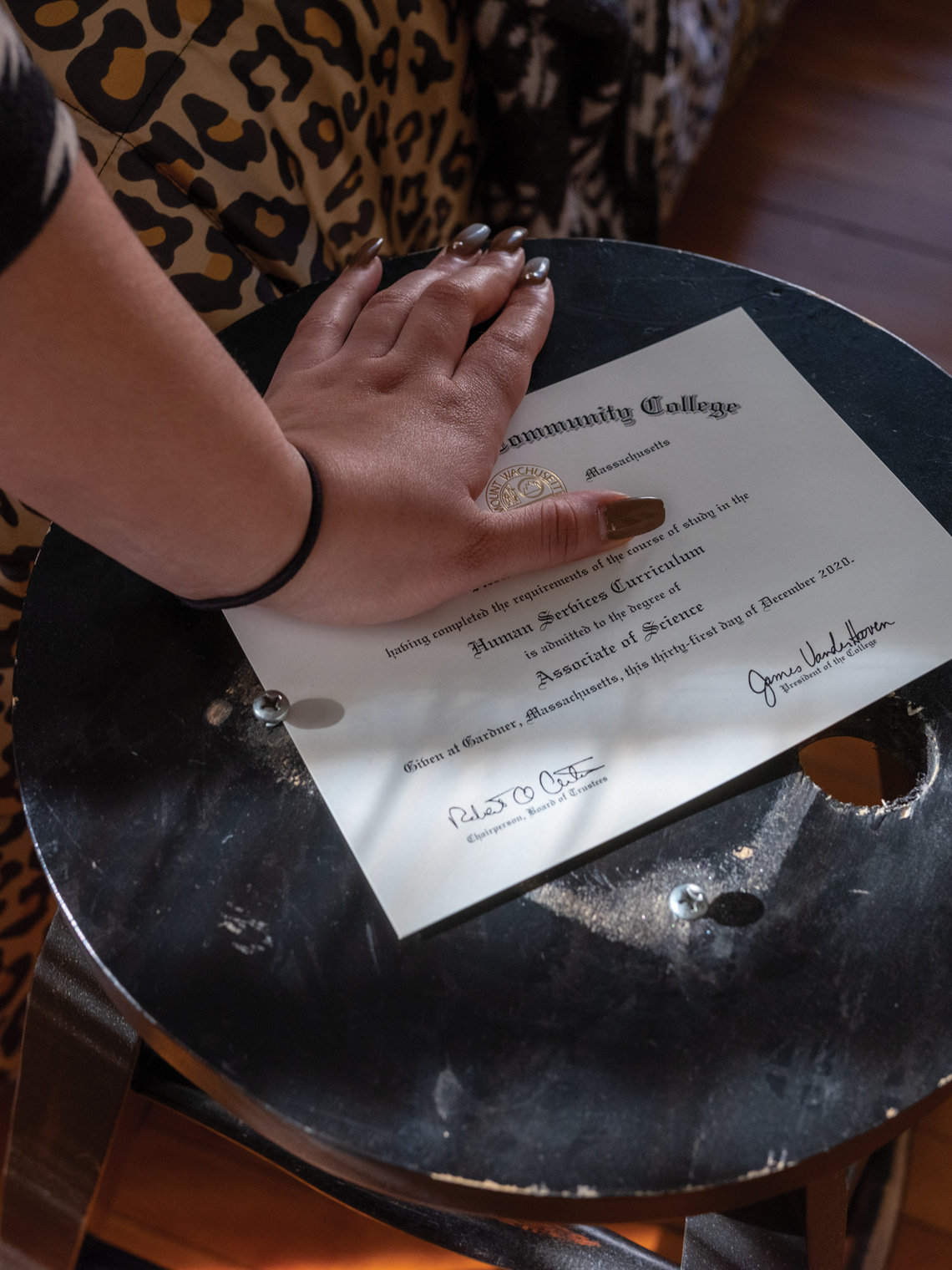 A view of the bedroom that M. has prepared for her daughter, who has been in foster care since June of 2020. Rania Matar for The Marshall Project M. shows her diploma, which she received after graduating from a local community college. Since losing custody of her daughter in June of 2020, M. has graduated college, moved into a bigger apartment, continued therapy and attended parenting classes. Rania Matar for The Marshall Project

M. has done everything the state has asked of her, records show. She moved into a two-bedroom apartment to have space for her daughter, and filled one room with a crib and toys. She graduated from community college. She remains in therapy. After every parenting class, she sends the agency her copious notes, emails show.

When rare in-person visits did take place last fall, they went comparatively well. The baby made nonstop eye contact with M. and accepted the bottle only from her, she says.

But more recently, M. says, her daughter has become bonded with her foster mom — the one who is with her on the other end of the Zoom calls, the one who tucks her in at night.

“It is making me start to doubt my self-worth as a mother,” M. said.

Even as in-person visits have gradually resumed across the country, many parents have had to prove they are quarantining in order to see their child. This has been difficult for low-income parents who are essential workers, who use public transportation and who often live with large extended families.

Meanwhile, parents (and their lawyers) say they are less motivated to attend parenting classes, complete drug treatment and do everything else that family court requires of them if visiting their kids is no longer part of the deal. Many people with a child in foster care have mental health needs or are in recovery from a drug or alcohol addiction, which are more difficult to overcome when you’re desperate to hug your child.

As a result, when in-person family court hearings pick up again, many parents’ rights to their children may be permanently terminated, though there is no national data yet to show whether that is already happening at high rates.

For Angel Williams and Kyle Swain of Shelbyville, Tennessee, the pandemic has complicated a long journey to bring their children home.

In 2019, the state took the couple’s two toddler-aged daughters into foster care because they had trouble keeping their house safe and clean. There were no abuse allegations, according to a court document read to The Marshall Project by their attorney, Connie Reguli. But Angel had a history of abusing alcohol and mixing it with pills she had been prescribed. Kyle is a military veteran suffering from PTSD.

By early 2020, the couple was on track to get their daughters back, according to their lawyer. They were passing drug tests and having frequent in-person visits.

Suddenly, last March, Tennessee’s Department of Children’s Services shut down all parent-child visits because of the coronavirus. So Angel asked about Zoom, which she knew about because her dad used the platform for his job.

The state agreed to video calls, but the family soon found them excruciating. Angel and Kyle tried asking their daughters, Let me see how long your hair is now, or, Let me see the boo-boo you got. But their internet connection kept cutting out.

Angel Williams tried to interact with her daughters over a video call, which had a poor connection. Courtesy of Connie Reguli

A couple of times, the girls tried to kiss the camera. But whenever they finally started to engage, it seemed, the call was almost over. “You feel so helpless,” Kyle said.

Finally, just after Christmas, the couple got in-person visits back. And full reunification with their girls is imminent, per a recent court ruling. But the parents know they face challenges after losing so much time together.

At a recent in-person visit, when one of their girls saw a video of Angel and Kyle singing “Rudolph the Red-Nosed Reindeer” to her during a Zoom call, she waved at the screen, not seeming to realize that her parents were right there in the room.

“I can see that she’s scared to trust us,” Angel said, “after we turned into images for a whole year.”