As the Monache and Cherokee 63-year-old awaits a new hearing for a 1978 murder he denies committing, Douglas Ray Stankewitz shares the cultural tools and memories he depends on to stay alive. 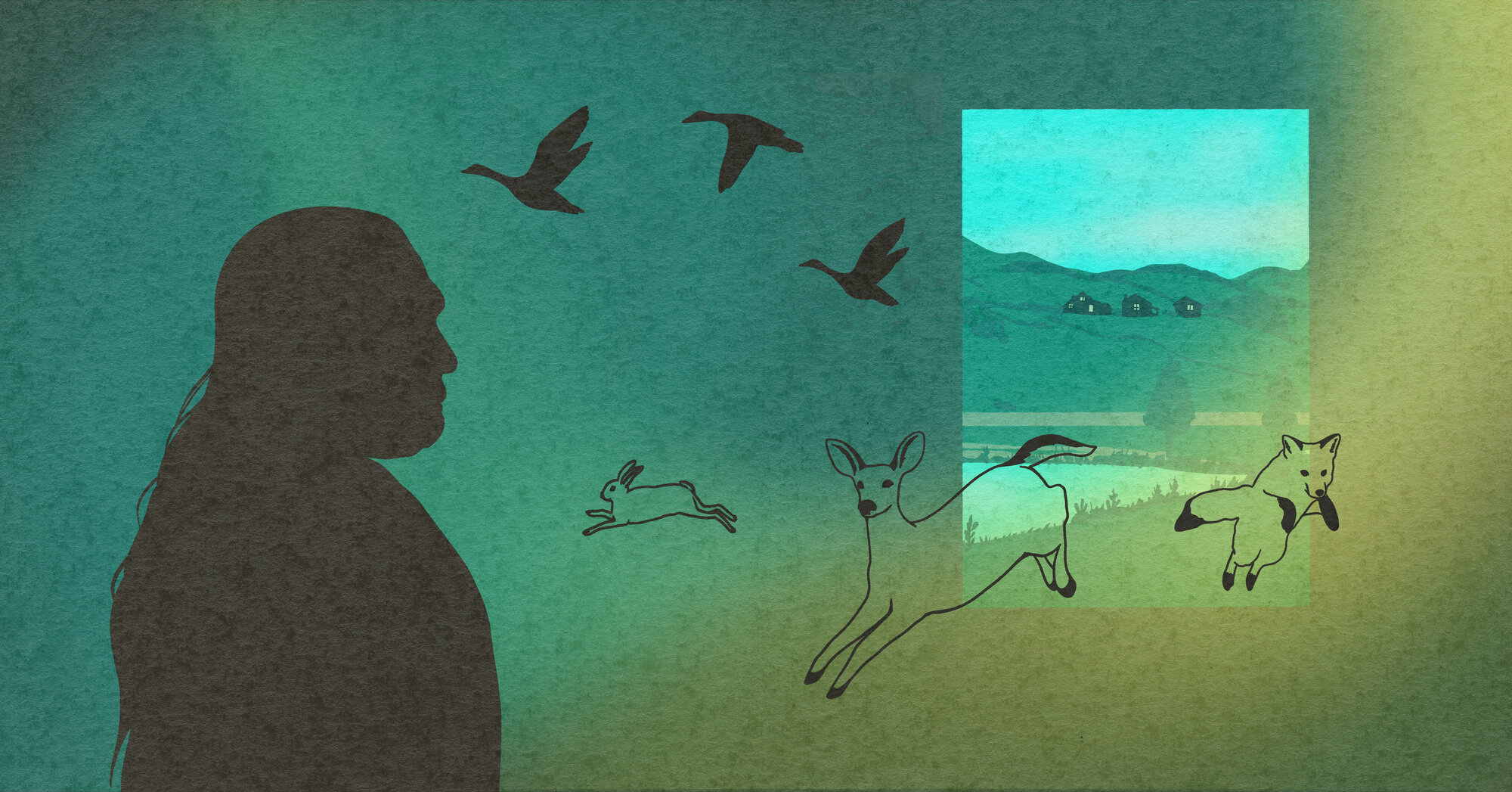 Paige Pettibon for The Marshall Project
By Douglas Ray Stankewitz as told to Richard Arlin Walker
Perspectives from those who work and live in the criminal justice system. Sign up to receive "Life Inside" emailed to you every week.

Douglas Ray Stankewitz is California’s longest-serving death-row prisoner. The 63-year-old Monache and Cherokee Indian from the Big Sandy Rancheria has spent 43 years in San Quentin State Prison for a crime he says he didn’t commit: the Feb. 8, 1978 carjacking and murder of 21-year-old Theresa Graybeal in Fresno, California. (Stankewitz says that while he was in the group of young people who initially drove Graybeal's car, he didn't carjack or kill her.)

Since his conviction at age 20, Stankewitz’s life has been a legal roller coaster. He was sentenced in October 1978 to die in California’s gas chamber. In 1982, the state supreme court threw out his conviction because there was a question about his competence to assist in his defense. A new trial in 1983 resulted in another death sentence.

In 2012, a federal appeals court ordered Stankewitz be retried or that his sentence be reduced to life without the possibility of parole, on grounds that his lawyer failed to present information about the abuse he’d endured as a child. His sentence was reduced seven years later.

His legal team then appealed the life-without-parole sentence, and in January 2021 filed what is known as a habeas petition. Both routes could result in a new hearing that Stankewitz hopes will lead to his release.

In this interview, conducted in 15-minute phone calls, and edited and condensed for length and clarity, Stankewitz describes his life at San Quentin State Prison — as a Native person and as a prisoner for more than four decades.

In the 43 years that I’ve spent in a small cell at San Quentin, I’ve felt grass under my feet only five times.

The first time was after I had spent seven years in the isolation unit because I refused to cut my hair. I’m Monache and Cherokee. They punished me despite the fact that it’s my tradition and spiritual belief as a Native American to grow my hair long.

But outside the isolation unit there was a row of grass that they really took care of. As the guards led me out of that building, I stepped off the concrete path so I could feel the grass and dirt under my feet. The smell and feel of grass is still part of me.

I'm sure most free people don’t even realize that they take something like that for granted, but it’s the little things that I cherish the most. I often think back to growing up at Big Sandy — the coyotes and foxes, the geese and deer and wild turkeys. There were 17 of us living together in three cabins, and it only cost about $80 a month to feed us. We ate venison, rabbit and turkey, and we had a garden. We always had homemade biscuits, tortillas, frybread and cornbread, and there were always beans cooking on the back of the potbellied stove. Those thoughts, along with the self-discipline I’ve developed in here, have helped sustain me.

I can say that conditions in the isolation unit have changed since 1980, when I was there for the first time. Back then, there was a hole in the floor for a toilet. The toilets were supposed to be flushed once every 24 hours, but they rarely were.

We were supposed to get 1,500 calories a day. But we got one meatball in the morning and one at night with half a slice of bread. Anytime people acted up, the guards would pepper spray them. Sometimes, guards would spray people just to see how they’d react.

Guards would also take our mattresses in the morning and give them back at night — presumably because they didn’t want inmates destroying them. But nine times out of 10 you wouldn’t get your mattress back. It would be someone else’s, and there might be feces on it or urine on it. After five times, I told them, “No, I don’t want a mattress anymore.” I haven’t had one since then. I just fold a blanket in half and sleep on it. I also haven’t had a pillow — I use a roll of toilet paper, and I’m comfortable with that.

In the death-row cells where I’ve spent most of my time, I’m still in isolation — it’s just not as bad. My current cell is roughly 4 1/2 feet by 10 feet. Along with my toilet, bed and sink, I’ve got a shelf, two lights and a typewriter. I have some CDs and a CD player with a radio. I also have some photos and eight posters of Harley Davidsons. My dad was a biker.

We do have Native worship services at San Quentin, but our religious adviser doesn’t do it right. He has a sacred pipe that he allows everybody to touch, and that’s bad medicine. You’re not supposed to touch the pipe or anything sacred like that if you have blood on your hands. If you’ve killed someone in self-defense or to protect your family or your property, that’s one thing. But if you kill somebody just to kill, it’s called having blood on your hands. That’s why I go to other worship services, so I can absorb other teachings and learn about different religions.

We used to have four powwows a year. Tribes from the Bay Area and all the way up north would offer buffalo, elk, venison and fish. Now we’re lucky if we have one powwow per year. The reason is that the religious adviser would tell the tribes we were going to have a powwow on a certain date and after the tribes caught fish and deer for it, he’d say, “Well, now we’re going to have it next month.” You can’t do that.

When we did have a powwow, we’d get a two-ounce serving of salmon and everything else would be prison food. The prison wouldn’t allow people to bring in buffalo meat because they said bones were a security risk. They could just take the meat off the bone and then bring it in, but they won’t do that. You’ve got these brothers and sisters in the free world going out and getting it for us, and we can’t have it.

Meanwhile, my daily routine is the same as it has been for decades. I wash up, make sure my cell is clean, then I say my prayers and I meditate for 20 minutes to an hour. After that, I turn on the radio, exercise, maybe type a letter and get my breakfast. I work on my case for about three hours a day. We have a law library, but you have to get on a list, so you might go once a month. Every week, we can put in requests for a law book we need. You may be placed on a waiting list for the book, but it's better than nothing.

I go to the yard with other people twice a week for a total of six hours — unless it’s foggy or there’s been an incident and we’re in lockdown. I get to shower for 15 minutes every other day with a guard standing by. Otherwise, I’m in my cell.

Since my sentence was reduced to life without possibility of parole in 2019, I have the option of transferring to a cell in the general population. But I’d have to go to a Level 4 maximum security unit where there’s a lot of violence. Other inmates would want to test me because I’ve been on death row.

I also have the option of moving to a different prison, but my legal team is in this area. I might end up 500 miles away; that would make it harder for them to come and see me when they

have to. And so, I await a court date. It could be in a month, it could be in six months. We don’t know. Meanwhile, I just try to be the best person I can be so that I’m content with myself and can go to sleep at night and say, “Well, I did a good day. I didn’t do anybody wrong, I didn’t lie to anybody.”

People have asked me, “How did you make it through 43 years in prison?” And I say, “By being Native.” Being Native gives me the strength to overcome all of this — not just for me, but for all our brothers and sisters. Society cannot break our spirit.

Richard Arlin Walker, Mexican/Yaqui, is a journalist and author living in Anacortes, Washington.

The California Department of Corrections and Rehabilitation did not respond to requests for comment.