My Son Alex Was Murdered at 21. Grief for Me Has Been Hurt, Anger and Bitterness

I’d put up reward posters, hoping somebody would say they knew what happened. Someone knew something, but they just wouldn’t give me any answers. 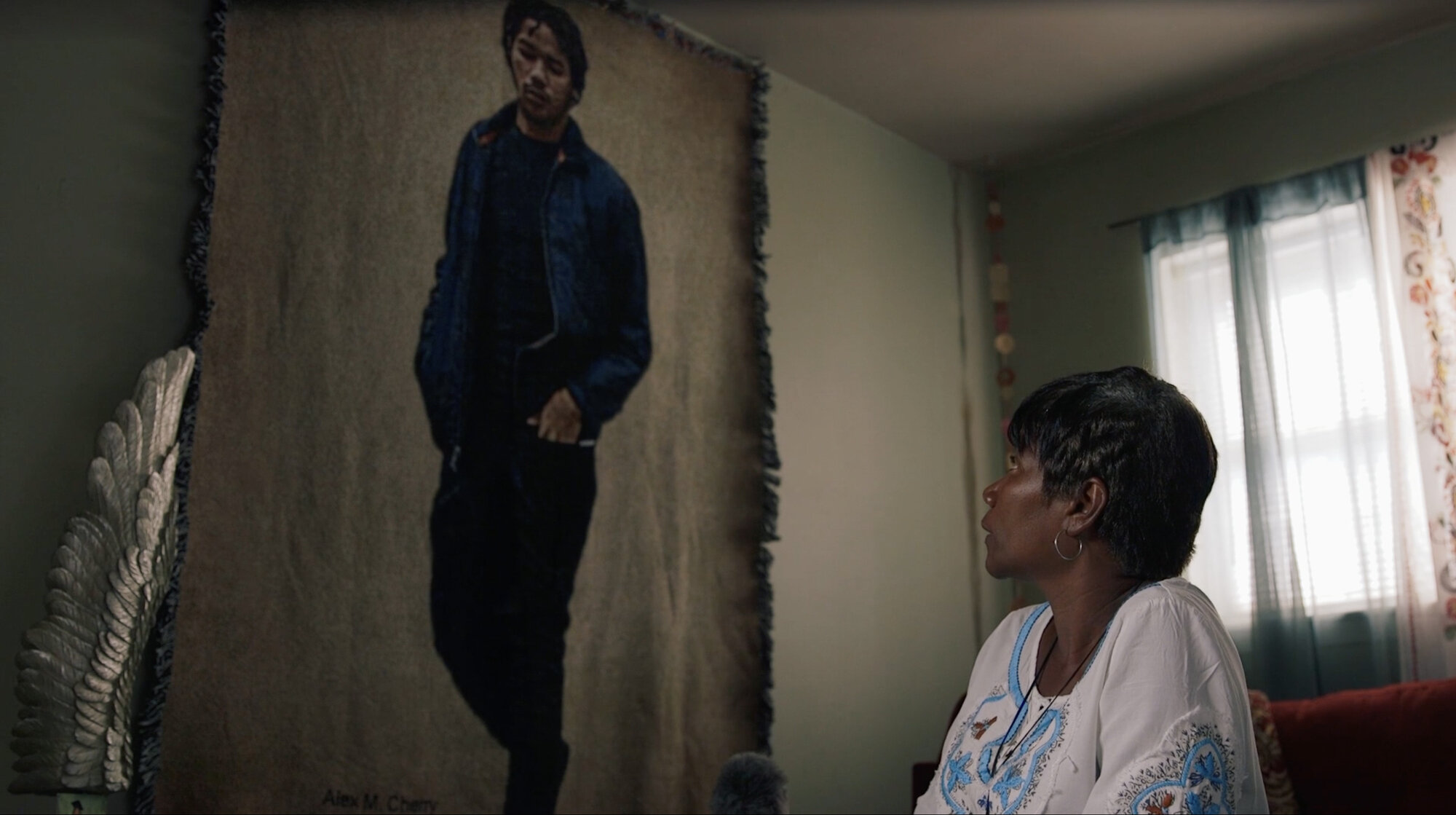 Christina Cherry gazes at a comfort blanket that depicts an image of her son, Alex Cherry, who was shot and killed in 2016 at age 21. Michael R. Wilson for Heaven Can You Hear Me/Brown Falcon Productions
Christina Cherry, as told to Lakeidra Chavis
Perspectives from those who work and live in the criminal justice system. Sign up to receive "Life Inside" emailed to you every week.

In Philadelphia, where hundreds of people are shot each year, and most are Black males, Mothers in Charge (MIC) supports women and families who have lost loved ones to violence. Members and staff of the organization appeared in “Heaven: Can You Hear Me?,” a short documentary about grief and recovery that aired on the World Channel and PBS in February.

Four mothers featured in the film told us their stories. In Part 2 of our series, we hear from Christina Cherry, a hospital technician and MIC member. Her son Alex Cherry was killed at a corner store in 2016. He was 21 years old.

I had four boys — all surprises. Alex, my youngest, always had a smile on his face and was lighthearted. He loved our family, including his cousins and nephews. A couple of days before he was murdered, he came over and said he wanted to make some T-shirts with the words “It’s Time To Communicate,” on the front. He wanted to be a mentor to some of the younger guys in the neighborhood.

Later that week, a friend and I went to JoAnn Fabrics. I was looking at a little sewing machine and called Alex, who was near a corner store where people were working the voting polls in our neighborhood. I told him I was going to get some supplies, so he could make his shirts. He told me, “I love you,” and I said, “I love you too, Alex.”

About an hour later, my friend and I drove to a restaurant to pick up lunch. My phone had died, and I was waiting in the car for it to charge. When it finally turned on, I had all of these missed messages. Then my older sister called me crying and said I needed to come home. I kept asking, “What’s wrong? Just tell me what’s wrong!”

I would’ve never imagined she would say that Alex was shot. I asked which hospital they were taking him to. She told me he was already dead.

I ran into the restaurant to tell my friend we needed to leave. I was so distraught, I just kept crying and yelling. I could barely hold myself up. One of the workers threw me up against the wall and told me I had to get out. I just kept saying my son had been killed, but they kept telling me to leave. When we finally made it to the spot where Alex was killed, they had removed his body, but some of the blood was still on the ground. I bent down to touch it and I just got chills.

Later that night, I was watching the news, and a story about my Alex’s murder came on. They reported that there was increased gang activity where he was shot. It was so hurtful.

My son had dealt with a lot of bullying in high school. At one point, a group of kids beat him up. He would beg me to let him stay home. Other times, he would pretend to leave for school and then skip. I think eventually he decided if he hung out with a certain group of kids, nobody would bother him anymore. But he got mixed up with the wrong crowd. I felt like people viewed his death as justifiable just because it might’ve been gang-related. The day of his death was just one long injustice after another.

The funeral home let me braid Alex’s hair for the memorial. I don’t think they usually allow that, but that was one of the ways that my son and I used to bond. As I was braiding his hair, I cut some of the pieces and put them in little glass vials, tied with a string of leather. Six years later, the hair in my vial still smells a little like him.

Grief for me has been a lot of hurt, anger and bitterness. I was angry because he was killed barely two weeks after turning 21. I didn’t celebrate any birthdays for a long time. It was hard for me to be happy for my nieces and nephews, and even my own kids, because these were experiences I couldn’t have with Alex.

After my son’s murder, I’d walk the path he might’ve taken to get to the store that day. I’d sit on the bench outside and put up reward posters, hoping somebody would say they knew what happened. I knew someone knew something, but they just wouldn’t give me any answers. The person who killed Alex was never identified.

Some of my favorite memories of Alex are of him playing video games with his cousins and playing dolls with his young niece. He was so loving. He would always say, “Mom, when you’re old, I’m going to take you to work with me every day. I’m never going to send you away for someone to watch you. You’ll live with me.” I would laugh and say, “Thanks, Alex.”

After his death, the funeral home gave me a large blanket with a photo of Alex on it. It’s a picture of him in motion. I hung it in my living room.

I like to look at it and think it’s Alex walking into his next life.