People Often Say My Son ‘Passed Away.’ Darien Was Murdered.

If I see a car that looks like Darien’s or the sunlight hits just right, all of the sadness comes flooding back. 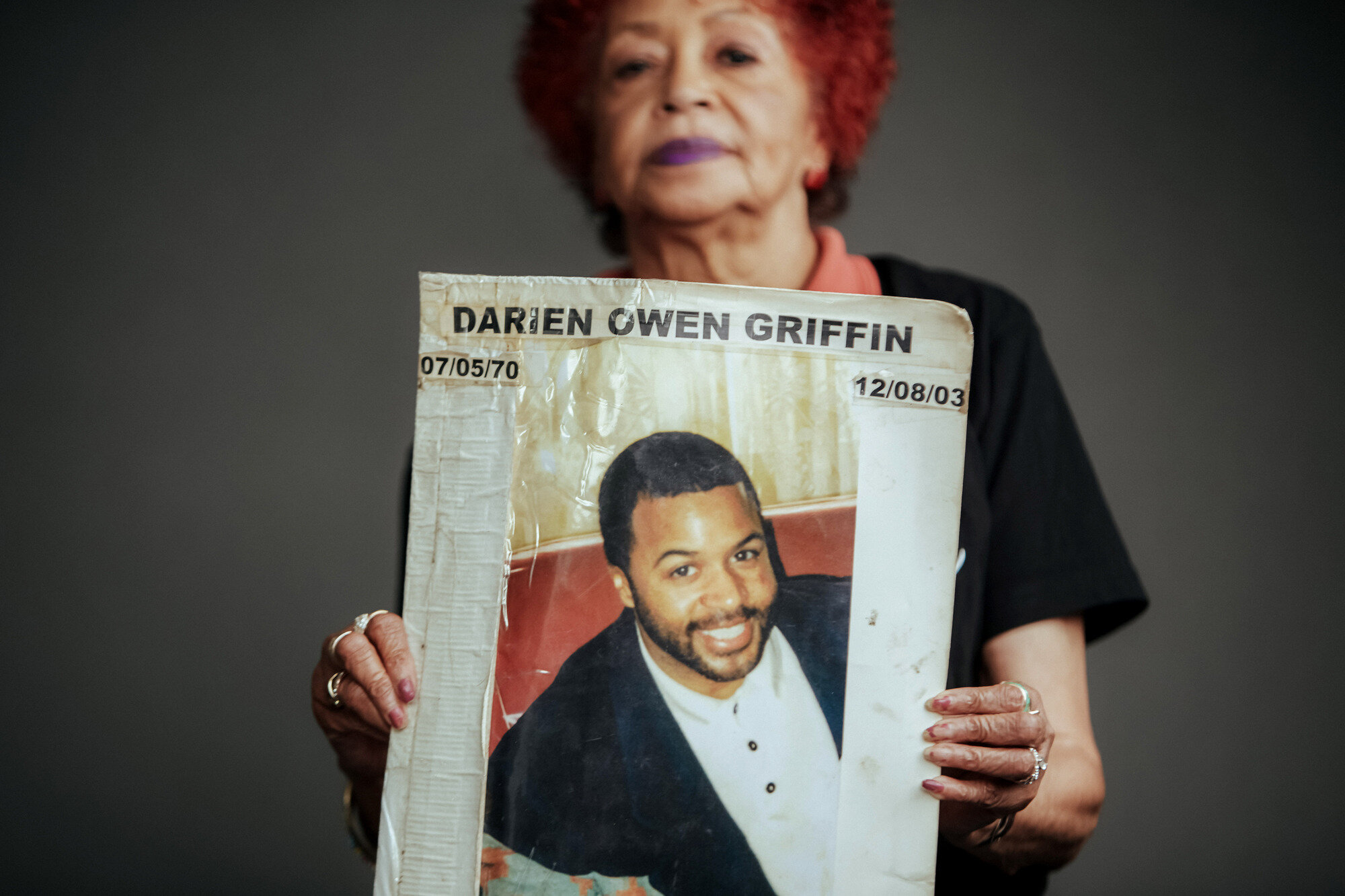 Dr. Patricia Griffin poses with a photo of her son, Darien Owen Griffin, who was killed shortly before Christmas in 2003. Deneka Peniston for Heaven Can You Hear Me/Brown Falcon Productions
By Patricia Griffin, as told by Lakeidra Chavis
Perspectives from those who work and live in the criminal justice system. Sign up to receive "Life Inside" emailed to you every week.

In Philadelphia, where hundreds of people are shot each year, and most are Black males, Mothers in Charge (MIC) supports women and families who have lost loved ones to violence. Members and staff of the nonprofit organization appeared in “Heaven: Can You Hear Me?,” a short documentary about grief and recovery.

Four mothers featured in the film told us their stories. In Part 3 of our series, we hear from Dr. Patricia Griffin, a retired therapist and educator and a member of MIC. Her 33-year-old son, Darien Owen Griffin, was shot and killed in 2003, shortly before Christmas.

I’m originally from California, but my family ended up in Philadelphia for my dad’s last duty station in the military. I had a lot of relatives, and we all lived on the same block. Everyone went to the movies on Saturdays and, in the winter, ice skating on Sundays. We used to take soda bottles to the store in exchange for nickels. We used to hopscotch, jump rope and play jacks in the street. We weren’t as isolated as kids are today.

I had three sons: Steven, Michael and Darien — the youngest. Darien was handsome and had a beautiful smile. He was a happy-go-lucky person. By age 33, he had two boys.

In 2003, on Thanksgiving, he was playing basketball and got into an argument with a group of men. About a week later, someone shot at him. A few days after that, on Dec. 8, he was shot and killed. We can only surmise it was somebody from that incident. It's the strongest possibility, but I don’t have any proof.

At the hospital, I remember being led into a room and seeing my son in a black body bag. They pulled down the zipper so I could see his face, and I saw his whole life in a flash. I could see myself pregnant, him being born, him taking his first steps and saying his first words.

I felt like a zombie after losing Darien. I would break down constantly. And because he died a few weeks before Christmas, it took me almost five years before I could celebrate it with my family again.

One day I drove past this young man who looked just like Darien. I parked nearby and approached him. I said, “Excuse me, young man. I hope I don’t offend you, but my son was murdered. You look so much like him. I just had to stop you.”

He asked if he could give me a hug.

You never know when moments like that are going to hit. If I see a car that looks like Darien’s or the sunlight hits just right, all of the sadness comes flooding back.

The majority of people say my son “passed away.” But when you say a person “passed,” it’s like saying they passed by and can return. My son can’t do that. He was murdered.

Everybody has their own way of dealing with grief, and sharing Darien’s story publicly is mine. I can let the whole truth out in a way that I can’t with family. I don’t want my grief to weigh on my family, but I can tell a stranger I cried 100 times that day or that I couldn’t get out of bed for two months. It’s a relief to be able to talk.

I think a few things can be done to address gun violence. Some of them are about our own communities. For instance, I think one of the dumbest street codes is “no snitching.” We have a lot of people who want to give information, but they’re too scared.

I also think it would be helpful if we have more police, and if police departments get back in touch with communities and build trust, so people will be more willing to provide them information when shootings happen.

Another aspect of this is the guns. They’re so controversial, and it puts me in a dilemma. I believe in the rights of the Second Amendment. I served in the Army Reserve and loved going to the range and shooting an M-16 rifle. I’d like to believe I would’ve been a cowgirl in another life. So I have no problem with people exercising their Second Amendment rights.

But I think a lot of people with ill intentions have access to guns. It’s not like these people are out here going hunting. They’re not going to gun stores to buy weapons; they’re getting them illegally.

At the same time, I know a lot of young people in my community are carrying guns because they’re afraid. I understand how complicated this is. There are things I understand about this issue, but don’t condone.

But the truth is, I don’t think mothers will ever stop crying as long guns are so accessible.