My Son Nacear Was Killed on Memorial Day. It Took Me Two Years to Cry.

I was taking care of his kids, going to work, and helping my other children process their brother’s murder. I couldn’t have accomplished what I needed to if I had cried sooner. 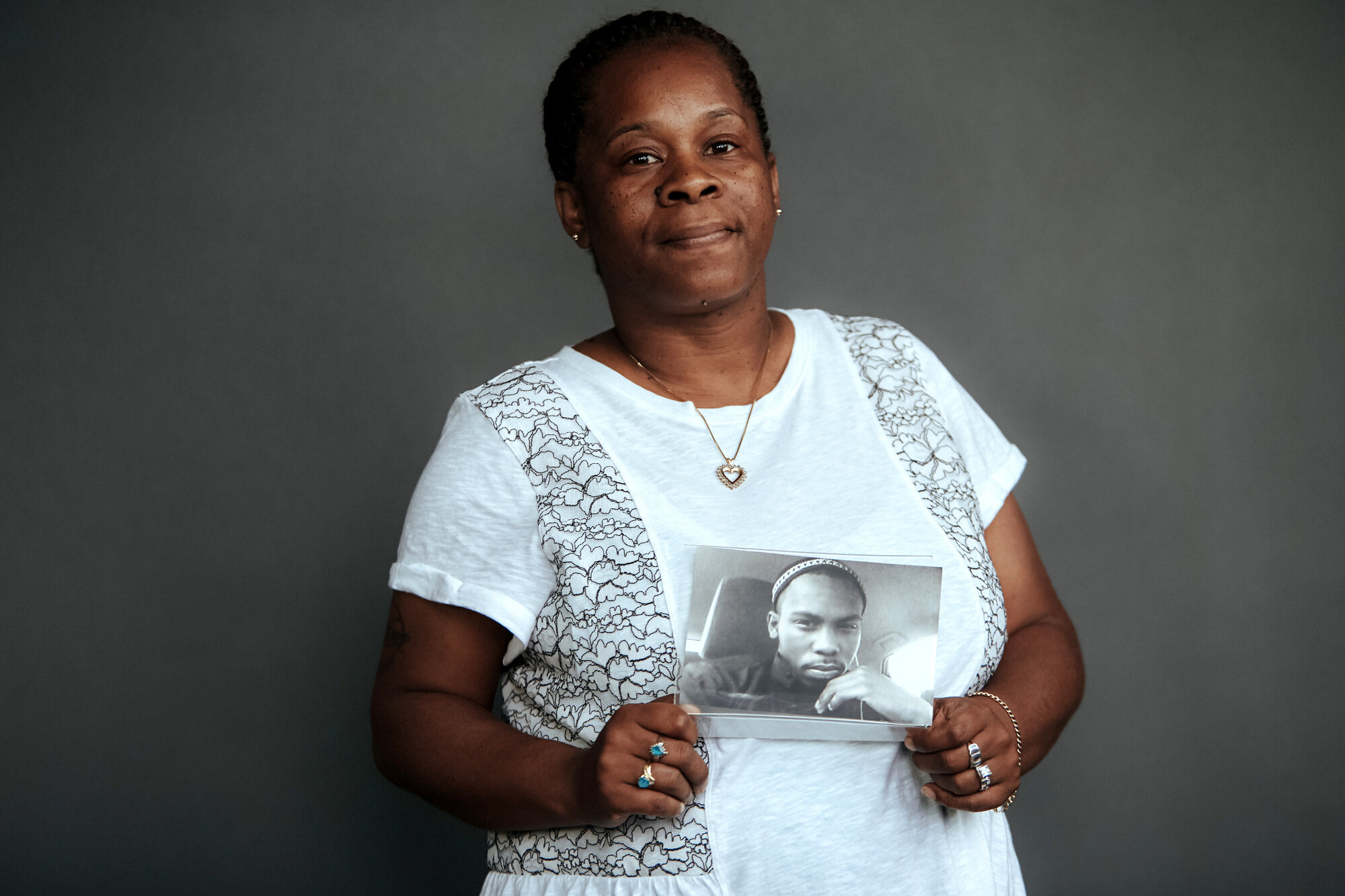 Johndell Gredic displays a portrait of her son Nacear Gredic, who was shot and killed at age 20. Deneka Peniston for Heaven Can You Hear Me/Brown Falcon Productions
Johndell Gredic, as told to Lakeidra Chavis
Perspectives from those who work and live in the criminal justice system. Sign up to receive "Life Inside" emailed to you every week.

In Philadelphia, where hundreds of people are shot each year, and most are Black males, Mothers in Charge (MIC) supports women and families who have lost loved ones to violence. Members and staff of the nonprofit organization appeared in “Heaven: Can You Hear Me?,” a short documentary about grief and recovery.

Four mothers featured in the film told us their stories. In the last part of our series, we hear from Johndell Gredic, a nurse and member of another Philadelphia support group, Moms Bonded by Grief. Her son Nacear Gredic was killed on Memorial Day in 2015, at age 20.

When he was little, we called Nacear “pop-pop” and his nickname was Tater. He was real fun to be around, and a little mischievous. He would throw rocks at people and run. We’d say he had two left feet though, ‘cause he’d always get caught.

As Nacear went through adolescence, I put him in lots of activities. He loved to dance and play basketball and lacrosse. By the time he was 20, he had two young kids and another one on the way.

The night he was killed — May 25, 2015 — I was watching my grandson, who was 3 years old at the time. Around 10 that night, my phone started ringing. I thought people were calling me to talk about some drama, so I ignored it. But after a while, I picked up and found out that Nacear had been shot after trying to break up an argument in a park.

All I wanted to do was see his face. I knew he had already passed away while I was driving to the hospital, but I needed to see him to have that peace for myself.

When they allowed me in Nacear’s hospital room, I expected a bloody mess that showed they tried to save him, like what you see on TV. But my son looked like he was laying there asleep, like he was going to jump up and be like, “Ah ha, Mom!” He had a little scratch on his nose from when he fell after he was shot, but that was it.

I kept telling Nacear that he was OK, that those bullets didn’t kill him. And I told the doctors he must’ve died from an asthma attack or something else. They just looked at me like I was crazy, but I just couldn’t believe my son had died like this. I refused to sign his death certificate.

When I went back into the waiting room, which was full of friends and family who had arrived, my mom asked me how we would pay for the funeral. I had no idea. I couldn’t even afford my cable bill. I pretended like I was going to grab something from my car. Instead, I just drove home. It took me two years to finally cry.

In December 2017, shortly after the man who murdered Nacear was found guilty, I started crying while I was watching something on TV. I don’t even remember what it was that made me react that way.

When the tears would not stop, I called a friend from Mothers in Charge and asked her what was wrong with me. She said I was crying because I had finally accepted that Nacear was gone.

I don’t regret that those tears didn’t come sooner. I couldn’t have accomplished what I needed to if I had mourned that way. I had consumed myself with every aspect of his janazah, an Islamic funeral. I took care of his kids, including a son* who was born after he died. I was still going to work and helping my own children process their brother’s murder. If I had cried sooner, I would’ve lost my mind.

When I meet new people, I always tell them I have five children. Even though one was stillborn and Nacear is dead, I don’t talk about them in the past tense. But the truth is, I don’t really meet new people like that anymore. Since my son was killed, the only new people I meet are mothers of murdered children.

In 2019, I was nominated to attend Circle of Mothers, a weekend retreat in Florida focused on self-healing for mothers who’ve lost children. It’s hosted by Sybrina Fulton, whose son Trayvon was killed in 2012. They paid for me to attend. There were a lot of activities, and I met mothers from all around the world who had lost children. We spent the weekend together, laughing and talking. Last year, I went to Memphis to speak at a seminar that one of the moms I met at the retreat organized. I’ve also joined another organization in Philly called Moms Bonded by Grief.

People don’t seem to have a lot of ways to fix gun violence. I think one thing we can do is get rid of the bullets. We know a lot of people have guns, but if we’re able to take away at least one bullet, we can save a life.

Before the pandemic, a group of moms and I would go around asking people to turn in their bullets. We also collected them and used them to make memorial bracelets. We wanted to turn them into something positive. The guns aren’t going to work without bullets.