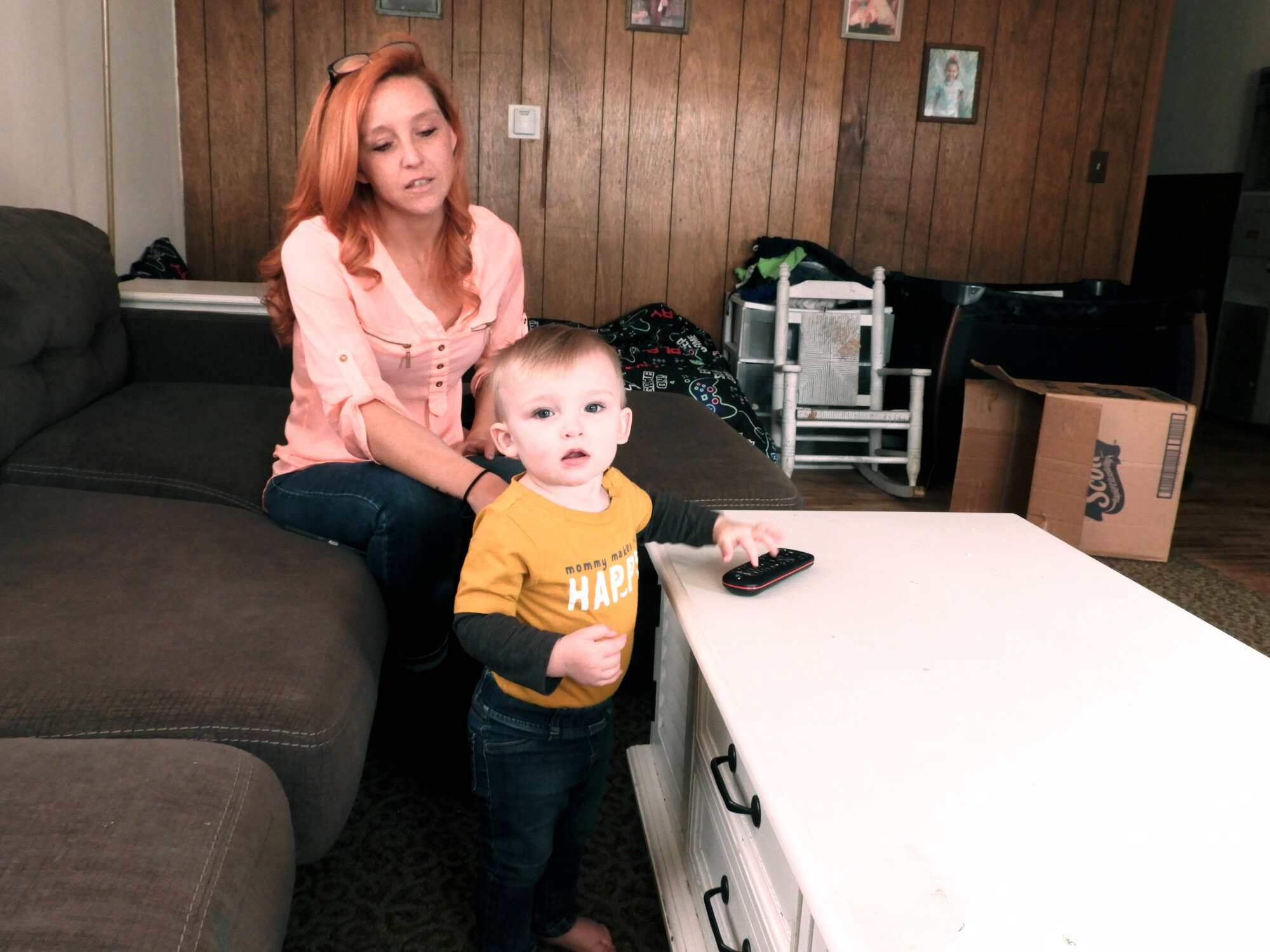 NEWKIRK, Okla. — Early in her pregnancy, Amanda Aguilar struggled with severe nausea that sometimes made it hard to eat.

A doctor had previously approved a medical marijuana license for her, so she used pot to ease her morning sickness.

This story was produced with the Oklahoma nonprofit newsroom The Frontier.

Aguilar, 33, said she stopped using marijuana after her third month of pregnancy and tested negative for the drug after her healthy son was born in October 2020. But the hospital found traces of marijuana in her baby’s stool.

Two months later, the district attorney in Aguilar’s mostly rural county near the Kansas border charged her with child neglect, a felony. She has decided to fight the charge, and recently declined to comment on the advice of her public defender.

She is one of at least 26 women charged with felony child neglect in Oklahoma since 2019 for using marijuana during their pregnancies, an investigation by The Frontier found. The crime can carry a term of up to life in prison in Oklahoma, though previous defendants pleaded guilty and received probation.

At least eight of the women had state medical marijuana licenses, which allow holders to legally purchase and use cannabis after a recommendation from a physician.

The nonprofit National Advocates for Pregnant Women, which tracks pregnancy-related prosecutions, says these Oklahoma cases are the only ones of this kind the group has heard about. In Alabama, pregnant women have been prosecuted after filling prescriptions for medications from their doctors.

Officials in Arizona placed one mother on a career-limiting child abuse registry after the birth of her son in 2019, claiming she had neglected her unborn child by using marijuana with a medical license. That case was overturned earlier this year, with the appeals court finding that medical marijuana was similar to any medicine used under physician's care.

In Oklahoma, the issue of whether medical marijuana can be considered an “illegal drug” is likely to be key in future prosecutions. People in Oklahoma can be charged with child neglect for using illegal drugs while pregnant, under rulings in 2020 and 2021 by the state Court of Criminal Appeals. These rulings all involved women who used methamphetamine during their pregnancies. Women here have been prosecuted even after giving birth to healthy babies.

But marijuana is generally legal for people in the state if they have a license from the Oklahoma Medical Marijuana Authority.

The agency says it has no rules prohibiting pregnant people from using the drug or holding a license, and there are no penalties for doing so. Oklahoma doesn’t require doctors to ask if someone is pregnant or may become pregnant before signing off on a medical marijuana license. 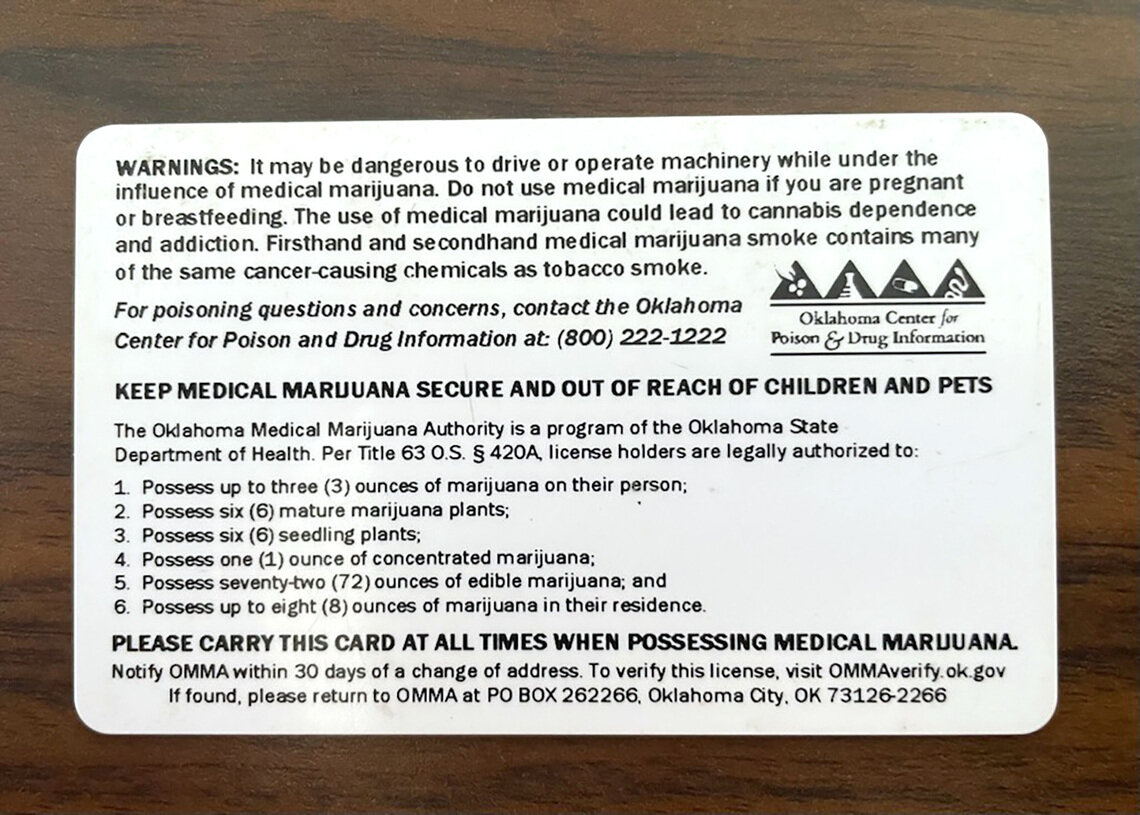 Oklahoma medical marijuana licenses are issued on the recommendation of a doctor. The licenses include a warning against using the drug during pregnancy, but the Oklahoma Medical Marijuana Authority said it has no rules prohibiting pregnant people from getting a license or using the drug.

Medical licenses and cannabis products in the state do carry advisory warnings against use during pregnancy, similar to those found on cigarette packaging. Medical experts advise against using marijuana, cigarettes, alcohol and other drugs while pregnant.

Brian Hermanson, one of two prosecutors in the state who has brought charges against pregnant women, has not responded to multiple recent requests for comment. In past interviews, he has said the warnings on Oklahoma’s medical marijuana license justify his cases against mothers.

The prosecutions involving medical marijuana are “inconsistent with state law,” said Ryan Kiesel, a civil rights attorney and former Oklahoma lawmaker who worked on litigation on behalf of the 2018 campaign to legalize medical marijuana in the state.

Dana Sussman, acting executive director of National Advocates for Pregnant Women, said Hermanson is exceeding his authority by applying his own ideas about parenting to medical marijuana patients.

“His role as a prosecutor is not to impose his moral authority on the people in his jurisdiction,” Sussman said.

Three-quarters of U.S. states permit marijuana use for medical purposes, and 19 have authorized recreational use. Oklahoma may vote on legalizing recreational marijuana use in a coming election, now that legalization proponents have submitted more than the required number of signatures to get the measure on the ballot. Similar measures have already qualified for referendums this year in Maryland, Missouri, North Dakota and South Dakota.

Between 2002 and 2017, the proportion of U.S. women who reported using marijuana during the first trimester of pregnancy grew from under 6% to 12%, according to data from the National Survey on Drug Use and Health, which collected information from close to half a million women.

While drugs like methamphetamine and cocaine pass through the body rapidly, it’s possible for evidence of marijuana to show up in a newborn screening months after a mother’s last use, according to medical journals and court testimony.

But Dr. Mishka Terplan, who has researched substance use in pregnancy and has helped develop American College of Obstetricians and Gynecologist guidance on addiction, said decades' worth of data on prenatal exposure to cannabis suggests any long-term health effects on babies are minimal. The impact of cannabis exposure in the womb can also be hard to separate from that of tobacco use and other health and environmental factors, he said.

The threat of criminal prosecution in Oklahoma has made it harder to gain pregnant patients’ trust and to provide treatment, said Dr. Stephanie Pierce, who runs a clinic for pregnant women with substance-use disorders at the University of Oklahoma Health Sciences Center. Instead of acting as a deterrent for drug use, she added, fear of arrest can keep women from seeking prenatal care.

“We know that if you don't get regular prenatal care during pregnancy, or if you come to prenatal care really late, that's a huge risk factor for adverse outcomes in the pregnancy,” Pierce said. “So it really just kind of compounds all of their risks.”

Pierce and more than 30 other Oklahoma doctors signed a public letter last year, condemning the criminal prosecution of women for drug use during pregnancy.

All of the criminal cases for marijuana use that The Frontier found were filed in just two of Oklahoma’s 77 counties, by prosecutors who have aggressively charged mothers for substance use during pregnancy — Hermanson in Kay County, on the Kansas border, and Kyle Cabelka in Comanche County, in the southwest corner of the state.

The Frontier found four women in Comanche County charged in 2021 with child neglect for allegedly using marijuana during their pregnancies. At least one had a medical marijuana license. Cabelka has criminally charged at least 23 women in connection with drug use during pregnancy since 2018. Most of the cases involved meth. He declined interview requests.

In Kay County, The Frontier found 14 women who were convicted of child neglect in the past two years after using marijuana during their pregnancies. None of the cases went to trial — all of the women pleaded no contest to the charge and were sentenced to probation for terms ranging from two to 10 years.

Hermanson’s office has filed at least 50 child neglect cases since 2019 against women for using drugs during pregnancy, 22 of them involving marijuana. Seven, including Aguilar, had medical marijuana licenses. Some of the women convicted in Kay County were also ordered to attend parenting classes, submit to drug tests, complete community service, or undergo assessments for drug and alcohol addiction.

Most of the women Hermanson prosecuted for marijuana didn’t have a prior criminal history, he said during a brief interview outside his office in March. But he hoped a suspended sentence could help the women and “stop the cycle” of drug use, he said, noting that he’s charged some women more than once for using illegal drugs during successive pregnancies.

“They’re just not taking into consideration the child,” he said.

The women receive deferred sentences and the cases can be erased with no felony conviction on their records if they successfully complete the probation requirements, he said.

But even with a deferred judgment, which doesn’t count as a felony conviction, the arrest can still show up on a background check for a job, four criminal defense lawyers told The Frontier. Hiring an attorney to try to get the charge completely removed can cost as much as $5,000, they said.

Aguilar still has custody of her five children; a child-welfare worker decided that all of the kids were well-cared for and did not remove them from her home, according to testimony at a hearing in August. Her case is scheduled to go to trial in February 2023.