‘A Moral Disgrace’: How The U.S. Stopped Counting Deaths Behind Bars

The Department of Justice is failing miserably at collecting data on deaths. Experts say that makes it hard to identify the worst prisons and jails. 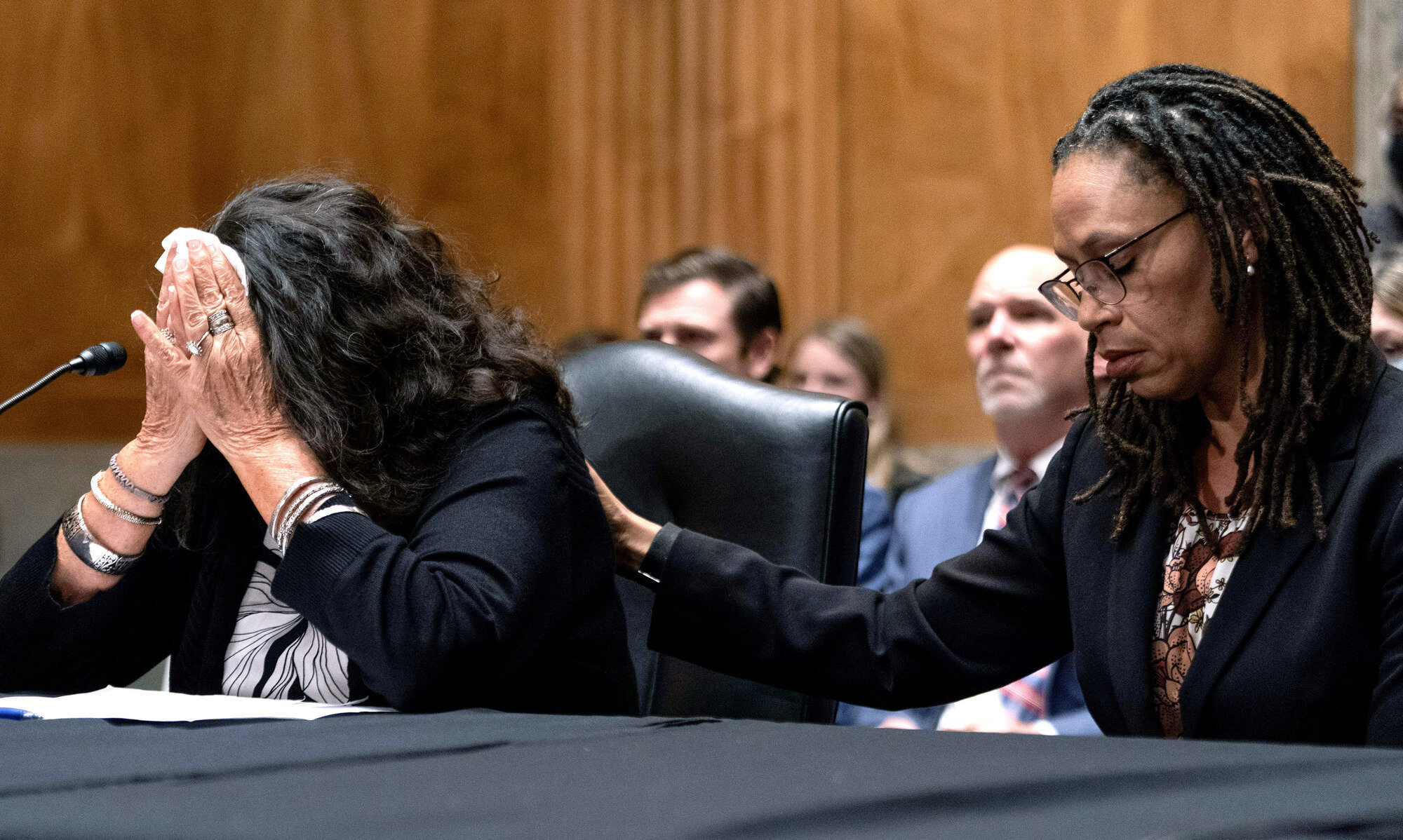 Belinda Maley, left, cries as she listens to a recorded call with her son Matthew Loflin, who died in a Georgia jail. Andrea Armstrong, a law professor at Loyola University New Orleans, consoles Maley during a hearing about deaths in custody in Washington, D.C., on Sept. 20, 2022. Jacquelyn Martin/Associated Press
By Jamiles Lartey

Are you curious about the mating strategies of the foothill yellow-legged frog? Good news: The federal government has publications on that.

But if you want to know how many people have died in U.S. jails, prisons and detention centers in recent years, federal data will be harder to come by. A bipartisan Senate report released this week found that the U.S. Department of Justice is failing miserably at collecting this data, with at least 990 uncounted deaths in fiscal year 2021.

Many die helpless and afraid. During a subcommittee hearing on the findings, senators heard a recording from a 2014 phone call between Matthew Loflin, who was incarcerated in a Savannah, Georgia jail, and his mother, Belinda Maley. With desperation in his voice, he said that he had been coughing up blood and his feet were swollen. “I need to go to the hospital… I’m going to die in here,” he told her.

Loflin had cardiomyopathy, a heart disease, which wasn’t properly treated in jail according to documents reviewed by the Senate subcommittee. His mother alleged that the jail’s for-profit medical provider, Corizon Health, and its focus on the financial bottom line, contributed to her son’s death. Corizon has said it puts patient care first and told jail staff to hospitalize people when needed. A 2020 Reuters analysis of deaths in the country’s largest jails found death rates were 18% to 58% higher in facilities that had privatized their health care versus those where care was provided by public agencies.

Georgia senator and subcommittee chairman Jon Ossoff said that stories like Loflin’s were evidence of “a moral disgrace” unfolding behind bars across the country. The hearing (which you can watch in full) was the latest in a series of meetings Ossoff has chaired on prisons and jails. A report in July exposed widespread misconduct and abuse in the federal prison system, specifically centered around the U.S. Penitentiary in Atlanta.

Suffering and death behind bars in America is nothing new, but some of the data problems are. As recently as 2020 the Justice Department was collecting data from an average of 98% of all local jails and every state prison.

That effort dated back to 2000, when Congress passed the Death in Custody Reporting Act, which was reauthorized in 2014. But a recent bureaucratic reshuffling transferred responsibility for collecting the data from one department section to another with a new methodology. The new approach is capturing only about one-third of local jail deaths and two-thirds of state prison deaths compared to the old methodology, according to the subcommittee’s report. A related report from the U.S. Government Accountability Office found that about 70% of the records received were missing at least one required element.

While the older data may have been nearly complete in terms of how many prisons and jails it covered, it was also limited in many ways. For example, it counted deaths but never included totals by facility. This made it impossible to use federal reports to identify especially dangerous or abusive prisons, jails or detention centers.

Andrea Armstrong, a professor at Loyola University College of Law in New Orleans, testified that this was one of the most valuable uses for this kind of information. “Where you have higher rates of death and where you see particular patterns in the types of deaths, that may signal larger problems at the facility as a whole,” she said. Armstrong heads up the Incarceration Transparency database, where law students work to record every jail and prison death in Louisiana. The differences between facilities can be stark.

The Senate report comes a week after a federal judge issued a restraining order over conditions in the Los Angeles County Jail, where recently arrested people have allegedly been denied clean water, functioning toilets, showers, adequate food and psychiatric medication. The order temporarily bars authorities from holding anyone in the jail’s reception center for more than 24 hours. According to a lawsuit by the American Civil Liberties Union, many of those held at the jail — including some who were chained to chairs for days — are mentally ill, fitting a pattern of neglect and abuse that’s been observed statewide in California.

In another suit filed against Los Angeles County and its sheriff last week, a mother alleges her son was beaten to death in the facility, citing injuries including bruises, contusions, loss of teeth and a broken arm. Jail authorities had claimed his death was caused by a drug overdose. County officials did not comment on either lawsuit.