When It Comes to Voting in Jail, the Devil Is in the Details

Most people in New York City jails are eligible to vote. But that doesn’t mean it’s easy for them to register or cast their absentee ballots. That’s where volunteers come in. 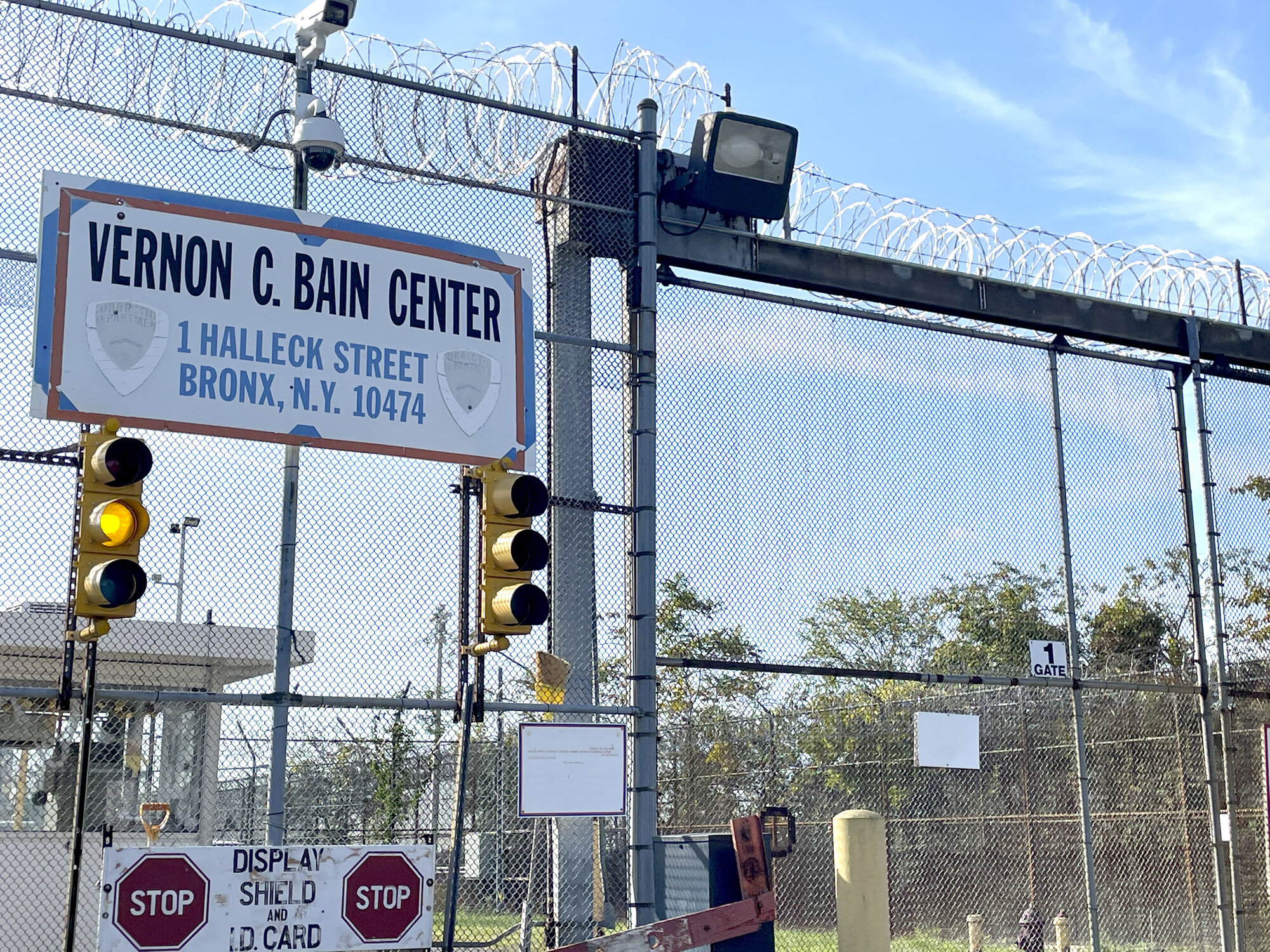 Just a few weeks before my reporting trip to Vernon C. Bain Center, a jail barge just north of Rikers Island known as “The Boat,” someone jumped from atop the facility into the East River below. The man, Gregory Acevedo, was the 15th person this year to die in the custody of the New York City Department of Correction. By mid-October, when I boarded The Boat alongside a group of volunteers trying to register detained people to vote, the department’s death toll had climbed to 16. By publication time, the count was at 18.

Given the well-documented carnage across the river at Rikers Island, I felt a sense of heaviness and anticipation on my way to The Boat. The two corrections department officials I was riding with were upbeat, but I was daunted by this hulking, five-story, floating jail with 16 dorms and a capacity of over 800 detainees. The Boat opened in 1992 as a temporary solution for land-based overcrowding. Three decades later, it still houses maximum and minimum security detainees.

After our group boarded The Boat, officers inspected our IDs and signed us in. We had to remove our shoes before shuffling through metal detectors. The guards took most of our phones, and they examined the volunteers’ packets of information and forms.

I was, to my surprise, allowed to bring my phone into the jail. But it came with a set of rules. For example, I could report what I heard detained people and volunteers say, but I couldn’t quote them by name without written consent. I could take photos of what I saw, but couldn’t publish any images of locks, doors, cameras or keys. Also off limits were pictures that showed identifying features of detainees and volunteers. This included their tattoos, piercings — and their faces. Still, even with these rules, I couldn’t help but feel that I was getting away with something.

The plan for the day was to canvass a total of six housing units on the first, second and third floors. Each unit we visited had two dorms with 25 single beds apiece and a “reading room” with a TV, tables and chairs. “I ain’t seen civilians in a long time,” one man mused while my group waited at the gate of one of the units.

The men I spoke with throughout my visit had been locked up on The Boat anywhere from a few weeks to six months. One man told me he’d been in and out of Rikers Island for most of his life. 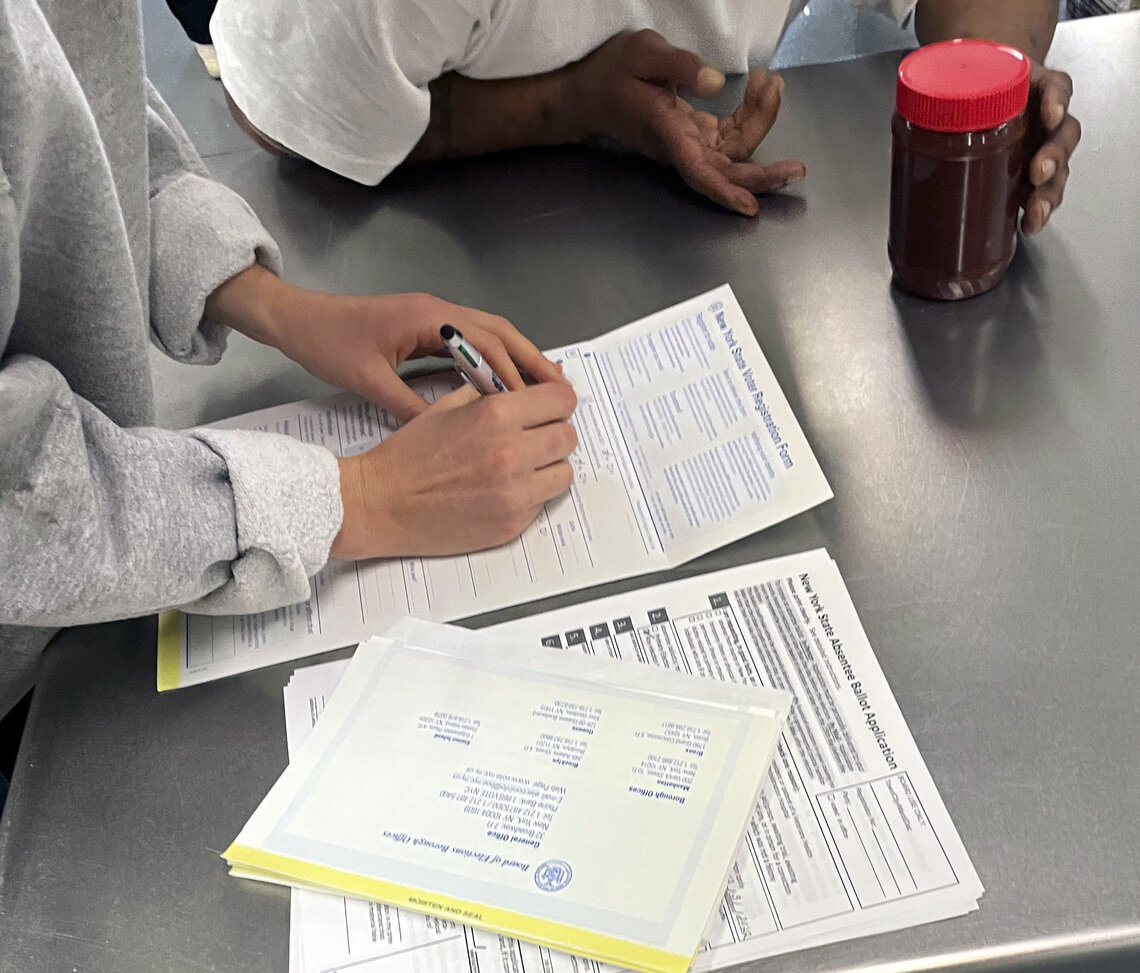 Of course, doing voter registration and education in a jail isn’t like a traditional get-out-the-vote drive, where volunteers can go door-to-door or catch potential voters in a supermarket parking lot. Because most people in New York City jails are there pre-trial, or they haven’t yet been convicted of a felony, they are still eligible to vote. People serving jail time for misdemeanors can also vote.

But having rights doesn’t mean that everyone knows about them. And the detained people who know they can register and cast their ballot often lack the means to participate.

Corrections officials say they hang educational flyers and signs throughout their facilities and put voter materials in law libraries and other centralized locations. But key to their strategy are partnerships with civic groups and volunteers like the ones I shadowed.

This group of volunteers — mostly from a citywide coalition of activists trying to secure election access for incarcerated people — manage to visit about one facility a month. They usually go to jails in the Rikers complex, and some are pushing for the Board of Elections to establish a polling site on the Island.

Because jails hold a transient population, helping detained people fill out their forms can be more complicated. Questions come up: If a person has been locked up for months, what voting district do they belong to? And what address should they use to register?

Another challenge to voter engagement in jails is that people in custody have very limited access to information. They can’t use the Internet, and even if the single TV in some reading room plays the news, dozens of men would need to crowd around to watch. To help fill in the information gaps, the volunteers brought in packets that included application deadlines, eligibility criteria, and all of the registration and ballot request forms detained people needed. In one-on-one conversations with detained people, they also answered a range of questions — about the voting process, who was on the ballot, and the different political parties running candidates. 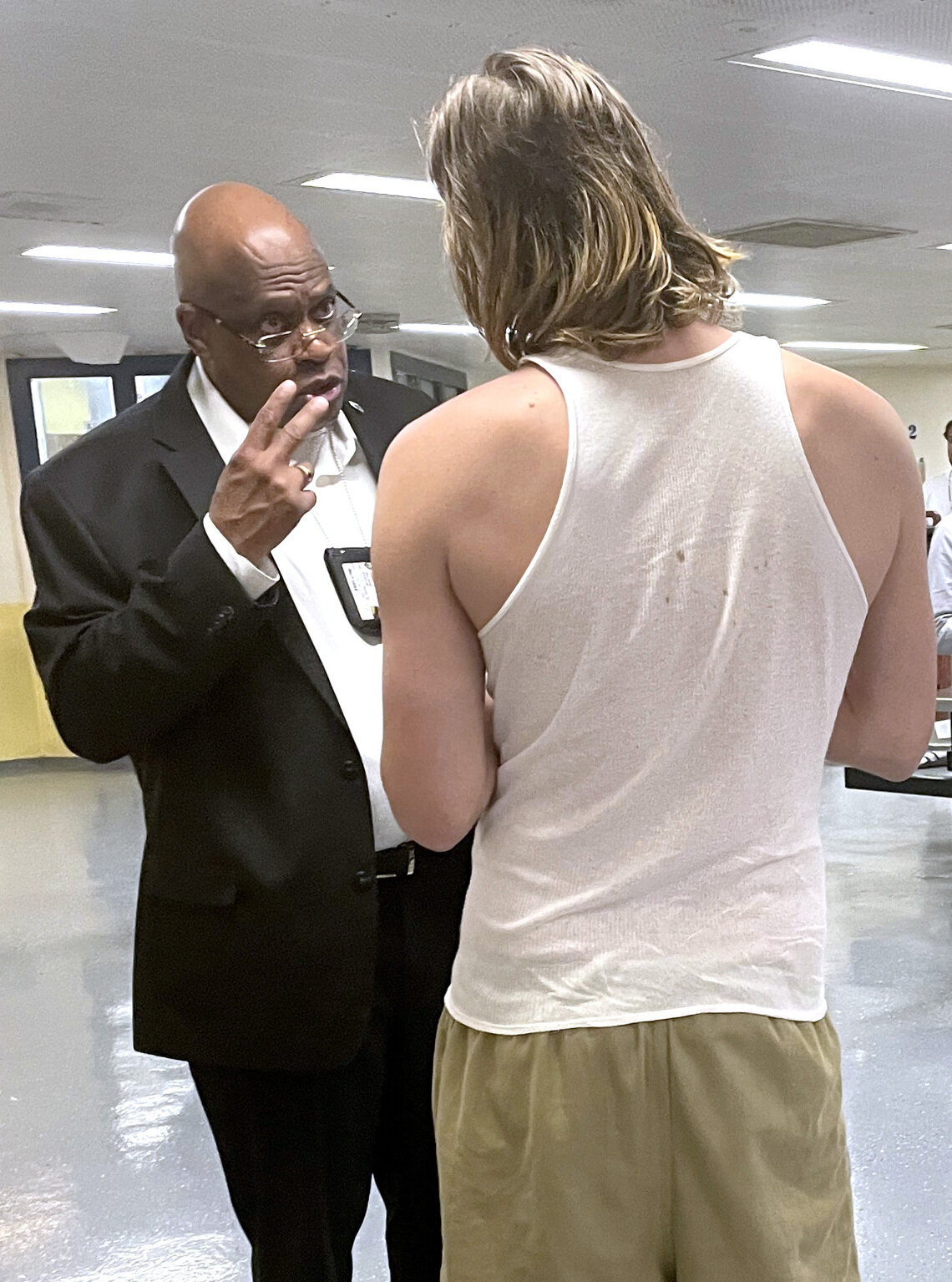 Selwyn Fergus, New York City Department of Corrections executive director of programs and operations, delivers voter registration forms to the Board of Elections.

A more surprising obstacle to registering people in New York City jails is that someone has to make sure their signed forms are properly transported to the state Board of Elections. In practice, that responsibility falls to one person — Selwyn Fergus, the Department* of Correction’s executive director of programs and operations.

Fergus is in charge of civic engagement programs for the entire system, and that includes voting. For the most recent New York elections — the primaries in June — Fergus hand-delivered 133 signed absentee ballots to the Board of Elections. Corrections officials told me that about 300 people in jails had registered to vote since January.

Some of the men I talked to were frustrated by the obstacles to voting. One who had been incarcerated for five months said he had registered in time for the primaries, but never received an absentee ballot. “Last time, people signed up to vote and nobody got the absentee ballots,” he said of himself and others in his unit. “Nobody even got the chance to vote.”

Fergus told that man that he wasn’t sure why he didn’t receive a ballot, but that some people didn’t get them because there wasn’t a primary election in their home district. In other cases, he said, people were disqualified from voting because they selected two political parties on their forms when they could only pick one.

Still, the man who hoped to vote in June remained frustrated because, sitting in jail, he couldn’t follow up with officials himself to figure out what happened. “Everybody matters,” he told me. “We actually do count. A lot of stuff is going on against abortion, and I’m not for that.”

I got a sense from many of the volunteers that their voting work is part of a bigger project to remind detainees that they still matter in their communities. Fergus, who brings in the volunteers, seemed to hold a similar view. Along with paperwork help, he gave pep talks. “We care enough to come into your house,” Fergus told a table full of detained men. “If you didn't matter, why would we come to your house?”

Despite the fact that these men were housed on The Boat, it was clear that they were far from home. Throughout the units we visited, we saw uniforms and undershirts hanging from clothes lines or spread out on chairs. Two detained men told me they had to handwash their uniforms in the shower and air dry them because the laundry system on The Boat was lacking.

As we worked our way through the housing units, I wondered if the men understood that they could vote for the people who would ultimately decide their fate: judges, district attorneys and legislators. 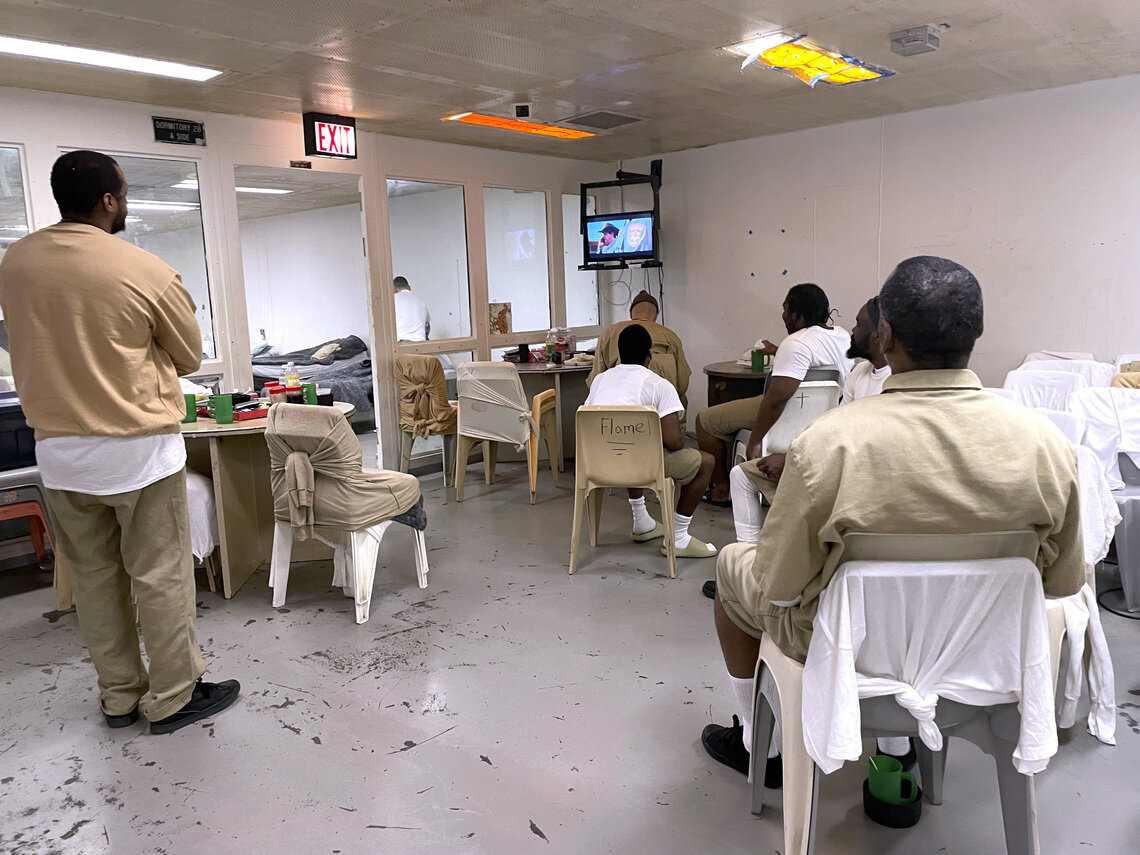 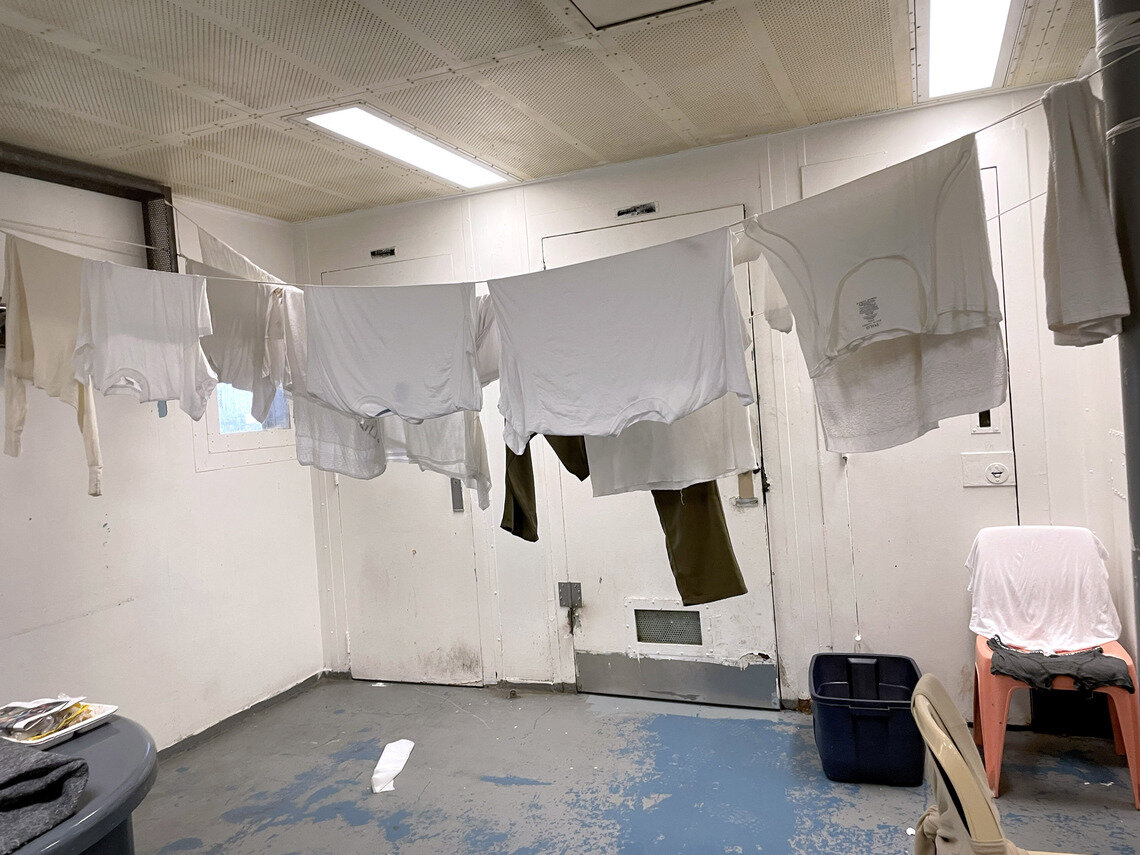 Uniforms hang from clotheslines and are spread out on chairs to air dry after being hand washed in the shower. Some of the detained men have said they handwash their uniforms because the laundry system is lacking.

Shayla Mulzac, the corrections department spokesperson who coordinated my visit, politely hovered over my shoulder during most of my time in the housing areas. At times, when I struck up conversations with detained men as volunteers registered them, she would remind me of the rules I agreed to in exchange for keeping my phone.

At one point, a detainee asked Mulzac if she was a journalist like me. “No, I'm from DOC,” she told him. “I work in the press office, so I bring in journalists to hopefully cover positive stories about initiatives that we do. Because the media always has bad things to say, so if there is an opportunity to highlight something positive, we push for that.”

Toward the end of my visit, I sat down next to a man to ask him about voting and living in jail. He told me he wasn’t eligible to vote, then pivoted to the fact that he and the other men in his unit couldn’t adequately wash their clothes.

“This is the environment we live in,” another detained man muttered under his breath. “You can’t make this up.”

A representative from the NYC Department of Correction Press Office, Shayla Mulzac, did not respond to fact-checking questions by the communicated publication time.

*An earlier version of this story misidentified Selwyn Fergus' title. He is the Department of Correction's executive director of programs and operations.