From Crip to Crochet Artist: How an Unlikely Hobby Changed My Life in Prison

I used to hide this cathartic craft because Crips don’t crochet. But making items that fellow prisoners can give to their loved ones has allowed me to create a peaceful new identity. 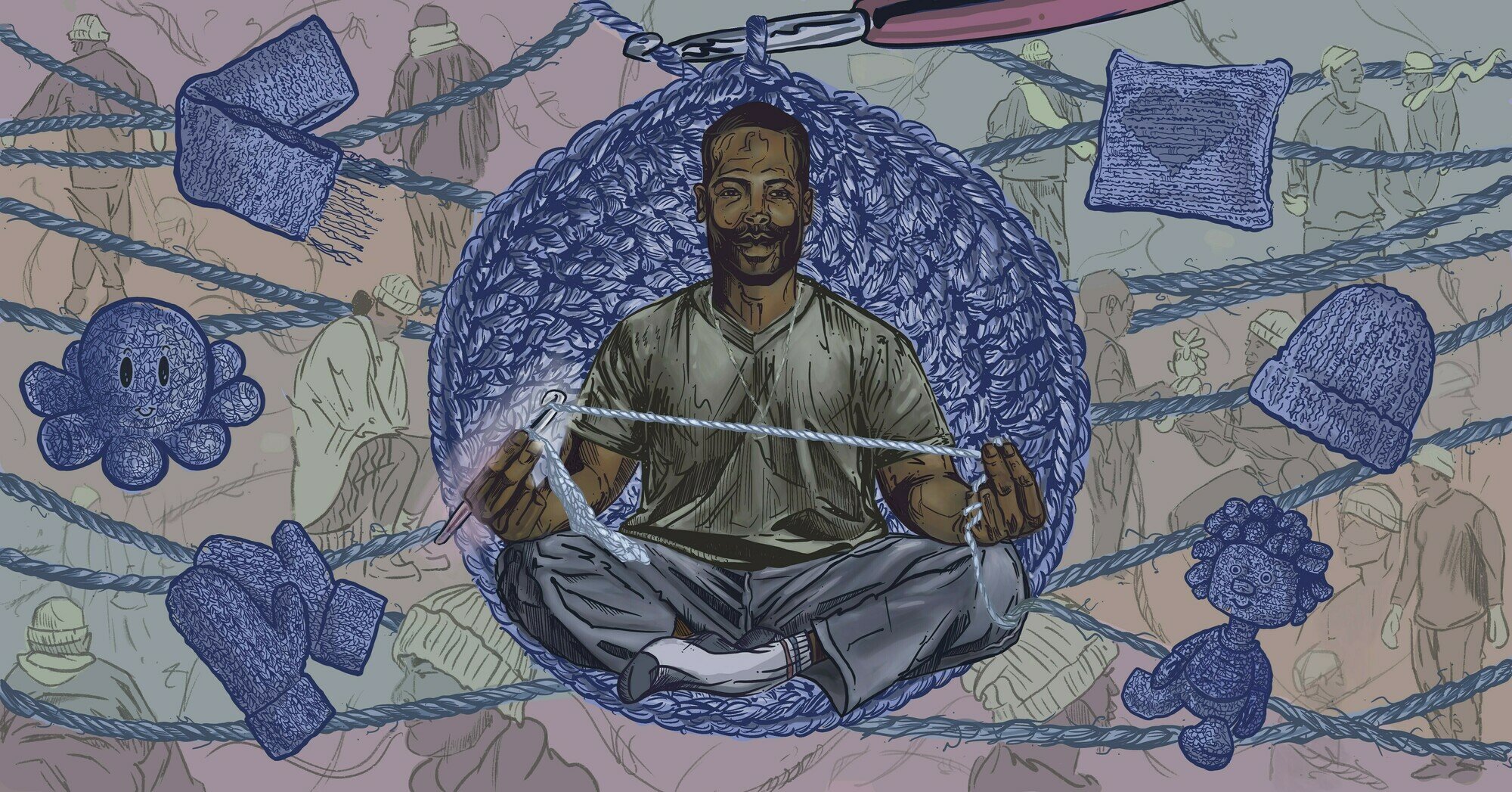 Nadd Harvin for The Marshall Project
By LaMarr W. Knox
Perspectives from those who work and live in the criminal justice system. Sign up to receive "Life Inside" emailed to you every week.

Two years later, I was involved in a shootout at a bar. Two men died, and three others were wounded, including me. I was sentenced to 62 and a half years to life. Today, I take full responsibility for my actions. But I’ll be 82 when I see a parole board.

Bloods and Crips were new to New York prisons when I started serving my sentence in the mid-90s. There were (and still are) many more Bloods, and I was often the only Crip in a facility. My only concern was survival, and I avoided everyday activities to stay safe.

I once saw a guy go for a layup in a friendly game of basketball, and when he landed, someone came up behind him and sliced his face with a razor. So I didn’t play sports. On a few occasions, I saw men get stabbed while taking a shower in the yard. So I didn’t shower outside. I refused to get caught slipping.

I knew that violence would determine how much respect I was going to get in prison, but I never talked to anyone about my crime. It’s hard to live with taking a life, but I didn’t have an outlet to be vulnerable. I kept it all in, and after a few trips to solitary confinement for fighting and refusing to follow orders, I made friends and earned respect.

After about seven years, I did find a cathartic hobby: I started crocheting. I learned how from a pot-bellied, bald, old man named Joe who was on my tier. (If you ever read this, Joe, my bad.) I’d see him crocheting all the time and selling his finished work, and I asked him to teach me. After he said yes, I ordered about $60 worth of yarn and crochet hooks from a catalog.

I was slightly embarrassed when that first order came. Crips don’t crochet; old women in rocking chairs do. When people saw me carrying my yarn from the package room to my cell block, they asked what the crochet man was making for me. I didn’t confirm or deny why I had the materials.

Picture a 240-pound, 6-foot, 27-year-old, Black Crip crocheting in his cell. That was me. I would cover the front bars of the cell with a dark sheet to prevent other prisoners from seeing me. This worked for a while, until one of my friends knocked my curtain down. He probably thought I was smoking weed without him; I was known for doing that. When he saw me crocheting, he burst into laughter, shaking his head. He wasn’t the only friend who teased me; peer pressure exists behind these walls, too. But I laughed along with my friends and kept on crocheting. Soon, I realized that if my work was good enough, I could sell items for a profit.

Prisoners paid me mostly with commissary goods and cigarettes. Prices varied, depending on the customer. A friend got the homeboy price; others got the going rate. A baby hat, scarf and mitten set went for $50. A pillow with a name crocheted in the pattern sold for $40. The price for a stuffed animal or doll was determined by the size of it.

I didn’t sell everything I made. A lot of the men suffered from mental illness, and they would go to the yard in the winter with no hat and scarf to look for cigarette butts on the ground. Once, I made a hat and scarf set for one of them, hoping he wouldn’t sell it for cigarettes. He did try, but guys in the cell block made sure no one would buy it from him.

Looking back, turning to crocheting was the first step to changing my life. I left the gang, which meant severing ties with comrades and giving up a position I thought would have for life. It was very emotional for me, because I felt like I was abandoning my family. One night, I broke down and cried. I didn’t know where the emotion came from, but I woke up wanting to be a better man and live a simpler life.

When I crochet, I get into the rhythm of it and get into a zone. I maintain the tension of the yarn as it slides through my fingers evenly. I’ve perfected every stitch, whether it’s a double, triple double, half double crochet or single stitch.

My hobby has also helped me keep my sanity. Crocheting teaches me patience, control, humility and compassion, and it allows me to meditate on my life. When I finish a project that a fellow prisoner will give to a loved one, it feels like an accomplishment. I like knowing that whatever I make in this uncomfortable place will bring comfort to someone in society. I also take pride in creating gifts that my children will become attached to because they came from their imprisoned father.

More than two decades in, I sit, legs pretzeled, on my bunk, with my pillow and blanket propped up behind me because I have a bad lower back. My knees and hips ache, too, but I try to walk as if they don’t. I don’t put a sheet across my bars anymore. Younger guys tease me: I’m a washed up, ex-gang member who crochets. Ha! But the truth is, many of us age out of the characters we once were. Crocheting helped me spin a yarn and create a new identity — a softer one that felt better.

When guys walk by my cell and see me crocheting to Marvin Gaye and the O’Jays, they just smile and give me a head-nod. One fella recently heard me playing Jeezy while crocheting and said, “Oh shit, O. G. Crochet!” I like the nickname, though. When winter comes, it’s those same jokers who ask for a hat and scarf to keep warm in the yard.

A few years ago, one of my old gang associates landed in here with me in Sullivan Correctional Facility in Fallsburg, New York. I didn’t recognize him until he approached me in the yard. He let me know he had been watching me for over a week to see how I was moving. “What happened to you?” he asked. “Crocheting and playing Scrabble in the yard?”

At first, I got upset. Instead of embracing me as a comrade and respecting my choices, he seemed to be judging me. I shook my head in disappointment, then told him, smiling, “I’m not a gangster anymore — I crochet.”

Then he laughed, gave me a friendly hug, and said, “You done lost your mind.”

LaMarr W. Knox is a father, grandfather and crochet artist born in New York and raised in Southern California. He is serving a sentence for murder and related charges at Sullivan CF in Fallsburg, New York.

The public information office of the New York Department of Corrections did not respond to questions about past incidents by publication time.