New Orleans is not the only city where police don't get it.

On Tuesday, New Orleans Mayor Mitch Landrieu announced that the city would reopen hundreds of rape cases that went largely un-investigated by police.

The news came in the wake of a city Inspector General’s report released last week, which found that between 2011 and 2013, only 14 percent of the 1,290 sexual assault cases referred to the Special Victims Section of the New Orleans Police Department were investigated. Over 1,000 of those cases were reclassified as “noncriminal” events or given only a cursory write-up, with no accompanying investigation.

What transpired in New Orleans is common across the country, according to the research of Corey Rayburn Yung, a professor at the University of Kansas Law School and an authority on sex crimes. In March, the Iowa Law Review published Yung’s study, “How to Lie With Rape Statistics.” By looking for unusual mismatches between the number of homicide and rape reports, which historically align with one another1, he found evidence of police under-reporting of rapes in 22 percent of the 210 American cities he studied. In addition to New Orleans, those cities include Baltimore, St. Louis, and Philadelphia, where media investigations have turned up similar evidence of police reluctance to pursue rape cases.

Yung describes three ways police can undercount rape allegations: They can fail to produce a written report when a victim comes forward; they can classify rape allegations as lower-level crimes, such as assaults; or, they can declare rape allegations either “unfounded” or “false”—often after little or no investigation—which allows police departments to exclude such allegations from annual reports to the FBI.

Among the un-investigated cases in New Orleans were those of a 2-year-old child who arrived in a hospital emergency room with a sexually transmitted disease, and a woman who told a hospital nurse that her rapist was sending her threatening text messages. In the case of the toddler, a detective closed the investigation, citing a lack of evidence. In the case of the adult woman, a detective declined to submit the victim’s rape kit for testing and did not investigate her cell phone records; in a departmental log, the detective classified the sex as consensual.

The undercounting of rape is becoming more common, according to Yung. Between 1995 and 2012, he found a 61 percent increase in the number of cities providing the FBI with rape statistics that seemed suspiciously low according to his methodology. And data did not support the idea that police were simply focusing their resources on the strongest rape cases. Since 1999, the percentage of rape allegations nationwide that led to an arrest dropped from 50 to 40 percent. (In the UK, 73 percent of rape allegations lead to an arrest.)

So why the change? Yung attributes it, in part, to political pressure on police departments to demonstrate decreasing crime rates. Homicide stats are difficult to manipulate. In rape cases, “There are no dead bodies, no insurance claims,” Yung said. Rape cases are “the easiest to manipulate either consciously or through institutional approaches allocating less resources and time to it.”

But there is also a more cultural – and more controversial – explanation. Recent research from New Zealand and the UK suggests that police officers in those countries personally believe as many as a third of rape allegations are false. They simply do not trust the accusers. There is no comparable large-scale study from the United States, but a study of 76 Los Angeles sex crime detectives — 40 percent of whom had received no special training in dealing with these complex and sensitive cases — found that some regarded victims as essentially “guilty until proven innocent,” according to researchers Cassia Spohn and Katharine Tellis.

One L.A. detective said, “Because someone comes in…and says they were sexually assaulted, does not mean we have to believe them.” A number of detectives reported they were always skeptical of rape claims made by women who suffered from mental illness, who used drugs, or who were accusing someone they knew of rape. (In reality, all of those groups are more, not less, likely to be victimized, according to the Centers for Disease Control.) One officer compared such cases to the gold standard “righteous case, stranger rape. ... a real case to investigate.”

Those attitudes seem to be prevalent in the New Orleans Police Department, where there is a history of police negligence on sexual assault. In 2011, the U.S. Department of Justice issued a report detailing systemic “gender-biased policing” in the city, in which detectives failed to investigate rape cases. When police did investigate, they often interviewed victims in an accusatory manner, focusing on their sexual histories or delays in reporting allegations, the Justice Department found, writing, “The documentation we reviewed was replete with stereotypical assumptions and judgments about sex crimes and victims of sex crimes.”

For example, one woman who reported to police that her ex-husband had raped her and molested their children told the New Orleans Times-Picayune that a detective chastised her for delaying coming forward and threatened to arrest her for child endangerment. Another victim told the paper that a detective declared to her, “You can't be raped by someone you've dated.” (Her alleged rapist is currently serving a 10-year prison term.)

Two years ago, the city’s police force was placed under a federal consent decree in which the police department was given the responsibility to change its own practices on sex crime investigations and a host of other issues. Yet the attitudes and practices described in last week’s Inspector General report suggest little has changed. For example, the report says that one detective assigned to the Special Victims Section was heard on three occasions arguing that “simple rape” — committed while the victim is unable to consent due to the influence of drugs or alcohol — should not be a crime.

Does the evidence justify police skepticism toward rape victims? In 2010, a team of Boston criminologists led by David Lisak reviewed a decade’s worth of rigorous international studies on the veracity of rape allegations, including in the United States. They found false claim rates of 2 to 10 percent.

In New Orleans, however, the Inspector General report suggests 86 percent of rape allegations are essentially swept under the rug. According to Yung, that may not change without more aggressive federal oversight. That has seemed to work for colleges and universities, he says. Yung’s latest research shows that schools declared in violation of Title IX for failure to protect sexual assault victims reported a 44 percent increase in rape allegations during the time they were being audited by the Department of Education.

“That’s a positive sign because we’ve had undercounting,” Yung says. “There can be a big gap between the official story and the reality.”

which historically align with one another1Yung’s conclusions are based on the correlation between murder and other violent crimes. Historically when murder rates – regarded as reliable because bodies are hard to overlook – go up, so do the rates of other violent crimes, including rape. So in cities where murder and rape rates are closely correlated, Yung theorizes, police are more accurately reporting the number of rape allegations. The curve looks like this: 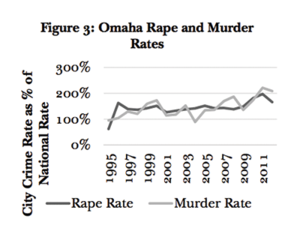 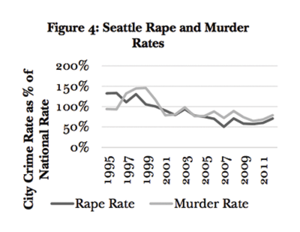 Yet in New Orleans and 22 percent of the 210 cities Yung studied, rape and murder rates were uncharacteristically out of sync, indicating that rapes were going unreported. 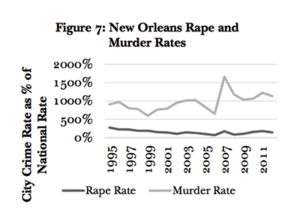